Radiotherapy plays an important role in the treatment of sinonasal cancer, mainly in the adjuvant setting after surgical resection. Many technological approaches have been described, including intensity-modulated radiotherapy, concomitant chemoradiotherapy, charged particle therapy or combined approaches. The choice is based on general criteria related to the oncological results and morbidity of each technique and their availability, as well as specific criteria related to the tumor (tumor extensions, pathology and quality of margins).

Sinonasal neoplasms represent 3% of head and neck cancers and a yearly incidence of 1/100,000 inhabitants in France. The paranasal sinuses harbor a wide variety of histologically distinct neoplasms. There are complex anatomical structures that lie in close proximity to critical structures such as optic nerves, orbits and their content (eye-ball, oculomotor muscles and nerves), optic chiasm, pituitary gland, internal carotid artery, cranial nerves and brain. The paranasal sinuses are characterized by a complex shape, air-soft tissues/mucosae-bone interfaces and are variably filled in with secretions. These characteristics are of special relevance for surgery and postoperative radiotherapy.
The majority of sinonasal neoplasms are very aggressive with 5-year survival rates of 30–60% and local recurrence as the main cause of death, but their patterns of spread and response rates to chemo- and radiotherapy vary widely [1][2]. Sinonasal neoplasms as well as the treatment of these neoplasms can lead to altered olfaction, taste, respiration, speech, vision and cosmesis. The REFCOR (Reseau d’Expertise Francais des Cancers ORL Rares) and EURACAN (European reference network for rare adult solid cancers) networks have been dedicated to improving the diagnosis and therapeutic management of sinonasal neoplasms for more than 2 decades and since 2011 for the International Rare Cancer Initiative (IRCI).
In contrast to conventional sites (pharynx and oral cavity), histologic subtypes are more varied. Squamous cell carcinomas represent 50% of sinonasal sites, intestinal-type adenocarcinomas (ITAC) 13%, mucosal melanomas 7%, olfactive neuroblastomas 7%, adenoid cystic carcinomas 7%, undifferentiated carcinomas 3% and other histologies 13% [2][3]. Oncologic outcomes also vary according to the pathology: 5-year survival rates are 50% for squamous cell carcinomas, 60% for ITAC, 30% for melanomas, 70% for olfactive neuroblastomas, 70% for adenoid cystic carcinomas and neuroendocrine carcinomas and 35% for undifferentiated carcinomas. Local relapse is the dominant pattern of failure for all histologies except melanomas, which mostly fail distantly. For example, crude local relapse rates of sinonasal squamous cell carcinomas yield 40% (5-year local failure rate of 50%), of which less than 20% are efficiently salvaged [4], and ipsilateral level Ib-IIa and upper retropharyngeal nodes are common failure sites for T3–4 cases.
Due to the non-specific symptoms, sinonasal tumors are often diagnosed late with locally advanced disease. While surgery is the mainstay of treatment in all histologies, achieving wide surgical resection with clear margins is a challenge. Resection is feasible in about 75% of sinonasal neoplasms [5][6] and only 53% of sinonasal squamous cell carcinomas [7][8]. Radiotherapy is thus usually indicated as a definitive exclusive treatment (generally with concomitant chemotherapy) when tumors are not resectable and as an adjuvant modality following surgery to optimize local control. Sinonasal tumors are indeed an example of multidisciplinarity and should be best performed at high volume centers [8][9] (Figure 1). The multidimensionality of the decision-making process is best demonstrated in borderline situations. Of those, orbital preservation best represents the compromise made to achieve acceptable oncological results while maximizing functional outcomes [10]. For example, induction chemotherapy and endoscopic-assisted surgery allowed orbital preservation in 76.6% of sinonasal squamous cell carcinomas; 96.0% of patients treated using an orbit-sparing approach maintained a functional eye after treatment [10]. 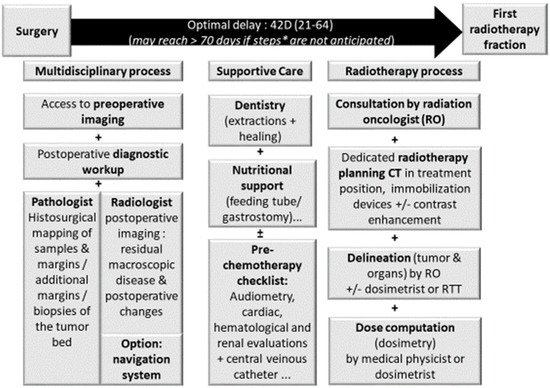 Patients with contraindications to surgery, either due to patient or tumor resectability, should receive Radiotherapy with multidisciplinary discussion of concomittant cisplatin owing to the weak level of evidence in this situation. In the postoperative setting, all patients, except those with pT1 tumors involving the infrastructure only and with negative margins [11], benefit from adjuvant radiotherapy with differential magnitude of benefit across histologies [2]. Data are lacking after endoscopic surgery to modify expert recommendation based on mostly retrospective series [2][12]; furthermore, definition of margin is less clear with endoscopic procedures, and tumor dissemination may sometimes be an issue when en bloc resection cannot be achieved. Altogether, waiting for available new data reinforces the indication of adjuvant radiotherapy post endoscopic surgery with the same indication as that of a post open surgery.
Local control is dose-dependent (requiring 60–66 Gy) but technically challenging due to close proximity of critical organs and accompanying toxicity (which is also dose-dependent with dose > 45 Gy).
Technological advances have made minimally morbid radiotherapy possible. Integration of computer science in radiotherapy and advanced linear accelerator technologies in the 1990s have led to more conformal radiotherapy, i.e., intensity-modulated radiotherapy (IMRT). This has been achieved by means of computer- and multi-leaf collimator-guided photon fluence modulation to achieve steep dose gradients. The IMRT transition was primarily driven by the improvement in radiation dose distribution with IMRT compared to conventional two-dimensional (2D) and tridimensional conformal (3D) techniques [13]. As IMRT enables delivery of adequate doses to sinonasal tumors [14] while minimizing the dose to nearby critical organs [15], benefits in terms of local control and toxicities were expected, and this technique became the standard of care.
Charged particle therapy, which includes definitive/postoperative proton therapy (or definitive carbon ion therapy), is another recognized technique for the treatment of sinonasal neoplasms [16], but available machines remain rare.

Similar or lower rate of acute toxicities not reaching significance have been observed with IMRT compared to 3D radiotherapy [20]. Fewer [6] (by about 20% compared with 3D radiotherapy) or less severe late toxicities have been reported [18][20]. Severe late radiation-induced toxicities have decreased in rate from about 50% of patients in the 1960s, 35–40% in the 1980s, and 15% in the 2000s and severe (grade 3+) to less debilitating (grade 2 or higher), yet bothersome symptoms. Historical series of conventional radiotherapy showed unilateral visual loss of up to 64% and bilateral blindness of about 2% [23]. IMRT significantly reduces the high doses to optic structures [24]. Subsequently, early IMRT studies showed major reduction of toxicities. While early IMRT series may have underestimated toxicity rates [25][26][27][28][29], other series report grade ≥ 2 late toxicities in the order of 28% [18]. Grade 2+ visual deterioration is reported in about 12–20% of patients [18][20][30][31][32]; 63% impaired olfactory function [32]; ear loss in 8–46% [5][33][34]); hormonal deficiencies in 22–62% including hypopituitarism in 24% [32][35]; cognitive dysfunction in up to 77% affecting short-term memory and speech; and fatigue in 18% [36][37]. According to Hamilton et al., sinonasal neoplasms are associated with significant symptoms during RT including pain, mucositis and dysgeusia [38].
Dose-response associations have been found between visual acuity impairment and the optic nerve and between fatigue and the temporal lobes after IMRT for sinonasal cancer but not for hypopituitarism or impaired olfactory function [32][39], possibly due to prescription dose to tumor nearby exceeding threshold dose for the given organ. Moreover, 11% of patients had structural abnormalities in irradiated areas of the brain, and impaired cognitive function was present in 63% of patients. Limited experience also suggests that quality of life (QoL) may return to pretherapeutic levels after 12 months using IMRT [18]. Impaired cognitive function as well as fatigue and insomnia were affected the most in QoL analyses [32]. Grade 3+ toxicity seems to be more likely in T4 tumors in relation to tumor stage and extensions, where compromise on tumor control may not be acceptable [18][32]. However, there seems to exist some latitude to apply stronger dose constraints to organs without jeopardizing tumor control [32].
Currently, the postoperative bed is usually irradiated at a similar high dose level without modulation on piecemeal analysis. IMRT may further allow selective dose escalation of RT to further improve outcomes. It is therefore advisable to better define, thanks to the clinico-radiological pair, the sinonasal subunits invaded by the tumor. In the meantime, some anatomical structures, for instance, involved in swallowing as late radiation-associated dysphagia, may often occur [12][40], which can be spared by dose reduction.

Charged particle therapy may better spare the organs at risk than IMRT [19][41][42][43][44] or may be used as an adjunct [34]. Despite increased sensitivity to anatomy, tumor and cavity filling change during radiotherapy of sinonasal neoplasms with protons versus photons, and organs at risk appear to receive smaller doses with proton therapy than IMRT [45] using adaptive replanning [46]. This is, however, dependent on the extent and bilaterality of tumors and may be best assessed by provisional dosimetry. Moreover, one risk of extreme conformality is geometric miss and unusual local relapse by unintentional sparing of tumor spread pathways (excess of leptomeningeal relapses have been observed after proton therapy due to better brain/meningeal sparing) [43][47].
Similar trends are observed with passive scattering compared multifield-optimized intensity-modulated proton therapy (IMPT) [19]. Limited experience with IMPT suggests that 24% experienced acute grade 3 toxicities, and 6% experienced late grade 3 toxicities (osteoradionecrosis, vision loss, soft-tissue necrosis and soft tissue fibrosis) [19]. Complication probability modelling (NTCP) can be used to inform patients of their likely outcomes.