Anemia, iron deficiency and other hematinic deficiencies are a major cause of perioperative transfusion needs and are associated with increased morbidity and mortality. Anemia can be caused either by decreased production of hemoglobin or red blood cells or by increased consumption and blood loss. Decreased production can involve anything from erythropoietin or vitamin B12 insufficiency to absolute or functional lack of iron.

“Patient Blood Management” (PBM) and “Enhanced Recovery After Surgery” (ERAS) concepts are systematic quality improving clinical models. One major part is to diagnose and reduce anemia and avoid transfusions in all kinds of clinical settings. Here, we review the potential of Reticulocyte and Erythrocyte Hemoglobin Parameters for Iron Deficiency and Anemia Diagnostics in these more and more important clinical concepts.

One important and modifiable factor affecting patients undergoing surgery is preoperative anemia. It affects more than a third of patients undergoing major surgery [1]. But even without manifest anemia, iron deficiency is an independent risk factor of worse outcomes [1]. Anemia, iron deficiency and other hematinic deficiencies are thus a major cause of transfusion needs and are associated with increased morbidity and mortality [1][2][3][4].
Iron deficiency is a major cause of preoperative anemia. But iron or other hematinic deficiencies need to be treated because they not only interfere with preoperative anemia therapy such as erythropoiesis stimulating agent (ESA) treatment, which is less effective when the iron supply is absent or insufficient, but also prevent postoperative recovery. Any blood loss because of surgery only exacerbates the problem, leading to postoperative anemia being even more common [5][6] and iron deficiency at all stages leads to a higher risk of complications.
As Anemia and iron deficiency are clinical problems that can be resolved prior to surgery, they are among the factors addressed by the ERAS concept. Patient blood management (PBM) is thus an important part of the ERAS concept and focuses on optimizing the care of patients who might need a blood transfusion [7].
The most immediate medical intervention used to counter anemia is the administration of packed red blood cells. However, use of blood products is associated with a substantial risk of complications and morbidity [8]. Consequently, patient blood management calls for tighter transfusion thresholds [9]. Transfusion itself, however, only prevents definitive diagnosis and management of anemia, again resulting in negative consequences for patients recovering from surgery. Thus, to achieve the goal of patient blood management, anemia has to be taken out of the equation by addressing its causes.
During a hospital stay, 25% of patients develop relevant anemia [10]. This is called Hospital-Acquired Anemia (HAA). It is very common that patients having normal hemoglobin values upon admission develop anemia over the course of hospitalization [11]. The incidence ranges from approximately 25–75% prior to discharge using the nadir hemoglobin values during hospitalization. Potential etiologies for HAA are iatrogenic blood loss from phlebotomy [12][13][14][15][16] or “anemia of chronic disease” induced by acute phase reactions stimulated by interleukins activating hepcidin synthesis [17][18][19]. HAA has been postulated to be a hazard of hospitalization that is potentially preventable [2]. Early diagnostic of anemia in critical care units is needed, to differentiate between HAA and other causes of anemia.

Anemia is defined by the World Health Organization (WHO) as a decrease in hemoglobin concentration in the blood below certain sex- and age-specific levels—specifically <13 g/dL (8 mmol/L) for men, Hb < 12 g/dL (7.4 mmol/L) for women and <11 g/dL (6.8 mmol/L) for pregnant women [20]. There is, however, some discussion as to whether the statistically lower average concentrations of HGB in women indeed justify a distinct lower reference limited and do not in fact describe conditions that should better receive treatment.
Anemia can be caused either by decreased production of hemoglobin or red blood cells or by increased consumption and excessive blood loss or red blood cell destruction. Decreased of production can involve anything from erythropoietin or vitamin B12 insufficiency to absolute or functional iron deficiency.

Reticulocyte hemoglobin (measured as RET-He or CHr, proprietary names of the manufacturers of haematology analyzers Sysmex (Kobe, Japan) and Siemens Healthineers (Erlangen, Germany), respectively) [21][22] is a measurement of the mean hemoglobin contained in reticulocytes, the immature red blood cells freshly released from the bone marrow. RET-He (reticulocyte hemoglobin equivalent) is derived from forward scatter of the reticulocyte population identified in the optical RBC scattergram. These are the cells with the highest side fluorescence obtained by a nucleic acid stain. As reticulocytes are the direct products of erythropoiesis, they offer an almost immediate snapshot of the availability of iron, and as they mature within a few days, they are not drowned out by older cells produced during a different iron status as is the case for mature red blood cells. The reticulocyte count itself is a good parameter for the quantitative aspect of erythropoiesis, but hemoglobinization of reticulocytes gives additional information about quality of erythropoiesis directly reflecting the hemoglobinization. RET-He can thus detect a latent subclinical iron deficiency even before the manifestation of full iron deficiency anemia [23][24]. As it directly reflects the erythropoiesis, the parameter is not confounded by acute phase reaction [25][26]. It responds quickly (within about 2 days), is accurate [27], and is inexpensive, as it is part of a blood count from specific proprietary hematology analyzers. This makes it a much more practical and available solution for measuring iron availability to erythropoiesis than the reference method involving bone marrow aspiration and Prussian-Blue staining. The two main parameters of reticulocyte hemoglobin measurement have been shown to be highly correlated and concordant [22][28] and can be used independently of the specific solution mentioned in guidelines.
While it has long been known that anemia is associated with the need for blood transfusion and greater mortality in surgical patients, it has more recently been shown that the same holds true for critically ill patients with low mean reticulocyte hemoglobin (<29 pg) [29].
But what role can reticulocyte hemoglobin play in anemia diagnostics?
The use of reticulocyte hemoglobin, possibly plotted against an index calculated from sTfR/log ferritin (Figure 1), if other clinical chemistry parameters are desired despite the drawbacks mentioned, was proposed by Thomas & Thomas [25] as far back as 2002, with the goals being to distinguish between absolute and functional iron deficiency and to track iron repletion. It thus stands to reason that reticulocyte hemoglobin should also be able to play a role as a more accurate, sensitive, timely and inexpensive option to know which anemia to treat with iron.

Figure 1. Modified Thomas plot [25]. Characterization (A) and monitoring (B) of anemia based on reticulocyte hemoglobin and the sTfR/log ferritin index. In (B), an initial functional iron deficiency (1) is first treated with ESA and i.v. iron therapy (2). Subsequent focus on ESA therapy leads to reduction of storage iron to a borderline level, while hemoglobinization of reticulocytes is still normal (3), Ret-Hb = Ret-He = mean reticulocyte hemoglobin.

In patients with renal anemia, especially those undergoing hemodialysis, although the cause of anemia is generally an EPO deficiency, secondary ACD can still lead to iron-restricted erythropoiesis and interfere with therapy. Ferritin values can be normal or elevated, even when no iron is available. Reticulocyte hemoglobin measurement can show that iron is functionally deficient and not arriving in the bone marrow [30][31]. In this case, guidelines then recommend intravenous iron for dialysis patients. Reticulocyte hemoglobin can subsequently be used to track recovery of the iron supplied to erythropoiesis (Table 1) [31][32].
Table 1. Evaluation of iron deficiency in chronic kidney disease.

Diagnosis of postoperative iron deficiency can be even more difficult than that of preoperative deficiency since ferritin levels may be elevated as part of the acute phase response after surgery [33]. As a result, RET-He is recommended as a reliable parameter to assess iron availability in the management of patients with postoperative anemia after major surgical procedures [5]. Even in acute surgical patients, removing any bottlenecks can help prevent major postoperative complications, and giving iron one day before or even during surgery has been shown to improve postoperative erythropoiesis [34][35]. Therapeutic interventions to counteract the anemic condition should be started immediately upon classification and RET-He can help show whether iron or ESA are needed. In some cases of severe anemia, especially in the presence of comorbidities, transfusions may of course still be necessary. For iron treatment, intravenous iron is generally indicated, as an inflammatory response to the surgery is likely to prevent the availability of iron stores postoperatively.
The use of reticulocyte hemoglobin can provide an inexpensive snapshot of the status of erythropoiesis, ensuring that even latent iron deficiency is recognized before surgery. Measures to mitigate the iron deficiency can then be implemented in a timely fashion, thereby also reducing the risk of adverse events due to RBC concentrate treatment during surgery.

For Germany alone, modelling suggests that in the context of iron deficiency anemia, implementation of rigorous preoperative anemia management could save €536 million in direct costs and a further €503 million through reduced length of stay of elective surgery patients, for a total of more than €1000 million, at the same time avoiding 3036 hospital deaths. Meanwhile, the costs of implementing preoperative anemia management were estimated to be €10–17 million, depending on the iron dosage used [36].
However, the preoperative management of anemia in the context of Patient Blood Management is currently practiced in a very heterogeneous way, even in countries with highly developed healthcare systems [37]. Lack of knowledge and awareness about the impact on outcomes of anemia and iron deficiency, and the complicated pathway to assess and treat anemia, may be a contributing factor. Reticulocyte hemoglobin content or equivalent, on the other hand, could be incorporated into routine preoperative evaluation with a regular blood count, without requiring additional blood samples and only minimal added costs, providing invaluable information on most causes of anemia, and facilitating management. It therefore has the potential to become a fixed parameter in PBM and ERAS.

8. Potential Role of Ret-He in Treatment of Iron Deficiency in Septic Patients

Iron is a key factor in microbial growth and the downregulation of iron uptake and transport by hepcidin thought to be part of an immune response [38]. Consequently, there are some who oppose iron treatment in sepsis patients for fear of facilitating microbial growth, preferring to use packed red blood cells when anemia becomes critical. However, not only are some bacteria not affected by this type of iron restriction, but some are also capable of using heme as a source of iron [39], making transfusion in that aspect functionally similar to iron therapy. Moreover, erythrocyte concentrate therapy is independently associated with a significant risk of complications and mortality. The question arises as to whether reticulocyte hemoglobin, perhaps in association with other parameters, could help fine-tune iron treatment so that it meets the needs of the bone marrow but avoids fostering bacterial growth. Tracking iron replenishment in erythropoiesis by comparing the hemoglobinization of the mature erythrocytes, measured through the same technology as that of the reticulocytes, may indicate when iron therapy can be stopped, but also illustrate that iron is being sequestered in the first place. The corresponding parameter for this difference has been dubbed Delta-He by Sysmex. It is calculated by subtracting RBC-He from RET-He. RBC-He is the haemoglobin content of erythrocytes and therefore roughly comparable to MCH but measured with the same technique as RET-He. Together with reticulocyte hemoglobin, it can also be used to obtain a much more differentiated assessment of anemia, as certain constellations are characteristic for different underlying causes [40] (Figure 2). 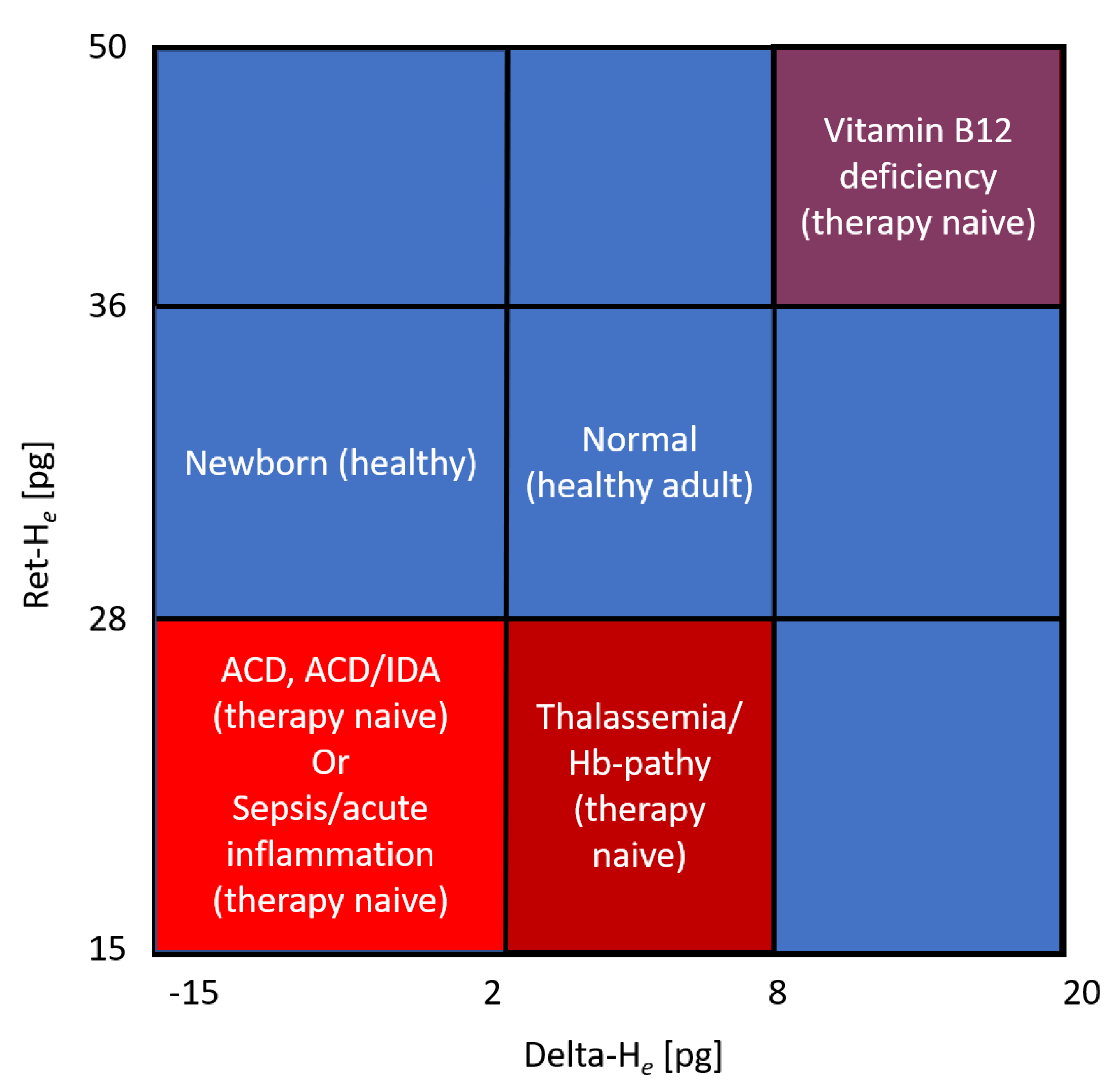 Figure 2. Hema-plot (adapted from Weimann et al. [40]) Characterization of anemia based on reticulocyte hemoglobin (RET-He) and the difference between it and the hemoglobinization of mature erythrocytes (Delta-He).