Reverse total shoulder arthroplasty (RTSA) is increasingly used for the treatment of complex proximal humerus fractures and fracture sequelae. In 2021, half a dozen models of fracture stems are commercially available, reflecting its growing utility for fracture management. Prosthesis designs, bone grafting and tuberosity fixation techniques have evolved to allow better and more reliable fixation of tuberosities and bony ingrowth.

Proximal humerus fractures are common injuries in adults, representing the third most common fracture in patients older than 60 years of age [1]. The majority of these fractures can be treated non-operatively with a high likelihood of an acceptable clinical outcome. Fractures complicated with head split or dislocation are generally treated operatively [2][3]. The management of 3- and 4-part fractures that are significantly displaced remain an area of significant variability in management, and a source of ongoing controversy [4][5]. Evidence from a multicentre randomised controlled trial suggests equivalent outcomes from open reduction and internal fixation (ORIF) or hemiarthroplasty to non-operative management in patients without a clear indication for surgical intervention [6]. There is evidence to suggest that reverse total shoulder arthroplasty (RTSA) can provide reliable functional outcomes for these displaced 3- and 4-part fractures [2][7], or even as a salvage procedure for failed ORIF [2][8]. However, RTSA for fracture is less reliable than in the cuff deficient shoulder [9][10][11]. Despite this, there has been a progressive increase in the use of RTSA for fracture management over the last decade [12][13]. The aim of this entry is to gather some of the existing literature on the different tuberosity fixation techniques and prosthetic designs of RTSA that can influence outcomes in fracture management.

Reverse prostheses have since undergone changes to address some of the problems seen with the original design. These changes aim to create a more lateralised prosthesis. Much of the focus on this lateralisation has been on modifications to the humeral stem [14][15][16][17][18][19]. The humeral neck-shaft angle of 155° was more likely to impinge on the scapula due to the reduced adduction angle. Implants with more anatomical humeral angles of 135° and 145° produced large gains in adduction and external rotation [18], and were less prone to scapular impingement [15].

Decreased neck-shaft angles have been combined with an onlay proximal interface in some systems. An inlay implant sits within the metaphyseal bone at the proximal component, requiring more extensive reaming. An onlay proximal interface sits on top of the neck cut, which theoretically allows for preservation of proximal bone stock including tuberosities [20]. The onlay system results in a more lateral displacement of the humerus, which produces increased tensioning of the rotator cuff and deltoid muscle efficiency [21]. In a recent study, there was an increased adduction angle and decreased notching with the onlay design compared to an inlay design [22].

Lateralisation can also be achieved at the glenoid side using increased sized or eccentric glenospheres, which leads to increased humeral offset, or lateralised baseplates or bony increased offset-reversed shoulder arthroplasty (BIO-RSA), which leads to increased glenoid offset [23][24][25]. In non-fracture settings, these designs have been shown to compensate for problems seen with the original Grammont design by significantly improving external rotation [26][27][28] and reducing notching [23][24][29][30]. However, some of these design features may be associated with increased rates of acromial/scapular stress fracture [29] and glenoid loosening [31]. The influence of lateralisation at the glenoid side in fracture management and tuberosity healing have not been described in the literature thus far. In addition, there are some inherent dangers in extrapolating the cuff arthropathy implant design literature to the fracture cohort. Glenoid medialisation and bone loss are common in cuff arthropathy, but in the vast majority of fractures, the glenoid is normal without medialisation. This is relevant to the use of implants with either glenoid and humeral lateralisation and achieving optimal implant position.

Recently, there have been various design modifications that have been implemented to accommodate the challenges that are specific to proximal humerus fractures. Fracture stems have variable combinations of bony windows within the metaphyseal component, thus allowing bone graft, hydroxyapatite or porous coating for anatomical fixation, a lateral flange for positioning of tuberosities, and medial calcar holes for suture passage ( Figure 1 ). These innovations are intended to allow osteointegration between implant and tuberosities [32]. Depending on the bone quality and implant design, fracture stems can either be implanted in a traditional cemented technique or cementless with a press-fit technique [33]. In a recent meta-analysis looking at outcomes of fracture stems versus non-fracture stems in proximal humerus fractures, fracture stems were shown to result in significantly improved functional scores, external rotation and forward flexion as well as tuberosity healing [34].

Reconstruction of displaced tuberosities should be attempted to enable maximal (inter) fragmentary stability. Along with implant characteristics, several fixation techniques have been developed to impart satisfactory reattachment of the tuberosities [32][35][36][37][38]. Some studies have focused on stem-based fixation of tuberosities [39][36][40] while others have explored bone grafting [41][42][43][44][45] and suture techniques [35][38][46] to secure the tuberosities to the humeral stem. Cemented humeral fixation has not improved tuberosity healing, but has led to worse patient-reported outcomes [47][48].

The most popular technique of tuberosity fixation is the use of cerclages. Double suture loop cerclage techniques have been shown to be up to three times stronger than single-stranded knots in an in vitro study. Of the 12 different knots tested, the cow hitch technique was the stiffest and strongest, followed by the Nice Knot [49]. The Double Suture Nice Knot has been suggested for fixation of the greater tuberosity after acute fracture, non-union or malunion. The technique creates a sliding knot that is self-stabilising, simple and strong ( Figure 2 ). No studies have been performed on the reliability of the Nice Knot in greater tuberosity fixation, although it has been shown to be a safe and effective fixation method in comminuted clavicle fractures [50], and displaced patella fractures [51]. Further studies are recommended to test this fixation technique for greater tuberosity in complex proximal humerus fractures. 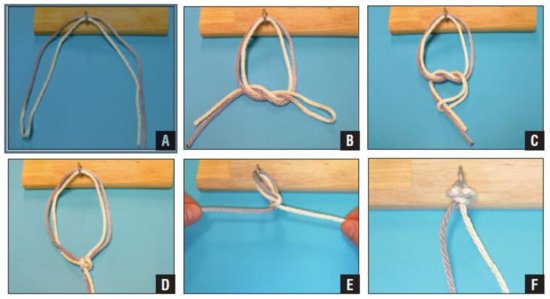 Figure 2. Nice Knot technique. (A) A double-over suture is threaded around the tissue. (B) A single square knot is thrown. (C) The two free limbs are passed through the loop. (D) The knot is dressed. (E) The knot is tightened by pulling the two free limbs apart. (F) Three half-hitches are applied to secure the knot. Reprinted with permission from [52]. Copyright 2017. SLACKR.

Grubhofer et al. recently adopted a cow hitch suture technique ( Figure 3 ) specifically for tuberosity fixation in RTSA and hemiarthroplasty in a cadaveric study [35][53]. The cow hitch suture cerclage as a stem-based suture technique using ZimmerBiomet (Warsaw, IN, USA) stems produced a significantly more stable fixation than a previously described technique by Frankle et al. [54]. The cow hitch cerclage knot utilises a self-locking mechanism, which is thought to maintain better fixation stability than the conventional knots [35][53]. The use of a tensioning device, whilst tightening the applied cerclage sutures for tuberosity fixation, has also been shown to enhance biomechanical stability and reduce rotational movement of the attached tuberosities [55]. These biomechanical results are promising and warrant further clinical studies. 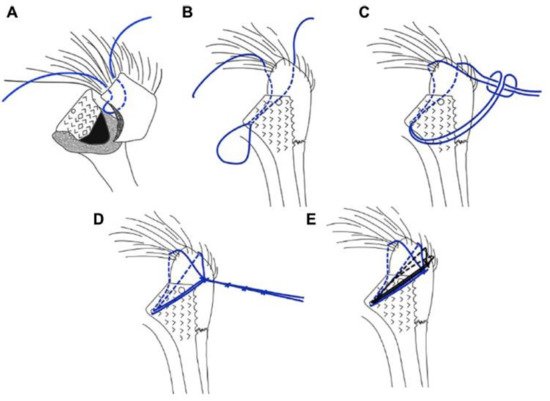 Figure 3. Illustration of the cow hitch technique. A suture loop is created intra-articularly at the tendon-bone interface of the in-fraspinatus (A). The loop is passed through the medial calcar hole of the prosthetic stem (B). Two loops are created by folding the loop twice (C) and the two free limbs are fed through the double loop (D), creating a self-locking mechanism. A second ‘cow hitch’ is thrown (E). Reprinted with permission from [35]. Copyright 2021. Elsevier.

Takayama et al. also introduced a turned stem tension band technique in 18 patients with complex humerus fractures. The technique utilises ten sutures, five of which turn counter clockwise while the other five turn clockwise around the stem. Of the five counter clockwise sutures, two are applied to the teres minor muscle and three to the infraspinatus tendon. The other five clockwise sutures are applied to the subscapularis muscle ( Figure 4 ). The technique yielded a 100% tuberosity healing rate over a 34.5-month follow-up [46]. Furthermore, Formaini et al. introduced the black and tan technique, which utilises vertical, horizontal and cerclage sutures to allow the integration of bone graft between the cement mantle and proximal extent of the humeral shaft. It yielded an 88% tuberosity healing rate in 25 patients [38]. These techniques may be simple and reproducible tuberosity fixation methods in theory, but require a period of familiarisation as they can be challenging intraoperatively. 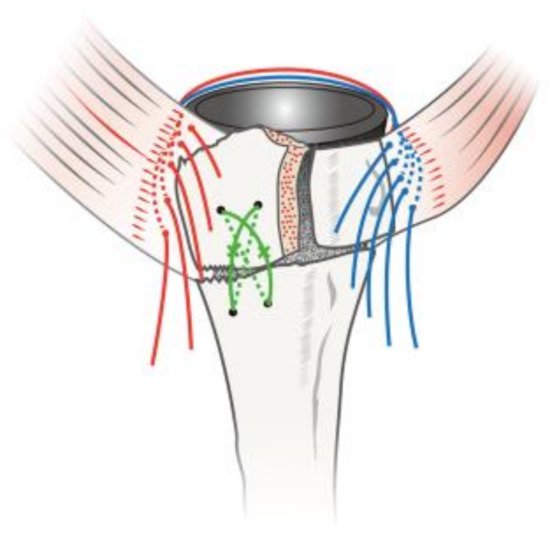 RTSA represents a good surgical option in complex proximal humerus fractures in the elderly population with tuberosity comminution, a head split component, fracture-dislocation and risk factors for rotator cuff pathology and non-union. It offers reliable pain relief and a good range of motion with a low revision rate. Anatomic reduction and secure tuberosity fixation with bone graft augmentation should be attempted in all cases as a good union can result in superior functional outcomes with lower complication rates. The use of a fracture-specific stem appears to improve tuberosity union rates. Suture techniques, stem-based fixation techniques, fracture-dedicated implants and the use of bone grafting and cement continue to evolve.