B Cell Lymphoma 2 and Cancer Therapy

Bcl-2 is an anti-apoptotic protein that is associated with several cancer progression. Bcl-2 was the first protein to be documented among the Bcl-2 family proteins. It was the first gene exhibited to promote prolonged cell survival and growth rather than enhanced proliferation, which revealed that inhibition of cell death is vital in tumorigenesis.

Bcl-2 is an anti-apoptotic protein that is associated with several cancer progression [1][2]. Bcl-2 was the first protein to be documented among the Bcl-2 family proteins [3]. It was the first gene exhibited to promote prolonged cell survival and growth rather than enhanced proliferation, which revealed that inhibition of cell death is vital in tumorigenesis [4]. Bcl-2 represses apoptosis by inhibiting cytochrome c ( cyt- c ) release from the mitochondria, preventing activation of caspases responsible for apoptosis [5]. Elevated expression of Bcl-2 is involved in many cancer progressions [6]. The increased expression of Bcl-2 is linked with advanced stage neoplasms and poor differentiation [7]. Bcl-2 plays a vital role in angiogenesis and cancer growth [8]. Apoptosis is the most important mechanism of cell death in response to tumor therapies [9]. Targeting the Bcl-2 protein may improve apoptosis by chemotherapeutic agents [10][11]. Bcl-2 inhibitors have exhibited promising effects in several malignancies with a single drug and combination with other drugs since Bcl-2 is a potential therapeutic target for malignancies [12].

Bcl-2 is the most significant protein, its overexpression and phosphorylation may be linked to regulation of cell growth, cell cycle, proliferation, DNA repair, and tumorigenesis. Elevated expression of Bcl-2 protein has been found in several human cancers [13][14]. Bcl-2 participates in an oncogenic function via survival signaling pathways and its role on the mitochondrial membrane. Several signaling molecules regulate Bcl-2. The phosphorylation of Bcl-2 on Ser70 through growth factor-activated protein kinases triggers the anti-apoptotic function of Bcl-2 [15][16]. p53 regulates Bcl-2 family proteins and hence controls mitochondria-mediated apoptosis [17]. p53 is a controller of the expression of the Bcl-2 gene. It increases Bcl-2 protein expression [18][19][20]. Overexpression of Bcl-2 showed more activation of signaling molecules in pancreatic cancer cells [21]. Signaling pathways play a major role in controlling the Bcl-2 family of proteins that initiates cell growth/survival via activation of Bcl-2 [22][23].

Here, this review article highlights the present findings on the role of Bcl-2 in the progression of various cancers and its significance as a therapeutic target. We also discussed a comprehensive study of Bcl-2 inhibitors as a therapeutic target for cancer therapy. This investigation summarizes the potential of Bcl-2-inhibitors in the treatment of cancer and novel plans to utilize these inhibitors in pre-clinical and clinical trial applications.

Apoptosis is the complex and fine-regulated appearance of programmed cell death. It takes part in vital functions such as embryogenesis, immunity, tissue development, and maintenance of homeostasis. Hence, excessive or insufficient cell death may lead to many pathological conditions like cancer [24][25]. Apoptosis is an important program of a living cell [24][26]. Two pathways initiate apoptosis, the extrinsic pathway and the intrinsic pathway ( Figure 1 ). The extrinsic pathway starts with the activation of particular death receptors and ligand receptors. These ligands contain Apo2L/TRAIL and CD95L/FasL, which bind with DR4/DR5 (TRAIL-R1/R2) and CD95/Fas [27]. The intrinsic pathway of apoptosis is primarily triggered via the Bcl-2 family proteins [28]. Bcl-2 family proteins participate in p53-mediated apoptosis, which interacts with the Bcl-2 family proteins, reduces the mitochondrial membrane permeabilization (MMP), and releases cyt-c that activates caspase-9 [29][30][31][32]. The cyt- c and Apaf-1 binding activate pro-caspase-9, forming an “apoptosome” [33]. Both pathways activate caspase-3 and follow the apoptosis pathway ( Figure 1 ) [34]. 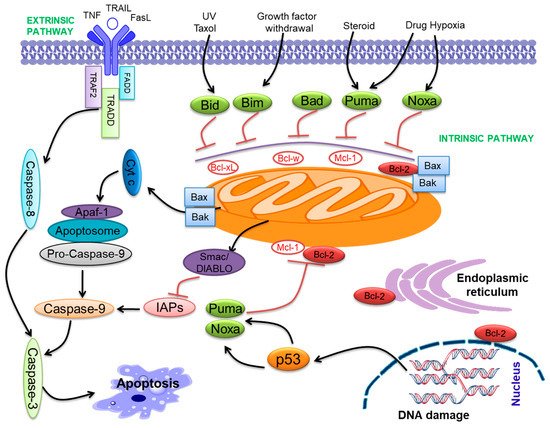 Figure 1. The intrinsic and extrinsic pathways of apoptosis. The two pathways that initiate apoptosis are the extrinsic (or death receptor initiated by ligand binding and subsequent activation of caspase-8) pathway and intrinsic pathway (driven by Bcl-2 family proteins, release cyt-c and activation of caspase-9) of apoptosis. Both pathways lead to a common apoptosis pathway by activating caspases-3, -6, and -7, triggering apoptosis. Bcl-2 family proteins are primarily localized to mitochondria and present on the ER and the perinuclear membrane in hematopoietic cells.

The oncogenic perspective on Bcl-2 was primarily proposed in 1988 by Reed et al. utilizing gene transfer technology [52]. Bcl-2 gene rearrangements were explained to be linked with reduced prognosis in large-cell non-Hodgkin’s lymphomas (NHL) [53]. The study of chromosomal rearrangements, which occur in human cancers, has been the most potent and exciting approach for analyzing the molecular systems that trigger tumor cell growth. The examination of the t(14:18) translocation breakpoint and the finding of the Bcl-2 gene had a unique impact on our thoughts on fundamental cell biology in malignant and normal cells [54][55][56]. Moreover, t(14:18) chromosomal translocations were observed via PCR in several normal individuals [57][58]. The Bcl-2 proto-oncogene was initially cloned from the t(14;18) translocation breakpoint in human follicular B cell lymphoma [3]. It is encoded by the Bcl-2 gene in the case of the human genome, and it is specified as an oncogene [56]. It was identified due to its involvement in t(14;18) chromosomal translocations examined in non-Hodgkin’s lymphomas [56]. In translocations t(14;18), the Bcl-2 gene is present on chromosome 18, which becomes combined with the immunoglobulin heavy-chain (IgH) locus present at chromosome 14.

Effects in transcriptional activation of Bcl-2 gene and the over-production of its protein occur in B-cells. Hence, Bcl-2 was expected to present another growth-inducing oncogene while it appeared to start the translocation breakpoint sequence. Bcl-2 was established to increase cell growth and obstruct cell death [3][59]. A study of experimental retrovirus-induced Bcl-2 overexpression in the mouse bone marrow cells showed that Bcl-2 over-expression alone could not be sufficient for tumorigenesis [3][59]. Increased Bcl-2 protein expression can certify the perseverance of a cell clone through the more active Bcl-2 gene, awaiting promotion of tumorigenic alterations or mutations appearing in the result. The introduction of the cDNA of Bcl-2 in IL-3-dependent lymphoid and myeloid cells endorsed cell growth in the absence of the cytokine by the cells being sustained in a G0 position [3][59]. Experiments among transgenic mice, which overproduced Bcl-2 in B-cells, have powerfully confirmed the theory that inhibition of apoptosis characterizes one of the crucial steps in the process of tumorigenesis credibly [60][61]. The results achieved with mouse models are similar to the detected impact of the expression of Bcl-2 in cancers. Chromosomal Bcl-2 translocations affecting overexpression of protein are observed in follicular center B-cell lymphoma and CLL. These cancers are benign and consist of primarily quiet, non-cycling cancer cells [62][63]. 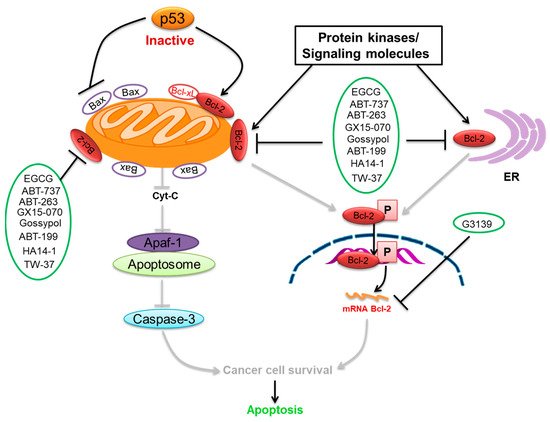 Figure 2. Bcl-2-mediated apoptosis cascade and the mechanism of action of inhibitors. Over-expression of Bcl-2 might be blocked and inhibited through Bcl-2 inhibitors. Inhibitors block cancer progression by targeting signaling molecules or protein kinases that abrogate Bcl-2 expression and decrease the expression of Bcl-2 by inhibiting cell growth and proliferation and initiating apoptosis.
Table 1. Bcl-2 inhibitors are used for the therapeutic targeting of several cancers.

Epigallocatechin-3-gallate (EGCG) is the most abundant and closely examined polyphenol in green tea [84][85]. The chemotherapeutic effects of EGCG have been documented against various cancers [86][87][88]. EGCG alters and inhibits the Bcl-2 family protein ratio and activates caspases in cancer cells [89][90][91]. It has anticancer effects that increase Bax and Bak and decrease Bcl-xL and Bcl-2, initiating activation of caspases-9 and inducing cell death in SCC cancer cells [92][93]. EGCG leads to down-regulation of Bcl-2 and Bcl-xL [94]. The interaction of EGCG with p53 disrupts p53 with its regulatory E3 ligase MDM2. It reduces the ubiquitination of p53 through MDM2, since EGCG interrupts the binding of p53 for its regulator MDM2, stabilizing p53 through blocking p53 ubiquitination as well as degradation [95]. EGCG was documented from a library of some 2295 phytochemicals as an inhibitor of p53 with MDM2 interaction [96].

ABT-737 is a potent inhibitor of Bcl-2 and Bcl-xL [97], and its application in cancer therapeutics has been observed [69]. ABT-737 has its effect on activating caspase-3, leading to cell death. ABT-737 up-regulates pro-apoptotic Noxa expression via synergistic combination with chemotherapy [69]. ABT-737 binds with a very high affinity to Bcl-xL/Bcl-2 because of their similar structure [70]. Hence, Bcl-2 is inhibited due to the binding of ABT-737 in its hydrophobic groove, which relocates any bound pro-apoptotic BH3-containing proteins [70]. ABT-737 stimulated the caspase-3 activation as well as cleavage of PARP, which induced cell death. ABT-737 decreased the activation of Akt expression, which is involved in this signaling pathway in the inhibition of gastric cancer cell growth. p53 was observed to be linked to the effect of ABT-737 as well as naringenin in gastric cells [98]. Data showed ABT-737 and epothilone B caused a blockade of the signaling pathways that could synergistically stimulate apoptosis and anti-proliferation in human cancer cells [99].

ABT-199 (Venetoclax) is a promising and selective inhibitor of Bcl-2 protein, which has exhibited clinical efficacy in multiple hematological cancers [100]. ABT-199 is an inhibitor that exclusively maintains binding for Bcl-2 [101]. ABT-199 efficiently stimulates cell death in Bcl-2-dependent cancers without inducing thrombocytopenia. A single dose of ABT-199 stimulated cancer lysis syndrome in leukemia, showing potent anticancer action in vivo in humans. It is presently one of the most stimulating drugs for hematological cancers in clinical progress. Due to the important function of Bcl-2 in B-cells, clinical studies with ABT-199 presently concentrate exclusively on hematological cancers. A selective inhibitor of Bcl-2 can induce apoptosis. SCLC exhibits an elevated expression of Bcl-2 and can be liable to single-drug treatment by ABT-199. Through overexpression of Bcl-xL, ABT-199 showed pre-clinical trial activity in breast cancer cells [74] by investigation of the promise of ABT-199 as a Bcl-2 inhibitor.