MNT (MAX’s Next Tango) is a crucial modulator of MYC, controls several cellular functions, and is activated in most human cancers. It is the largest, most divergent, and most ubiquitously expressed protein of the MXD family. MNT was first described as a MYC antagonist and tumor suppressor. Indeed, 10% of human tumors present deletions of one MNT allele. However, some reports show that MNT functions in cooperation with MYC by maintaining cell proliferation, promoting tumor cell survival, and supporting MYC-driven tumorigenesis in cellular and animal models. Although MAX was originally considered MNT’s obligate partner, it is also known that heterodmerize with MLX. Recent findings demonstrate that MNT can also work independently, as MNT forms homodimers and interacts with proteins both outside and inside of the proximal MYC network, as REL. These complexes are involved in a wide array of cellular processes, from transcriptional repression via SIN3 to the modulation of metabolism through MLX as well as immunity and apoptosis via REL.

The discovery of MNT (MAX’s Next Tango) was reported by two independent laboratories in 1997. One group found MNT through a two-hybrid screening in yeasts using a murine cDNA library with MAX as the bait [1], while the other group isolated MNT (originally called ROX) in a search for transcribed sequences of the human chromosome 17p13.3 [2].
The MNT transcription factor belongs to the MXD family (originally called MAD), which shares a basic helix–loop–helix–leucine zipper (bHLHLZ) domain as well as a SIN3 interaction domain (SID) (Figure 1). 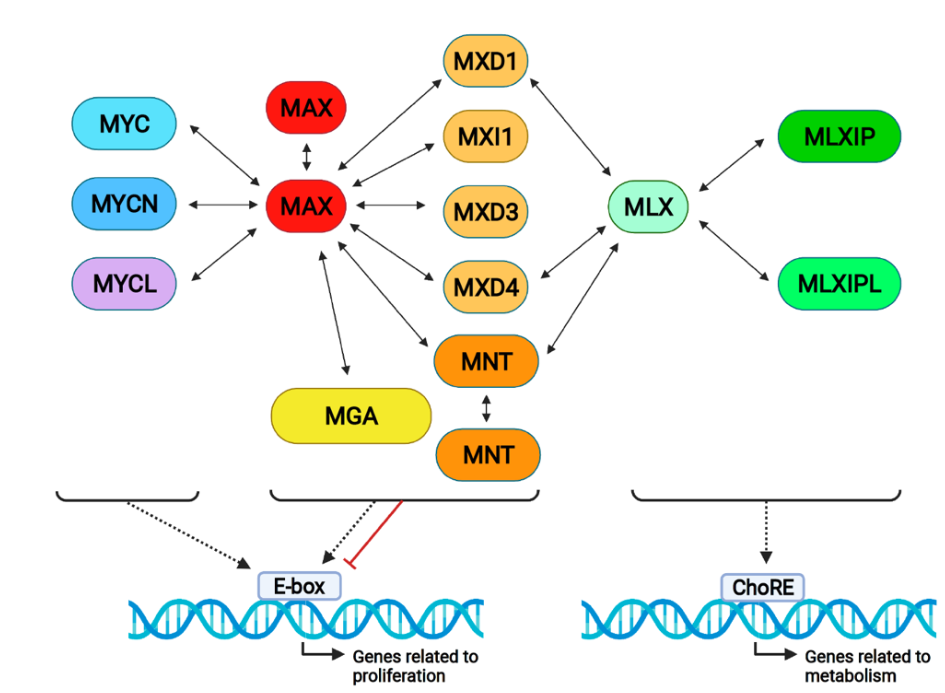 Figure 1. The proximal MYC network and its interactions. MYC proteins form dimers with MAX and bind DNA on E-boxes, generally activating transcription. All MXD proteins bind to MAX and MXD1, and MXD4 and MNT also bind to MLX, activating or repressing gene transcription. MLX forms complexes with MLXIP (MONDOA) and MLXIPL (MONDOB), binding on ChoRE (carbohydrate response elements) and regulating metabolic genes. Notably, MAX and MNT form homodimers, as
represented in the Figure.
The bHLHLZ is necessary for forming dimers with MAX and for binding to DNA on E-boxes (Enhancer-boxes). The SID establishes the interaction with SIN3 proteins, facilitating transcriptional repression (see below) [3][4]. Notably, the SID repressor domain linked to Cas9 has been described as an efficient tool in CRISPR-mediated repression of targeted genes [5]. The canonical MXD proteins are MXD1, MXI1, MXD3, and MXD4. There is yet another member, MGA [6], that shows little similarity with the other MXDs, as it lacks the SID but binds to MAX through its bHLHLZ domain. MGA is a very large protein (3065 amino acids) and besides the bHLHLZ, it contains a T-box domain, which is described in Brachyury proteins and is a characteristic of the TBX (T-Box) transcription factor family. Its structure allows the regulation of both MAX-network and T-domain target genes, either as an activator or repressor [6][7][8]. Inactivation of MGA is frequent in human cancer, and a recent study has demonstrated that MGA functions as a tumor suppressor in murine models of lung carcinoma and in colorectal cancer organoids, partly due to the de-repression of MYC target genes [9].
MNT is a unique member of the MXD family due to several features; it is (i) the largest protein of the family; (ii) the most divergent gene in its sequences; (iii) ubiquitously expressed in human tissues; (iv) essential for mouse development; (v) expressed in both quiescent and proliferating cells; (vi) altered in human cancer; and (vii) is frequently involved in tumorigenesis (Table 1). It also plays an important role in modeling the oncogenic activities of MYC, as an antagonist in some models or as a cooperator in others (reviewed in [10]).
Table 1. Main differences between the human MNT, other human MXD proteins,  and MYC. The sizes of the proteins are the largest canonical forms, according to the UniProt database. Aa, amino acids; ND, not done; DEL, deletions; AMP, amplifications; MUT, mutations; CTCL, Cutaneous T-cell lymphoma; MB, medulloblastoma; SS, Sezary Syndrome; ALL, acute lymphoblastic leukemia.
* central nervous system, epidermis, and the myeloid lineage.
MNT is evolutionarily conserved, an argument for its relevant role in cell biology. It is the sole MXD protein identified in the fly Drosophila melanogaster [23]. Flies express a “minimal” network composed of dMax, a single MYC protein (dMyc), and a sole MXD protein (dMnt). In general, MNT and MXD1 are present along the phylogenetic tree, whereas the other MXD are only present in vertebrates (reviewed in [15]). Interestingly, dMnt is recruited to a higher number of Drosphila genes than dMyc is [24]. MNT orthologues are found in primitive pluricellular organisms from the Cnidaria (Hydra spp., Nemastotella spp.) and Placozoa (Trichoplax spp.) phylum [25]. In contrast, the nematodes C. elegans, C. briggsae, and Brugia malayi lack MNT or MYC orthologs. However, these species, together with the trematode Schistosoma mansoni, present orthologs for MAX, MLX, MXD, and MLXIP [15][25][26].
In contrast to the other members of the MXD family, MNT is an essential protein during development, as Mnt knockout mice die soon after birth [11][27]. Mice with null homozygous deletions for Mxd1, Mxd2, or Mxd3 show different defects [12][13][28] but survive to adult ages. Mnt-deficient embryos exhibit small size throughout development and, interestingly, show reduced levels of c-Myc and N-Myc [11]. Mnt-overexpressing embryos also have developmental defects, are of a smaller size, and have decreased cellularity [1]. These data suggest that a tight control of MNT levels is necessary for the correct development.

MNT has been classified both as an oncogene or as a tumor suppressor gene based on its diverse activities in the cells. The data arguing that it behaves as tumor suppressor gene can be summarized as follows: (a) the tissue-specific loss of Mnt in mouse models results in thymic lymphoma [29] or mammary tumors [27][30] (discussed below in point 7.1); (b) MEFs deficient in Mnt proliferate faster than wild-type cells and prematurely enter into the S phase [27] (discussed below in point 7.1); (c) in a pan-cancer study of The Cancer Genome Atlas (TCGA) data, heterozygous MNT deletion was found in 10% of the tumors (overall frequency) and in more than 20% of liver hepatocellular carcinomas, lung adenocarcinomas, sarcomas, and uterine carcinosarcomas [16].
The MNT locus at chromosome 17p13.3 is a hot spot for the loss of heterozygosity (LOH) in tumors such as sporadic breast cancer, medulloblastomas, or chronic lymphocytic leukemia (CLL) [21][31][32][33] as well as in ovarian cancer [34], astrocytomas [35], bladder cancer [36], or osteosarcoma [37]. However, no inactivating mutations in MNT have been found in these tumors. MNT deletions were also found in acute lymphoblastic leukemia [20], and a decrease in its levels in medulloblastomas, which was caused by the haploinsufficiency of chromosome 17p13.3 [21]. In the Sézary Syndrome, a malignant variant of cutaneous T-cell lymphoma, more than 60% of the patients show a loss of one or both MNT alleles [17][18], thus being the tumor with the highest frequency of MNT deletions. In agreement, the down-regulation of MNT expression has also been reported in Sézary Syndrome [19].
The analysis of the genomic data available in TCGA shows that 0.6% of tumors carry MNT mutations, with missense mutations being the most common. Most of these missense mutations are observed in colorectal, endometrial, melanoma, esophagic, and head and neck cancer. The majority of mutations map in the C-terminal half of the protein, i.e., downstream of the bHLHLZ domain.
Analysis of MNT mRNA expression in tumors shows that it is down-regulated in tumor samples compared to their normal tissue counterparts, including testicular germ cell tumors, uterine corpus endometrial carcinoma, and uterine carcinosarcoma. However, the opposite occurs in other tumor types, including cervical carcinoma, cholangiocarcinoma, acute myeloid leukemia, and pancreatic adenocarcinoma (Figure 2). These differences likely reflect the complex biological activities of MNT, which depend on the cellular context and the repertoire of proteins to interact with.

MYC has been one main focus of cancer research since it was identified in 1977–1979 as the oncogene captured by an avian oncogenic retrovirus [38][39][40] and was later found deregulated in 70% of human tumors [41]. However, in recent years, the interest in understanding the entire proximal MYC network has grown. The studies mentioned herein place MNT in a key position as a MYC modulator and demonstrate its diverse and essential roles in cell biology.
The functions of MNT are generally connected to MYC. Yet, studies in MYC knockout cells raised the question of whether MYC is a MNT antagonist rather than MNT a MYC antagonist [22]. Mnt knockdown in Myc-deficient rat fibroblasts showed that Mnt also conducts pro-survival functions in the absence of Myc [42]. Thus, the most important role of MYC might be to relieve MNT-mediated repression rather than activating transcription. In this scenario, MNT functions would remain unaffected by the presence or absence of MYC, while excessive MYC levels would impact MNT by impairing its transcriptional repressing activity.
The dual role of MNT in cancer, either as a MYC antagonist and or as a MYC cooperator, offers the possibility of using MNT as a therapeutical target. For instance, in MYC-driven lymphomas, tumor cells depend on MNT to survive. Thus, drugs that inhibit MNT activities (e.g., impairing critical interactions) would increase the efficacy of current therapies by enhancing apoptosis [43]. One possibility would be to test the MYC:MAX inhibitors Omomyc, 10058-F4, 10074-G5, Mad, or MYCMI-6, 11, and 14 on MNT. Some of these, such as Omomyc or Mad peptides, preferentially bind to MAX and not to MYC. Hence, they might be used as MNT inhibitors by impairing MNT–MAX interaction. However, this possibility has not been formally addressed yet [41][44][45][46][47]. In addition, as MNT downregulation stimulates NF-κB signaling through the interaction with REL , NF-κB inhibitors could be used in tumors with MNT loss, such as in CTCL (Table 1). Further research will uncover new roles of MNT in cell biology and will provide strategies for its use as a clinical target.