This entry aims to identify suggested mechanisms of diverse manifestations of COVID-19. Studies suggest that T cell-mediated immunity and specific and/or nonspecific immunity from other vaccines could protect against SARS-CoV-2. The potential role of cross-reacting antibodies to coronaviruses that cause the common cold, mumps virus, polio virus, and pneumococcal bacteria are also suggested to help protect against COVID-19.

Coronaviruses are a large family of viruses that are common in humans and several animals, such as cattle, camels, cats, and bats. Commonly known human coronaviruses that cause common colds and upper respiratory infections are HCoV-229E (α-coronavirus), HCoV-NL63 (α-coronavirus), HCoV-OC43 (β-coronavirus), and HCoV-HKU1 (β-coronavirus). However, they can also contribute to life-threatening lower respiratory infections in infants, the elderly, and immunocompromised patients [1]. Coronaviruses that infect animals can also evolve and cause human infections. Common examples of such cases are two earlier viruses, SARS-CoV (Severe Acute Respiratory Syndrome) and MERS-CoV (Middle East Respiratory Syndrome), followed by the current virus SARS-CoV-2. All three of these viruses are thought to have originated in bats and eventually infected humans. However, the exact source of SARS-CoV-2 is yet to be confirmed.

SARS-CoV-2 was first identified in an outbreak of respiratory infection in Wuhan, China, in December 2019. The infectious respiratory disease caused by this virus is now known as Coronavirus Disease 2019 ( COVID - 19). The virus spread very quickly from China and infected 221 countries, reaching pandemic status [2]. As of this writing, according to the Center for Systems Science and Engineering (CSSE) of Johns Hopkins University real-time data tracking, SARS-CoV-2 has infected over 219.4 million people and caused 4.5 million deaths worldwide. In the United States alone, the virus has infected 39.6 million people and inflicted over 643,000 deaths [3]. The Institute for Health Metrics and Evaluation (IHME), an independent global health research center at the University of Washington, estimated that by mid-May of 2021, total worldwide COVID-19-related deaths may be as high as 7.1 million [4].

COVID-19 patients display a wide range of mild to severe symptoms, including fever, chills, dry cough, shortness of breath or breathing difficulty, fatigue, muscle aches, headache, loss of taste or smell, sore throat, nasal congestion, runny nose, conjunctivitis, nausea, vomiting, diarrhea, skin rash, and discoloration of fingers and toes [5][6][7]. These symptoms may appear within 2-14 days after exposure to the virus [6]. For most people, the symptoms are mild-to-moderate, but severe illness and death may occur in some, including older adults and patients with underlying medical conditions, such as obesity, kidney disease, heart disease, type-2 diabetes, cancer, COPD, sickle cell disease, or if they are immunocompromised [8]. In the US, COVID-19 deaths in young adults (age 25–44) have also been reported [9]. In early November 2020, the CDC also identified pregnant women and children with chronic kidney disease or sickle cell disease among the high-risk category as they can also develop a severe illness due to COVID infection. Since this is a new disease, scientists and healthcare workers are still on the learning curve but understanding the disease more each day.

From the very beginning of the coronavirus pandemic, scientists and health care workers were baffled about why some SARS-CoV-2 positive patients present mild-to-severe symptoms of COVID-19 infection, yet a significant segment of the infected population remains asymptomatic. These silent spreaders can effectively transmit the virus and thus make the epidemic further difficult to control [10]. Studies indicate that about 40% of the COVID-19 population remains asymptomatic [11][12]. Long et al. (2020) reported 37 asymptomatic SARS-CoV-2 positive cases in Wenzhou, China. These individuals did not have relevant clinical symptoms during their hospitalization period, and the duration of viral shedding ranged between 15 and 26 days [10]. The authors also reported that the asymptomatic individuals displayed reduced IgG and anti-inflammatory cytokine levels as well as a weaker immune response to SARS-CoV-2 infection. In the USA, studies revealed that in Arkansas, North Carolina, Ohio, and Virginia prisons, 96% of 3,277 inmates infected with COVID -19 were found to be asymptomatic [11]; in a homeless shelter in the Boston area, 88% of 147 COVID-19-infected residents were asymptomatic; similarly, 95% of 481 COVID-19 infected workers at a Tyson Foods plant were found to be asymptomatic [12].

2. Probable Explanations for Why SARS-CoV-2 Positive Individuals Remain Asymptomatic or Have Mild Symptoms

A recent report also indicated that the number and quality of SARS-CoV-2-specific memory T cells were factors in protection against the disease [14]. They also noted that asymptomatic individuals (and those without any detectable infection) had similar levels of memory T cells against the virus. This supports an earlier report that symptoms and recovery to COVID-19 were associated with stronger T-cell immunity [15].

In the quest for developing an effective COVID-19 treatment, some researchers are focusing on ACE2 (Angiotensin-Converting Enzyme 2) receptors. With varying degrees, ACE2 receptors are expressed on the cells of nearly all human organs but are primarily found on alveolar epithelial cells, myocardial cells, proximal convolution tubular cells of kidney nephrons, bladder cells, and enterocyte cells in the ileum of the small intestine [16]. ACE2 receptors function as viral entry points, helping SARS-CoV-2 gain access to the cells. SARS-CoV-2 primarily damages the lung tissues and other organ tissues with abundant ACE2 receptors. Lung alveoli contain both Type-I and Type-II pneumocyte cells. Type-I pneumocytes (squamous epithelial cells for alveolar structures) constitute 95% of the alveolar wall, while Type-II pneumocytes (cuboidal glandular epithelial cells to produce surfactants) make up about 5% of the alveolar wall. ACE2 is highly abundant on Type-II pneumocytes. Using their spike proteins, SARS-CoV-2 viruses bind to ACE2 receptors before entering and infecting the cells ( Figure 1 ). Some researchers consider understanding the functional relationship between ACE2 receptors and coronaviruses as key to developing effective treatments against COVID-19 [17]. 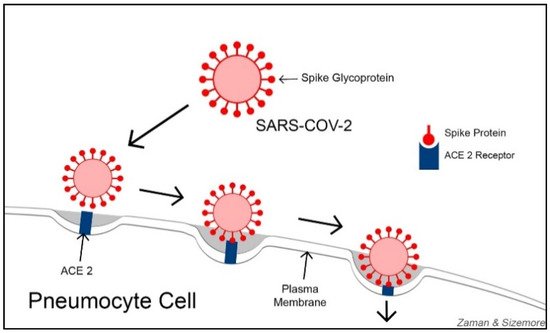 Figure 1. Spike glycoproteins of SARS-CoV-2 binding to ACE2 receptors on the plasma membrane before entering and infecting pneumocytes.

Perhaps, the abundance of ACE2 on cell membranes provides two-fold damage to the cells from SARS-CoV-2 infection: (1) abundant ACE2 receptors on epithelial cells provide the virus with numerous entry points to the cells, and (2) since the virus occupies most of the ACE2 receptors, the remaining number is inadequate to convert enough ANG II into ANG I to deflect the tissue damages by ANG II. Thus, both mechanisms might be responsible for the death of infected cells, causing the destruction of tissues and leading to organ failure. In a study published in 2020, Sriram and Insel argued that the level of ANG II activity determines the severity of damage in COVID-19 patients [18][19]. Angiotensin 1-7 (Ang 1-7) is an active heptapeptide (H-Asp-Arg-Val-Tyr-Ile-His-Pro-OH). It is produced from the polypeptide Angiotensin 1 by the action of the enzyme neprilysin or from hydrolysis of Ang II by ACE2 action [20]. Ang 1-7 is known to be a vasodilator with antioxidant and anti-inflammatory effects [21][22] and counteracts the actions of Ang II [23].

Patients with COVID-19 have presented a wide range of symptoms and sequela [4][5][6]. In general, those who were older and/or had underlying medical conditions were more prone to serious and, in many cases, life-threatening illnesses [24]. It is clear that having a strong Type I interferon response was a key factor in those who had mild-to-absent responses to SARS-CoV-2 [25][26].

Besides decreased Type I IFN in older individuals, the disparity in age-related cases could be due to a multitude of other factors in young people, including fewer ACE2 receptors, less likelihood of cytokine storm [27], and the presence of cross-reacting antibodies due to infection with non-COVID coronaviruses that cause the common cold [28]. In addition, cross-reacting antibodies to the mumps virus (via the MMR vaccine), the poliovirus [29], or pneumococcal bacteria (Root-Bernstein, 2020) [30] could also provide some protection, although it is not clear if this would fully protect someone against having COVID-19 [31]. Since the polio vaccine and the MMR vaccine are normally given to younger children, it is feasible that they would have more available cross-reacting antibodies than adults, for whom the antibody titers would have waned [31][32]. In addition to children younger than two years of age, the pneumococcal vaccine is recommended for the elderly [33]. Lewnard et al. (2021) reported reduced incidence of COVID-19 in adults aged 65 or older who had received the PCV13 vaccine, which is normally given to those who are two years old, whereas the PPSV23 vaccine (normally given to older individuals) did not provide protection [34]. The presence of various cross-reacting antibodies has also resulted in false-positive diagnoses of COVID-19 [35]. As of this writing, there are several SARS-CoV-2 variants of concern. Health officials and researchers are currently studying the effects of these variants, their susceptibility to vaccines, and whether they present new or different manifestations. At present, the evidence is preliminary, although it is developing rapidly [36].

Because of previous and widespread vaccination, we no longer immunize anyone against smallpox, which was declared eliminated in 1980 [37]. The polio virus was eliminated in the western part of the world in 1994 but remains endemic in parts of Afghanistan, Nigeria, and Pakistan [38]. As noted previously, vaccination against polio still continues today in the United States. It is hoped that with effective vaccination policies for COVID-19, the world will develop herd immunity and be protected against future pandemics. However, this will take considerable cooperation on the part of individuals and countries in receiving and administering the protective vaccines against SARS-CoV-2.