The voltage-gated sodium channel (Na v ) plays a vital role in the generation and propagation of action potential in excitable cells such as neurons and cardiac myocytes [1]. The family of voltage-gated sodium channels has nine members named Na v 1.1 through Na v 1.9 [2]. Among them, Na v 1.1, Na v 1.2, Na v 1.3, and Na v 1.6 are predominantly expressed in neurons of the central nervous system [3][4]. Three isoforms (Na v 1.7, Na v 1.8, and Na v 1.9) are widely expressed in neurons of the peripheral nervous system, such as dorsal root ganglia (DRG) neurons [5][6][7]. The isoform Na v 1.4 is responsible for upstroke of the action potential in skeletal muscle [8], and Na v 1.5 is a cardiac-specific isoform known as cardiac sodium channel ( Figure 1 ) [9]. 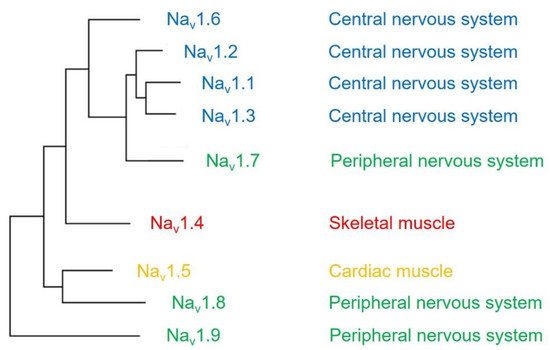 An essential property of voltage-gated sodium channels is “inactivation”, which prevents the reopening of the channel until complete recovery [10]. The inactivation regulates the frequency of action potential firing initiated by sodium channels in excitable cells. It reduces the breakdown of ionic gradients and cell death.

All voltage-gated sodium channels contain a calmodulin (CaM)-binding IQ domain necessary for the channel inactivation [11]. CaM is a small protein expressed in all eukaryotic cells [12]. It acts as a ubiquitous signal transducer and regulates essential processes such as neuronal plasticity, muscle contraction, and immune response [13]. CaM has two globular domains (i.e., N-terminal lobe and C-terminal lobe) connected by a linker. Each lobe contains two EF-hand motifs binding to Ca 2+ [14]. In the Ca 2+ -free state, the EF-hands are collapsed in a compact configuration. When Ca 2+ is bound to CaM, a conformational change occurs in the protein and rearranges the structural information of CaM.

The CaM-binding IQ domain is located within the C-terminal domain of the voltage-gated sodium channel. It contains around 25 residues with two highly conserved amino acids, isoleucine (I) and glutamine (Q), in the middle of the motif. The residues in the IQ domain form a seven-turn α-helix binding to CaM in a Ca 2+ -independent manner. In addition to the IQ domain, a globular domain in the C-terminus of voltage-gated sodium channel consists of EF hand-like (EFL) motifs that interact with CaM in the absence of Ca 2+ [15][16], whereas an intracellular loop connecting domains III and IV (III-IV linker) in some isoforms of the sodium channel is shown to interact with CaM in the presence of Ca 2+ [17]. 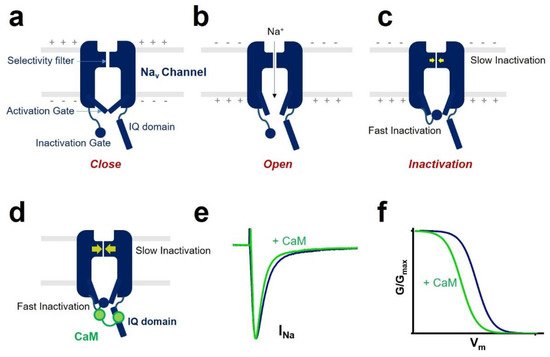 The most crucial regulator is Ca 2+ [11][26]. In the presence of Ca 2+ , Ca 2+ /CaM (Ca 2+ -binding form of CaM) has a different regulation of sodium channel function compared with apo-CaM (Ca 2+ free CaM), and Ca 2+ binding to CaM induces rearrangements between the voltage-gated sodium channel and CaM lobes. In the absence of Ca 2+ , the N-lobe of CaM does not target the IQ domain ( Figure 3 a and Figure 4 a,b). In the presence of Ca 2+ , the structure of the N-lobe is rearranged by Ca 2+ . It generates an allosterically conformational change binding to the distal IQ domain of the channel ( Figure 3 b and Figure 4 c). However, the C-lobe of CaM can bind to the voltage-gated sodium channel IQ domain in a Ca 2+ -independent manner. 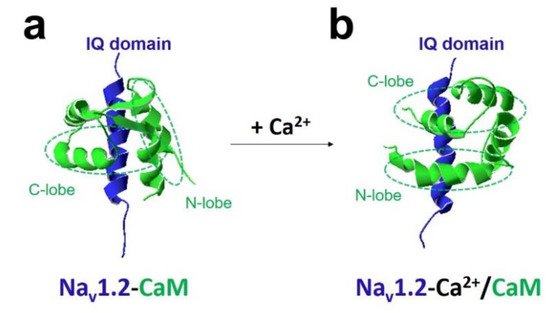 Figure 3. Ca2+ modulates the interaction between CaM and Nav1.2 IQ domain. The NMR structures showed Nav1.2 IQ domain (blue) in complex with CaM (green) in the absence (a) or presence (b) of Ca2+. Two lobes (N-lobe and C-lobe) of CaM are indicated. C-lobe of CaM bound to the Nav1.2 channel IQ domain independent of Ca2+ concentration. In the absence of Ca2+, the N-lobe of CaM did not interact with the IQ domain (PDB: 2KXW) (a). When binding to Ca2+, the N-lobe of CaM was induced to interact with the distal IQ domain of Nav1.2 channel (PDB: 2M5E) (b).

The FHFs were shown to form a complex with CaM and modulate CaM regulation of Na v 1.5 function [27]. A recent study discovered fibroblast growth factor homologous factor FGF13 (fibroblast growth factor 13, also known as FHF2) tuned arrhythmogenic late sodium currents in CaM binding-deficient channels in cardiac myocytes [27]. The crystal structures in Figure 4 showed that FGF and Ca 2+ mediated the interaction between CaM and Na v 1.5 IQ domain. It indicated that the N-lobe of CaM interacted with the EFL of the channel in the absence of FGF. However, when FGF was bound to the channel, the N-lobe of CaM was rearranged. It did not make contact with the EFL and was free to interact with other parts of the channel complex. The N-lobe of CaM likely interacted with the III-IV linker of the sodium channel and modulated the channel’s inactivation.

Studies in guinea-pig ventricular myocytes revealed CaM enhances the cardiac sodium current density [36]; this is different from the result that CaM does not influence on sodium current amplitude when co-expressing with Na v 1.5 channel in HEK293 cells [35]. It indicates that some environmental factors in cardiac tissues are involved in CaM regulation of Na v function.

To date, there is no study investigating the interaction between CaM and Na v 1.9 channel. The Na v 1.9 IQ domain shares high sequence homology with other sodium channels ( Figure 5 ). It remains to be determined if CaM regulation of Na v 1.9 channel plays a role in channel function in sensory neurons.