Alternative materials to replace cement in pavements have recently been widely studied with the purpose of decreasing the environmental impacts that the construction industry generates. In this context, the implementation of sustainable urban drainage systems has grown, especially with porous pavements, with the intention to reduce water and environmental impacts. In the present investigation, the addition of alternative materials to minimize the use of cement in porous concrete pavements is evaluated. Starting from a partial substitution of Portland cement with metakaolin, experimental geopolymer concretes were produced with metakaolin and waste basalt powder according to several dosages. Two sets of mixtures were analyzed to evaluate the Porous Concrete Design (PCD) methodology for porous concrete mixtures with alternative materials. A deep analysis was proposed for the evaluation of the mechanical and volumetric properties of the mixtures. Results demonstrated that replacing 5% of cement with metakaolin can increase both permeability and indirect tensile strength. Geopolymer mixtures can achieve permeability significantly higher than the traditional porous concrete, but this decreases their indirect tensile strength. However, considering the promising results, an adjustment in the mix design of the geopolymer mixtures could increase their mechanical properties without negatively affecting the porosity, making these materials a suitable alternative to traditional porous cement concrete, and a solution to be used in urban pavements.

The total porosity (AV) and permeability (k) results are shown in Figure 1. 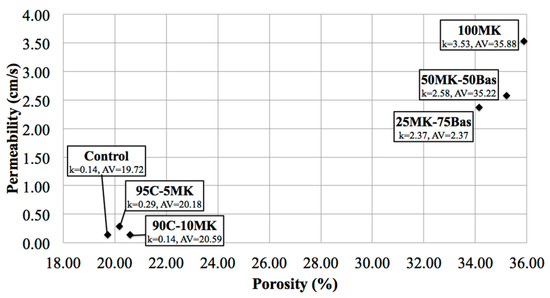 It can be observed that the geopolymer mixtures achieved permeability results over 90% higher than the Control mixture because of the porosity parameter used in order to control the VMAs. If the mixtures with cement (Control, 95C-5MK, and 90C-10MK) had been designed with a higher porosity, the mortar amount would have been lower, making the adhesion between the aggregate particles poor and, therefore, weak.

The density (ρ) and indirect tensile strength (IT) results are presented in Figure 2. 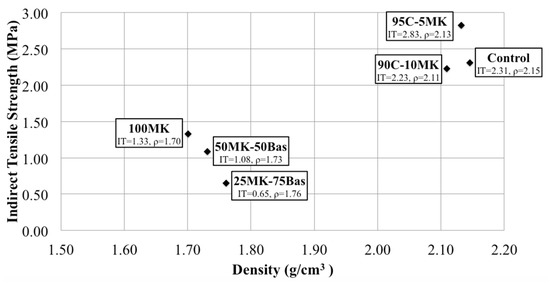 Here, the geopolymer mixtures obtained lower results if compared to the mixtures with cement, because of the higher porosity. Between the geopolymer mixtures, 100MK showed the highest ITS values, and this was in line with the mechanical properties highlighted in the geopolymer paste characterization. However, in wider terms, the 100MK reached ITS values 42% lower than the Control mixture. Nevertheless, it can be observed that mixtures 100MK and 50MK-50Bas achieved acceptable values of ITS, over 1 MPa, despite the high porosity the sample presented.

In addition, the use of basalt powder demonstrated a weak bond between the geopolymer paste and the aggregate, as the paste became more fluent and went to the bottom of the mold. This clogged the mixture and decreased ITS: 50% of basalt powder in the mixture decreased the ITS by almost 19% if compared to mixture 100MK. Adding basalt powder up to 75% of the cementitious material weight reduced the strength around 51%. It was observed that the lowest cohesion between aggregate particles led to lower ITS results.

In the case of the cement mixtures, ITS results increased by 18% when replacing 5% of cement with metakaolin (95C-5MK) without a relevant variation in the density, compared to the Control mix. The ITS was reduced to almost the same values as the Control mixture when the metakaolin amount increased to 10% (90C-10MK).

Furthermore, to compare the obtained results with other experimental porous concretes, a detailed literature review was carried out. Bringing together the most recent studies on ITS in porous concrete pavements, Table 1 demonstrates the lower and higher results achieved by each author, as well as the w/c, aggregate size, and additional materials employed. ITS values range from 0.02 MPa to 3.09 MPa. Taking this into account, all the experimental mixtures included in this research paper showed acceptable results.

Table 1. Indirect tensile results and materials employed by some authors.

In addition, considering some authors obtained high ITS values by employing additives, fibers, or other additions (such as sand and certain types of ash) to improve the properties of the mixture, the results obtained in the present investigation demonstrated that the methodology of design, as well as the compaction method used, can achieve very good results, with a range between 0.65 MPa and 2.83 MPa.

Figure 3 shows the graph proposed by Bonicelli et al. [10], showing the performance requirements for different urban uses of porous concrete pavements and locating results of the present investigation. As stated by the authors, mid-volume urban roads require ITS values over 1.9 MPa, low-volume urban roads and parking lots require instead ITS values between 1.7 and 1.9 MPa and permeability results over 1 cm/s. ITS values between 1.5 and 1.7 MPa and permeability over 1.5 cm/s are recognized as suitable for bike paths, while permeability values over 2 cm/s work better for pedestrian areas, squares, foot paths, and parks.

As seen in Figure 3, all the cement-base mixtures can be considered suitable for mid-volume urban roads because of the high mechanical properties and relatively low permeability. The geopolymer mixtures are suitable for pedestrian areas, squares, footpaths, and parks because of the high permeability capacity. However, for future research, the reduction in the design AV for geopolymer concrete might improve the final ITS of the mixtures.

Despite the environmental advantages that porous pavements made with geopolymers can present, the exposure of these materials to water can decrease the strength of the mixtures, as Table 2 shows. Once again, an optimization of the design parameters could decrease the porosity and so increase the VMAs and the final mechanical properties. It is worth noting that in the case of the 100MK mixture, the ITS reduction was not significant (16.67%). For the other experimental mixtures the addition of basalt had a negative effect on the ITS reduction, probably because of the already poor cohesion between particles, which was further limited by the presence of water.

Table 2. Indirect tensile results of geopolymers before and after water exposure.

Cement production has a big environmental impact and, consequently, alternative materials are being studied to replace it in pavements.

The present research shows a comparison of the functional and mechanical properties of different porous concretes produced with different amounts of metakaolin and alternative geopolymer porous mixtures containing metakaolin and basalt powder.

Based on the discussed results, the following conclusions can be stated: