The current knowledge about viruses of the Western honey bee, Apis mellifera.

This entry is a summary of the review "Diversity and Global Distribution of Viruses of the Western Honey Bee, Apis mellifera" published in MDPI Insects (doi:10.3390/insects11040239) from members of the COLOSS Virus Taskforce.

1. What are Viruses of Apis mellifera?

Viruses are submicroscopic parasites that can only replicate inside the cells of a living organism: they are essentially a small nucleic acid genome packaged in a protective shell and they cannot reproduce independently. Viruses are a universal feature of all forms of life, and thus also of honey bees (Apis mellifera). A growing number of viruses has been documented and several of these contribute signiﬁcantly to honey bee colony losses. Viruses are both the simplest organisms (essentially a small nucleic acid genome packaged in a protective shell) and the most complex organisms, since many of their key traits are expressed indirectly through their host. The viruses’ absolute dependency on a continuous supply of new hosts for its survival requires an infection strategy balancing the needs of the virus with those of its host(s). This balance is dynamic and requires continual, and rapid, adaptability by the virus. This adaptability is mediated by the high variability of the virus genome, and is expressed through physical, physiological and behavioural changes in the host, that frequently affect virus transmission.

Disease or death of the host is not inevitable but rather an adaptive feature: useful only if it furthers transmission and subject to change if needed. Most known bee viruses are therefore asymptomatic, with only a few causing major disease. These viruses can act synergistically with other biotic and abiotic stressors, compromising individual and colony health and functionality. Most viruses infecting honey bees can also infect a wide range of other insect species, mainly other bee species, and are thus part of a more complex disease ecology involving other pollinators, flowering plants and pollination networks. Human industry and globalization have magnified the scale of virus re-distribution across the world, and its risks for local pollinators and pollinator-dependent plants, exemplified by the increasing incidence of emerging infectious diseases (EIDs). In a context of global change, understanding the distribution and spread of diseases is essential to designing appropriate control and containment strategies.

Viruses of honey bees have historically been discovered through their symptoms, which can be either physical (DWV, CBPV, CWV, AmFV, AIV), developmental (SBV, BQCV), behavioral (DWV, CBPV, ABPV, SBV, SBPV) or demographic (BVX, BVY), and more recently also through high-throughput sequencing (HTS) technologies (Table 1). The overwhelming majority of viruses are asymptomatic, particularly the newly discovered ones, and only a miniscule proportion cause symptoms or disease. Some bee viruses (e.g. DWV, ABPV) are associated with parasitic mites, such as Varroa destructor and Tropilaelaps mercedesae, that transmit the virus between honeybees. These mites are called ‘vectors’ of virus transmission. The transmission by vectors can affect the genetic composition of the virus and its virulence, as the virus adapts to a potent new transmission route. The extent of this virological biodiversity by itself poses questions about its origins and functional significance of viruses, either as former/future pathogens or molecular symbionts. The accumulation of honey-bee-derived virus genome sequences needs to be completed by molecular, biological and epidemiological character studies in order to understand their possible functional and ecological roles and thus their current relevance and possible future significance.

Figure 1 - overview of the transmission routes of viruses of bees 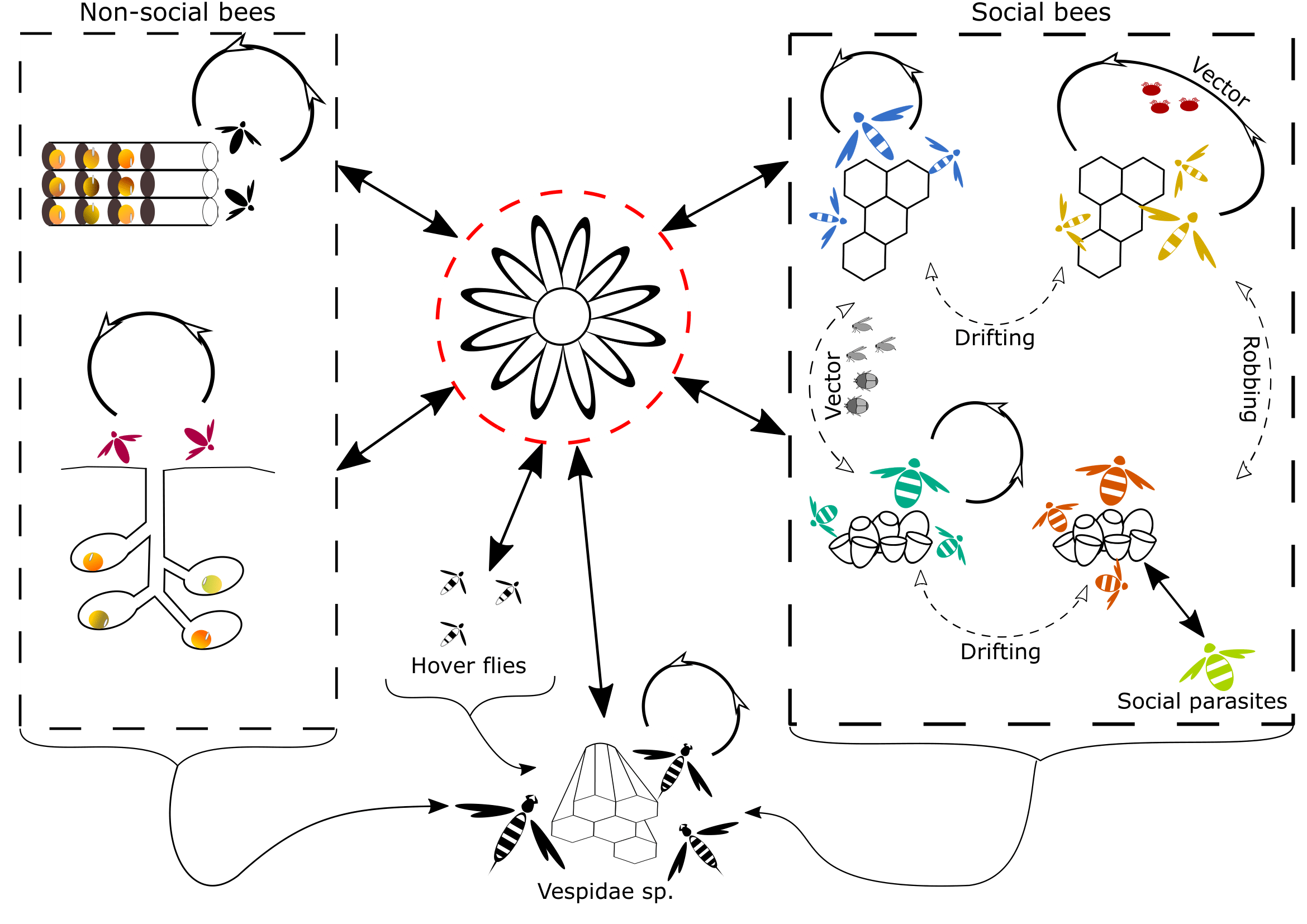 A comprehensive review on transmission of viruses of A. mellifera can be found in Bee viruses: routes of infection in Hymenoptera.

The pathogenicity of viruses of honey bees is the consequence of their replication within the cells of their hosts. Some of the viruses have tropism towards many organs, while other viruses are restricted to specific organs (see Table 1). Thus, if symptoms appear in an individual bee, they are a direct outcome from the virus interrupting the function of one or more organs/systems in the bee’s body. However, clear symptoms usually only appear at very high virus titers, and many persistent or asymptomatic infections that may cause long-term damage to the colony can remain undetected.

Many bee viruses do not produce clear physical or behavioral symptoms in honey bees, while for others symptoms may exist but have not yet been identified. Many viruses are present in seemingly healthy colonies as asymptomatic, covert infections. In most cases some promoting factor, like varroosis (i.e. infestation of the colony by varroa mites) are necessary to turn these pathogens into a symptomatic infection. The honey bee viral diseases that have been most extensively studied usually possess one or more distinctive symptoms that can help make diagnoses. Virus pathology, symptom development and virulence depend on several factors (mostly amount of virus produced, where in the body it is produced and its transmission route). For instance, the occurrence of symptoms of deformed wing virus infections strongly depends on the transmission route, namely, it appears that infections through vertical, venereal or oral transmission are effectively symptomless, even if the virus titers are as high as those achieved by Varroa-mediated transmission.

Table 1. Symptoms of viral infections in A. mellifera. Tissue tropism refers to the organs in which the virus was found. Symptoms report the physical and physiological effect of viruses as observed in honey bees. Only viruses with known symptoms are reported here.