The apicoplast is surrounded by four membranes and is thought to be the result of secondary endosymbiosis. It is the site of quite a few metabolic pathways, such as heme, isoprenoids, and fatty acids syntheses. It is thought that the outermost membrane of the apicoplast is part of the endomembrane system.

Protein sorting is the process by which proteins are moved to their proper destinations inside and outside the cell [6]. In eukaryotes, proteins are directed to the lumen of specific organelles, diverse intracellular membranes, the plasma membrane, or outside of the cell by the process of secretion [6]. The protein targeting process is controlled by specific sequences within the protein itself [7][8]. In order to successfully replicate inside the erythrocyte, P. falciparum needs to correctly sort and traffic its newly-made proteins to all of its organelles. In addition to trafficking proteins within its cell, the parasite ships proteins beyond its plasma membrane, into both the parasitophorous vacuole and into the host erythrocyte cytoplasm and plasma membrane [9][10]. Moreover, the parasite possesses a food vacuole, an acidic organelle where the host cell hemoglobin is digested to amino acids. The food vacuole is also the site of action of the antimalarials chloroquine and quinoline [11]. In P. faclciparum , additional organelles named mononemes and exonemes have also been described [12]. The latter seems to play a role in the parasite egress [12].

2. Protein Sorting to ER and Golgi

Akin to all eukaryotes, P. falciparum proteins that are trafficked to the various organelles contain a canonical signal peptide, a short sequence of hydrophobic amino acids located at the amino terminus. The signal peptide indicates the co-translational transport of these proteins into the endoplasmic reticulum (ER). In P. falciparum , the ER is located near the nucleus and appears as ‘‘horn-like’’ projections [8]. Except for the apicoplast-bound proteins, the parasite organellar proteins are transported to the Golgi apparatus [13]. In most eukaryotes, the Golgi apparatus is organized into biochemically well-defined compartments called cisternae termed the cis -, medial-, and trans -Golgi. In mammalian cells, these cisternae are stacked or in close apposition to each other. However, in the budding yeast, Saccharomyces cerevisiae , the Golgi cisternae are unstacked [14]. Plasmodium falciparum seems to have a simplified, unstacked Golgi apparatus. N-linked glycosylation, a process that is finalized in the cis -Golgi, does not occur in P. falciparum [15]. Several ultrastructural studies involving serial sectioning and 3-D reconstruction analysis of P. falciparum -infected erythrocytes have not determined the presence of stacked Golgi cisternae in the parasite [16][17][18]. In addition, indirect immunofluorescent studies using antibodies against cis - and trans -Golgi resident proteins of P. falciparum also support the absence of stacked cisternae in P. falciparum [19][20]. Therefore, in P. falciparum , the protein sorting apparatus from the ER to Golgi appears to be reduced.

3. Protein Sorting to the Apicoplast

In the mid-1990s, a unique organelle characterized by the presence of a vestigial, non-photosynthetic plastid was discovered in P. falciparum [21][22][23]. The apicoplast in P. falciparum seems to be positioned on a small projection of the ER, but it is not clear whether it is part of the ER [13]. However, current evidence suggests that the apicoplast is separate from the cis -Golgi [13]. In addition, the apicoplast appears to be located upstream of the cis- Golgi ( Figure 1 ). The apicoplast is surrounded by four membranes and is thought to be the result of secondary endosymbiosis [24]. It is the site of quite a few metabolic pathways, such as heme, isoprenoids, and fatty acids syntheses [25]. It is thought that the outermost membrane of the apicoplast is part of the endomembrane system [24]. Most of the resident apicoplast proteins are encoded by genes located in the parasite nucleus [26][27]. These proteins are translocated across the four membranes by means of a two-part N-terminal extension that has been shown to be both necessary and sufficient for sorting to the apicoplast [24]. The first segment of the N-terminal exten sion sequence is similar to a classical signal peptide. It is responsible for the translocation into the secretory pathway. On the other hand, the second segment shares homology to chloroplast transit peptides and is needed for entering the apicoplast [28]. 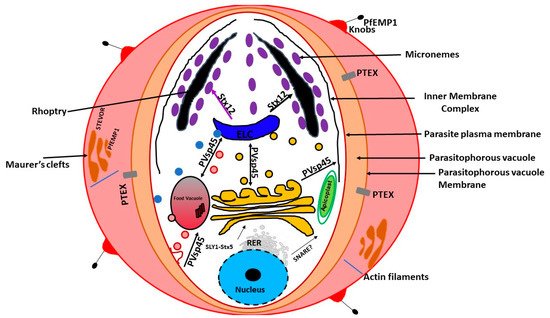 Figure 1. Schematic representation of protein trafficking directed by P. falciparum merozoite-infected erythrocyte. The model outlined in this figure is a summary of the recent data on protein sorting and trafficking in P. falciparum and its relative, T. gondii. Secreted proteins are made in the rough ER (RER). Secretory vesicles from the RER are thought to be shipped to the cis-Golgi with the help of SLY1 and Stx5. Bidirectional sorting between the endo-lysosomal compartment (ELC) and the trans-Golgi network (TGN) is also mediated by Vsp45. Transport from the ER to the apicoplast is facilitated by unidentified SNARE proteins. Proteins destined to the micronemes and rhoptries are sorted by the adaptor Stx12. Endocytosis, which leads to the host cell cytosol uptake (HCCU), is likely to occur via the cytostome or the micropore (not shown). These vesicles are shuttled to ELC. The SNARE proteins involved in this process are unknown. Vsp45 is necessary for endocytosis and release of the cargo to the food vacuole. The knobs and some of the proteins involved in PfEMP1 trafficking are shown.

Previous experiments using green fluorescent reporter in which the apicoplast signal peptide protein was replaced by the signal peptide of a micronemal and a knob-associated protein indicated that targeting proteins to the apicoplast begins at the general secretory pathway of P. falciparum [13]. In P. falciparum, the signal peptide in apicoplast-resident proteins, was shown to facilitate translocation across the rough ER (RER) membrane through the Sec machinery releasing the protein into the ER lumen [29][30]. This is followed by the removal of the signal peptide by signal peptidase [31][32]. Once in the ER, the transit peptide directs the transport into the apicoplast [28]. This mechanism of trafficking seems to be shared by other secondary plastids [31][32][33][34][35]. Furthermore, it has been validated in Toxoplasma gondii [36][37][38][39]. On the other hand, apicoplast transmembrane proteins that are encoded by the nucleus are trafficked via the Golgi apparatus [40].