The possibility of developing deep-sowing tolerant (DST) maize to absorb moisture from subsoil zones is crucial to maize adaptation to water-stressed environments. The function of the mesocotyl in field emergence of seedlings is established in grasses. However, information is scarce on the extent of genetic variability for mesocotyl length (ML) in maize. Sixty-eight maize genotypes were studied using Completely Randomised Design in a laboratory experiment to investigate the extent of genetic variability for ML, and the relationship of seed biochemical components with ML. Ten seeds of each genotype were germinated for 10 days in the dark. Mesocotyl length was determined by placing cut mesocotyl against a flexible measuring tape. Biochemical contents of seeds were determined at a standard diagnostic laboratory. Analysis of variance revealed highly significant (p ≤ 0.01) genotype mean square, indicating sufficient variability for genetic improvement. Broad-sense heritability and genetic advance were high and implied that ML was heritable. Mean ML for genotypes ranged from 0.58 to 9.02 cm; thus, planned crosses can be made for ML improvement. A dendrogram from cluster analysis based on Ward’s minimum variance cluster analysis classified 65 of the genotypes into clusters I, II, and III with ML (mean ± standard deviation) of 0.49 ± 0.18, 4.25 ± 0.96, and 9.16 ± 0.93 cm, respectively. All the measured biochemical parameters, except selenium, showed significant (p ≤ 0.05/0.01) associations with ML. Crosses can be planned involving genotypes from clusters 1 and III, to exploit heterosis for ML in a hybrid program. The results obtained from this study provide a basis for the development of DST maize for drought-prone environments.

As shown in Table 1, analysis of variance revealed a significant (p ≤ 0.01) genotype mean square for mesocotyl length. Moreover, genotypic variance (8.79) was close to phenotypic variance (13.19), leading to high broad-sense heritability (0.67), while genotypic (GCV) and phenotypic coefficients of variation (PCV) were high at 0.57 and 0.70, respectively. In addition, genetic advance (as a % of mean) was extremely high (almost unity). There was also a difference between the computed genotypic and phenotypic variances, indicating the role of environmental factors in the elongation of mesocotyl in maize. The significant genotype mean square, as well as the close correspondence between the genotypic and phenotypic variances, indicated the existence of sufficient variability for mesocotyl length among the maize genotypes. Thus, there is the possibility of genetic improvement of the trait for future breeding programs. The estimate of environmental variance suggested the need to test the maize genotypes in more environments to investigate the effect of genotype × environment interaction in the elongation of mesocotyl. Similar observations have been reported for agronomic traits in maize. Sivasubramanian and Menon [1] ranked GCVs and PCVs as low, moderate and high when the values are <0.10, 0.10–0.20, and >0.20, respectively. The high GCV (0.57) observed indicated potential for improvement of ML within the germplasm. The higher value of PCV than GCV is an indication of the role of the environment in the phenotypic expression of ML, and further suggested the need to test in more environments. According to Johnson et al. [2], heritability values < 0.30, between 0.30 and 0.60, and above 0.60 are classified as low, moderate, and high, respectively. Thus, the observed heritability estimate of ML was high and implied that the trait was majorly controlled by the genotype and is therefore heritable. Olayiwola and Soremi [3] have suggested that broad-sense heritability should not be solely used in determining the genetic potentials of a trait since it (broad-sense heritability) is composed of both additive and non-additive genetic variances, and as a result, high heritability is not always associated with high genetic advance [4]. Earlier, Johnson et al. [2] recommended that estimates of heritability and genetic advance should be jointly considered in predicting the value of selection. The high genetic advance (as a % of mean) of mesocotyl length is an indication that the trait will respond favourably to selection.
Table 1. Mean squares and genetic components of maize genotypes for mesocotyl length after 10 days in the dark.
**, significant at 99% level of confidence; DF, degrees of freedom; R2, R-squared.
Grouping genotypes into clusters has been found effective in minimising the genotype pool and easing the process of selection [5]. Sixty-five of the maize genotypes were clearly delineated into three clusters based on mesocotyl length, while three genotypes, PVAQEH-4, LY1919-14, and A1804-66, were ungrouped (Table 2, Figure 1). Cluster 1 was composed of 10 genotypes with no or short mesocotyl growth. Cluster 2 was composed of 20 genotypes with moderate mesocotyl growth ranging from 2.45 cm for †PVAEH 36 to 5.56 cm for PVAEH 29, while cluster 3 had 36 genotypes characterised by long observed mesocotyls ranging from 5.95 cm for †PVAEH 32 to 9.02 cm for LY1901-18. The observed clustering pattern implied the existence of considerable genetic diversity for ML among the maize genotypes. Several past works have classified maize genotypes into clusters based on a single trait. For instance, Oyetunde et al. [6] and Badu-Apraku et al. [7] classified maize genotypes into heterotic groups based on specific combining ability for grain yield. Crosses can be planned involving genotypes from clusters 1 and 2 (the most divergent groups) to exploit heterosis for ML. 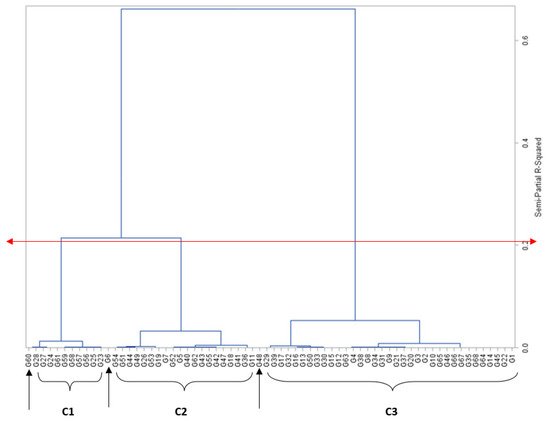 Figure 1. Dendrogram of relatedness among maize genotypes (X-axis), based on genetic similarity (Y-axis) from Ward’s minimum variance cluster analysis. The red double-arrowed line delineates the genotypes into clusters at approximately 65% level of similarity; C1, C2, C3 are clusters 1, 2, and 3, respectively; single-arrowed line signifies ungrouped genotypes.
Table 2. Mean ± standard deviation (Std) of mesocotyl length (ML) and classification into clusters based on ML of maize genotypes germinated in the dark for 10 days.
*, not classified.
Sixty-two of the maize genotypes tested developed measurable mesocotyl. The mean mesocotyl length ranged from 0.58 cm for A1312-12 to 9.02 cm for LY1901-18 (Table 2). The differences in ML lengths of the maize genotypes further indicated the existence of variability of the trait, and genotypes with high ML values, such as LY191-01, †PVAEH 34, and †PVAEH 31 have potential to draw moisture from the subsoil and could be adaptable to drought-prone areas. The standard deviation of a set of numbers is an indication of the spread of the numbers from the mean. A low standard deviation value implies that the majority of the numbers are close to the average, while a high value implies that most numbers are far from the mean. Genotypes with low standard deviation estimates should, therefore, be more reliable for prediction. Hence, genotypes that combined high ML with low standard deviation values, such as LY1901-18 and †PVAEH 34, would be more reliable in predicting the ML of maize. In addition, planned crosses can be made involving the genotypes A1312-12, LY1501-7, and LY1901-14 to develop maize hybrids with potential for adaptation to drought conditions. Moreover, genotypes with high standard deviation values could be useful for development of inbred lines for future hybrid programs with focus on developing deep-sowing tolerant maize.
Information on seed micronutrients and biochemical composition which affects the seedling vigor and organ development may provide some insight to the understanding of the mechanism underlying mesocotyl elongation. In this study, significant (p ≤ 0.05/0.01) associations were observed in the relationship of ML with all the measured biochemical parameters except selenium (Table 3). Furthermore, all the significant associations were positive except for the negative association between ML and amylase content. The significant levels of association observed implied the possibility of simultaneous improvement of each of iron, zinc, crude protein, free fatty acid, oil content, linoleic acid, and amylase content with mesocotyl length of maize. The quality attributes could serve as selection indices for ML. Muhammad [8] employed nutrient priming to reveal the impact of seed reserves on seedling development and root biomass in maize. According to Martinez-Ballesta et al. [9], seed biofortification enhances seed vigour, and can play a role in abiotic stress tolerance.
Table 3. Pearson correlation coefficients of seed biochemical parameters with mesocotyl length (ML).
* and **, significant at 5 and 1%; ns, not significant.