In recent years, biotechnological advances have offered safe and environmentally friendly alternatives for crop production. Technologies such as RNA interference (RNAi)-mediated gene silencing have emerged as innovative tools for agricultural pest management. Here, we provide an overview of RNAi as a promising approach for ACP control and discuss the associated challenges.

Major obstacles in citrus tree development include weather conditions and disease epidemics. In particular, following its emergence, citrus Huanglongbing (HLB) disease has become the primary threat to citrus production in majority of the main global citrus-producing areas, including Brazil, the USA, and China [6][7][8].

HLB is caused by a Gram-negative bacterium of the genus Candidatus Liberibacter [9][10] and spread by the insect vector Diaphorina citri Kuwayama (Hemiptera: Leviidae), also known as Asian citrus psyllid (ACP) [11]. Within the plant, the bacterium is restricted to the phloem and cannot be cultured in artificial media. Moreover, there are no effective tools to control the spread of the insect vector and no commercial citrus varieties resistant to HLB have been developed to date, which further hamper disease control [6][7][8]. Nonetheless, integrated management involving the cultivation of trees in certified protected nurseries, monitoring of ACP populations and citrus tree shoots, application of biological and chemical measures to control insect population, and rapid removal of symptomatic trees from the field has been implemented [6][11][12]. Insecticides are a critical component of ACP management [11]; however, as insects can develop resistance to insecticides over time, new chemicals and protein-based molecules with different modes of action are essential to maintain disease control efficiency and provide sustainable solutions. In this light, biotechnological tools developed during the last two decades have proven useful in agriculture to overcome the various challenges of pest resistance, disease spread, weed control, and stress tolerance and thereby improve product yield and quality [13]. For instance, RNA interference (RNAi) is based on the silencing of target gene expression through the intervention of double-stranded RNA (dsRNA) [13]. This technology has been tested as a novel approach in different eukaryotic species and, thanks to its high specificity, may serve as a potent tool for crop protection by managing insect pests or controlling the spread of vector-borne diseases [14][15][16]. RNAi presents great potential for ACP management because most of the core machinery genes are present in insects [17]. Therefore, insect control can be achieved through the cultivation of genetically modified citrus plants or application of dsRNA-based pesticides, similar to the conventional ones [18]. However, the second approach can be considered easier for application in the field from the perspective of different regulatory processes across countries. RNA-based pesticides can protect trees while reducing the use of chemicals to control ACP [19], serving as an effective yet sustainable agricultural technology [20]. Despite its many benefits, however, some challenges related to the use of RNAi for insect control remain. For instance, lack of an efficient method for the delivery of dsRNA to the insect action site, off-target and non-target analytical effects, potential development of resistance, and cost of dsRNA synthesis are some of the shortcomings of RNAi [21][22][23]. In this mini review, we discuss the recent advances and major challenges in RNAi tools for ACP control.

In RNAi, an RNA molecule inhibits mRNA translation, thus hindering protein synthesis [24]. Fire et al. [13] first described RNAi using dsRNA-mediated gene silencing in the nematode Caenorhabditis elegans . Briefly, once inside the cells, the dsRNA is cleaved by endonuclease III DICER into a small interfering RNA (siRNA) of 20–23 nucleotides. Then, the double-stranded siRNA is separated, and the guide strand binds to the Argonaute (AGO) protein, forming the catalytic component of the RNA-induced silencing complex (RISC) [24]. Next, the siRNA –AGO complex recruits other components of RISC and mediate mRNA degradation, mRNA translational repression, or chromatin modification, leading to post-transcriptional gene silencing (PTGS) [24].

The systemic effects of RNAi are essential for the practical application of RNAi-mediated silencing in pest and pathogen management. One of the pathways of systemic RNAi effects involves secondary dsRNA synthesis from the remaining mRNA molecule or the passenger strand of siRNA through the activity of RNA-dependent RNA polymerases (RdRPs) [25]. This secondary source of dsRNA has been reported in most eukaryotes, including plant pathogens and pests. However, no RdRP orthologs have been detected in hemipterans, suggesting that secondary dsRNA synthesis does not occur in these insects and that they present another as yet unreported system that amplifies dsRNA synthesis [16]. Although the precise mechanism underlying the amplification dsRNA synthesis remains unknown, several studies have reported the success of RNAi-mediated silencing in hemipterans, including ACP. Given that these insects harbor the core components of the RNAi machinery, namely DICER and AGO family proteins, RNAi-mediated gene silencing may indeed be used to manage ACP [26].

Since the first report of the use of RNAi-mediated gene silencing for pest control [27][28], the application of this technology has been extensively studied for the control of insects, including ACP. Indeed, the success of this technology depends on several factors that affect the dsRNA delivery method, and target gene selection is crucial. Several studies on the RNAi-mediated control of ACP are summarized in Table 1 . Additional factors including the characteristics of the dsRNA molecule, such length and concentration, must also be appropriately adjusted to ensure pesticide effectiveness.

Initial studies on the RNAi-mediated control of ACP focused on the delivery of dsRNA via topical application. In the first study using dsRNA, the abnormal wing disc ( awd ) gene, which is essential for adult wing formation, was successfully silenced through topical dsRNA application in fifth instar nymphs, leading to wing deformation and flight arrest in adults [29]. Successful silencing of several target genes at different insect developmental stages using various dsRNA delivery methods has been tested ( Figure 1 ). 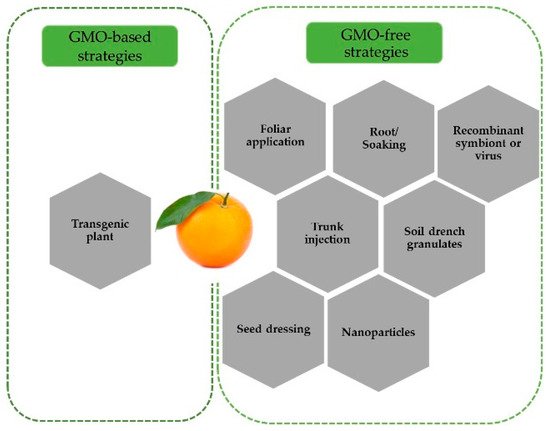 RNAi-mediated ACP control has also been tested using feeding assays. Through the ingestion of an artificial diet, several genes including cathepsin D , chitin synthase , inhibitor of apoptosis [31], boule [35], trehalose-6-phosphate synthase [38], and odorant-binding 7 [39], in ACP were silences, leading to a lethal phenotype and/or an abnormal behavioral response. Furthermore, knockdown of the arginine kinase and superoxide dismutase genes through feeding and iPS reduced the ACP adult survival rate [26]. In some other studies, despite successful gene silencing using iPS , however, dsRNA delivery through this method did not affect the insect survival rate or the expression of pterin-4-α-carbinolamine dehydratase , tomosyn , vitellogenin [26], laccase-1S , calreticulin, and Snf7 [37]. These contrasting results suggest that the RNAi-mediated ACP control also depends on target selection. Additionally, successful Snf7 silencing in Western corn rootworm ( Diabrotica virgivera ) [40] and lack of effect in ACP indicate that silencing of a target gene in one organism does not necessarily work in others.

The dsRNA characteristics and delivery methods as well as the developmental stage of the insect treated with dsRNA can directly affect RNAi-mediated gene silencing. In general, hemipterans present stronger ribonuclease action at the adult stage, leading to higher dsRNA degradation and greater insect resistance when the dsRNA is delivered through oral ingestion [41][42][43][44]. In ACP, the early developmental stages (e.g., nymphs) exhibit greater sensitivity to RNAi than the later developmental stages (e.g., adults) [33]. Indeed, topical dsRNA application resulted in successful target silencing of the awd gene [29]. In addition, the mortality of third and fourth instar nymphs increased after soaking them in a dsRNA solution targeting muscle protein 20 ( DcMP20 ) [33]. In addition, at the juvenile stages, topical dsRNA application resulted in the silencing of sucrose hydrolase ( DcSuh ), which reduced survival rate of the fifth instar nymphs and shortened the insect lifecycle duration [36]. Therefore, the application of RNAi-mediated control at the early developmental stages of ACP is essential for HLB management in citrus orchards. The fourth and fifth instar nymphs of ACP can spread the causal agent of HLB and increase the disease transmission, by spreading the pathogen as both nymphs and adults [45].

RNAi can serve as a potentially biosafe strategy to manage ACP. It can help control this insect pest through two modes of application: non-transformative (bioproduct) and transformative (transgenic plants) delivery. The non-transformative delivery presents some advantages for use in pest management because of the rapid product development, low cost, low resistance risk, and high viability for all crops [46], although there are no stringent regulations in different countries [47].

In this context, innovation systems in food and agriculture actively seek to go beyond the financial targets [48]. Building a more sustainable citrus industry for the future is essential to conserve the environment as well as respond to the demands of the food sector, which are increasingly focused on the environmental and social aspects. Therefore, exploiting cutting-edge technologies such as RNAi is essential to reduce the use of pesticides in orchards, thus generating minimal environmental impacts [41] and avoiding adverse effects on NTOs, such as pollinators. Finally, investment in scientific research is increasingly playing a relevant and significant role in promoting the citrus industry and ensuring that citrus growers continue to supply good quality fruits to the consumers and processors, overcoming the most relevant challenges in cultivation [2].