Platinum compounds such as cisplatin (cisPt) embody the backbone of combination chemotherapy protocols against advanced lung cancer. However, their efficacy is primarily limited by inherent or acquired platinum resistance, the origin of which has not been fully elucidated yet, although of paramount interest.

Since the serendipitous discovery of cisplatin (cisPt) and its anticancer properties by Rosenberg in 1965 and its subsequent approval as therapeutic in 1978, numerous platinum compounds have been synthesized and tested. However, only two more platinum-based drugs were approved worldwide since then. These two drugs were carboplatin and oxaliplatin [1]. The group of Barnett Rosenberg discovered the robust antiproliferative effects of cisPt in the late 1960s. This antiproliferative effect was explained by a complex formation between Pt(II) and nitrogen atoms of nucleotide bases (platinum-DNA adducts), that ultimately induces kinks and partial unwinding of the DNA helix [2]. This conformational change in the DNA structure halts the cell cycle and initiates programmed cell death [3][4]. Passive diffusion was considered as the sole mechanism for cisPt entering the cell [5][6]. However, in recent years alternative uptake pathways such as the Copper transporter 1 (CTR1) was identified as an important transmembrane protein involved in cisPt uptake [7][8]. Furthermore, copper-extruding P-type ATPases were found to reduce the cytoplasmic or cellular cisPt concentration [9][10]. Recently, Planells-Cases et al. [11] described that loss of LRRC8A and LRRC8D subunits of the volume-regulated anion channel (VRAC) effects cisPt uptake. Thus, the mechanisms involved in acquired resistance to cisPt likely comprise a variety of transition metal transporters and other yet unknown proteins present in mammalian cells.
Inherent or acquired platinum resistance is a major limitation to improve long-term outcomes in cancer therapy. Recent discoveries described several novel resistance mechanisms [12][13][14], which are divided into two groups. The first group demonstrates an insufficient uptake of platinum into cancer cells thus resulting in a lower cisPt concentration in the cytoplasm and a reduced amount of platinum-DNA adducts. The second group of resistance mechanisms relies on a failure of the apoptosis initiation process due to erroneous platinum-DNA adduct formation. To overcome cisPt resistance in anti-cancer therapy numerous approaches have been pursued [14]. Unfortunately, none of these approaches was implemented into clinics so far [15]. Therefore, the newly proposed VRAC as an importing channel for cisPt and carboplatin provides a novel promising target circumventing platinum-drug resistance in cancer patients [16].
With nearly 1.5 million new cases diagnosed worldwide each year, lung cancer is the most frequent diagnosed cancer in humans, the most common, aggressive, and also deadliest type of cancer worldwide [15][17]. There are two main types of this disease, non-small cell lung cancer (NSCLC) and small cell lung cancer (SCLC). NSCLC accounts for 85% of all cases and is the most common type of lung cancer [15]. The current five year survival rates are 15–20%. Among patients with NSCLC, these rates reach 90% for stage 1 but drop below 10% for stage 4. Among patients with SCLC, the rates are about 30% for limited disease and below 10% for extensive disease [18]. Chemoimmunotherapy is currently being explored to improve first-line chemotherapy doublets by adding, e.g., immune checkpoint inhibitors [19].
To date, different cisPt resistant cell lines of various cancer types have been described [20][21][22]. Recently, cisPt resistant A240286S (A24) NSCLC sublines have been established. Clinically relevant resistance grades showed resistance levels above 4.0 µM cisPt. This resistance persisted even after more than one year in absence of cisPt. However, a correlation between cisPt resistance and expression level of VRAC transporter in the A24 cell line was not confirmed [23]. Thus, loss of the VRAC transporter is obviously not the primary origin of the cisPt resistance in A24 cells. Hence, these recent findings are conflicting with previously published studies for other cell lines [11][24][25][26]. These fundamental controversies demonstrate that acquisition of transition metal drug resistance remains enigmatic to us, albeit of paramount interest. Therefore, only a comprehensive understanding of the acquisition of resistance allows for a targeted precision treatment of patients suffering from deadly lung cancer metastasis.

The concentration of cisPt was determined in sensitive A24 wt cells and cisPt resistant A24dPt8 (previously described as (D-) Pt8.0A24 [23]) single cells with cisPt exposure of 30 µM for 0, 2, 4, 8, and 16 h. After more than two years in culture lacking cisPt, the IC50 value of resistant A24 cells was re-evaluated and still revealed an IC50 of 12.74 µM. Figure 1 shows a representative section of the counts vs. measurements in sensitive A24 wt cells and resistant A24dPt8 treated with 30 µM cisPt for 16 h, respectively. 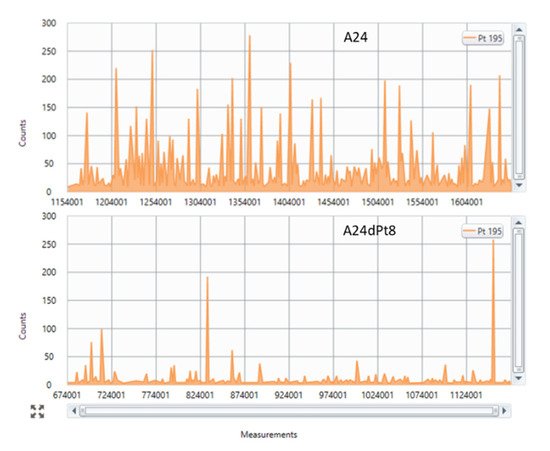 Figure 1. Single cell inductively coupled plasma mass spectrometry (SC-ICP-MS) representative sections of (Pt 195) counts versus time traces in A24 cells and A24dPt8 cells. This figure shows real-time signal processing by Syngistix. It becomes apparent that less Pt is measured in resistant cells (bottom panel) than compared to wild type (wt) cells (top panel), independent of the measured time point (x-axis). Each “intensity peak” represents accumulated Pt 195 counts for a defined time interval (dwell time) of 50 μs. Each time interval correspond to one “single measurement” (x-axis). Assumption: each peak (measurement) corresponds to one individual entity analyzed (cell, cells aggregate).
Frequency distribution plots showing cisPt masses versus number of cell events (frequency) were obtained for 0, 2, 4, 8, and 16 h in presence of 30 µM cisPt as shown in Figure 2A. Strikingly, longer incubation time, led to an increased amount of cisPt per A24 cells and in A24dPt8 cells. Additionally, varying cisPt amounts per cell were observed within A24 sublines, indicating that cisPt bioavailability of sensitive and resistant A24 cells varies within the cell population. The cellular concentration was calculated with the volume of A24 or A24dPt8 cells for each cell population (Figure 2B). Volumes up to 14,000 µm3 were measured with a mean of 3800 µm3 for A24 cells and 3200 µm3 for A24dPt8 cells. 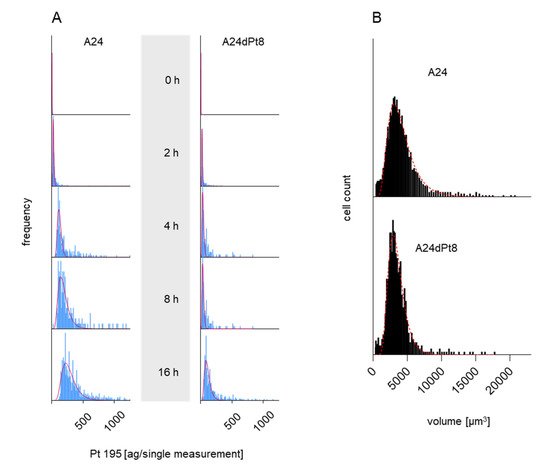 Figure 2. Frequency plot (integrated/fitted histogram; Syngistix-program PerkinElmer) of A24 and A24dPt8 cells (A) incubated with 30 µM cisPt for 0, 2, 4, 8, and 16 h. (B) Volume distribution vs. cell count (frequency). The red curves in (A) and (B) show the lognormal fit of the frequency. 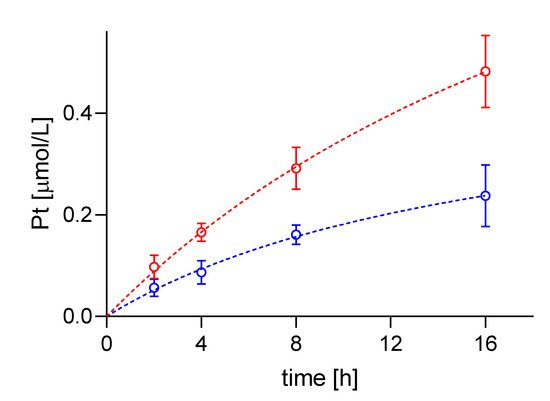 Figure 3. Timeline of cisPt uptake by --●-- A24 and --●-- A24dPt8 cells after incubation with 30 µM cisPt.
The observed ratios between the A24 and A24dPt8 cells were approximately two-fold higher in the wt cells compared to the resistant cells for each observed time point.
Comparison of cisPt concentration in A24 cells and resistant cells showed that the mean cellular cisPt concentrations per cell were significantly different. Statistical analysis was performed with a multiple unpaired t-test. Statistical significance was determined by the Holm–Sidak method with alpha = 0.05 (Holm 1979). The p values obtained were < 0.02 at 2 h incubation time with cisPt and < 0.001 for 4, 8, and 16 h, respectively.

4. Difference in cisPt Uptake between wt and Resistant Cells 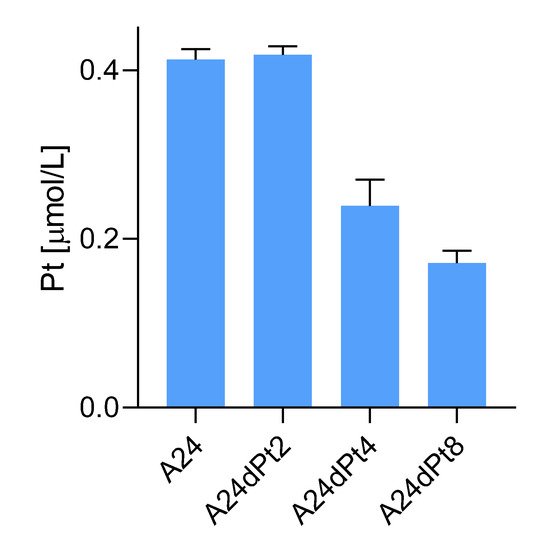 5. Difference in nuclear cisPt Uptake between wt and Resistant Cells 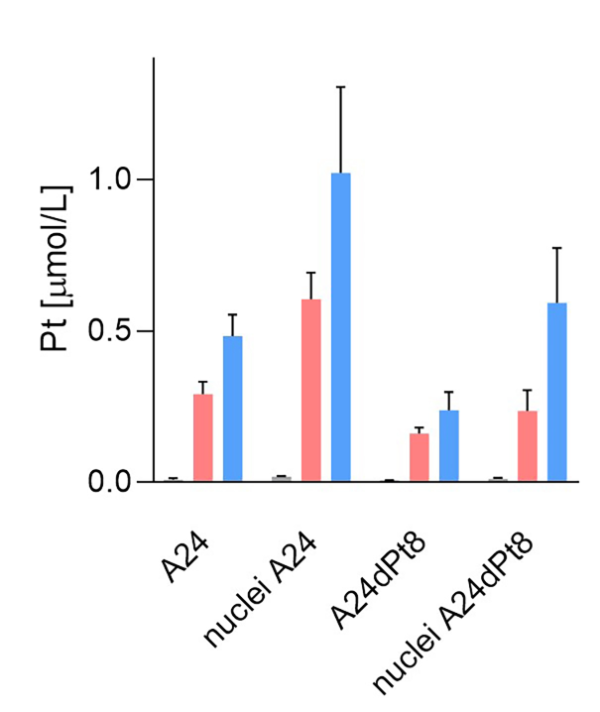