The current preclinical and clinical findings demonstrate that, in addition to the conventional clinical and pathological indicators that have a prognostic value in radiation oncology, the number of cancer stem cells (CSCs) and their inherent radioresistance are important parameters for local control after radiotherapy.

According to the global cancer statistics, cancer incidence and mortality are increasing worldwide with an estimated 29 million new cancer cases by 2030 [1][2][3][4], attributed to constant growth and aging of the human population [5]. This rapid growth of cancer rates suggests that improving diagnosis of cancer and integration of individualized treatment into the mainstream clinical practice are of utmost importance. As of now, about half of all cancer patients receive radiation therapy as a treatment modality during the history of disease [6]. The recent improvements in radiation technologies and delivery substantially increased efficiency and quality of treatment [6]. Nevertheless, one of the fundamental problems of radiation oncology is tumor resistance to radiation doses which cause an acceptable degree of normal tissue toxicity. Tumor radioresistance leads to loco-regional control failure and disease progression [7][8]. The curative potential of radiotherapy depends on its ability to cause a reproductive death of tumor cells via accumulation of non-repairable DNA lesions, thereby removing cancer cells from the clonogenic pool [9][10][11][12].
In the last few decades, studies in different fields of the biological sciences demonstrated that cancer cells are heterogeneous in their tumor-initiating properties which contribute to tumor growth and metastasis development [10][13][14][15]. Tumor cell transplantation experiments, first in isogenic murine models by Hewitt and Wilson and then in human xenograft tumor models, demonstrated that the therapeutic potential of radiotherapy is defined by the number of tumorigenic cells in these experimental tumors [9][12][16][17][18]. These findings are in agreement with clinical data for patients treated with radiotherapy; smaller tumor size was associated with longer patient survival because larger tumors might contain higher absolute number of tumorigenic cells. Together with other clinical and pathological parameters, tumor size is used for radiation therapy patient stratification [19][20].
Identification of markers for the detection of tumor-initiating cells, first in leukemia by the group of John Dick (CD (cluster of differentiation) 34+/CD38−) and then in solid tumors including glioma (CD133+, aldehyde dehydrogenase, ALDH1+), breast (epithelial cell adhesion molecule, EpCAM+/CD44high/CD24low, ALDH1+), colorectal (CD133+, EpCAMhigh/CD44+, ALDH1+), head and neck squamous carcinoma (CD44+), and other cancers as discussed elsewhere [21], paved the way for isolating, enriching, and analyzing these tumorigenic cells in different tumor entities [15][21][22]. These findings indicated that tumor-initiating cells, also called cancer stem cells (CSCs) possess two fundamental properties that make them different from other tumor cells; they have unlimited capacity to self-renew (e.g., divide asymmetrically to produce an identical copy of itself and more differentiated progeny cells) and differentiate to all cell populations present in the original tumors. These properties make these cells a root of tumor growth and recurrence and, thus, an important marker for tumor diagnosis, prognosis, and treatment, as well as critical targets for cancer therapy. Strong evidence is emerging to support the dynamic nature of tumor stemness which can be influenced by genetic alterations, epigenetic reprogramming and the tumor microenvironment [13][23]. Although tumor cell heterogeneity displays a much higher level of complexity than can be explained by the hierarchical model, CSC populations remain critical targets and biomarkers for cancer treatments.

Radiation therapy is one of the key anti-cancer treatment options along with surgery and chemotherapy [6]. However, a high inter- and intratumoral variability in the phenotypical and functional properties of cancer cells remains the major obstacle to improving cancer survival rates, which is especially true for patients with locally advanced tumors [15][24], and reliable biomarkers for patient stratification are of high demand [25]. As of today, only few biological parameters are suggested as potential biomarkers for radiation oncology including tumor size, hypoxia, or positivity for human papilloma virus (HPV) for head and neck squamous cell carcinoma (HNSCC) [11]. The biology-based patient stratification aims to select potential responders and non-responders to increase the probability of cancer cure by radiation therapy. It is based on the radiobiological concept of the “5Rs” which are repair, redistribution, repopulation, reoxygenation, and intrinsic radioresistance [26][27].
The curative potential of radiotherapy depends on the scale and quality of DNA damage in the exposed tumor tissues. Ionizing radiation induces different types of DNA damage with DNA double-strand breaks (DSBs) as major lethal DNA lesions. If the levels of radiation-induced DSBs exceed the DNA repair capacity of tumor cells, this might result in cell cycle arrest, tumor cell senescence, and death. The cell fate decision following radiation exposure depends on the amount of critical DNA damage. A low level of DNA lesions triggers DNA repair mechanisms and DNA damage checkpoints, which arrest cell cycle progression in the presence of DNA damage and allow cells to repair DNA before returning to the proliferative pool [28]. However, if the amount of DNA damage is unrepairable, the cells activate death programs [28][29]. The first “R” refers to DNA repair as one of the key determinants of tumor cell survival after radiation therapy. The cellular response to DNA damage is a complex process including activation of the DNA damage response pathways and DNA repair mechanisms as reviewed elsewhere [28][30]. In addition to direct DNA ionization, radiation-induced DNA damage is caused by highly chemically reactive species produced by radiolysis of water and by disruption of normal mitochondrial functions [30]. These chemically active molecules, called reactive oxygen species (ROS) and reactive nitrogen species (RNS), induce damage of DNA, protein oxidation, and lipid peroxidation, and might cause cell senescence and death [31]. These chemical species are regular by-products of cell metabolism and important second messengers [31][32]. Under physiological conditions, the intracellular concentration of ROS is maintained by the scavenging system which includes, e.g., glutathione, thioredoxin, and enzymatic proteins thioredoxin reductase, dismutase, peroxidase, and catalase, all of which might also shield the cells against radiation-induced oxidative stress [33].
Accumulating preclinical evidence indicates that many of these protective mechanisms are activated in CSC populations possibly resulting in treatment resistance (Figure 1). These findings also suggest that signaling pathways that control DNA integrity and repair in CSCs may serve as a promising target in cancer therapy, as discussed in the next sections of this review. 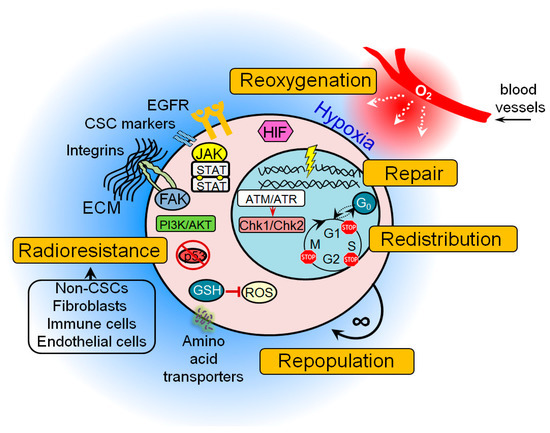 It was previously observed that CSCs, comparable to tissue stem cells, have altered DNA damage response and repair pathways (Figure 2). In tissue stem cells, the alteration of DNA repair pathways ensures error-free DNA preservation. In CSCs, on the other hand, this causes resistance to exogenously induced DNA damage that leads to the failure of tumor therapy [66][67]. After irradiation, resistance correlates with significantly less DNA damage in glioma and breast cancer stem cells [68][69][70]. This also confirms the generally accepted view that tissue stem cells guarantee the maintenance of genomic stability and CSCs ensure the survival of the entire tumor population. 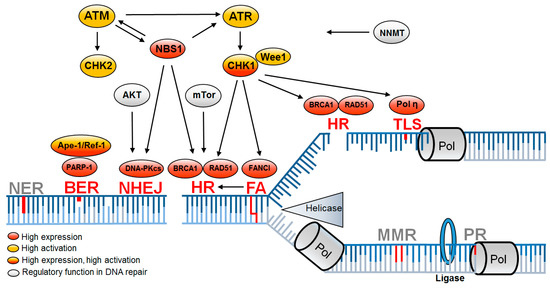 Figure 2. DNA repair pathways altered in CSCs are associated with DNA replication. Replication-associated DNA repair pathways leading to enhanced DNA repair (red) mediate resistance in CSCs, while further replication-associated DNA repair pathways remain unchanged (gray). Upregulation is based on increased expression (red) or increased activation (yellow) or both (red/yellow) and is supported by regulatory proteins (gray). BER—base excision repair; FA—Fanconi anemia; HR—homologous recombination; NER—nucleotide excision repair; NHEJ—non-homologous end joining; MMR—mismatch repair; PR—proof reading; TLS—translesion synthesis [9][68][71][72][73][74][75][76][77][78][79][80][81][82][83][84][85].
Most of the investigations regarding radioresistance and DNA repair were performed in glioblastoma. Radioresistance is mediated by enhanced activation of the two serine threonine protein kinases ataxia–telangiectasia mutated (ATM) and ATM- and Rad3-Related (ATR) and their two downstream checkpoint kinases (Chk1 and Chk2) [68][69][82][86][87]. Both kinases regulate the complex DNA damage response by initiating cell-cycle checkpoint control and activating corresponding DNA repair pathways. CD133+ glioma stem cells show an increased Chk1-dependent checkpoint response [9][69][86]. An increased expression of NBS1, a component of the Mre11, Rad50, Nbs1 (MRN) complex [88] involved in DSB sensor activity, was also detected. Increased DNA damage response and repair gene expression were also observed in CD133+ CSCs in lung carcinoma cells, breast, breast carcinoma-inducing cells, pancreatic CSCs, and non-small-cell lung cancer [41][71].
Starting point for the enhanced DNA damage response appears to be a general adaptation to increased replication stress and increased oxidative damage already in the untreated state, which leads to increased activation of the DNA damage response even after irradiation [84][89]. The DNA damage response is then mediated either by induced DSBs for amplified activation of ATM or by increased replicative stress for amplified activation of ATR. This results in a lower number of DSBs [89][90].
With regard to DNA double-strand break repair pathways in CSCs, HR is of outstanding importance, whereas, for NHEJ, only ATM-mediated effects are observed [91][92][93]. HR is the preferred DSB repair pathway in the S phase and it is more strongly activated by ATR and ATM in cells tolerating replication stress [68][72]. RAD51 overexpression, the main HR DNA repair protein, is observed in glioma stem cells and decreases at the transition to progenitor cells [92]. Glioblastoma cell lines show an upregulation of HR genes, especially RAD51, BRCA1, and BRCA2, which leads to less DNA damage after irradiation [74]. Thus, most studies suggest that resistance of CSCs manifests during the S phase by HR, regulated by MRN and activated by ATM/ATR.
The importance of S-phase repair also appears for CSC resistance mechanisms after chemotherapy in ovarian cancer. Here, resistance is observed by enhanced activation of translesion synthesis mediated by polymerase eta [79], as well as in HNSCC, where overexpression of the Fanconi anemia DNA repair proteins was observed in ALDH1-positive tumor cells [81].
However, a number of studies showed no difference or even lower DNA damage response in CSCs [41][91][94][95][96]. These contradictory observations suggest that an improved DNA damage response may not be a common feature of CSCs. More obvious is that CSCs and non-CSCs are transient populations and that, in addition to inter-tumoral heterogeneity, intratumoral heterogeneity must also be considered in DNA damage reaction functionality [96]. This was previously observed in glioblastoma, where RAD51 expression decreases from CSC to progenitor cells [92].

In CSCs, radioresistance determined by DNA repair capacity may also be attributed to lower indirectly induced ROS causing DNA damage and ROS-dependent apoptosis [14][70]. Breast CSCs express higher concentrations of ROS scavengers and neutralize radiation-induced ROS [89]. In addition to the known proteins with ROS scavenger function, the multifunctional protein apurine/apirimidine endonuclease/redox effector factor (Ape1/Ref-1) is also increasingly expressed in CSCs. Among other functions, Ape1/Ref-1 is part of the DNA repair complex base excision repair (BER), so that Ape1/Ref-1 can reduce both intracellular ROS and increase DNA repair [68]. Radioresistance in mesenchymal CSCs indirectly influencing DNA repair capacity could also be due to nicotinamide N-methyltransferase (NNMT) overexpression through depletion of the accessible amounts of nicotinamide, which is a known inhibitor of cellular DNA repair mechanisms [85].
An additional resistance mechanism only indirectly linked to improved DNA repair is the induction of CSC quiescence. By stopping the cells in the G0 phase, DNA damage can be eliminated before entering the S phase [44][97]. This shift in the cell cycle distribution may explain why NHEJ was considered important for increased radiation resistance in recent studies [68][76][98][99][100].
Another observed phenomenon indirectly linked to DNA repair mediated resistance is that genotoxic treatment, such as irradiation and chemotherapy, itself leads to the reprogramming of non-CSCs into CSCs [22][75][83][101][102][103][104][105]. In reprogrammed stem-like cells, either a faster repair mediated by BRCA1 and RAD51 after gemcitabine in pancreatic cancer [75] or a stronger activation of ATR/Chk1 in colon carcinoma after treatment with DNA interstrand-crosslinking (ICL) agents was shown [83]. Zhang and colleagues even went so far as to postulate a direct dependence of the DNA signaling cascade and stem-cell characteristics. They observed an ATM-mediated stabilization of zinc finger E-box binding homeobox 1 (ZEB1) leading to an enhanced Chk1-dependent DNA damage response in previously epithelial breast cells [104]. This direct dependence on stem cell character and HR or S-phase DNA repair was also observed for breast epithelial cells. Depletion of BRCA1 and FANCD2 led to reprogramming in breast epithelial cells to mesenchymal phenotype [105].