Some pathogens pose significant natural hazards for wild bird populations [1], and they even have potentials for outbreaks in humans, especially when ecosystems and thus regulatory ecosystem services are depleted [2]. Raptors, as predators at the top of the food chain, are particularly good environmental sentinels for detection of wildlife zoonosis [3]. However, the prevalence, transmission, and impacts of viruses in free-ranging raptors are still a poorly understood phenomenon, and this is probably reflected in cumulative effects in raptor mortality and fecundity combined with other environmental impacts [4][5], as well as individual variation [6].
Diverse herpesviruses have frequently been found in different free-living bird species [7][8][9][10][11]. In owls, herpesvirus was discovered in the 1970s [12], later known as Strigid herpesvirus (StHV 1), and it has been reported in captive and free-ranging owls in Asia, Europe, North America, and Australia [10]. General, all avian herpesviruses are members of the genera Iltovirus and Mardivirus of the subfamily Alphaherpesvirinae. However, many viruses detected in wild birds have not been completely characterized, including StHV 1, and therefore has not been approved as species and are marked as other related viruses which may be member of the family Herpesviridae [13][14].
The clinical signs of herpesviruses infections in owls, known as inclusion body disease or herpesvirus hepatitis, appear as general depression and anorexia before death or sudden death [15]. In addition, more specific clinical signs such as ulcerative superficial keratitis, proliferative conjunctivitis, and iris pigmentary changes have been described [16]. Hepatitis and disseminated focal necrosis in the liver, spleen, and bone marrow are most commonly seen in owls dying of herpesvirus infections [13]. The actual impact of herpesvirus on the wild owl population became apparent in cases of repopulation of eagle owls (Bubo bubo) where serologically herpesvirus-negative birds released back to the wild led to the establishment and expansion of the population [17]. Earlier studies of owl herpesvirus in Europe reported that, on the one hand, the virus can be lethal to some owl species but non-infective to some others, especially species with dark eyes (i.e., the tawny owl (Strix aluco) and barn owl (Tyto alba) [18][19]), while the third European owl species with dark eyes, the Ural owl (Strix uralensis), was not tested. A later study, which included Ural owls as well, did not confirm this hypothesis but indicated that polymorphic species are seemingly more resistant than the species showing lower variability in overall plumage color [11]. However, all of these studies were conducted on dead or injured birds from wildlife rehabilitation centers or birds in laboratory experiments rather than in free-living wild populations.
The viral DNA polymerase is a key enzyme in the lytic phase of the infection by herpesviruses [20]. PCR assays [21][22] with degenerate primers for amplification of the herpesvirus DNA polymerase gene sequence have shown tremendous effectiveness in detecting previously unknown herpesvirus [23]. Based on a partial herpesvirus DNA polymerase sequence phylogenetic study showed that herpesvirus in owls and herpesvirus endemic in the pigeon population—namely, Columbid herpesvirus 1 (CoHV 1)—are the same virus, and that the pigeons are responsible for transmission of the virus to the owls [7][24]. However, a recent study of phylogenetic analysis of herpesvirus DNA polymerase partial nucleotide sequences detected in dead owls showed that owls were also infected with herpesviruses that are divergent from CoHV 1 [11]. In general, inhalation of virus-containing dust derived from feathers, nasal excretion, saliva, nasal discharge, urine, feces, and crop milk is the predominant means of herpesvirus transmission in birds, and no vertical transmission has been proven [25].

The partial sequence of herpesvirus DNA polymerase gene was detected only in oropharyngeal swabs in 16 out of 170 owls examined (9.4%). However, the herpesvirus was detected only in Ural owls, in adults and young, but not in tawny owls (Table 1). Out of 45 Ural owls from Mount Krim, 14 were positive (31.1%), and out of 10 Ural owls from the Jelovica Plateau, 2 were positive (20.0%), but the infection prevalence was not significantly different between the areas (χ² = 0.11, p = 0.74). The infection prevalence was found to be higher in young than adult birds, although the difference was not significant (χ² = 0.59, p = 0.44). We found that about half of the Ural owl nests were infected (Table 1), but we did not necessarily confirm infection in all birds from each infected nest. The herpesvirus prevalence was found to be similar in adult females (22.2%, n = 9) and males (16.7%, n = 6). In the nests with more than one young, of which at least one was positive (n = 5 nests), the median herpesvirus prevalence in the young was 50.0% (range 20.0 to 100.0%). In the nests with tested breeding female and chicks, all chicks were infected when female was positive (n = 2 nests), while positive chicks were found also in the nests with females found negative for herpesvirus infection (n = 4 nests). In one nest in 2019 on Mount Krim, the Ural owl pair successfully raised one Ural and one tawny owl young, which was a consequence of competitive expulsion of the tawny owl by the larger Ural owl from the nestbox. Both Ural owl parents were herpesvirus positive as well as the Ural owl young, but not the tawny owl young raised in the same nest. All the owls sampled were clinically healthy, and the productivity and clutch and brood size between infected (median 4.0/3.5) and uninfected nests (median 3.5/3.0) was similar (Mann–Whitney U = 20–23, p = 0.6–1).
Table 1. Herpesvirus prevalence (% of infected among all tested birds/nests) in wild coexisting populations of tawny owls (Strix aluco) and Ural owls (Strix uralensis) in Slovenia in 2017 and 2019. The numbers of birds or nests examined are given in parentheses.
In 2019, 40 yellow-necked mice captured at Mount Krim and the Jelovica Plateau were examined for the presence of herpesvirus. Pharyngeal and rectal swabs and tissue samples were analyzed with panherpesvirus PCR targeting the DNA polymerase gene. Of 40 free-living mice examined, 2 were herpesvirus positive (5%). 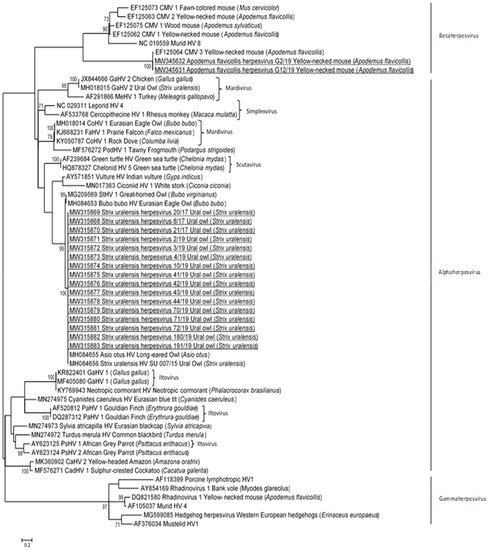