In managing human diseases, the biological forms of vaccines play a prominent role in activating the host’s adaptive and innate immune responses. Vaccines are commonly used as a prophylactic treatment for infectious diseases and have recently been used as therapeutic agents for cancer [1][2][3][4]. Recent developments in cancer nano-vaccines and their prime role on host immune systems have generated interest among chemical and biomedical engineers in producing novel targeted nanomedicine-based vaccines for priming the body’s immune defense to elicit anti-tumor responses [5][6][7][8]. For prospective applications, nanoparticulate adjuvants such as polymeric nanoparticles have been shown as promising antigen delivery vehicles for site-specific, targeted vaccine delivery [9]. In combination with therapeutic adjuvants, targeting agents, and immuno-therapeutic molecules, polymeric nanoparticles become potential functional candidates for therapies [10][11][12][13].
Cancer is one of the deadliest diseases and kills millions of people every year across the globe. According to the Global Cancer Observatory (GCO), an interactive web-based platform, approximately 10 million cancer deaths and 19.3 million new cancer cases were expected globally in 2020 [14]. There are a variety of cancer therapeutic approaches that exist. Among these, chemo-, photo- (thermal, dynamic), radio-, and immuno-therapies are the most evolved to target tumor cells at their sites and inducing cell death [15][16][17]. Despite good signs of progress in cancer therapeutic approaches, drug resistance, recurrence, low therapeutic responsiveness, and non-specific toxicity with undesired side effects are major concerns noted in current cancer therapies [18][19][20]. The advent and success of immuno-therapeutic strategies via applying nanomaterials are promising for patients by extending their life span. Immuno-therapeutic approaches have advantages in reducing the overall burden of primary tumors and metastatic lesions [21]. Currently, clinicians consider immunotherapy as a gold-standard treatment choice for many cancer types [22][23]. Hence, the development of various immuno-therapeutic nanoengineered antibodies and therapeutic molecules is the current focus of research for successful treatments [24].
Currently, engineered antibodies are used to induce immune stimulation via blocking the immune checkpoints to show anticancer responses. The use of antibodies in combination with selective delivery approaches using various polymeric nanomaterials with functionalized nanocarrier systems would be a beneficial approach, and this could profoundly increase the success of treatment towards clinical applications (Figure 1). The multifunctional immunomodulatory role of nanomedicine in cancer immunotherapy is subsidizing the field of nanomaterials in immunology. Thus, the innovative developments of nanomedicine and immunotherapy through combined nanomaterial systems can enhance immunomodulatory functions in the subsequent stages of polymeric vaccine manipulations for clinical use. Occasionally, autoimmune diseases can show some unpredicted side effects in cancer immunotherapy. Polymeric nanomaterial-based cancer immuno-therapeutic strategies are shown to be more effective against hematological malignancies than solid tumors. This is mainly due to their low effectiveness in tumor penetration through their abnormal extracellular matrices, endothelial barriers, and distinct tumor microenvironments (TMEs) [25][26]. By developing highly effective polymeric nanomaterials with precise targeting of TMEs across the endothelial border, it is possible to improve the efficacy of cancer immunotherapies in solid tumors. 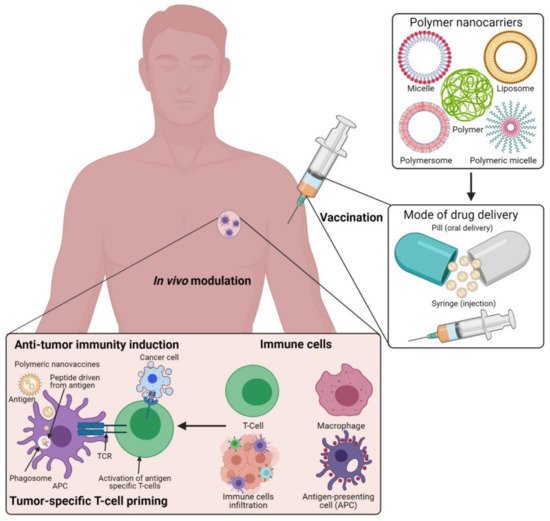 Figure 1. Schematic illustration of the polymeric nanocarrier systems as adjuvants for cancer vaccine deliveries and triggering host-immune-response-mediated cell death in vivo. (Images were created with the help of BioRender.com, accessed on 15 August 2021).
In recent years, engineered polymeric nanoparticles have been extensively used as a novel drug delivery platform for achieving safe and effective cancer immunotherapy [8][23][27]. The tumor immune responses and long-lasting tumor suppression effects can be achieved via vaccines like immuno-therapeutic agents, which have attracted clinicians to utilize them for their beneficial effects [28][29]. The target-specific anti-tumor immune functions of the polymeric nanoparticles can also be improved via introducing aromatic amino acid mutations in genetically encoded regions of the tumor target-specific neoantigens (non-self-peptides) [26][30]. Thus, the polymeric nanocarriers with engineered cancer neoantigen-based (cancer-specific differentially expressed antigens) vaccines have been widely used for immunotherapies via reducing autoimmunity while enhancing cytotoxic T lymphocyte (CTL) responses [27][31]. Similarly, dendritic cells (DCs) that activate antigen targeting and ligand presentation to conquer neoantigen-dependent cancer vaccines have been used to improve therapeutic functions [32][33]. It has been proven that DCs and immune regulators of type-I interferons (e.g., IFN-γ) are predominant molecules that link the innate and adaptive immunity in patients for the uptake and exposure of naive T-cells in the activation of tumor-specific CTL responses [34][35]. Several reports in cancer nanomedicine-based drug delivery approaches have revealed the functions of polymeric nanoparticles in the activation of stimulator of interferon genes (STING) and toll-like receptors (TLRs), thereby enhancing the CD8+ T-cells in preclinical animal models via stimulating the STING mechanistic pathways [36][37][38][39][40].

2. Evolution of Polymeric Nanomaterials and Their Engineering Strategies in Cancer Immunotherapies

Many clinical pathologies have improved immuno-therapeutic applications by the use of polymeric nanomaterials. However, understanding the mechanisms behind cancer immunity is an urgent need for deciding on suitable strategies for cancer immunotherapies [41][42]. In recent years, advancements in polymer science and nanotechnology have provided approaches to improving cancer immunotherapies. Multidisciplinary fields bridging chemistry, physics, biology, engineering, and medicine have helped design, synthesize, and characterize nanomaterials and extend their applications in various immunotherapies. Upon considering this, the biomedical investigations and the rapid developments of polymer-based nanoparticles and their deep understanding in medical fields have resulted in their clinical applications, including in cancer treatment. The potential of polymeric nanoparticles is extensive due to their unique and multifaceted functions, including adjustable surface area, easy tunability for cell-materials, and cell–chemical–biological interactions to accommodate higher drug contents during drug delivery applications [43]. The prominent phenomenon of polymeric nanoparticles is the easy surface functionalization for achieving precise target-tissue biodistribution and blood clearance upon circulation [44]. In addition, polymeric nanoparticles could also exhibit different functionalities via the incorporation of theranostic molecules such as fluorescent probes, drug conjugates, or antibody–drug conjugates. These molecules can be easily coupled onto the surfaces of the polymeric biomaterials [45][46].
The use of polymeric nanoparticles combined with metal nanoparticles to deliver cancer immunotherapies has already been approved for clinical applications and many are currently undergoing clinical trials [47]. The organic and inorganic nano biomaterials possess higher biocompatibility with reduced side effects when modified with bio-functional polymers. In addition, several organic nanoparticles with polymeric modifications have been under investigation for clinical applications as vaccines, as a means to prolong drug delivery systems, and as biocompatible dermal and tropical drugs. Likewise, the intravenous delivery of organic nanomaterials is also efficiently utilized for cancer immuno- and gene therapies [48][49]. Organic nanomaterials with the modifications of polymer materials, especially for immunotherapy, have shown broader and more prolonged success rates in preclinical models because of their increased biocompatibility with targeting efficiency [50]. Despite these, the biologically engineered polymer nanomaterials modified with organic polymers have demonstrated long-term safety with less accumulation in clearance organs such as the kidney, liver, and spleen. Hence, the utilization of polymer-based engineering approaches to make multifunctional nanoparticles has evolved to show promising delivery vehicles with increased drug loading capacity, controlled delivery, antibody targeting, and targeted accumulation at the localized TMEs as switchable candidates during therapeutic applications [51]. Upon considering all these factors, designing a polymer nanoparticle-based vaccine will always require an antigen as a primary vital content that is generally present in a short-peptide form to trigger the adaptive host immune responses [52]. Moreover, a long-lasting and robust immune response could also be achieved through natural killer (NK) cells [53]. Thus, developing the polymeric vaccine as a potential cancer immuno-therapeutic agent to effectively internalize via tumor homing and penetration through cell membranes is of immediate need for expanding this field in cancer immunotherapies.

The prerequisite of polymeric nanoparticles in cancer immunotherapy is to induce many signaling events of cancer cells to achieve treatment outcomes [54][55]. The cancer immunity cycle (Figure 2) plays a significant role in activating immunotherapy responses in the tumor to remove cancer cells or alter the TME by releasing tumor antigens. Upon delivery of polymeric nanoparticles to the tumor site, the cancer cells undergo numerous biological changes to induce apoptosis-mediated cell death pathways and release cancer antigens for further immune activation to induce CTL responses. The released cancer cancer-specific antigens are presented by the antigen-presenting cells (APCs) in the context of the major histocompatibility complexes (MHCs) [56]. MHCs play a prime role in the immune system by enhancing the modulatory functions in the infected cells during vaccination. MHCs have a highly pronounced cell surface display of intracellularly derived proteins and peptides for immune activation. Furthermore, the MHCs presenting dendritic cells (DCs) and tumor antigens stimulate the activation of immature T-cells in the lymph node to trigger the tumor-specific CTLs and natural killer (NK) cells which allow them to control cellular events and identify TMEs in tumorigenesis [32][57][58]. CTLs effectively communicate with the T-cell signaling molecules of the receptors and MHCs to attract tumor cells. 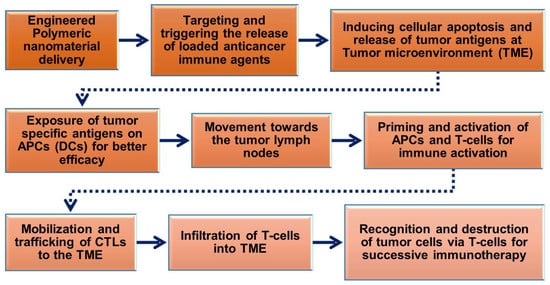 Figure 2. Schematic flow chart showing the roles of engineered polymeric nanomaterials in the activation and regulation of cancer immunotherapy via modulation of tumor microenvironments (TMEs).
Furthermore, polymeric nanoparticles facilitate T-cell-mediated cellular apoptosis, which eventually stimulates the release of cancer antigens to boost further immune responses [43][48][58]. This could maintain the events that promote specific immunity to cancer, which can also be disturbed through multiple barriers that reduce the immuno-therapeutic mechanisms. In addition, the pro-inflammatory responses from the polarized macrophages (M1) [59] are highly involved in regulating and killing tumor cells via the production of immunosuppressive cytokines [60]. As shown in Figure 3, the various forms of delivered polymeric nanomaterials can facilitate the internalization of APCs through modulating migration, uptake, and maturation in the weakly acidic TMEs. This could further enable the production of tumor antigens that enhance NPs’ immunomodulatory potential, such as through reducing regulatory T-cell population, DC activation, and macrophage repolarization (M2 to M1) to induce immunogenic cell death (ICD). These actions are potentiated in the TMEs through the regulation of various cytotoxic T-cell-associated immune modulations and encouraging immunotherapies (Figure 2 and Figure 3). Immunosuppressive candidates such as PD-1, PD-L1, and CTLA-4 are involved in decreasing tumor cell proliferation. These conditions may be involved in reducing the immuno-therapeutic efficiencies that are the cause of the existing problems with current cancer immunotherapies [61][62]. Nanomaterials, including polymeric nanoparticles could intervene in these conditions, to boost cancer immunity towards successive immuno-therapeutics [63][64]. 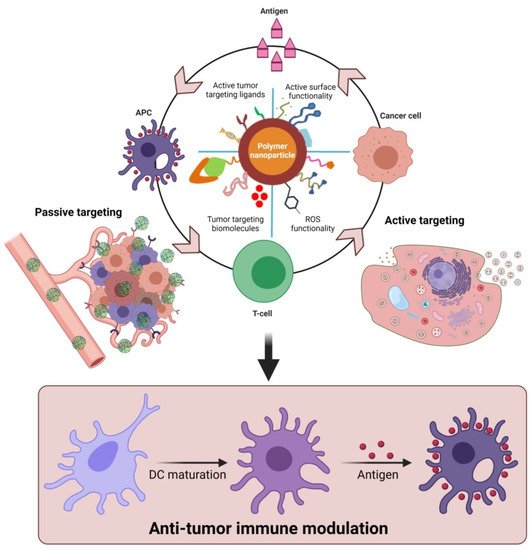 Figure 3. Proposed role of functional polymeric nanomaterials with immunostimulatory molecules in regulating anti-tumor potential upon delivery as cancer-specific vaccine systems. The delivery of polymer nanomaterials could enhance the tumor-specific immune modulation and improve anti-cancer responses via activation of DCs. (Images were created with the help of BioRender.com, accessed on 15 August 2021).