Marine dissolved organic matter (DOM) holds ~660 billion metric tons of carbon, making it one of Earth’s major carbon reservoirs that is exchangeable with the atmosphere on annual to millennial time scales. The global ocean scale dynamics of the pool have become better illuminated over the past few decades.

Dissolved organic carbon (DOC) makes up the second largest bioavailable pool of carbon in the ocean (~660 Pg C (1 Pg = 1 × 109 metric tons); [1]) and is second only to the ~50× larger pool of dissolved inorganic carbon. The size of the reservoir, and its complementary functions as a sink for autotrophically fixed carbon and as a source of substrate to microbial heterotrophs, indicate that DOC plays a central role in the ocean carbon cycle [2]. Identifying the details and mechanisms of that role in the global ocean remains a great challenge; with relevance to this Special Issue, the contribution of marine gels to those mechanisms is essentially unknown. While a critical percentage of DOC (varying from 10% in the coastal ocean [3] to 30% in the Arctic [4]) assemble as microgels (Orellana and Hansell, this issue), their importance in DOC basin-scale dynamics is just beginning to be understood [5]. Marine gels are three-dimensional (3D), colloidal- to micrometer-sized hydrogel networks held together by Ca2+ ionic bonds/hydrophobic bonds that assemble spontaneously from marine dissolved biopolymers [3][4][5]; they have been proposed to play a pivotal role in regulating ocean basin-scale biogeochemical dynamics [6].

DOC concentrations in the ocean (Figure 1) range from a deep ocean low of ~35 μmolC/kg (in deep waters of the Pacific that were last exposed to the atmosphere and sunlight more than a millennium previously) to surface ocean highs of >80 μmolC/kg, with the highest concentrations commonly found in river-influenced coastal waters [1].
Bulk DOC in the ocean is operationally resolved into at least three fractions, each qualitatively characterized by its biological lability [7]. All ocean depths contain (1) the very old, biologically refractory DOC (RDOC concentrations <45 μM and bulk radiocarbon ages of >6000 years) [8]. The RDOC distribution is controlled by the global deep overturning circulation and is thus relatively homogeneous in the deep ocean (Figure 1, note blues and pinks). Built upon the refractory DOC, at intermediate (to 1000 m) and upper layer depths, is (2) material of intermediate (or semi-) lability (SLDOC; lifetime of months to years; note greens, yellows, and reds in Figure 1). It is this material that has recently (years) accumulated in the surface ocean and that is then mixed downward into the ocean interior, thereby reducing the vertical concentration gradient and contributing to carbon export (i.e., the biological carbon pump; note great depth of green colors in the far left (near Iceland in the North Atlantic) of Figure 1). Concentrations of this fraction are commonly 10–30 μmolC/kg in the stratified upper ocean, and near zero in the deep ocean, indicating that it is susceptible to removal over decades. The most biologically labile fraction of DOC (3), with lifetimes of days to months and concentrations of just a few to 10′s of μmolC/kg, is largely limited to the sunlit layer of the ocean, where it is produced by autotrophs daily [2].

Figure 1. Vertical distribution of DOC (μmolC/kg) along ocean sections A16 and P16 in the Atlantic and Pacific Oceans, respectively (locations given in Figure 2). Data density is low in the Southern Ocean along the section connecting the southern termini of A16 and P16, hence the gap in coverage. Solid arrows schematically indicate the major overturning circulation pathways in the ocean, specifically NADW, AABW, AAIW, and PDW. The dashed arrows represent the apparent pathways of sinking biogenic particles (exported from the surface ocean) that disaggregate while sinking, in turn adding DOC to the deep-water column. This enrichment serves as a substrate to heterotrophs (including prokaryotes) living in the greatest depths of the ocean. Note the vertical alignments of DOC enrichment adjacent to those arrows due to the disaggregation and solubilization of particles. NADW = North Atlantic Deep Water; AABW = Antarctic Bottom Water; AAIW = Antarctic Intermediate Water; PDW = Pacific Deep Water.

There are two important perspectives taken when considering the distribution of DOC in the global ocean [1]. The first is in the wind driven upper layers; the wind forcing of the water column is at its strongest up to ~200 m depth, but it is still significant to depths up of 1000 m in some locations. The second is at greater depths (the deep ocean).

The distribution of DOC in the upper ocean is given in Figure 2. 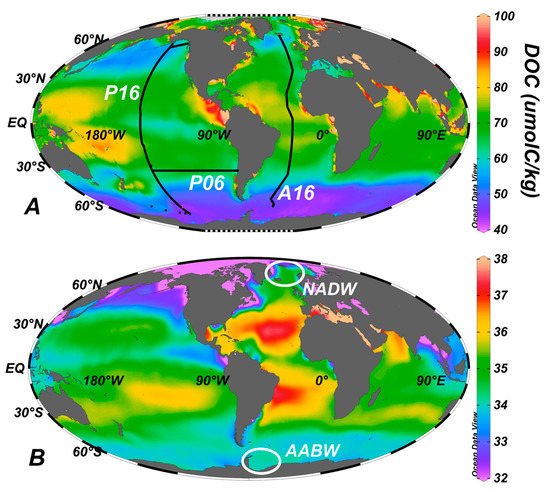 It is important to note that concentrations of DOC in the surface ocean are not indicators of net DOC production rates in those locations. Instead, the rates of production are typically low in the most stratified waters (where DOC is elevated) because of the generally low nutrient concentrations there (i.e., oligotrophic conditions). It is largely the high vertical stratification existing in those nutrient impoverished waters that allows DOC to accumulate to elevated concentrations. The ocean systems producing DOC at the highest rates are typically found where the net productivity by autotrophs is high (i.e., eutrophic upwelling ocean systems) [12]. However, concentrations of DOC in upwelling systems are not typically high because the upwelled waters start with low initial DOC concentrations. However, the change in concentrations because of the upwelling can be large. In Figure 3, we see the vertical distributions of DOC (Figure 3A) and the nutrient phosphate (Figure 3B) off the coast of Chile in the South Pacific. Upwelling is evident by the uplift of high nutrient waters at the coast (note arrow in figure). Phosphate concentrations decrease upon reaching the euphotic zone due to net community production (NCP) in the system. One of the products of marine NCP is DOC; it increases in concentration (in the vertical) at the coast by ~10–15 μmolC/kg (from ~200 m to the surface). Net DOC production, as a function of NCP, is predictable [12][13][14]. 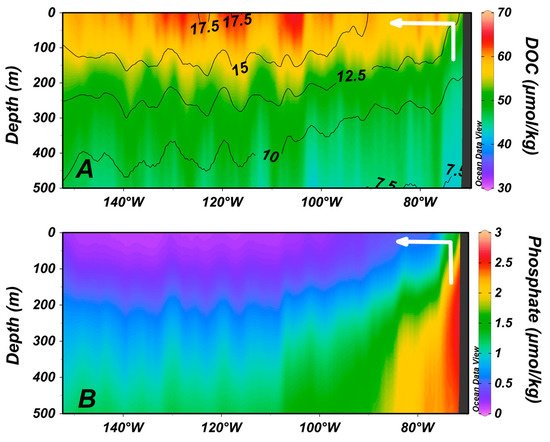 5. Export of Surface Accumulated DOC to Depth with the Ocean’s Overturning Circulation

DOC accumulated in the upper ocean is susceptible to export down into the ocean interior by overturning circulation [1][15][16][17]. Such export occurs if the waters enriched in DOC reach the ocean zones that are seasonally made dense enough (through cooling or salinification) to be overturned, thus contributing to surface DOC export to the intermediate/deep ocean. To highlight the process, two ocean regions that are important for deep water formation are shown in Figure 2B.

Biogenic organic particles sinking from the surface ocean likewise will introduce DOC to great depths [18][19][20][21]. Evidence for input by this mechanism is seen in Figure 1 (note dashed vertical arrows in the deep Pacific). The arrows are placed over small DOC enrichments (relative to surrounding waters) aligned vertically in the water column. As the particles sink, various biological and abiotic processes lead to their disaggregation and solubilization, with some of that material appearing as DOC [22]. This newly added DOC apparently has a limited lifetime (months) [21] because it serves as a substrate to the deep heterotrophic microbe populations [23].

Dissolved organic matter (DOM) in the ocean can be categorized into two fractions based on radiocarbon ages and molecular composition. The first fraction is freshly produced, phytoplankton-derived DOM that is largely composed of classical biomolecules of known building blocks, such as polysaccharides, proteins, and lipids [24]. This is the material that is initially released by autotrophs in the euphotic zone, leading to accumulation there, and it is the material released into the deeper water column by sinking particles.

The balance of oceanic DOC (97%) has a much greater radiocarbon age (>4000 years) and is absent in the classical biochemical character of the modern fraction. Most of the dissolved organic compounds in this older fraction have low molecular mass (<1000 Da) [25], and the chemical diversity is analytically challenging to characterize; the molecular structure of only a minor fraction of all of the compounds present is known.