Cardiac glycosides are natural sterols and constitute a group of secondary metabolites isolated from plants and animals.

Globally, the incidence and mortality of cancer are forecast to rise to 19.3 million cases and 10 million deaths in 2021, making it the second most prevalent cause of death. According to recent reports, female breast cancer (11.7%) has been the most commonly diagnosed cancer, followed by lung (11.4%), colorectal (10%), prostate (7.3%), and stomach (5.6%) cancers. Lung cancer is the highest cause of patient deaths, with an estimated 1.8 million deaths (18%), followed by colorectal (9.4), liver (8.3%), stomach (7.7%), and breast (6.9%) cancers [1]. Some common reasons for cancer include spontaneous or environmentally-induced accumulation of genetic and epigenetic aberrations in the genome, leading to an uncontrolled proliferation of tumor cells [2][3]. It can also result from dysregulation in transcription regulating network proteins such as transcription factors (TFs). TFs are among the most prominent regulatory proteins that bind to specific DNA sequences and regulate gene expression by influencing RNA polymerase activity [4][5]. Thus, researchers worldwide are exploring novel therapeutics that can target these unique mutations in the genome while avoiding the systemic toxicity typical of the traditional chemotherapeutic approach.
In the search for novel therapeutic agents for cancer treatment, natural compounds have always been a focus of scientific attention, and this interest continues to grow. Interest in natural compounds is attributed to several factors such as the minimal side effects compared to chemo or radiation therapy, an extensive array of chemical diversity, and the ease of access and bioprocessing [6][7]. Natural bioactive fractions and pure compounds derived from plants are widely used to treat multiple cancers [8]. In recent years, myriads of plant-derived compounds with anticancer properties were identified that could specifically act on various pathways to inhibit carcinogenesis. Some phytochemically derived anticancer compounds like calebin A, nobiletin, garcinol, CG, and many others target TFs precisely [9][10][11][12]. Cardiac glycosides (CGs) are of particular interest because of their potential as drug repurposing candidates derived from plant and animal sources and are used in various human ailments [13]. CGs are principally involved in the inhibition of the Na+/K+ ATPase pump during muscle contraction in heart failure, and thus, they are clinically approved for the treatment of cardiovascular diseases [14]. Interestingly, the roles of CGs have also been explored for broad application in various cancers. CGs exhibit selective cytotoxic effects on tumor cells; thus, their potential for use as anticancer molecules has increased [15]. Some of the potent inhibitors of cancer cell growth from the group include digitoxin, peruvoside, strophanthidin, bufalin, and ouabain; the principal use of CGs today comes from their ability to inhibit Na+/K+ ATPase pump. However, studies related to the specificity of Na+/K+ ATPase pump in cancer cells have primarily been undertaken to identify its impact on immunogenic cell death that stimulates the cognate immune response.

CGs are widely distributed naturally-derived cardiotonic steroids obtained predominantly from various plants and amphibian sources and considered highly useful in cardiac and cancer therapeutics [16][17]. Structurally the CG drugs are composed of glycone (sugar) and aglycone (steroid) moieties [18]. The core structure of the CG is characterized by the presence of lactone-containing substituent at the β-17 position (butyrolactone or α-pyrone) and a sugar moiety at the β-3 position of the steroidal core [19]. The CGs aglycone moiety is composed of a steroidal nucleus, and the lactone ring of the aglycone moiety regulates the functional activity of the CG [20]. Besides, the glycone moiety regulates the toxicokinetic and toxicodynamic profiles of the CGs. The most commonly occurring sugars within the glycone moieties are glucose, fructose, galactose, glucuronide, mannose, rhamnose, and digitalose [21][22][23]. The overall potency of the CGs is influenced by the type of sugar attached to the steroid [21]. The addition of the rhamnose was reported to enhance the potency of the CG compound 6 to 35 times. In contrast, the addition of mannose did not exhibit any significant effect on potency [24]. Depending on the R group at position 17, the CGs are structurally classified into two types: (i) cardenolides and (ii) bufadienolides [18]. The cardenolides (lactone 2-furanone) are characterized by the presence of unsaturated five-membered butyrolactone ring at position C-17, and the bufadienolides (lactone 2-pyrone) are identified by the presence of the doubly unsaturated six-member α-pyrone ring.
Previous literature has documented the presence of CGs in the seed, leaf, stem, root, and bark of several plant species, acting as a significant source of arrow poisons and widely distributed in Africa, Asia, and South America. The cardenolides were confined to the angiosperms and abundantly present in Apocynaceae and Asclepiadaceae [18]. Additionally, they were also reported to occur in Brassicaceae, Fabaceae, Malvaceae, Solanaceae, Cruciferae, Sterculiaceae, and Euphorbiaceae [25]. Furthermore, the bufadienolides were found in the plant families, including Crassulaceae, Iridaceae, Hyacinthaceae, Melianthaceae, Ranunculaceae, Santalaceae, and animal sources including toads, fireflies, and snakes [25]. Some of the widely known and characterized CGs include digoxin, digitoxin, ouabain, oleandrin, calotropin, thevetin, convallatoxin, bufalin, marinobufagenin, and telocinobufagin [18][23]. The cardenolides like digoxin and digitoxin were derived from the foxglove species Digitalis lanata and Digitalis purpurea. The African arrow poison ouabain was found in species belonging to the genera Acokanthera and Strophanthus. The toxic oleandrin was obtained from the Apocynaceae plant species called Nerium oleander [26]. The milkweed species belong to Asclepias, and the family Asclepiadaceae, which is reported to produce the toxic cardenolide calotropin. Besides, a poisonous CG like thevetin was found in the South American ornamental shrub Cascabela thevetioides (Kunth) [27], and convallatoxin was reported in the plant Convallaria majalis [28]. The cardiotonic steroid bufalin was found in the dried venom obtained from the parotoid gland of the Chinese bufo toad, and steroids including marinobufagenin and telocinobufagin were isolated from the skin sample secretions of the Brazilian toad, Bufo rubescens, and the giant neotropical marine toad Rhinella marina [29][30].

3. Mode of Action of Cardiac Glycosides

For several decades CG drugs were used in cardiology as folk medicines, diuretics, and emetics to treat cardiac congestion and cardiac arrhythmia [23]. The CG steroids affect cardiac contractility by targeting the cellular Na+/K+ ATPase pump. The inhibition of Na+/K+ ATPase pump (Figure 1) leads to intracellular retention of Na+ and subsequently induces the concentration of intracellular Ca2+ ion mediated by the effect of Na+/Ca2+ membrane exchanges [31]. The elevated level of intracellular Ca2+ concentration causes inotropy and bradycardia. Besides, the accumulation of intracellular Na+ and Ca2+ result in the membrane and ventricular ectopy [31]. 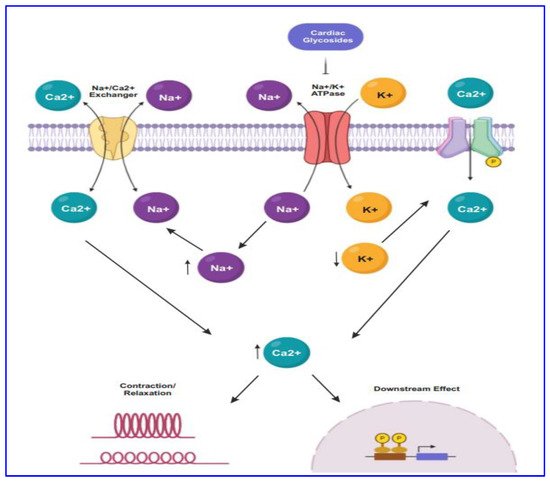