This review summarizes the current status, operating principles, and recent advances in high-temperature polymer electrolyte membranes (HT-PEMs), with a particular focus on the recent developments, technical challenges and commercial prospects of the HT-PEM fuel cells. A detailed review of the most recent research activities has been covered by this work, with a major focus on the state-of-the-art concepts describing the proton conductivity and degradation mechanisms of HT-PEMs. Also, the fuel cell performance and the lifetime of HT-PEM fuel cells as a function of operating conditions have been discussed. In addition, the review will highlight the important outcomes found in recent literature about the HT-PEM fuel cell. The main objectives of this review paper will be as follows: (1) the latest development of the HT-PEMs, primarily based on polybenzimidazole membranes, (2) the latest development of the fuel cell performance and the lifetime of the HT-PEMs.

Sufficient access to clean energy sources is one of the ongoing key challenges for global development that directly impacts industrial development, economic growth, and human well-being. Historically, the energy sector is widely dominated based on fossil fuels (such as petroleum fuels, natural gas, coal, etc.) which are the primary source of carbon dioxide (CO2) and the other greenhouse gases emissions to the environment. This has fundamentally driven a global climate change that has been accelerated over the past few decades and hence needs significant and immediate actions in order to alter both the energy sources and energy conversion techniques. There is a growing movement by the research and manufacturing communities to alleviate the impact of the petroleum-based economy by developing clean energy sources for implementing an alternative hydrogen-based economy [1][2][3]. Given the current environmental challenges associated with fossil fuels, fuel cell technology has been introduced as a promising, cleaner, high energy density, and more efficient power generation system [2][4][5]. Lately, polymer electrolyte membrane (PEM) fuel cells, which directly convert the chemical energy of hydrogen into electrical energy, have been predominantly developed as the most common commercial fuel cell [6][7].Hydrogen gas (as a fuel with the highest energy density) and oxygen (usually taken from air) are being used in a PEM fuel cell over the surface of electrodes to produce water through a few electrochemical reactions that are associated with the electrical power generation [8].

The PEM is the heart of the membrane electrode assemblies (MEAs) that are used for the fabrication of the PEM fuel cell stacks [9]. The PEM has a vital role in a fuel cell assembly by performing various functions such as being a carrier path for proton transport from the anode to the cathode side, a dense separation layer to block mixing the reactants, and an electric insulation layer between the anode and cathode. Many studies in the past few years have reported the enhancement of various functions of PEMs [10][11][12][13]. One of the key objectives for the PEMs development is to reduce the cells' total fabrication cost and improve their electrochemical performance and durability [14][15]. A desirable cost-effective PEM should exhibit an acceptable thermochemical and thermomechanical stability, low permeability to fuel and oxidants, high proton conductivity, high compatibility with the electrodes in an MEA, long durability, and low electro-osmotic drag coefficient [16].

3. Improving proton conductivity of the membranes

3.1. Effects of dopants and additives

Several dopants have been used to improve the proton conductivity of PEMs, especially PBI. The proton conductivity of PBI is very low, and it requires the incorporation of dopants, additives, etc. [17]. Full or partial protonation or deprotonation of the polymers happens depending on the concentration and chemical nature of the dopant [18]. PBI is an amphoteric compound and has both proton acceptor and proton donor sites [19]. A wide variety of acids and bases, such as H2SO4 [20], H3PO4 [21], NaOH [22], KOH [23], etc., have been used as dopants. Compared to the low-temperature cells, HT-PEMs require high-boiling dopants which can operate at elevated operational temperatures. Dopant concentration is a key parameter in improving proton conductivity, however, up to a certain amount. Excessive doping may deteriorate the conductivity. For example, acid doping with a high concentration (>11 mol.L-1) decreases the proton conductivity [18].

Asensio et al. [24] reported that molecular weight (MW) has a vital role in improving mechanical strength. In order to prepare a highly conductive membrane, the polymer matrix with a comparably higher molecular weight should be applied. However, such an approach may not have a significant impact on the resulting proton conductivity of PEMs.

An effective approach to improve the proton conductivity of PEMs is to incorporate some additional components. Composite membranes showed promising potential to be used as HT-PEMFCs. Composite materials consist of two or more constituents with different chemical, mechanical, or physical properties [25]. Composite membranes have widely been used in PEMFCs such as PTFE/Nafion [25], metal-oxide-recast/Nafion [26], copper phthalocyanine tetrasulfonic acid tetrasodium salt (CuTSPc)/Nafion [27], calcium titanate/PBI [28], PBI/graphene oxide [29], etc. The change in H2 crossover and proton conductivity at different operating conditions with/without filler in Nafion is illustrated in Figure 1. As shown in Figure 1(a), the channels within the membrane are fully saturated with water and the mechanisms for proton conduction can be either “Grotthus” or diffusion. In this case, open circuit voltage (OCV) can be reduced due to the molecular H2 passing through the membrane (H2 crossover). At higher temperatures (Figure 1(b)), water begins evaporation and results in the shrinkage of the channels and decreasing proton conductivity. On the other hand, H2 crossover improves at elevated temperatures. Adding filler to the composite (Figure 1(c)) can decrease H2 crossover and increase H2 path to migrate from anode to cathode .[25] 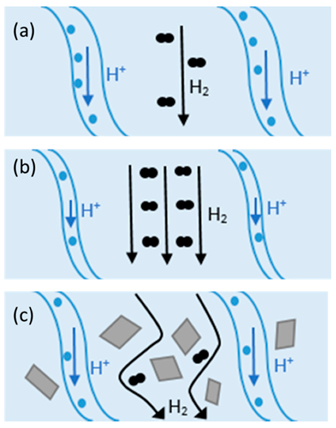 Mixed-matrix membranes (MMMs) are a class of membranes comprised of a solid phase uniformly distributed in a polymer matrix. MMMs benefit from the advantages of the polymer membrane (high flexibility and ion exchange capacity) and inorganic constituents (high thermal and mechanical properties, water uptake, and proton conductivity) [30]. Among the inorganic materials, metal-organic frameworks such as Fe, Cr, Al, and Zr have high specific surface areas and offer higher proton conductivity. These MOFs can improve proton conductivity by defect engineering, post-synthetic modification, and impregnation with acidic molecules [31].

Figure 2 The Schematic design of the Vehicular Mechanism and hopping mechanism as proton conduction in PEMs [37][38].

The polarization curve named the I – V curve can be measured by less expensive electrochemical devices and methods. The method can be done using a potentiostat-galvanostat analyser over a range of temperatures and hydrogen/oxygen flow rates [45]. The impedance spectroscopy and cyclic voltammetry are known as more expensive methods compared with the polarization curve [46][47]. In this method, the electrical current is changed, and the equivalent voltage output is measured and plotted against the current density. The voltage output is an important parameter as well that shows the figure of merit for a fuel cell [48].

Ex-situ characterization techniques can be used in complementarity with in-situ electrochemical techniques. These techniques significantly affect PEM fuel cells' progress, particularly to understand the morphology of their component and stability [49][50]. The Raman spectroscopy, infrared (IR), and nuclear magnetic resonance (NMR) spectra have been used to explore the PEMs and their protonation by different acids [29][39].

In-plane conductivity measurement is a technique in which two platinum plate electrodes and a sheet of the sample (membrane) are mounted on a Teflon cell, and two parallel Pt electrodes are placed on one side of the membrane. To measure the proton conductivity in liquid water or at relative humidity lower than 100%, the cell is placed in a distilled deionized water or a humid chamber with controlled humidity (thermos-controlled humid chamber), respectively [51]. 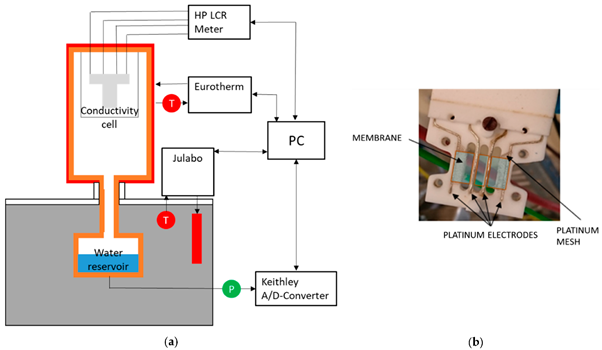 Another technique for measuring the proton conduction is through-plane conductivity. The test set-up is comprised of two PTFE blocks that build the framework and the membrane sheet is placed between two Pt electrodes. To determine the resistance, the high-frequency intercept of the impedance with the real axis should be used [52][51]. 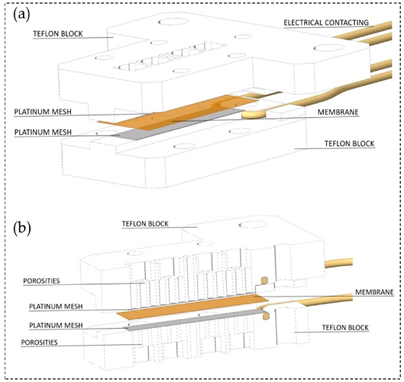 A summary of the different possible configurations (geometry and analysis techniques) for the EIS measurements is shown in Figure 5. 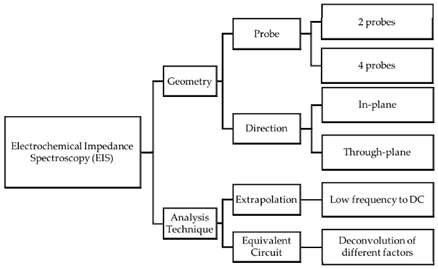 The proton conductivity of PA-doped PBI membranes has been studied by several researchers. The researchers measured the anhydrous proton conductivity of different PA-doped PBI-based PEMs and proposed that the conductivity mechanism is dominated by the proton transfer from an -N site to a neighbouring vacant one by the phosphate counter-ion through a Grotthus mechanism. They confirmed counter-ion mobility by 1H and 31P NMR analysis [56]. The bound- and unbound-PA molecules and H2PO4− anion in PA-doped PBI-based membranes mainly participate in the proton conduction through the ‘Grotthus’ mechanism [57]. Generally, the PA doping level (PAdop) has been achieved by dipping the membranes into PA (85 wt.%) for five days [57]. In this method, the membranes were dried in a vacuum oven at 60 °C for 24 h, and the doping level was determined by measuring the absorbed acid weight by the membranes [58].

The Fenton test has been widely used to study the chemical degradation of PBI-based PEMs [118]. The chemical stability of PEMs is of much concern to the lifetime of PEM fuel cells. In the Fenton test, ferrous ions (Fe2+/Fe3+) were used as the catalyst for H2O2 decomposition. The chemical stability of the PBI membrane (weight loss) was measured in H2O2 solutions having a trace amount of ferrous ions (Fe2+/Fe3+) [39]. The •OH or •OOH radicals form in situ from the decomposition of H2O2 and attack the polymer chain that has hydrogen bonding. The PEMs based on perfluorinated sulphonic acid such as Nafion display high chemical stability than those based on polyaromatic hydrocarbons [40].