Amyloidosis is a term referring to a group of various protein-misfolding diseases wherein normally soluble proteins form aggregates as insoluble amyloid fibrils. How, or whether, amyloid fibrils contribute to tissue damage in amyloidosis has been the topic of debate. In vitro studies have demonstrated the appearance of small globular oligomeric species during the incubation of amyloid beta peptide (Aβ).

Amyloidosis is a term referring to a group of toxic gain-of-function protein-misfolding diseases wherein normally soluble proteins aggregate in extracellular spaces as insoluble amyloid fibrils with a beta (β)-sheet structure [1][2]. More than 30 causative amyloidogenic proteins have been reported, and some of them, such as the amyloid β precursor protein (APP) in Alzheimer’s disease, prion protein in prion diseases, immunoglobulin light chain in AL amyloidosis, transthyretin (TTR) in ATTR amyloidosis, and serum amyloid A in AA amyloidosis, cause fatal outcomes [1][3][4][5][6][7][8]. The deposition of amyloid is localized to the central nervous system in Alzheimer’s disease and most prion diseases [1][3][4], whereas systemic deposition occurs in AL, ATTR, and AA amyloidoses [5][7][8][9][10]. How, or whether, amyloid fibrils contribute to these diseases is a topic of debate. The extracellular deposits, composed of amyloid fibrils (i.e., amyloid deposits), were initially regarded as the cause of organ dysfunction resulting from amyloidosis [11][12]. For example, the restriction of ventricular wall mobility due to massive amyloid deposition in the spaces between cardiomyocytes results in heart failure [9][13]. The direct damage of neighboring tissues by amyloid fibrils has also been suggested [11][12][14][15][16][17][18]. In contrast, more recent studies have focused on non-fibrillar precursors of amyloidogenic proteins as the cause of tissue degeneration [19][20][21]. In particular, protein oligomers generated during the process of amyloid fibril formation or released from amyloid fibril aggregates are now considered as causes of cellular dysfunction and degeneration [22][23][24][25]. In support of this view, the severity of cognitive decline in patients with Alzheimer’s disease does not correlate with amyloid plaque formation, suggesting that pre-amyloid aggregates are the cause of disease [26][27]. From this standpoint, clarifying the significance of amyloidogenic protein oligomers is important to understanding the pathophysiology and establishing therapeutic strategies for amyloidosis.

The misfolding of proteins is an important step in the process of amyloid fibril formation [28]. In ATTR amyloidosis, TTR, which is mainly synthesized in the liver, forms amyloid fibrils due to the dissociation of natively folded tetramers into misfolded monomers [29][30]. In addition, proteolytic cleavage also promotes the misfolding and aggregation of TTR [31][32]. In Alzheimer’s disease, the proteolytic cleavage of APP by secretases results in the production of toxic amyloid β peptide (Aβ), which is prone to aggregation [33]. Furthermore, increased production, decreased clearance, oxidative modification, and phosphorylation of causative proteins are factors that may trigger the process of aggregation [2]. These factors are considered to play an important role in the initiation of protein aggregation in most acquired amyloidoses.

The formation of amyloid fibrils is a dynamic process, with monomers and oligomers being rapidly exchanged for each other depending on various factors that include pH, temperature, and co-solvents [34]. According to studies of serial biopsy specimens obtained from AL, ATTR, and AA amyloidosis patients, even mature amyloid fibril masses disappear when successful disease-modifying therapies are provided [35][36][37]. Electron microscope studies have demonstrated the appearance of dotty or globular structures 4 to 5 nm in diameter and the subsequent formation of short protofibrils 30 to 100 nm in length during an incubation of Aβ in vitro [38].

The pathological studies of ATTR amyloidosis have also suggested a similar process of amyloid fibril formation via intermediates [7][17]. Observations of nerve biopsy specimens obtained from patients with hereditary ATTR (ATTRv; v for variant) amyloidosis using electron microscopy suggest that globular structures of similar diameter to Aβ intermediates were generated from amorphous electron-dense materials [7][17]. According to these studies, the deposition of amorphous electron-dense materials was observed in extracellular spaces of the endoneurium, particularly around the microvessels and subperineurial space [17]. These amorphous materials contain non-fibrillar TTR intermediates because they are stained with anti-TTR antibodies but not with Congo red [9]. Clusters of globular structures were also often observed among these extracellular amorphous materials ( Figure 1 ) [17]. The deposition of TTR-positive but Congo red-negative non-fibrillar deposits was observed even in asymptomatic carriers with no amyloid deposits [39]. Similar non-fibrillar TTR deposits have also been reported in transgenic mouse and rat models of ATTRv amyloidosis [40][41]. As the disruption of the blood–nerve barrier of endoneurial microvessels was reported, the TTR in the endoneurium was believed to be derived from the bloodstream [16]. In vitro studies of TTR aggregation suggested that such globular structures are oligomeric intermediates that have cytotoxic effects [42].

3. Formation of Amyloid Fibrils from Intermediates 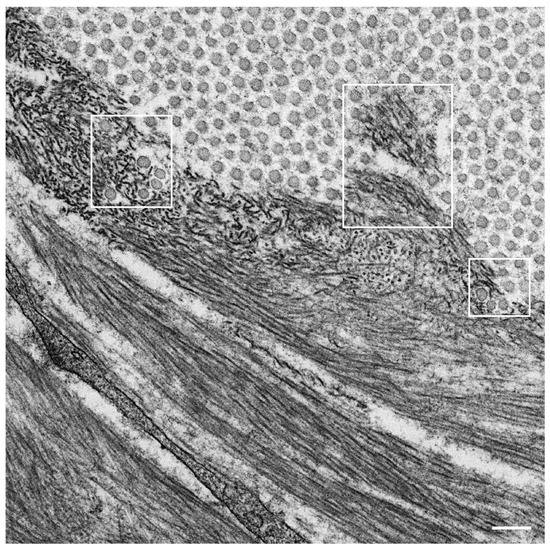 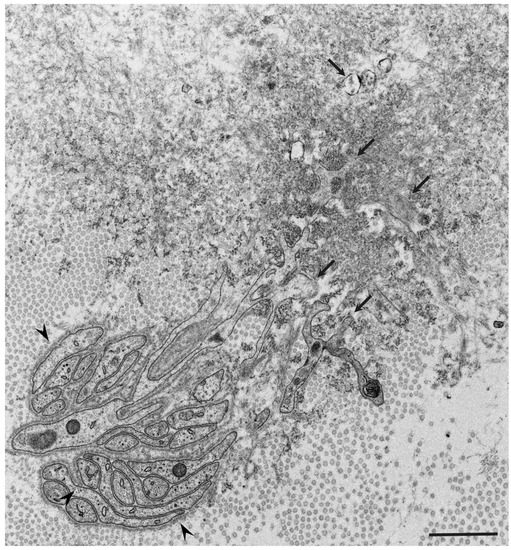 Figure 3. Atrophy and degeneration of Schwann cells apposed by amyloid fibrils. A cross section of a sural nerve biopsy specimen from a patient with hereditary transthyretin (ATTRv) amyloidosis. Schwann cells, particularly small ones associated with small-diameter nerve fibers, become atrophic when they are adjacent to amyloid fibril aggregates. Atrophy of Schwan cells is conspicuous in the upper right, where a mass of amyloid fibrils aggregation is present. The basement and cytoplasmic membranes apposed to amyloid fibrils become indistinct (arrows), while those in the lower left part, where amyloid fibrils are not present, are preserved (arrowheads). Uranyl acetate and lead citrate stain. Scale bar = 2 μm.

Similar atrophy of Schwann cells apposed by amyloid fibrils has also been reported in nerve biopsy specimens from patients with AL amyloidosis, which is another major type of systemic amyloidosis [10][14][15][18][44]. The atrophy and degeneration of vascular endothelial cells, pericytes, and neurites have also been found in brain biopsy specimens from patients with Alzheimer’s disease [45]. These findings support the concept that direct tissue damage induced by amyloid fibrils plays an important role in amyloidosis. In fact, the amount of amyloid deposits seems to be correlated with the extent of neurodegeneration in certain types of ATTRv amyloidosis, particularly the early-onset form of ATTRv amyloidosis [9][46]. However, severe nerve fiber loss was observed in the late-onset form of ATTRv amyloidosis despite a small amount of amyloid deposits, suggesting the presence of other factors for tissue damage [9]. From this standpoint, researchers are now paying attention to the toxicity of non-fibrillar oligomers in tissue damage associated with amyloidosis.