3D printing is a new emerging technology in the pharmaceutical manufacturing landscape. Its potential advantages for personalized medicine have been widely explored and commented on in the literature over recent years. More recently, the selective laser sintering (SLS) technique has been investigated for oral drug-delivery applications.

Selective laser sintering (SLS) is classified under the Powder Bed Fusion category according to the ASTM (American Society for Testing Material) [5]. It involves the building of objects by necking powder particles using the energy provided by a laser [6]. This additive manufacturing technique presents many benefits such as high resolution, the possibility of recycling the powder and the absence of pre-processing [7]. Moreover, pharmaceutical manufacturing requires a higher threshold of quality and safety. This justifies the relevance of using pharmaceutical grade powders, which are recognized to be safe for the human body, but these materials should also be printable and remain stable during the printing process. The literature on SLS provides knowledge of the requirements for printability and stability of the feedstock materials [8][9][10]. However, switching from conventional powders to pharmaceutical powders can be challenging [11][12][13].

Figure 1 illustrates the sintering process. First, powder is fed in the reservoir platform then distributed by a sled all over the building area to create a flat homogenous layer. Prior sintering, the printer needs to be heated to warm the powder. Printing per se starts by the activation of the blue diode laser which scans the powder bed in a specific pattern along the X and Y axes according to the pre-established design of the object. Powder particles are fused partially or completely together depending on the amount of transmitted energy. Next, the printing bed is lowered, and another layer of powder is deposited over the previously sintered layer allowing the building of the object along the Z axis. These steps are repeated until finalization of the object. At the end, the printed dosage forms are removed from the build platform then brushed off from their excess of powder. The powder that has not been consolidated remains in place and serves as support to the object during its building, which is very advantageous compared to other 3D printing techniques where supplementary support structures need to be built [10]. 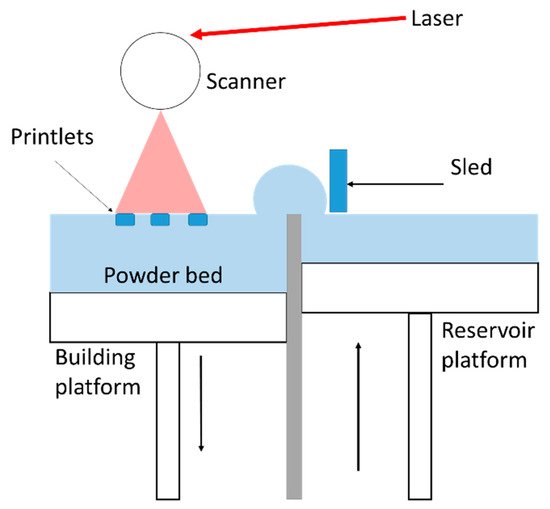 Figure 1. Schema of the SLS printer.
In SLS, the degree of sintering of an object is governed by multiple parameters, but mainly directed by the energy density (ED), which is the amount of energy transmitted per volume unit [14]. This critical parameter depends on four process parameters as shown by the empirical equation [15]:

SLS feedstock is based on powder, which is common to conventional pharmaceutical production methods such as tableting and granulation. The pre-printing step, often necessary for other 3D printing techniques such as FDM, is not required in SLS. In this process, the different components of the formulation are previously mixed and then the mixture is loaded directly into the printer. Thus, while FDM requires the formulation of filaments with excipients and active ingredients usually through the use of a thermal process known as hot-melt extrusion (HME) [16], SLS is a single step process.

Like FDM, SLS requires the use of thermoplastic polymers as matrices to carry drugs. This type of polymers present the ability to be processed and remolded upon thermal variations (heating and cooling) [17]. Before sintering, the heating temperature is set below the melting temperature for semi-crystalline polymers or below the glass transition temperature for amorphous polymers [10]. Then, the laser, depending on its scanning speed, will act as a final push to more or less fuse the powder particles. Several pharmaceutical thermoplastic polymers widely used for HME and FDM have also been explored for SLS such as copovidone (Kollidon VA64) [18][19][20][21][22][23], PEG-PVA (Kollicoat IR) [24][25][26][27], hydroxypropyl methylcellulose (HPMC) [18][28][29], ethylcellulose [30][25][29], acrylic polymers (Eudragit) [24][30][28][29] and polyethylene oxide (PEO) [30][31]. 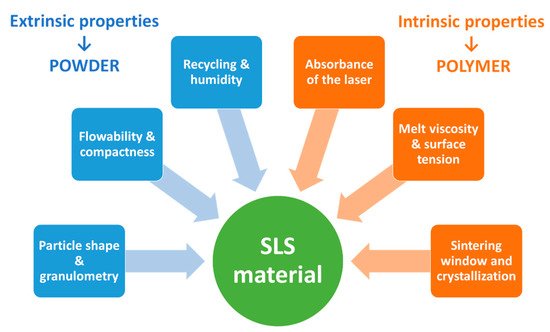 Figure 2. Main critical properties for the printability of polymeric powders in SLS.

Active ingredients were used mainly as tracers to assess the effect of SLS technology on the drug properties: thermal degradation, physical state and release. Although APIs are usually in an inferior proportion compared to the polymeric matrix, recently Yang et al. successfully sintered 2D structures containing only API without the use of a polymeric carrier [29]. Furthermore, printlets containing high-dose drug formulations [24][26][29] have shown that SLS is more tolerant of low polymer loading than FDM, where filaments prepared with 30% or less of polymer failed to be printable because they were too brittle [34].

2.2.3. Fillers and Other Components

Besides thermoplastic polymers, actives ingredients and absorbance enhancers; more complex formulations integrating other components have been also explored. For example, lactose as a filler [19], mannitol as a taste masker [20], microcrystalline cellulose (MCC) as a filler-binder [35] and cyclodextrin complexes as a dissolution enhancer [20]. It is important to note that all the excipients mentioned above, did not interfere with the sintering process. Additionally, flow enhancers such as talc [26] and silicon dioxide [23] have been incorporated to overcome spreadability issues especially with drugs that may decrease powder flowability at high loading.

3. Variability of the Structure

3.1. Variability of the Macrostructure with the Design

The ability to fabricate printlets presenting various geometries is not specific to the SLS technique but to 3D printing in general. However, precision varies from a printer to another and SLS shows good potential to produce highly complex structures with high resolution. The design of the reported SOFs varies from one study to another (Figure 3), depending on the intended application. 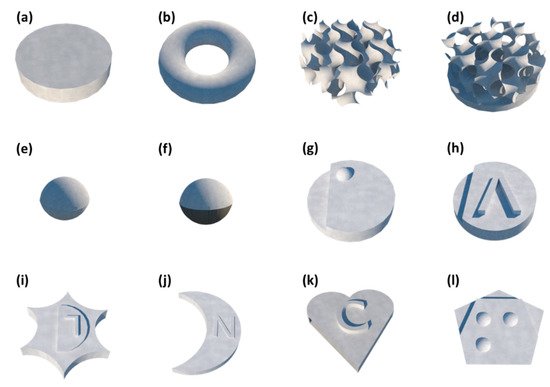 3.2. Variability of the Microstructure with the Process Parameters and the Material Attributes

3.2.1. Porosity of Printlets Produced by SLS

3.2.2. Critical Process Parameters and Material Attributes for Porosity in SLS

Studies on drug delivery devices (DDDs) have largely explored the process parameters as well as the material properties influencing the porosity of the sintered parts. For instance, Leong et al. [37] attempted to produce DDDs with controlled-release profiles by modifying either the laser power or the scanning speed. The study demonstrated that high laser power or low scanning speed resulted in very narrow internal channels that ensured a more prolonged release of the drug. A linear relationship was found between porosity (assessed by mercury porosimetry) and laser power; however, this relationship was not consistent with scanning speed. Other studies have confirmed the effect of laser energy density on controlling the pore structure [38][39]. The bed temperature was also found to be determinant for the control of the porosity level and an inverse linear relationship was demonstrated between these two parameters [40].
Regarding critical material properties, it has been demonstrated that polymers with a high melt flow index (MFI) result in denser sintered structures. A study conducted on manufacturing blends of PMMA and PS by SLS; showed that by increasing the concentration of the component with the higher MFI (PS), porosity tended to decrease [41]. Moreover, the use of fine particles (106–150 µm) increased the superficial contact area, resulting in a higher degree of sintering and therefore less porosity [42][43][44].

In general, hardness tended to decrease when the laser scanning speed was accelerated [18], or when the heating temperature was reduced [19]. Hence, the mechanical strength is directly related to the porosity, as porous printlets present weak interparticular bonding and break easily. This is consistent with previous results on the influence of high laser energy density on improving stiffness of the sintered DDDs [45][38][46][47][48][49][39]. It is, therefore, necessary to determine the optimal energy interval that balances between the mechanical integrity and stability of the drug [50].

Dissolution profiles have shown that printlets released the API faster when open porosity values were higher, regardless of whether the drug release mechanism involved is erosion and/or diffusion [18][30]. In fact, open pores increase the accessible surface area allowing the medium to penetrate faster and deeper, which generally increases the rate of drug dissolution. Since increased filler loading [19][20][22] and accelerated laser scanning speed [18] are factors favoring the porosity, they consequently result in faster drug release. When printlets were prepared with an erodible polymer at high laser scanning speeds, they disintegrated rapidly into many fragments increasing the surface area and promoting fast dissolution of the API.

Difference scanning calorimetry (DSC) and X-Ray powder diffraction (XRPD) were used to determine the effect of sintering on the solid state of the material components by comparing the sintered printlets with their corresponding physical mixtures. DSC analysis showed that most of the printlets obtained by SLS presented a reduction or even a disappearance of the characteristic API melting peak. XRPD analysis generally corroborated the precedent results by demonstrating a more or less pronounced flattening of the specific crystalline peaks of the API. This suggests that the drug dissolves partially or totally into an amorphous form within the molten polymer during the sintering process [24][18][30][28][25][19][31][20][21][22]. These results highlight the potential of SLS for the fabrication of solid amorphous dispersions.

The full amorphization of a poorly water-soluble drug, Ritonavir, with Kollidon VA64 using SLS was the first time described by Davis et al. [23]. The amorphization was confirmed by DSC, XPRD, Fourier transform infrared spectroscopy (FTIR) and using more sensitive techniques such as wide-angle X-ray scattering (WAXS) and solid-state NMR (ss-NMR). The FTIR analysis showed the appearance of hybrid peaks instead of overlapping peaks and the disappearance of NH and OH peaks, indicating weak molecular interactions and hence confirming the formation of the ASD. Solid-state NMR demonstrated broad peaks symbolic of amorphous forms and a small difference between the relaxation times of Ritonavir and Kollidon VA64, indicating a high degree of miscibility. Moreover, the printlets were comparable to the same formulations prepared by HME and even exhibited a higher degree of miscibility even though sintering is a zero-shear rate process. Finally, the ASD prepared by SLS showed a 21-fold concentration increase when compared to the physical mixtures, which confirmed the solubility enhancement of Ritonavir [23].

5. Applications of SLS in Personalized Medicine

3D printing is expected to transform personalized medicine due to its flexibility in producing printlets of different geometries and compositions. Currently, FDM is the most established additive manufacturing technique in pharmaceutical research, offering various ways to tailor the dosage and release of drugs to the individual needs of the patient. This is confirmed by the number of publications released in the last few years using this technology [51][52][53]. SLS is also holding the promise of personalized medicine through its findings about how process parameters and formulation properties affect porosity and drug dissolution [18].
Figure 4 summarizes the different applications of SOFs printed by SLS in personalized medicine. 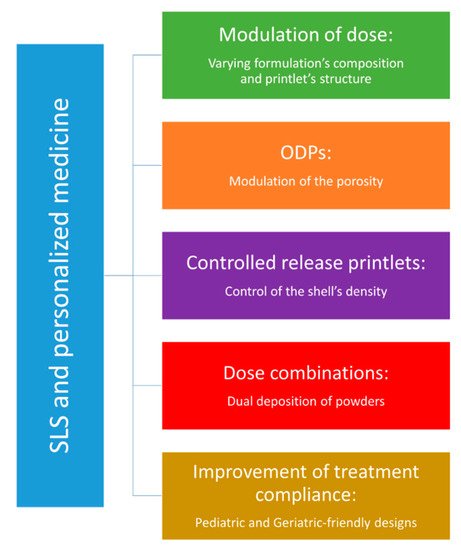 Figure 4. Applications of SOFs printed by SLS in personalized medicine.

Porosity stands out as the main contribution of SLS technology, as both sintering parameters and material properties show the ability to modulate the internal structure of printlets. Therefore, orally disintegrating printlets appear as the most promising application for SLS of solid oral forms. Moreover, previous studies conducted on SLS of drug-delivery devices help to predict potential pharmaceutical applications such controlled-release printlets. In the long term, SLS could be an interesting asset for precision medicine, but in the meantime, there are still some technical and regulatory aspects to be addressed.