Solar water heating system (SWHS) is known as a common application of solar energy where the received radiation is changed into heat and then transferred into a circulated medium, mostly water and air. By this means, electric water heaters are substituted by SWHS to support space heating and domestic hot water (DHW).

Solar water heating system (SWHS) is known as a common application of solar energy where the received radiation is changed into heat and then transferred into a circulated medium, mostly water and air [1]. By this means, electric water heaters are substituted by SWHS to support space heating and domestic hot water (DHW) [2]. According to the aforementioned advantages and extensive developments in solar water heaters’ design within the last 15 years, the global solar water heating market has been raised drastically [3]. For instance, the Indian government has set specific goals to develop SWHS [4], China started research and development projects in the early 1980s to promote this technology [5], Australia maximized the use of SWHS in Sydney Olympic Athletes’ Village [6], and SWHS has been widely exploited in Brazil since 1990 [7]. Taiwan has also introduced some subsidies for developing SWHS: 2.27 million m2 solar collectors were installed in the residential areas for supplying DHW and space heating by the end of 2013. Through this, 98,700 tons of oil and 319,000 tons of CO2 emissions have been saved in the country [8]. There have also been some efforts in the use of SWHS in cold areas such as Canada [9], in which 35% of total space heating and hot water demands are supplied by this technology. In a southern European country with an acceptable solar intensity, SWHS can save around 70% energy [10].

Although the initial cost of SWHS is greater than conventional heaters in most countries, there are some advantages of using this system. For instance, there is an accepted monthly electricity saving in New Zealand using SWHS in comparison with heat pump water, especially during the wintertime (Figure 1) [11]. Thus, it was estimated that more than 130 countries were taking advantage of using SWHS in commercial, industrial, and residential sectors, with either glazed or unglazed solar thermal systems, by the end of 2018 [12].

Figure 1. Comparing the monthly saved electricity by using SWHS and heat pump for a medium level user in New Zealand [11].
The simple structure of SWHS generally incorporates basic elements such as solar collector panels, a water storage tank, and a heat transfer medium [13][14]. It also includes a few additional components such as a pump, backup heating module, piping units, and a heat exchanger. In SWHS, the working fluid is heated through the sunlight beams and then stored in a storage unit. This heated fluid is subsequently transported in the pipes to satisfy the defined application, i.e., space heating and DHW usages. Conventionally, the SWHS uses solar radiation to heat the fluid; however, the storage unit exploits an auxiliary heater in some cases to compensate for the insufficient solar radiation of winter and cloudy days through the electricity or gas [13].

According to the structure, the SWHS is divided into the direct and indirect systems. In the prior, the water is pumped directly between the storage tank and solar collectors. In the latter, a heat transfer fluid, such as a glycol or water mixture, is passed among the collector, and a heat exchanger is used to support and accelerate the heat exchange from the collectors to the stored water. In these indirect systems, the heat exchanger is located inside or outside of the water tank [13].
The SWHS is also classified into the active and passive systems as shown in Figure 2 [14]. In the active system, including open- and closed-loop systems, the collectors, storage units, and distribution equipment are employed to absorb the solar radiation, store solar energy, and transfer it to the heated space, respectively (Figure 3). On the contrary, the passive systems are based on natural convection heat transfer using the thermosiphon method and integral collector storage. Moreover, the solar collector and storage unit are integrated into a building [15]. In the passive systems, heat is conducted naturally from the collector, installed at a higher elevation, toward the storage tank while in the active system, a pump is used to circulate the heating fluid across the collector. Although the active SWHS is more efficient even in multistory buildings, the complicated structure and higher cost are known as its two main demerits [16]. 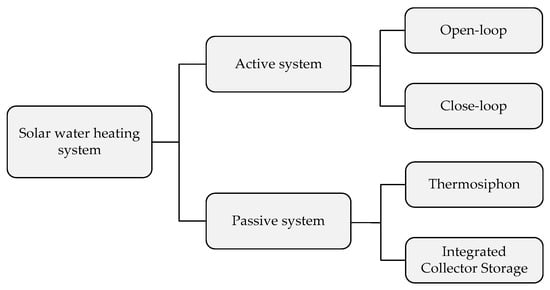