Formaldehyde (FA) is a colorless, flammable, foul-smelling chemical used in building materials and in the production of numerous household chemical goods. Herein, a fluorescent chemosensor for FA is designed and prepared using a selective organ-targeting probe containing naphthalimide as a fluorophore and hydrazine as a FA-binding site. The amine group of the hydrazine reacts with FA to form a double bond and this condensation reaction is accompanied by a shift in the absorption band of the probe from 438 nm to 443 nm upon the addition of FA. Further, the addition of FA is shown to enhance the emission band at 532 nm relative to the very weak fluorescent emission of the probe itself. Moreover, a high specificity is demonstrated towards FA over other competing analytes such as the calcium ion (Ca2+), magnesium ion (Mg2+), acetaldehyde, benzaldehyde, salicylaldehyde, glucose, glutathione, sodium sulfide (Na2S), sodium hydrosulfide (NaHS), hydrogen peroxide (H2O2), and the tert-butylhydroperoxide radical. A typical two-photon dye incorporated into the probe provides intense fluorescence upon excitation at 800 nm, thus demonstrating potential application as a two-photon fluorescent probe for FA sensing.

Formaldehyde (FA) is both the simplest aldehyde and a highly reactive carbonyl species that is well known for its applications in food, textiles, and wood processing [1][2][3]. Indeed, FA exists at low levels in most living organisms and can be found in natural foods such as fruits, vegetables, meats, seafood, and dairy products [4]. However, FA has been recognized as the third largest indoor chemical pollutant, and exposure to FA may induce severe central nervous system damage, cancer, and even death [5][6][7]. Due to its toxicity, the United States Environmental Protection Agency has established a maximum recommended daily dose of 0.2 mg/kg per day for FA [8].
Biological FA is produced at levels of 0.2–0.4 mM that are maintained endogenously via enzymatic processes [7]. Whereas cell proliferation can be promoted, and memory formation mediated, at healthy FA levels, cognitive impairments, neurodegeneration, and memory loss have been reported at elevated concentrations due to potent protein and DNA cross-linking mechanisms.
Recently, several methods such as high performance liquid chromatography (HPLC), mass spectrometry, and colorimetry have been used to detect FA [9][10][11]. However, these traditional techniques have several disadvantages, including low sensitivity, complex operative procedures, long reaction times, and damage to living cells. In recent years, fluorescent probes have been recognized as powerful analytical tools for the detection of various ions and biomolecules in living systems with their high selectivity, sensitivity, fast response time, and in-situ biological applications [12][13][14].
Optical imaging is recognized as a supportive noninvasive technique for the study of living systems. Biological studies have suggested that the generation of FA is associated with many organelles, including lysosomes, the endoplasmic reticulum, and mitochondria [15][16][17][18]. However, the majority of fluorescent probes are limited in their applications in living tissues due to their use of one-photon excitation with short wavelengths, along with other shortcomings. By contrast, two-photon microscopy has the ability to penetrate deep tissue and could provide improved three-dimensional imaging with long-wavelength excitation [15][19].

2. Naphthalimide-Based Fluorescent Molecular Probe for the Selective Sensing of Formaldehyde

2.1. Design and Synthesis of Probe EW2

The condensation of an aldehyde group with fluorescent probes containing an amine or hydrazine functional group was used to develop chemosensors for the detection of formaldehyde (FA). As shown in Scheme 1, the probe consisted of a hydrazine-containing naphthalimide fluorophore with an FA-binding site along with a phenylsulfonamide group for targeting the Golgi apparatus [15][18][20][21].

Scheme 1. The synthesis of compound 1 and probe EW2.

The absorption spectra of probe EW2 in the presence of various concentrations of FA (0–100 μM) are presented in Figure 1. Thus, in the absence of FA, the probe exhibits strong absorption bands at 260 and 442 nm in 10 mM phosphate-buffered saline (PBS, pH 7.4) containing 1 % dimethyl sulfoxide. With the addition of FA, the absorption band is seen to increase in absorbance, and a minor blue-shift to 440 nm is observed.

Figure 1. The evolution of the absorption (a) and fluorescence emission (b) spectra of probe EW2 (10 and 5 μM, respectively) with increasing concentrations of FA (0–100 μM) in 10 mM PBS buffer (pH 7.4, 1% DMSO).
The fluorescence emission measurements in Figure 1b indicate that the probe itself is almost completely non-fluorescent (ΦF = 0.039). However, when FA is introduced to probe EW2, a strong fluorescence enhancement is observed (ΦF = 0.415) at 546 nm and gradually increases with increasing concentrations of FA (0–100 µM). A good linear relationship (R2 = 0.9842) is also established between the emission intensity and the concentration of FA. The detection limit was calculated to be 0.35 µM using the 3σ method. Moreover, the kinetic response of probe EW2 to FA was also studied, and the fluorescence enhancement was recorded in the presence of 5 and 10 equiv. of FA. In each case, the emission reached a maximum value within three minutes. The rate constant of the probe in the presence of 10 equiv. FA was determined to be k = 0.55 min−1.
To examine the emission properties of probe EW2 in biological conditions, the influence of pH upon the fluorescence response was studied in the absence and presence of FA. In the absence of FA, the probe exhibited a negligible change in fluorescence intensity as the pH varied from pH 4.0 to 10.0. However, an enhancement in the fluorescence intensity with increasing pH was observed in the presence of FA, thus suggesting that FA can be detected by the probe under physiological pH conditions. These results indicate that the probe has application potential for the real-time imaging of FA in living systems.

2.3. Selectivity of EW2 towards FA

To evaluate the selectivity of probe EW2 towards FA, the fluorescence response towards a range of competing biological species was also examined, as shown in Figure 2. Here, the probe EW2 is seen to be highly selective towards FA, with a distinct fluorescence enhancement at 547 nm, over other analytes, such as Br−, Cl−, F−, I−, NO2−, NO3−, SCN−, OAc−, HSO3−, OH−, t-BuO−, OCl−, O2, H2O2, HS−, cysteine (Cys), homocysteine (Hcys), glutathione (GSH), 4-hydroxybenzaldehyde, 4-nitrobenzaldeyde, acetaldehyde, terephthaldehyde, and glyoxal. This result clearly indicates the excellent selectivity of the probe EW2 towards FA over other competing species for possible biological applications.

To further verify the reaction product derived from the probe after the addition of FA, the final solution was characterized by electrospray ionization (ESI) mass spectrometry. A new peak was observed at m/z = 395.58 upon the addition of FA. The species observed is formulated as [3 + H+]+, thus confirming the formation of the hydrazone product via the reaction with FA (Scheme 2). 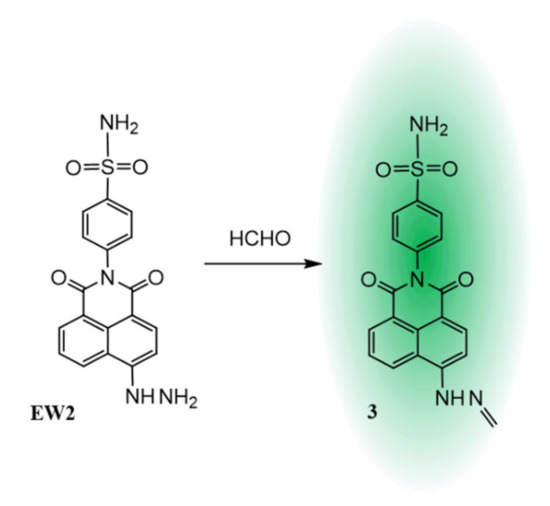 Scheme 2. The mechanism of the condensation reaction between probe EW2 and FA.

2.5. Detection of Formaldehyde in Food Samples

To evaluate the performance of the probe EW2 in the detection of FA in food, various samples (dried shiitake mushroom and onions) were prepared as explained in the Experimental Section. The food samples were then treated with EW2 (5 μM) and the corresponding emission intensities were recorded. The mushroom and onion extracts responded to the probe with intensity enhancements, thus revealing the presence of certain amounts of FA.
To determine the amount of FA in the food extracts, the test samples were spiked with various amounts of FA (5, 10, and 15 µM), and the fluorescence intensity of all these samples were obtained. The level of FA in the dried shiitake mushroom was found to be 5.2 µM, while that in onions was 4.8 µM. FA in these samples can be detected with probe EW2, and the recovery shows over 80 %. These results demonstrate that the EW2 probe can be used for the quantitative detection of FA in food.

2.6. Cell Imaging of the Probe

The probe EW2 was used to image FA in MCF7 cells. Negative control cells were treated with either FA alone or EW2 alone, with both controls affording no fluorescence (Figure 3). However, when the MCF7 cells were pre-treated with 50 μM FA for 30 min followed by 5 μM EW2 for an additional 40 min, strong fluorescence signals were observed. These results indicate that the EW2 probe can be used to detect FA in living cells. Moreover, the MCF7 cells treated with various concentrations of FA (5, 50, and 500 μM) revealed a significant dose-dependent turn-on fluorescence. These results confirm the ability of the probe EW2 to assay the FA quantitatively in living cells. 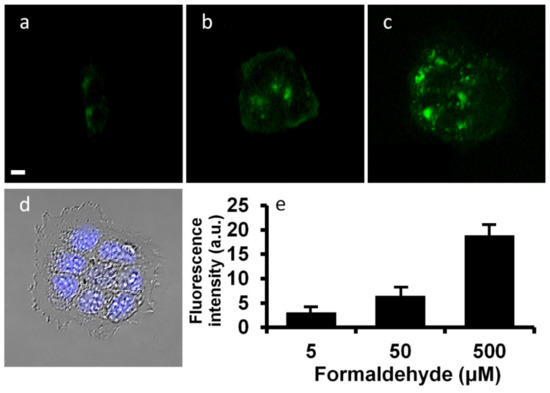 Figure 3. The fluorescence imaging of FA in live MCF7 cells using the probe EW2. The MCF7 cells were incubated with (a) 5, (b) 50, and (c) 500 μM FA for 30 min followed by 5 μM of probe EW2 for 40 min. The image in (d) is the bright-field image of the cells in (c) overlaid with an image stained with 5 μg/mL Hoechst 33342. The scale bar represents 50 μm in all images. (e) The mean fluorescence intensities of representative images with 5 μM EW2 with varying concentrations of FA.

The feasibility of using probe EW2 to image FA in living cells was investigated. The cytotoxicity of EW2 was first evaluated via the MTT assay, as shown in Figure 4. The MCF7 cells were treated with various concentrations (0–30 μM) of EW2. The results indicate that probe EW2 possesses low toxicity towards living cells and is suitable for imaging living organisms under the selected conditions. In addition, cell viability was verified using Hoechst 33342 staining. As shown in Figure 3d, a bright-field image was acquired and overlaid with a fluorescence image of the cells stained with Hoechst 33342. The result clearly reveals the presence of intact and viable nuclei after the treatment of probe EW2.

2.8. Inhibition Studies of the Probe

The inhibiting effect of NaHSO3 on FA was then investigated. In this set of experiments, the cells were treated with NaHSO3 as a negative control, and their fluorescence in the green channel was examined. This negative control afforded no fluorescence. However, when the cells were pre-treated with 500 µM FA for 20 min followed by 5 µM of probe EW2 for 40 min, an intense green fluorescence was observed. By contrast, no fluorescence was observed for the cells that were pre-treated with 500 µM FA and NaHSO3 for 20 min followed by 5 µM of EW2 for 40 min. Thus, the scavenging effect of NaHSO3 upon FA was demonstrated, confirming that the probe can be used to monitor exogenous FA in living cells.

Endogenous FA production is triggered by endoplasmic reticulum stress, which is known to cause various diseases, including neurodegeneration, atherosclerosis, type-2 diabetes, liver disease, and cancer [23]. To induce FA production, the cells were treated with thapsigargin (TG) prior to being stained with EW2 [23]. As the concentration of TG increased, the green fluorescence intensity became stronger , demonstrating that EW2 is also highly useful for imaging FA produced in cells.