Biochar can be used as a reinforcing filler improving the mechanical, thermal and even electrical properties of polymer composites. The incorporation of this cost effective sustainable filler not only improves the applicability of the resulting composite but also makes the process and end product sustainable.

Biochar is the carbon rich solid material that is left after the thermochemical conversion of biomass in an oxygen limited environment [1]. Features like low density and ecological sustainability make it an attractive replacement for inorganic fillers [2]. Biochar can be obtained from biomass by various thermal decomposition methods like pyrolysis, combustion, gasification and liquefaction [3]. Precisely, biochar is produced by a method called carbonization. Carbonization and pyrolysis share the same fundamental principle where the raw material undergoes thermal decomposition in an inert atmosphere. However, the process of carbonization is undertaken at a much slower pace and heating rate in order to enhance carbon yield of the process. Several factors, such as feedstock type, carbonization process, pyrolysis temperature, heating rate, and residence time can influence the physiochemical properties of biochar [3]. Biochar is produced using various lignocellulosic resources that can be incorporated into composites as fillers to enhance various properties of composites. Pyrolysis is the process of carbonization of raw material in an oxygen free environment to obtain carbon rich product. Behazin et al. (2018) [4] used miscanthus grass as the raw material for biochar. Waste materials generated from processing can be used as a raw material. Waste materials like pine wood, date palm, oil palm empty fruit bunch and rice husk, cashew nut shell have been used to produce biochar to be used as reinforcing filler in polymer matrices [5][6][7][8]. Utilization of processing waste materials as biochar feedstock closes the loops of production making it a circular and sustainable process [9]. S. Zhang, Yao, Zhang, & Sheng, 2018 [10] used bamboo to produce biochar, as filler in the composites. Bartoli et al. (2020) [11] used olive pruning as raw material for production of biochar used in manufacture of biochar filled epoxy composites. Idrees, Jeelani, and Rangari (2018) [12] produced biochar out of packaging waste consisting primarily of starch-based packing peanuts. Other organic materials like sewage sludge and bird litter have been reportedly implemented for manufacturing biochar [13][14]. The feedstock of biochar is fairly versatile, and the properties can be tailored by fine tuning the carbonization process.
The morphological structure and properties of biochar have made its implementation possible in diverse arenas. The excellent adsorption capabilities of biochar make it a great soil conditioning agent and is used to contribute to soil health by restoring trace elements [15]. Biochar can be used as an adsorbent in wastewater treatment systems and has been used in several water filtration systems as well. The hygroscopicity of biochar can be altered by controlling the temperature of carbonization and the resultant biochar can be used as a soil additive to improve moisture holding capacity of the soil. A major sector that is looking into the application of biochar is the plastic composite industry. Polymer composites are multiphase materials reinforced with a filler, resulting in improved mechanical properties due to the synergistic effect of the two [16]. Automobiles are a major contributor to greenhouse gas emissions. As per Environmental Protection Agency (EPA), an average 8887 g of CO2 is emitted from 1 gallon of gasoline and 10,180 g of CO2 is emitted from 1 gallon of diesel [17]. Annually 4.6 metric tons of CO2 is released from a typical passenger vehicle [17]. These emissions have a highly detrimental effect on the global climate scenario. Increased fuel efficiency of vehicles can lead to lower fossil fuel consumption, in turn lower greenhouse gas emissions. To achieve this, the automobile manufacturers have resorted to lightweighting of the vehicles. As per the EPA 2020 Automotive trends report, the heaviest vehicles produced in model year 2020 generate half the amount of CO2 compared to what was generated in model year 1978 [18]. The CO2 generated for lighter vehicles in 2020 is two thirds of what was generated in 1978, all owing to the massive design changes and advancements undertaken by the automakers [18]. Lightweighting can be achieved by making smaller cars or by material substitution without compromising on the capacity and size [19]. Traditional materials are being replaced by lightweight metals and largely by polymer composites. These composites are generally filled with fillers like talc, glass fibers, calcium carbonate (CaCO3), clay nanoparticles [20][21], etc. These polymer composites are lighter than the conventional metals, but the inorganic fillers have a high density making the end products bulky. Biocomposites come into play here. Biocomposites are a category of polymer composites that are biocompatible and/or eco-friendly [22][23][24]. The fillers in biocomposites are biomass derived from plants or animals, however, natural fillers are generally polar leading to interfacial adhesion issues with the fairly non-polar polymer matrices. Biochar is relatively inert compared to unprocessed natural fillers and can serve as filler in polymer composites fortifying the composites and with further calibration, additional properties like electrical conductivity can also be introduced in the composites, as per requirement.
As per Web of Science, in the last decade between the years 2015–2021, 70 research articles have been published based on the incorporation of biochar as a filler in polymer composites. The literature search was done using the keywords polymer, biochar filler and composites. A yearly publication statistic is presented in Figure 1. The figure shows a steady growth between the years 2015–2020 in the research done on application of biochar filler in polymer composites. A significant number of articles have been published in the past 6–7 months of 2021 as well. This is indicative of the growing interest towards application of biochar as a composite filler over the years. 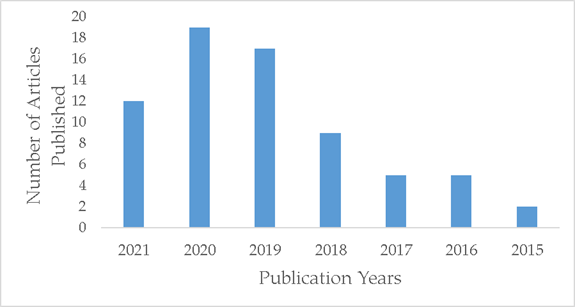 Figure 1.The number of studies based on biochar filled polymer composites published each year between 2015 and 2021. This image is developed with data derived Certain data included herein are derived from Clarivate Web of Science. © Copyright Clarivate 2021. All rights reserved.

The inherent properties of biochar are greatly dependent on the structure. Properties like electrical conductivity can be manipulated greatly by the structure of biochar. Carbon has several allotropes that are crystalline and amorphous. Graphite is a crystalline carbon allotrope with great electrical properties owing to its structure known as graphitic structure. Graphitic structure of material can be characterized by the presence of highly ordered well stacked graphene sheets [25]. Graphitizable biomass has the tendency of obtaining a very highly arranged structure at a very high (>2000 °C) treatment temperature [25]. The biochar structure is composed of ordered crystalline turbostatically arranged crystalline regions and disordered amorphous regions [26], obtained from the intrinsic structure of biomass, predominantly composed of cellulose. The presence of these turbostatically ordered regions contribute to the electrical conductivity of biochar [27]. This isotropic structure results in spaces forming a porous structure [25]. The honeycomb like pores on the surface of biochar result in mechanical interlocking of polymer with the biochar making it a very good reinforcing agent [28].
Figure 2 here shows the honeycomb structure of biochar derived from different feedstocks like corncob, cassava rhizome and cassava stem [29]. 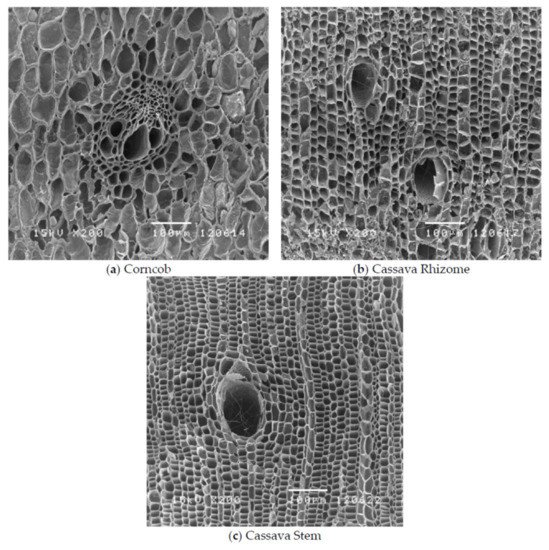 Figure 2. SEM images showing biochar produced from different lignocellulosic feedstocks (a) corncob (b) cassava rhizome (c) cassava stem. Each feedstock source has a distinctive morphology which is retained in the biochar after carbonization. This image is taken from [29] from Applied Sciences Open Access journal MDPI publications.

Polymers like polypropylene, polyethylene, nylon, epoxy, etc., are used in the form of composites filled with inorganic fillers like CaCO3, talc, glass fibers and clay nanoparticles have also been used as fillers in several composites [20][21][30]. Carbon based fillers like carbon fibers, carbon nanotubes and carbon black have been used to improve the mechanical properties, along with making the non-conductive matrix electrically conductive [30][31][32]. These conventional fillers can be substituted with biochar to develop light sustainable composites that are cost effective and improve the carbon footprint of users throughout their lifecycle. The fabrication of biochar filled composites is carried out using the commonly used composite fabrication methods like melt extrusion and injection molding. Some of the studies addressed here have used not very commonly used methods like solvent casting, resin curing, etc., [33][34]. The melt processing of polymer takes place in three steps involving melting, shaping and solidification of polymer in the desired shape [32]. Melt extrusion of polymers can be done using a single screw extruder or a twin-screw extruder. Application of heat and pressure results in dispersion of external filler, coloring agents, etc., in the polymer matrix. Melt processing of plastics depends on several polymer characteristics like melting point, melt viscosity, etc. The process can be optimized by controlling the barrel temperature of the extruder and the rotation speed of the screw. In injection molding, which is largely used on an industrial scale, the molten polymer is injected into a mold and casted into the shape of the mold. Solution casting of polymers is based on Stokes law and is achieved by dissolution of the polymer and the additives in a solvent or different solvent and then mixing them together. The mixture is then dried to evaporate the solvent and render the composite [33]. The various fabrication methods and compositions used in the studies done on biochar filled polymer composites are summarized in Table 1.
Table 1. Fabrication methods and composition of biochar filled polymer composites.
A few studies have reported very interesting and novel methods undertaken in their particular studies. Li et al. (2016) [34] induced a negative charge on their polymer using a high shear mixing technology to obtain segregated biochar network in the composites [48]. This method has been deemed successful in the study. Utilization of intrinsic properties of the polymer to customize biocomposite properties has not been reported anywhere else so far. Ferreira et al. (2019) [39] used commercially available sugarcane bagasse biochar in their study. They chemically treated their filler with a base (NaOH) and acid (HCL) in a leaching process followed by Isopropanol vapor thermal annealing to remove polar groups from the biochar surface for better interfacial adhesion in composites. The method developed by them is quite unique and has been successful in improving interfacial properties of the composites. It can be observed that injection molding and melt compounding methods have been largely used for composite fabrication. These methods have been largely used since melt extrusion and injection molding are practical and more efficient on a commercial scale. They are equipped to process a large amount of material with ease making the overall process efficient. Solvent casting and resin curing methods work on a smaller scale, however, they are not preferred commercially as scaling up of these methods to a commercial level will not be as efficient as injection molding and/or melt compounding. Another factor to look into in the fabrication process is addition of external additives as compatibilizers. Maleic anhydride grafted polypropylene (MAPP) is the most commonly used additive reported in most of the studies using a polypropylene matrix. Figure 3 presents an overall overview of the steps involved in fabrication of polymer-biochar biocomposites. 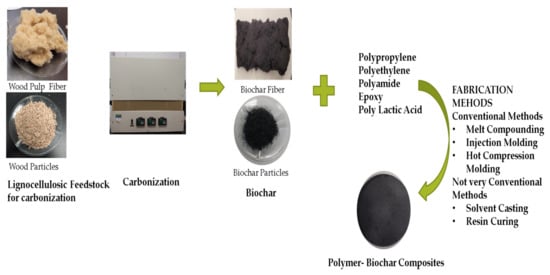