Many pollutants are entering water bodies due to the continuous increase in the number of global inhabitants, manufacturing units, unplanned urbanization, cultivation ventures, and the use of chemicals [1]. In today’s scenario, researchers are working on the effective removal of various pollutants such as heavy metals, synthetic colors, sediments, chemicals, radioactive, pharmaceuticals, and other waste material from the natural cycles [2]. Among all the contaminants, heavy metals are the most prevalent contaminant found in water. Heavy metals are described as elements with a particular density greater than 5 g/cm 3 [3]. This classification covers critical elements for trace concentrations (for example iron, vanadium, cobalt and copper, manganese, zinc, strontium, and molybdenum). If the threshold amount is surpassed, however, multiple damages in living systems may be found [4]. Heavy metals are found in the atmosphere from both natural (e.g., soil erosion, weathering of the earth’s crust, volcanic eruptions) and anthropogenic sources (e.g., mining and mineral beneficiation, industrial effluents from cement, food, fiber, paper, electronic operations, chemical formulations for plague control, and so on) sources [5]. Since heavy metals do not decay in the atmosphere, their accumulation in environmental compartments (such as air, soil, and waters) could contribute to their migration into food and water intended for human consumption in the long run [6]. This is a significant environmental issue, prompting scientists to focus on new technologies that will enable heavy metals to be removed from polluted environmental supplies. Heavy metals act as a poison to metabolic activities and enzyme inhibitors [7]. These toxic metals are not degraded biologically and tend to accumulate in living beings, resulting in different illnesses and disorders. Heavy metals leak into nature by various modes like combustion of coal, sewage waste-water, and emission of toxic gases by automobiles, battery manufacturing industries, activities related to extraction of minerals, leather industries, alloy industries, and the consumption of non-renewable energy resources [8]. Various methods like filtration, precipitation through chemical methods, neutralization, ion exchange, and adsorption are used to bind heavy metal ions from the wastewater discharged from many industries [9][10][11][12]. To date, a large number of published papers on wastewater treatment have increased progressively since 2000 ( Figure 1 ).

The removal of heavy metal ions has always been a challenge for scientists as effective adsorbents are required for their elimination. Adsorbents have many benefits over traditional chemical sorbents in water treatment systems: biodegradability in natural/environmental settings, high abundance in nature, high surface-area, a greater tendency to adsorb such metal ions, appropriate pore dimension and volume, more mechanical strength, compatibility, they are easily available, they are easily renewable, they have a cheap cost, their eco-friendliness, they have easy manufacturing methods, and they are more specific in nature [13]. These structures have a high surface area to volume ratio and multiple active binding sites on their surface, enabling heavy metals to be maintained effectively under some conditions (e.g., –COOH, –NH 2, –OH, –SH groups) [14]. Adsorption is generally dependent on the association of hydroxyl, amino, and carboxylic groups on the adsorbent’s surface with metal ions such as Cu 2 +, Pb 2+, and Cr 3+ cations [15][16].

In the past two decades, the adsorption of heavy metals with environment-friendly and economical materials like agricultural, industrial, or urban residues has come up with a promising technology in the removal of pollutants from aqueous discharge [17]. Hence, a lot of research has been reported by many authors using economical adsorbents such as lignin, bark, chitosan, clay, zeolite, activated carbons, synthetic polymeric adsorbents, and so on [18]. The present review focuses on the use of various types of adsorbents for the removal of heavy metal ions. There are not many research papers that use multiple types of adsorbents in a single frame to eliminate them. The classification of various types of adsorbents like natural, synthetic, and modified adsorbents have been covered in this review which otherwise was not included in any of the reviews published before [19][20][21][22][23].

Adsorption is a commonly proposed technique since it is highly effective in the extraction process and is easy to apply; adsorbents are available in different ranges and are cheaper in cost [24]. Several chelating resins were synthesized by the polymerization of traditional chelating monomers i.e., methacrylic acid, acrylamide, vinyl pyridine, and vinyl imidazole [25][26]. Researchers synthesized a polymer by reacting this with ligands having a low molecular weight which resulted in a new polymer with some functionality or new group in the modified polymer [27][28]. Additionally, the functionalization of the polymer matrix results in the formation of new chelating resin [29]. Because of the existence of reactive hydroxyl and amino moieties, chitosan is a natural biopolymer that is abundant in nature and has the ability to adsorb a considerable amount of metals. Furthermore, modification of chitosan through physical and chemical techniques were able to increase its sorption abilities for metal ions like As 3+ or As 5+ [30][31][32], Cr 6+ [33][34][35], Pb 2+ [36][37], Cu 2+ [38][39][40], Hg 2+ [41][42][43], Cd 2+ [44][45][46], Ni 2+ [47][48][49], Zn 2+ [50][51], Ag + [52][53], Co 2+ [54], Mn 2+ [55], U 6+ [56][57], V (3+,4+ and 5+) [58], and Pt 4+ [59]. Similarly, Jiang et al., synthesized polystyrene-supported chitosan beads cross-linked with glutaraldehyde for rapid extraction of copper ions [38]. Yan et al. (2010) studied whether the coagulation procedure was useful in the removal of arsenic (As), and found that Al and Fe salts were effective coagulants for extraction. Furthermore, since 2000, the amount of data available on adsorption in water treatment has steadily risen ( Figure 1 ), suggesting a rise in research interest in this area [60].

The adsorption process is the most efficient and admirable process for the treatment of toxic metals present in wastewater. In this process, toxic material is shifted by physical or chemical means onto the available surface of the adsorbent ( Figure 2 ) [61]. The adsorption process is a cheap method and has a very low operating cost, and causes less contamination during the extraction process of toxic metal in comparison to conventional methods. In the adsorption methods, sorbents can be regenerated as well as reused several times for effective removal, and hence are considered to be an environmentally friendly method [62]. The major characteristics required for the choice of adsorbents are price effectiveness, large surface area, pore size distribution, presence of functional moiety, and polar characteristics of the sorbent which determines the efficiency of adsorption methods [63]. It is, therefore essential to understand the adsorption process. Adsorption is a mass transport method of solute present in the solution and accumulated onto the surface of the adsorbent which is generally a solid substance [64]. There are two kinds of force i.e., physical and chemical interactions that exist between adsorbent and adsorbate. Physical forces are weak and adsorbed molecules can be attached to adsorbents anywhere, meaning physical forces are non-specific in nature. Chemical adsorption is specific in nature and adsorbate binds to adsorbents through the covalent or electrostatic bonds. In the case of physical adsorption, forces are Van der Waals, dispersion interactions, and hydrogen bonding.

Adsorption kinetics data are expected to create an efficient and reliable design model for the removal of pollutants from aqueous media. Kinetic models explain the sorption process and method used. It also explains the speed with which adsorption sites of adsorbent are occupied and the number of unoccupied sites. The adsorption kinetic is commonly used to predict the various adsorbent’s sorption ability. Kinetic modeling actually gives information about adsorption mechanisms and possible rate-controlling steps such as mass transport or chemical reaction processes. Kinetic models help us to find out the metal extraction rate which finds the time to attain the equilibrium. The rate of the removal of solute depends upon the physical or chemical properties of the sorbent and also on the various parameters that affect the rate of adsorption. Usually, the rate of sorption of toxic ions becomes better with time until the equilibrium was achieved between the amounts of adsorbates in the solid phase and the amounts of adsorbates present in the liquid. Mostly, the rate of adsorption is fast at the start and steadily slows down as equilibrium is reached. The time to obtain equilibrium varies with the adsorbates, adsorbent, initial concentration, and the various parameters that affect the solution. There are different kinds of models used by researchers to study the sorption process such as Lagergren’s pseudo-first-order (PFO), pseudo-second-order, Elovich kinetic equation, and parabolic diffusion model. Among the entire models, the rate of sorption was generally studied through the Lagergren pseudo-first-order model. At present, the pseudo-second-order (PSO) model has been generally used for the sorption process because of its excellent illustration of the practical facts for all sorbent sorbate systems. For this, PFO and PSO kinetic models will be utilized to describe the adsorption kinetics of heavy metal ions onto adsorbent, which was defined as follows.

The pseudo-first-order kinetic model has been mostly used to speculate the rate of sorption of metal which is described as: dq/dt = k 1 (q e − q) (1)

The above equation is a straight-line having intercept log K f and slope equal to 1/n.

For metal ion sorption, the temperature is important as far as thermodynamic adsorption is concerned. Usually, endothermal and exothermic sorption processes are the two general types that exist. These are determined by the increase or decrease of the temperature throughout the adsorption process. Thermodynamic functions such as entropy, enthalpy, and free changes in energy can be determined using the Van’t Hoff equation during the adsorption process as given below: d(lnKeq)/dT = ΔH/RT 2 (9) where Keq = qe/C. Keq is the equilibrium constant. The change in free energy could be evaluated with the help of Equation (10): ΔG 0 = ΔH 0 − TΔS 0 (10)

The change in enthalpy and entropy of the adsorption process could be evaluated from the slope and intercept of a line obtained by plotting ln Keq vs. 1/T.

Gibb’s free energy, enthalpy, and entropy changes are important design factors for assessing the performance and predicting the mechanism of an adsorption separation process, as well as one of the fundamental needs for characterization and optimization Table 1 show typical values for thermodynamic parameters for adsorption of heavy metal ions on adsorbents [65]. 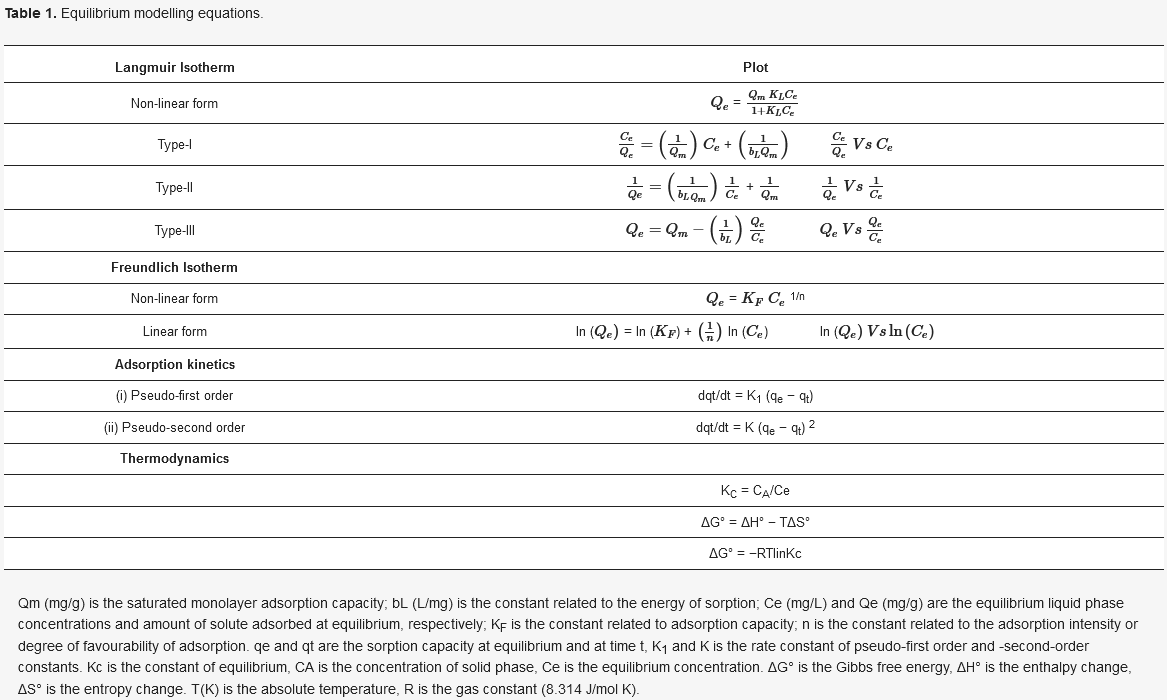