Tourism is vital to the success of many economies worldwide and has been a widely researched area for many years. Unfortunately, an insufficient number of studies have been conducted on this subject in the context of Saudi Arabia. Therefore, this research investigates the role of tourism in promoting economic growth in the Kingdom of Saudi Arabia by using annual time series data from 2003 to 2019.

In the current context, tourism is an essential element in developing the world economy and is one of the leading sources of revenue for advanced and emerging countries (Costa 2017; Mason 2015). Given the study of Turner and Freiermuth (2016), tourism has become a strong pillar for sustainable development for both developed and emerging economies, as it offers various cultural, social, technological, experiential, and natural products for leisure and business. In this connection, the World Travel and Tourism Council (WTTC 2021) revealed that travel and tourism plays a vital role in the creation of jobs, both including its direct, indirect and induced impacts; it estimated that 1 in 4 jobs created across the world, i.e., about 334 million or 10.6% of all jobs, accounted for USD 9.2 trillion, 10.4% of global GDP. Meanwhile, international visitor spending amounted to 6.8% of total exports and 27.4% of global services exports, contributing USD 1.7 trillion in 2019. Thus, tourism is considered a significant part of the trade-in international services and has become a prominent and growing industry.
Tourism participates in a country’s growth and development, primarily by bringing in multiple economic values and benefits, and secondly, by helping to build brand value, image, and identification in the region. As a significant contributor to economic growth, the tourism industry goes beyond attractive destinations (Khalil et al. 2007). It plays a considerable role in boosting the economy of a nation. For most of the country, tourism is supposed to be the main engine for regional development, accelerating recent economic activity. It has a positive impact on revenue growth, job opportunities, gross income, and production, but it can hurt the environment, due to such factors as road congestion, pollution, and ecosystem destruction (Ren et al. 2019). By drawing international tourists, tourism contributes to generating foreign exchange earnings that generate employment, improved infrastructure, and quality of life, contributing to the country’s sustainable economic growth, as tourists add to the area’s sales, profits, salaries, tax revenue, and exports (FaladeObalade and Dubey 2014). The most direct effects are for industries such as hotels, restaurants, transportation, entertainment, and shopping. A literature review suggests that tourism, agriculture, capital, and energy development support growth in most developing nations. The development of tourism has gained global acknowledgement as a motivation for economic growth, agriculture, energy development and alleviating poverty. Tourism development is widely believed to lead to economic growth, although scholars disagree over the empirical research (Khan et al. 2020).
A booming tourism sector can generate the same growth in income such as that from exports of natural resources. Unlike the oil, gas, and mineral extraction industries that trigger natural resource degradation, the tourism sector can become a green sector (Tuncay and Ozcan 2020). In Saudi Arabia, the contribution of GDP and total employment generated by travel and tourism accounted for 9.5% and 11.2% (WTTC 2019); hence it is a viable option to move ahead toward sustainable tourism with less reliance on traditional means of raising economic growth.
The Kingdom of Saudi Arabia is one of the world’s leading economies in terms of tourism. Tourism is crucial to the growth of many economies around the world and has been a subject of extensive research for many years, but very few studies have been conducted in the context of this country. So, this research investigates the role of tourism in promoting economic growth in the Kingdom of Saudi Arabia. The core objective of the study is to examine the role of tourism receipts, tourism expenditure, and number of tourist arrivals on the economic growth of Kingdom of Saudi Arabia and to explore the relationship among these. This study used annual data from 2003 to 2019 and employed basic statistics, correlation coefficients, a unit root test, a Johansen co-integration test, a co-integration regression test and a Granger causality test for the empirical investigation. Given that this study contributes to the body of knowledge on the role of tourism in the economic growth of Saudi Arabia, it also adds a significant value to policy and practice. Precisely, the empirical findings confirmed that the tourism promote economic growth in the kingdom of Saudi Arabia. To the best of the researcher’s knowledge, this is the first paper in the literature to investigate the relationship between economic growth and the number of tourist arrivals in the context of Saudi Arabia, and this is the paper’s main novelty.
To achieve the main objective, the researcher built a graphical framework for the current study, as depicted in Figure 1. The remaining part of the study is organized as follows. Section 2 reviews past studies depicted in the literature review section. Section 3 presents the data and methodology. Section 4 describes the results based on the econometric analysis. Section 5 includes the discussion. Lastly, Section 6 includes the conclusion, limitations, and some future studies. 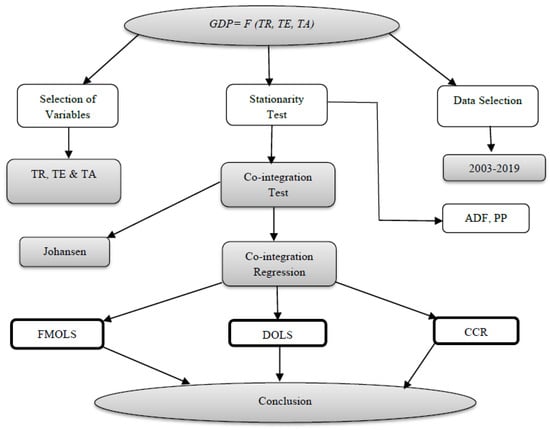 Economic growth has a strong relationship with tourism receipts, tourism expenditures, and the number of tourist arrivals, as the correlation analysis suggests that all the variables have a positive correlation of more than 80 percent. The studied data were tested for unit root test and found to be significant at the zero and first-order difference; later, they were tested for the Johansen co-integration test, which revealed the presence of both short- and long-run relationships among the endogenous and exogenous variables. Thus, they showed a long-run relationship among the variables, leading to the acceptance of Hypothesis 1.
After the co-integration test, the co-integration regression test was executed for FMOLS, DOLS and CCR. The findings of FMOLS revealed that all the exogenous variables have a strong relationship with the endogenous variables; among the exogenous variables, the number of tourist arrivals have the highest coefficient value of 0.62, significant at the 1 percent level, 0.28 for the tourism receipts and 0.256 for tourism expenditure, both significant at the 5 percent level. The DOLS revealed the number of tourist arrivals to be 0.989 and 0.32 for tourism receipts, both significant at the 5 percent level, but the tourism expenditure is not significant. While the CCR reveals that the number of tourist arrivals has a coefficient value of 0.574, 0.317 for the tourism receipts and 0.235 for the tourism expenditures, all are significant at 5 percent. The Hensen instability, Jarque–Bera and adjusted R-square are significant, and thus, the model is stable and viable. Hence, Hypothesis 2 proves to be viable for the number of tourist arrivals.
The Granger causality test revealed that economic growth leads to the number of tourist arrivals of Saudi Arabia, as the same findings were retrieved from other relevant studies that investigated the association between economic growth and tourism by using the Granger causality test on time-series data analysis, including those of Balaguer and Cantavella-Jorda (2002); Durbarry (2004); Gunduz and Hatemi-J (2005); Brida et al. (2008); Chen and Chiou-Wei (2009); Belloumi (2010); Akinboade and Braimoh (2010); Tang and Abosedra (2012); and Tang and Tan (2013).

This study is an effort to explore the tourism sector’s role in determining the economic growth in the Kingdom of Saudi Arabia. The stationarity test showed that tourism receipts, tourism expenditure, number of tourist arrivals, and economic growth become stationary at zero, and the first-order difference. The Johansen co-integration test revealed a long-run relationship among the parameters where economic growth is endogenous and others are exogenous variables. The FMOLS finding revealed that all the exogenous variables have a significant relationship, but the DOLS model revealed that two are significant out of three exogenous variables. Simultaneously, the CCR depicted all the exogenous variables having a significant relationship with the endogenous variable. All three co-integration models are significant and stable as predicted by the Hansen instability test and Jarque–Bera normality test. The study results are significant for policymakers for tourism in Saudi Arabia. This study presents strong empirical findings about the long-run and short-run relationships between tourism and economic growth. It is proposed that policymakers should give considerable attention to the promotion of sustainable tourism to boost economic growth in Saudi Arabia. Moreover, policymakers should pay significant attention to domestic and international tourism in Saudi Arabia, improve the infrastructure of various tourist attractions and streamline the visa application procedure for international visitors.
This study has some limitations. These limitations may necessitate future studies. Firstly, the current study was conducted in the context of Saudi Arabia; future research studies should be conducted in other developing countries to ensure that the findings are generalizable. Secondly, the current study relied on secondary data. Hence, future research may concentrate on primary data to investigate the effect of the tourism industry on economic growth. Lastly, this study used relatively short-length annual time series data, so future research can use long length data with more advanced techniques and variables.