Type 2 diabetes mellitus is a complex multifactorial disease characterized by insulin resistance and dysfunction of pancreatic β-cells. Rice husk silica liquid (RHSL) is derived from rice husks and has not been explored in diabetes mellitus until now. Previous studies showed that rice husk is enriched with silica, and its silica nanoparticles are higher more biocompatible. To investigate the potential protective role of RHSL on pancreatic β cells, we utilized RIN-m5F pancreatic β cells and explored RHSL effect after streptozotocin (STZ)-stimulation. The recovery effects of RHSL were evaluated using flow cytometry, Western blotting, and immunofluorescence analysis. Results of our study showed that RHSL reversed the cell viability, insulin secretion, reactive oxygen species (ROS) production, and the change of mitochondria membrane potential (ΔΨm) in STZ-treated RIN-m5F cells. Moreover, the expression of phospho-receptor-interacting protein 3 (p-RIP3) and cleaved-poly (ADP-ribose) polymerase (PARP), phospho-mammalian target of rapamycin (p-mTOR), and sequestosome-1 (p62/SQSTM1) were significantly decreased, while the transition of light chain (LC)3-I to LC3-II was markedly increased after RHSL treatment in STZ-induced RIN-m5F cells. Interestingly, using autophagy inhibitors such as 3-methyladenine (3-MA) and chloroquine (CQ) both showed an increase in cleaved-PARP protein level, indicating apoptosis induction.

Type 2 diabetes mellitus (T2DM) is a chronic metabolic disorder that has become a global concern [1]. The major pathogenesis involves the loss or destruction of pancreatic β cells, which in turn induces the state of imbalance between insulin secretion and blood sugar control in the body [2]. Streptozotocin (STZ) is a kind of glucosamine-nitrosourea compound and widely used as a broad-spectrum antibiotic and cytotoxic chemical [3]. Due to its structural similarity to 2-deoxy-D-glucose, it can enter pancreatic β cells through the GLUT2 glucose transporter and efficiently accumulates intracellularly. Intracellular accumulation induces DNA alkylation and exposes the cells to reactive oxygen species (ROS) and nitric oxide (NO) with subsequent damage, ultimately provoking diabetogenic action [4]. Diabetes induced by STZ is the most similar to the structural, functional and biochemical changes observed in human diabetes, so it is often used to simulate diabetes models in animal experiments [4][5] as well as to verify the mechanism of pancreatic β-cells in in vitro experiments [6], which involve mitochondrial dysfunction, ROS production, necrosis, and apoptosis.
Silicon (Si) is known as an essential component of collagen and glycosaminoglycan formed in bones and cartilage [7][8]. Several studies also demonstrated that dietary Si intake has benefits on bone mineral density [9][10]. In addition, Si showed an anti-diabetic effect by lowering blood glucose level, improving the tolerance to insulin and reducing the risk of glomerulopathy [11]. Previous studies have demonstrated rice husk is enriched with silica, and its silica nanoparticles are more biocompatible [12], thus expecting more applications in the food industry. However, food inspection and functional analysis of rice husk silica (RHS) remain insufficient. Furthermore, the potential anti-diabetic role of rice husk silica liquid (RHSL) on pancreatic β cell has not been explored by any research so far. Herein, we designed the present study to further investigate the mechanisms by which RHSL can protect against T2DM, aiming to shed new light on T2DM prevention by plant-derived silica.

2.1. The Effect of RHSL and STZ on RIN-m5F Cells Viability

To investigate the effects of STZ on RIN-m5F cells, cell viability was quantified after exposing the RIN-m5F cell to toxin STZ. Our data indicated that STZ caused cytotoxicity in a dose and time-dependent manners (Figure 1A, p < 0.001). Briefly, STZ at 2 mM for 24 h markedly reduced the viability of RIN-m5F cells to ~60% (Figure 1A, p < 0.001). Based on these results, all subsequent experiments in this study were performed using 2 mM STZ as the induction model. On the other hand, we used different doses of RHSL from 400-fold dilution to 100-fold dilution and observed that RHSL treatment can enhance cell viability, especially at 200-fold and 100-fold dilution, which both significantly increased cell viability compared to the control group for 24 and 48 h in a dose-dependent manner (Figure 1B,C, p < 0.001). 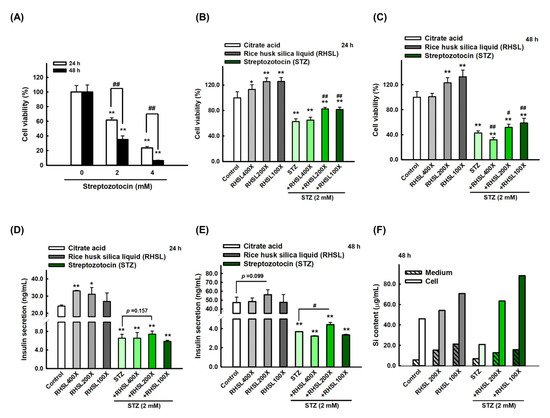 2.2. STZ Inhibits Insulin Secretion and Silicon Content in RIN-m5F Cells Which Is Restored by RHSL Co-Treatment 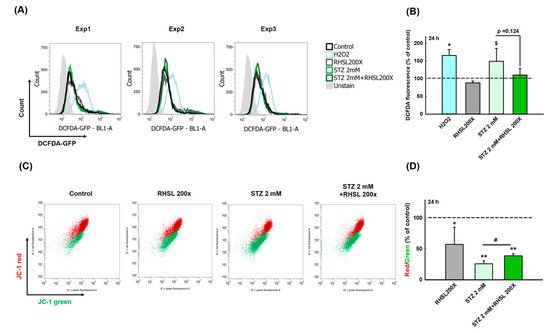 The current study provides new insights regarding the potential utility of rice husk silica liquid (RHSL) in T2DM, RHSL abrogated the effect of streptozotocin (STZ) on the mass of RIN-m5F pancreatic β cells and the ability of insulin secretion, via reducing the reactive oxygen species (ROS) production, recovering the depolarization of mitochondrial membrane potential (ΔΨm), as well as reversing the expression of cleaved-PARP, p-RIP3, p-mTOR, p62/SQSTM1, and LC3B protein. The proposed mechanisms of RHSL action in the prevention of STZ-induced RIN-m5F cell death were summarized in Figure 6. 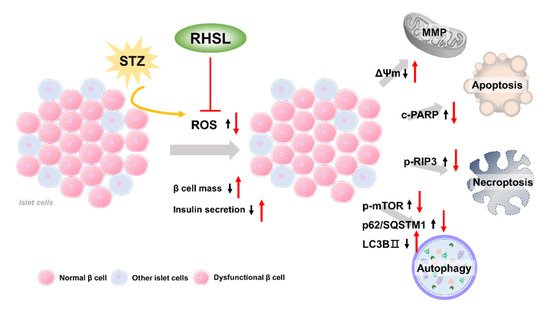