Doubly uniparental inheritance (DUI) of mitochondrial DNA (mtDNA) in bivalve mollusks is one of the most notable departures from the paradigm of strict maternal inheritance of mtDNA among metazoans.

The first extensive analysis of putative sperm transmission elements (STEs) in bivalve mollusks with the DUI system for mitochondrial DNA comes from the study by Kyriakou et al. [10], which focused on Mytilus spp. Accordingly, we used the 22 bp motif identified by those authors as a starting point to search for STEs in other bivalve mitochondrial genomes. As a critical first step, we needed to specify the search parameters to find a similarity threshold range that would minimize both false positive matches (i.e., searches that falsely identify non-homologous regions as matches due to low stringency) as well as minimizing false negative searches (i.e., searches with a stringency set so high that no or virtually no homologous regions were identified). As outlined earlier, a threshold of T = 56 for the known motif signature along with a sliding window length of 22 bp met these criteria (Figure 1a,b).
Using the calibrated sliding window method above, we were able to identify a total of 23 STE-like signatures associated with LURs from the 157 mitochondrial genomes screened. Figure 1c shows the nucleotides identified as having homology to the known STE motif (pink). The 30 bp upstream from each signature (with adenines highlighted yellow) is also shown in Figure 1c. Out of the total LUR-associated putative STEs, four are previously known from Kyriakou et al. [10] (Map Codes 3, 4, 5, and 8) and one is the known STE motif (★), these are highlighted grey (Figure 1c). The STE signature from M. trossulus M (Map Code 8) was manually added to the analysis, as its relatively low sequence similarity makes it interesting for comparative purposes, yet it could not be identified using our search strategy (hence, this motif represents a true positive that falls below the threshold of detection). The degree of sequence similarity between the putative STE motifs of Figure 1c and the known STE is shown in Figure 2. Putative motifs range in sequence similarity from 62.5% (15/24bp) to 100% or 22/22bp. 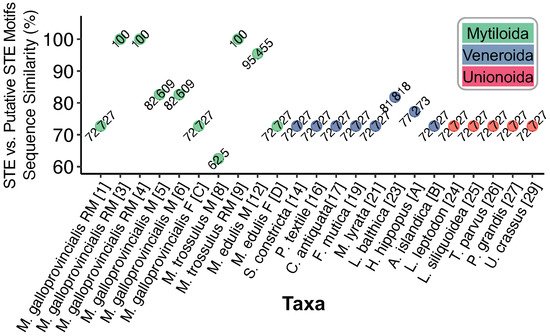 Figure 2. Degree of sequence similarity between STE-like signatures and the known 22 bp STE motif from Kyriakou et al. [10]. Nucleotides were aligned using MUSCLE [22].
We further investigated whether the mitochondrial genomes housing putative STE motifs in their LURs also displayed evidence of additional STE homology to other parts of their mitochondrial genomes (i.e., outside the LURs). The full genome maps for protein-coding genes, tRNAs, and putative STE motif signatures are given (Figure 3). As illustrated, for many of the genomes [12/20 mtDNAs] these motifs were only localized to the unassigned/control region (Figure 3). Interestingly, for the eight genomes with additional motifs outside the LURs, these were in many cases on the complementary DNA strand to the protein-coding or rRNA gene they were identified in and were usually associated with either 16S (often), as well as nd5, atp6, or co1 (less often; Figure 3). The localization of many putative STE motifs to LURs is interesting given that nearly two decades ago, Burzyński et al. [23], Zbawicka et al. [24] and Cao et al. [25] suggested that genetic signatures associated with DUI signaling were probably to be found in the non-coding portion of mtDNA as these unassigned regions or control regions, as they are variously called, are the mtDNA regions primarily associated with recombination events leading to the formation of masculinized mitochondrial genomes in the family Mytilidae. 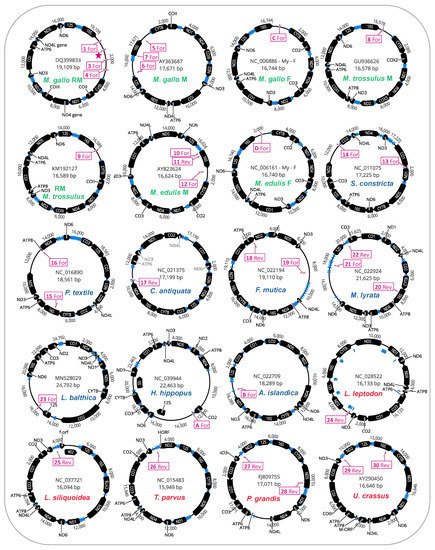 Figure 3. Mitochondrial genome maps for bivalve species exhibiting putative STE motifs localized to large unassigned regions in mtDNA. STE-like signatures are identified by map codes within boxes (these correspond to codes in Figure 1c) and can either be found on the Reverse (Rev) or Forward (For) mtDNA orientation. M. gallo refers to M. galloprovincialis.
The phylogenetic distribution of bivalve mitotypes exhibiting putative STE signatures within their LURs is shown in the tree diagram presented in Figure 4. It is important to note that the Neighbour-joining tree in Figure 4 is based on the alignment of complete co1 sequences. Although the tree is computationally quite simple, it nevertheless does an adequate job of representing the known broader evolutionary relationships previously indicated in the literature [1][26]. Overall, the phylogeny indicates that several distantly related clades from across the Unionida, Veneroida and Mytiloida have signatures similar to the known 22 bp STE motif (Figure 4). For those in Unionoida and Veneroida, signatures were found in thirteen species: three in DUI paternal genomes, two in DUI maternal genomes, one in an SMI hermaphroditic genome, and seven in genomes of unknown inheritance pattern for which we suppose are maternally-transmitted mtDNA (Figure 1). Despite our widespread finding of this signature, we did not observe their presence among taxa as a monophyletic group, nor were the signatures limited to male-transmitted genomes (Figure 4). For both trends, we must consider more closely that recombination between DUI mitotypes may obfuscate evolutionary patterns. As indicated earlier, recombination and masculinization of mtDNA genomes were demonstrated in the Mytilidae [13][27][28], and recombination and role-reversal have been events implicated in the other DUI positive bivalve orders [7][11]. Some of the male-transmitted mitochondrial genomes that were used during our analysis were known to be chimeric and, indeed, all M-types could be chimeric or derived from a chimeric ancestor. This means that the putative STE motifs are being mapped onto a genome tree rather than a gene tree. If we could confidently determine that recombination had occurred repeatedly and could reconstruct the recombination events throughout the hundreds of millions of years of bivalve evolutionary history, then we could determine whether the STE motif is monophyletic. Monophyly of the STE motifs across all bivalves would be strong evidence that the phenomenon evolved once. However, given the extremely long time periods involved, and the extremely small length of the putative STEs, reconstructing the evolutionary history of such events with greater confidence than we present here is highly unlikely. On a similar note, it is also possible that the putative STE motifs localized to F-type genomes could be the product of failed masculinization events (as suggested by the mt genomes analyzed in [13][29]), or alternatively, they may instead represent non-functional STEs that have yet to acquire enough nucleotide differences via mutation to appear dissimilar to the functional STE (as implied by sequences in Kyriakou et al. [10] for the M. galloprovincialis F-type genome). Accordingly, the presence of STE-like signatures in F-types does not allow us to definitively argue that DUI arose only once, in an ancestor to the Mytiloida, Unionoida, and Veneroida orders. If the DNA sequence motif of the STE was only found in sperm transmitted genomes and could be shown to be present in the Mytiloida, Unionoida, and Veneroida, then the most reasonable explanation would be that the phenomenon had evolved only once. While this is still the most parsimonious explanation, it is possible that the M-type sequestration mechanism evolved independently three or more times in the history of the Bivalvia. Analysis of additional complete sequences of M and F mitochondrial genomes in the future should help test hypotheses of putative cases of recombination and masculinization within particular bivalve orders, which should, in turn, shed more light on the roles of STEs and uncharacterized mitochondrial open reading frames (ORFs) in the origin and maintenance of DUI across the Bivalvia [8]. 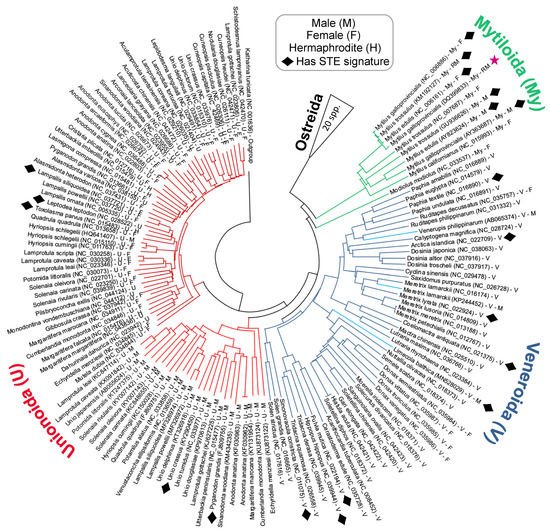 Figure 4. Taxonomic distribution of STE-like signatures discussed in this study. The phylogeny is a Neighbor-joining tree with 1000 bootstrap replicates reconstructed in MEGAX [30][31]. Full-length co1 genes were aligned using MUSCLE [22] and trimmed to a conserved start/end nucleotide. ★ = Known STE motif from Kyriakou et al. [10]. The Hyriopsis schlegelii male sequence is likely an F-type genome derived from a male individual [32].
Despite these aforementioned challenges in understanding the evolutionary history of STEs, our search for putative STE motifs amongst a larger set of bivalve mitochondrial genomes has allowed for two major steps of progress in our understanding: (i) our analyses suggest that the STE signature may represent a unifying feature that is present within LURs from all three of the major lineages of bivalves exhibiting DUI (clams, freshwater mussels, and marine mussels) despite its origins still remaining unclear; and (ii) using the putative STEs identified herein, we are now positioned to design targeted electrophoretic mobility shift assays to detect DNA-protein complexes in Unionoida and Veneroida as was done for Mytiloida [10]. The most promising lineage currently appears to be Limecola balthica given its 81% similarity to the 22 bp STE motif (Figure 2). Moving forward, if the same DNA-protein complexes, and localization of perinuclear mitochondria can be demonstrated in the Unionoida as well as the Veneroida, this would be further strong evidence that the DUI phenomenon evolved once, but that there were subsequent role-reversal/recombination events in the ancestors to these two orders of bivalves as well.