Lewy body dementias (LBDs) consist of dementia with Lewy bodies (DLB) and Parkinson’s disease dementia (PDD), which are clinically similar syndromes that share neuropathological findings with widespread cortical Lewy body deposition, often with a variable degree of concomitant Alzheimer pathology. The objective of this article is to provide an overview of the neuropathological and clinical features, current diagnostic criteria, biomarkers, and management of LBD. Literature research was performed using the PubMed database, and the most pertinent articles were read and are discussed in this paper. The diagnostic criteria for DLB have recently been updated, with the addition of indicative and supportive biomarker information. The time interval of dementia onset relative to parkinsonism remains the major distinction between DLB and PDD, underpinning controversy about whether they are the same illness in a different spectrum of the disease or two separate neurodegenerative disorders. The treatment for LBD is only symptomatic, but the expected progression and prognosis differ between the two entities. Diagnosis in prodromal stages should be of the utmost importance, because implementing early treatment might change the course of the illness if disease-modifying therapies are developed in the future. Thus, the identification of novel biomarkers constitutes an area of active research, with a special focus on α-synuclein markers.

Lewy body dementia is an umbrella term that includes Parkinson’s disease dementia (PDD) and dementia with Lewy bodies (DLB), which are two entities on a spectrum of Lewy body disease. The two disorders share many clinical and pathological features, including the deposition of widespread limbic and cortical Lewy bodies and Lewy neurites composed of aggregates of α-synuclein (α-syn) [1] and loss of midbrain dopamine cells and cholinergic neurons in the ventral forebrain nuclei [2].
DLB is the second most common form of dementia after Alzheimer’s disease (AD). However, previous studies have shown a wide prevalence variation, probably due to DLB being underdiagnosed [3]. In a systematic review of twenty-two studies addressing the prevalence and incidence of DLB [4], DLB accounted for 3.2–7.1% of all dementia cases in the incidence studies, and the point and period prevalence estimates increased with age and ranged from 0.02 to 63.5 per 1000 persons. Nevertheless, these numbers probably underestimate the true prevalence and incidence of DLB because misdiagnosis as AD is common [3].
In addition to the common motor manifestations of Parkinson’s disease (PD) (tremor, rigidity, akinesia), other non-motor manifestations, such as sensory abnormalities, autonomic dysfunction, and behavioral and cognitive changes, are common [5][6]. About 25% of patients newly diagnosed with PD fulfill the diagnosis of mild cognitive impairment (PD-MCI) [7][8]; at follow-up (mean follow-up 23.5 ± 10.3 months), 33.3% of the PD cognitively normal patients develop MCI and 4.8% convert to PDD, resulting in an incidence rate of 123.5/1000 per year (95% CI 70.3–202.2) [9]. Most individuals with PD have MCI or dementia with the progression of the disease [10][11][12], which occur in up to 83% of cases after 20 years of disease duration [13].
The diagnosis of PDD and DLB is challenging because many clinical manifestations and additional findings in the examinations overlap. However, reaching an early and accurate diagnosis is critical to disentangle the heterogeneity of these two entities, and to develop proper and specific clinical trials of neuroprotective therapies, thus providing an early optimal treatment and a correct prognosis to patients and caregivers. The purpose of this article is to provide an overview of the main neuropathological findings, clinical features, current diagnostic criteria, principal biomarkers, and management of DLB and PDD.

PD subjects who develop dementia do not need further complementary examinations as per the PDD diagnostic criteria [14] (see Figure 1). Like in DLB, a comprehensive neuropsychological evaluation including the assessment of specific cognitive domains (attention, memory, executive functions, language, construction, praxis, and visuospatial functions) is useful to assess the specific profile of cognitive impairment. 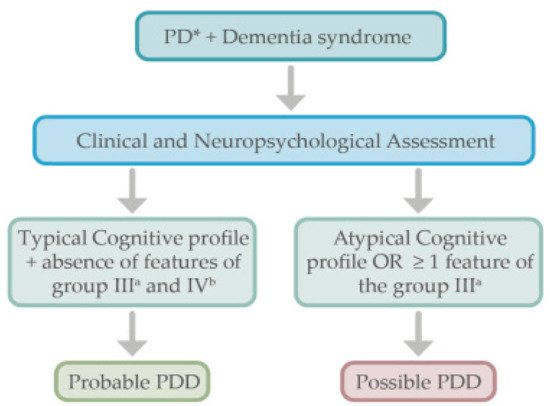 Figure 1. Proposed algorithm for the diagnostic approach in Parkinson’s disease dementia. * Parkinson’s disease diagnosis must be present. a See Table 1 for the group III features. b See Table 1 for the group IV features.
The diagnosis of DLB is based on the clinical history, physical evaluation, and neuropsychological assessment. When two core clinical features are present, the diagnosis of probable DLB is made, but in the case of only one core feature, the positivity of one or more indicative biomarkers (e.g., DAT-scan or 123IMBG) helps in the diagnosis of probable DLB.
Moreover, for those patients in which dementia syndrome does not meet any of the core features of DLB, indicative biomarkers could be performed to establish the diagnosis of “possible” DLB or other neurodegenerative processes such as AD [15][16]. For those patients with atypical findings (e.g., a cognitive profile affecting memory rather than executive or visuospatial dysfunction), or for those patients with dementia in which only one of the core features of DLB is present, the use of functional imaging (e.g., DAT scans) or other indicative biomarkers may help in the diagnosis of probable DLB (see Figure 2). Supportive biomarkers such as FDG-PET, showing the typical “island sign,” or a brain MRI with relative preservation of medial temporal lobe structures, increase the certainty of a DLB diagnosis [17]. 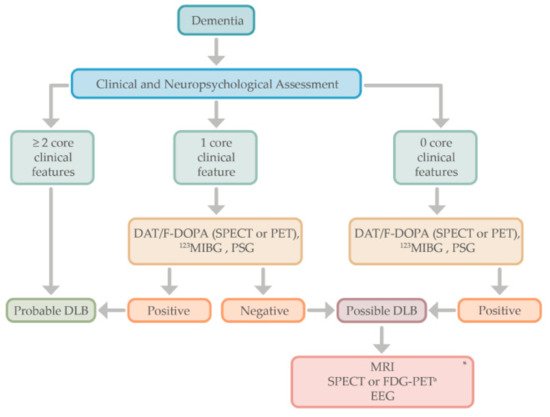 Neuropsychiatric manifestations are common in LBD patients. Depression, anxiety, and apathy are frequent in PDD and DLB [18][19][20][21][22], and they are included as supportive and associated features of both entities (Table 1). They may share a similar substrate, with depression being one of the most studied non-cognitive psychiatric disorders in PD, occurring in up to 50% of PD patients at some point in the course of their illness [21]. Depression is also linked to cognitive impairment [23][24]. Moreover, premorbid depression has been shown to be significantly more common in PD patients than in those without a diagnosis of PD [6][25][26], preceding the motor symptoms and possibly dementia diagnosis of LBD [6][22]. Depression in DLB is also very frequent, with a prevalence of approximately 28% [27], and overall, depression in LBD is more frequent when compared to AD [28].
Apathy, defined by reduced initiative and motivation, appears to be equally common in PDD and DLB, reported in 54% of PDD patients [29] and in 57% of DLB [30]. Moreover, apathy appears to be associated with more serious symptomatology in DLB and faster cognitive decline [31]. Regarding anxiety, comparisons of its prevalence in PDD and DLB are lacking [32], but appear to be worse in DLB compared to in AD [33].
The psychosis spectrum in PD was recently reviewed [34] and includes minor experiences or hallucinations, such as passage and presence hallucinations or illusions in the early stages of PD [19], and well-formed complex recurring visual hallucinations with other modalities of hallucinations and delusions in later PD stages. The presence of cognitive impairment, depression, and dopaminergic use have been described as risk factors for hallucinations [35], and its phenomenology in PDD and DLB is very similar, with the majority of patients experiencing recurrent, complex visual hallucinations—seeing adults or small children, deceased family members, or small animals [1]. Visual hallucinations are usually more frequent and severe in DLB than in PDD (76% vs. 54%) [22], whereas auditory and other modalities of hallucinations are less prevalent in both entities [36][37]. Although hallucinations in PD may be triggered by the use of dopaminergic therapies, they can occur in drug-naïve PD patients [38]; however, they appear more often in DLB spontaneously [18].
A study analyzed the utility of pareidolias, measured by the Pareidolia test, as a surrogate indicator of visual hallucinations in patients with DLB [39]. The authors found that pareidolic responses were observed more frequently in patients with DLB than AD or healthy controls, and were detected even in patients without visual hallucinations. Thus, they proposed that pareidolic responses could be a possible predictive marker of DLB. In other study including PD patients without dementia [40], authors found that the number of pareidolic illusions correlated with hypometabolism in the bilateral temporal, parietal, and occipital cortices, which may suggest that posterior cortical dysfunction could be a common neural substrate of pareidolia and visual hallucinations. However, the test has not been properly assessed in PDD, so its utility as a diagnostic tool is not known.
In summary, although behavioral and neuropsychiatric symptoms are common in both PDD and DLB, most of the studies have shown that some of them, such as visual hallucinations and delusions, are more prevalent and severe in DLB compared to PDD [18][22]. Mood disturbances such as depression or apathy appear to be equally common in both disorders, but these are higher than in AD population. The use of questionnaires and other tools assessing neuropsychiatric symptoms in patients with LBD is relevant to obtain an adequate characterization of these manifestations and may help in the diagnosis.