Recently, Zuotin-related factor 1 (ZRF1), an epigenetic regulator, was found to be involved in transcriptional regulation. In animals and humans, ZRF1 specifically binds to monoubiquitinated histone H2A through a ubiquitin-binding domain and derepresses Polycomb target genes at the beginning of cellular differentiation. In addition, ZRF1 can work as a tumor suppressor. According to bioinformatics analysis, ZRF1 homologs are widely found in plants.

Epigenetics is the study of inherited changes in phenotype (appearance) or gene expression caused by mechanisms other than the changes in the underlying DNA sequence; hence, the name epi- (Greek: επί- over, above) genetics. Epigenetic regulatory mechanisms comprise histone post-translational modifications, histone variants, DNA methylation, and ATP-dependent chromatin remodeling, which are essential for controlling patterns of gene expression during the cell cycle, development, and in response to environmental stimuli. More importantly, epigenetic changes may be reversed [1][2]. DNA methylation has been generally considered a heritable chromatin modification mark that plays important roles in maintaining chromosome stability, regulating transposon silencing, and regulating gene expression [3][4]. Histone post-translational modifications include methylation, acetylation, phosphorylation, ubiquitination, and sumoylation; they are dynamic changes and play key roles in regulating chromatin structure and gene expression, mainly by changing chromatin compaction and shaping the three-dimensional topology of the genome [5][6][7].
Polycomb Group (PcG) proteins are evolutionarily conserved transcriptional regulators, which are essential for the control of development and cell differentiation in plants and animals. Polycomb-mediated transcriptional regulation is mediated by two major multisubunit complexes: Polycomb Repressive Complex 2, which catalyzes histone H3 lysine 27 trimethylation (H3K27me3) on target chromatin, and PRC1, which not only recognizes and binds H3K27me3, but also catalyzes the mono-ubiquitination of histone H2A lysine 119 (H2AK119ub1), resulting in a stable silencing chromatin state [8].
Zuotin-related factor 1 (ZRF1) (also known as DNAJC2, MIDA1, Mpp11, and GlsA) has been characterized as an epigenetic factor involved in transcriptional regulation. In most species, ZRF1 protein is evolutionarily conserved. The N-terminal of all homologs of ZRF1 has a zuotin domain, which is composed of a DnaJ domain and a potential ubiquitin-binding domain (UBD). The C-terminal contains tandem repeats of SANT (Swi3, Ada2, NcoR1 and TFIIIB) domain, but only exists in higher eukaryotes [9][10]. It has been reported that human ZRF1 protein can specifically recognizes and bind to monoubiquitinated histone H2A through UBD, and activates polycomb-repressed target genes through the E3 ubiquitin ligase activity of Ring1B at the onset of cellular differentiation (e.g., stem cell differentiation, the neuronal lineage, and mesodermal lineage) [10][11][12][13]. In mice, based on the CRISPR/Cas9 approach, it was first suggested that DNAJC2 was necessary during early mouse embryogenesis [12]. Moreover, the nuclear epigenetic factor ZRF1 participates in senescence and is involved in certain cancers [14][15][16][17]. Research evidence suggests that ZRF1 can be phosphorylated on Ser47 residues by S6 kinases 1 and 2 (S6Ks) and participates in a senescence programme by regulating the cell cycle inhibitor p16 [18]. It is very interesting that ZRF1 has a dual role. Not only does it work as a tumor suppressor, but it can also induce carcinogenesis depending on the cellular context [14][19]. In addition, ZRF1, a switch protein, remodels chromatin-bound E3 ligases during lesion recognition [20]. Under ultraviolet radiation, the endonuclease DICER and ZRF1 are required for chromatin decondensation. DICER was recruited into chromatin in a ZRF1-mediated manner. H2A ubiquitin-binding protein ZRF1 interacts with DICER to affect chromatin conformation through chromatin remodeling factors PARP1 [21].
Over the past several years, the functions of ZRF1 in animals and humans have been identified and have become a new research hotspot. In most species, ZRF1 is evolutionarily conserved [9][22]. According to bioinformatics analysis, ZRF1 homologs are widely found in plants (e.g., A. thaliana, Lilium longiflorum, Alstroemeria aurea, Volvox carteri), and LlglsA (L. longiflorum gonidialess A) was identified as the first higher plant homolog of glsA/ZRF1 [22][23][24][25]. However, current studies of ZRF1 in plants are limited, and few in-depth studies of its functions have been reported.

2. ZRF1 Orthologs and the Domain Structure in Arabidopsis

In Arabidopsis, two ZRF1 proteins (AtZRF1a and AtZRF1b) have been identified, and they share 81% sequence identity. AtZRF1a gene, encoding a 74 kDa protein consisting of 647 amino acids, is located on chromosome 3 (At3g11450). AtZRF1b gene, encoding a 75.6 kDa protein composed of 663 amino acids, is located on chromosome 5 (At5g06110). There are no introns within the coding region of both AtZRF1a and AtZRF1b [22]. Both AtZRF1a and AtZRF1b are broadly expressed in various plant organs/tissues, and the single loss-of-function mutants atzrf1a and atzrf1b showed normal phenotypes, while the double mutants atzrf1a atzrf1b have a pleiotropic phenotype [22]. Taken together, the data demonstrate that AtZRF1a and AtZRF1b have redundant functions [22].
The ZRF1 protein structure is highly evolutionarily conserved, and several domains have been annotated [9][14]. Similar to human ZRF1, AtZRF1a and AtZRF1b also contain two major recognizable types of structural domains, namely, the Zuotin domain (Z-DNA binding domain) and SANT (Swi3, Ada2, NcoR1, and TFIIIB) domains (Figure 1 and Figure 2). Zuotin contains a highly conserved DnaJ domain (J-domain), which is similar to the mammalian HSP-40 (heat shock protein 40) chaperone, mediating interactions with heat shock proteins (Hsp70). The green alga V. carteri ZUO1/ZRF ortholog Gonidialess A (GlsA) can bind to the corresponding Hsp70 chaperones, and this interaction is required for asymmetric cell division [26][27]. Zuotin also contains a ubiquitin-binding domain (UBD) domain/M region, which is adjacent to the C terminus of the J-domain. Human MPP11/ZRF1 can bind to the H2Aub epigenetic marker and replace Polycomb repressive complex 1 (PRC1) through the UBD domain [10]. Interestingly, AtZRF1b can bind ubiquitin and can pulldown H2Aub1 via the UBD domain; the loss of AtZRF1a/b does not cause an increase in H2Aub1 but rather results in a very slightly reduced global level of H2Aub1 in atzrf1a-1 atzrf1b-1 mutant plants [22]. Unfortunately, there is no relevant experimental evidence for the interaction between ZRF1a and H2Aub. Except for fungal proteins, all known ZRF1 orthologs contain the tandem repeat of SANT domains at the C terminus. SANT domain proteins can recruit histone acetylases or deacetylases to modify histone tails [28][29][30], but their specific functions remain to be addressed in plants. 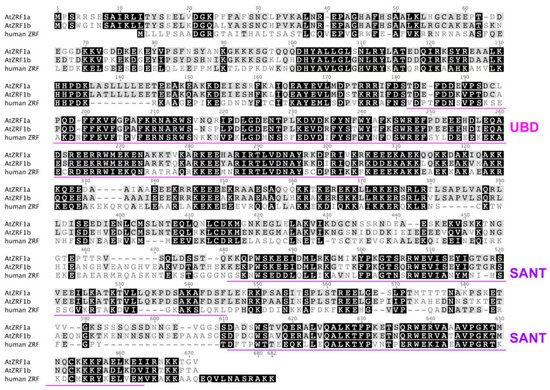 Figure 2. Sequence alignment of AtZRF1a and AtZRF1b together with the human ZRF1. The alignment was generated using the CLUSTALW program. The UBD and SANT domains are indicated [22].

A seed consists of a plant embryo and an endosperm enclosed by a seed coat. Several studies have shown that PRC1 is involved in seed development and seedling growth [31][32][33]. The double mutants Atring1a Atring1b, as well as Atbmi1a Atbmi1b, exhibit derepression of embryonic traits in somatic plant tissues, due to the lack of AtRING1 or AtBMI1, the key catalytic factors of PRC1. For example, ectopic callus formed in cotyledon, leaf or SAM region of mutant plants [31][32]. CURLY LEAF (CLF), EMBRYONIC FLOWER2 (EMF2), VERNALIZATION2 (VRN2) and SWINGER (SWN) are PRC2 components, the clf swn and emf2 vrn2 mutants also exhibit ectopic cell dedifferentiation and somatic embryogenesis [34]. Investigation of the triple mutants Atring1a Atring1b clf revealed that the expression of embryo regulatory genes was increased [32][35]. These genetic data suggest that PRC1 and PRC2 jointly regulate embryonic regulatory genes to prevent somatic dedifferentiation.
Compared with wild-type seeds, the seeds of atglsa1-3 atglsa2-1 double mutants are shriveled, wrinkled, distorted, and small [23]. In atzrf1a-1 atzrf1b-1 and atzrf1a-2 atzrf1b-1 double mutants, plants are poorly fertile and seed abortion is observed. Based on reciprocal crosses of heterozygous mutant plants with wild-type Col-0 plants, male and female transmissions were impaired. Some seedlings (about 35%) exhibited a single cotyledon, asymmetrical cotyledons, and fleshy narrow cotyledonous phenotypes, which display some defects similar to Atbmi1aAtbmi1b and Atring1aAtring1b [22]. Through electron microscopy, severe defects in all stages of embryo development were observed, such as at the pre-globular, octant stage, unorganized division, and a lack of suspensor development; at the globular stage, failure of hypophysis development [23]. These phenomena suggest that ZRF1a/b plays a very important role in embryo development. In humans/mice, PRC1 and PRC2 are epigenetic repressors required for proper embryonic stem cells differentiation and embryo development [36]. ZRF1 can replace PRC1 from Chromatin by competing for H2Aub1 markers, thus inducing de-repression of neural genes [10][11]. However, in plants, the relationship between ZRF1 and PRC1/PRC2 in regulating embryonic development is not clear.
Seed germination is the first step in plant postembryonic growth, which is regulated by various pathways. The primary energy for seed germination in higher plants comes from seed storage products. The expression of seed developmental genes (e.g., ABI3 (ABA INSENSI-TIVE 3), CRA1 (CRUCIFERIN1), CHO1 (CHOTTO1)) should be silenced from seed germination to the whole plant growth and development process [37][38][39]. Under standard growth conditions, the double mutants atzrf1a-1 atzrf1b-1 and atzrf1a-2 atzrf1b-1 showed delayed seed germination. ABI3, CRU1/CRA1, CRU3, and CHO1/AIL5, were up-regulated in atzrf1a atzrf1b mutants as well as in atbmi1a atbmi1b mutant seedlings. Further, within the ABI3, CRU3, and AIL5 gene loci, both H2Aub1 and H3K27me3 levels were strongly reduced. Previous studies have shown that de-suppression of ABI3, CRU3, and AIL5 expression is associated with decreased levels of H2Aub1 and H3K27me3 in atbmi1a atbmi1b mutants [22][33]. These results indicate that ZRF1a/b is required to enhance H2Aub1 and H3K27me3 levels for suppressing seed developmental genes in seedlings, similar to AtBMI1a/b. Since ZRF1 is associated with H2Aub1 de-deposition in animals, it is suspected that the complementary mechanisms of the interaction between AtZRF1A/B-H2Aub1 and AtZRF1A/B-PRC1/PRC2 may be involved in the deposition of H2Aub1 and H3k27me3, thus effectively silencing seed development genes and promoting plant vegetative growth. However, further experiments are needed to test this hypothesis.