Chronic Obstructive Pulmonary Disease (COPD) is a chronic inflammatory disease with multisystemic manifestations. Studies either held on stable disease patients or during exacerbations, have demonstrated that COPD is strongly related to venous thromboembolism and cardiovascular events.

Chronic Obstructive Pulmonary Disease (COPD) is a chronic debilitating lung disease with a high prevalence of approximately 380 million cases worldwide [1]. It is currently the third leading cause of death, responsible for approximately 6% of the world’s total deaths (approximately 3.3 million annually) [2]. In addition to the known devastating respiratory consequences, a large number of studies support the hypothesis that COPD increases the risk for both venous thromboembolism (VTE) and cardiovascular disease (CVD). Thus, patients with COPD exhibit an enhanced risk of pulmonary embolism and deep vein thrombosis compared to randomly matched COPD-free subjects [3], and are also more likely to be diagnosed with cardiovascular disease compared with non-COPD subjects, having nearly 2.5 times the risk of CVD [4]. Although the observed association of COPD with CVD and VTE can be partially explained by comorbidities and shared risk factors, there is strong evidence that COPD increases the risk for cardiovascular morbidity and mortality independently of age, gender, and smoking history [5][6]. It is of note that up to 63.5% of patients with COPD die of comorbid circulatory system diseases [7].
Increased thrombin formation [8], reflected by elevated thrombin–antithrombin complexes [9], tissue factor procoagulant activity [10] and activated factor XI [11], increased d-dimers [12], and FI [13], FII and FX [14] levels in the serum of COPD patients support the theory that a hypercoagulable state occurs in patients with COPD and might contribute to the incidence of atherothrombotic events and VTE, increasing disease related morbidity and mortality. Pulmonary embolism accounts for approximately 10% of deaths in patients with stable COPD, on long term oxygen therapy (LTOT) [15]. Kim et al., demonstrated that BMI, exercise capacity, and medical comorbidities were significantly associated with VTE in moderate to severe COPD and that physicians should suspect VTE in patients who present with dyspnea and should consider possibilities other than infection as causes of COPD exacerbation [16].
Potential pathways illustrating pathogenetic mechanisms of increased risk of CVD and VTE in COPD are imprecise. Evidence illustrates four possible synergistic mechanisms: systemic inflammation [17], platelet activation [18], oxidative stress [19], and hypoxia, either sustained in severe COPD or intermittent during exercise and sleep [20][21]. COPD is a disease where both local and systemic inflammation is present [17]. Prolonged systemic inflammation in COPD is indicated by increased serum concentrations of inflammatory markers such as fibrinogen, C-reactive protein (CRP), interleukin 6, interleukin 8, and TNF-a [22]. The inflammatory response and the activation of coagulation are two important mechanisms of a host’s defense response against infection that do not work independently, but conjointly in an intricate and synchronous process [23]. Several investigators have suggested that low-grade inflammation in COPD largely contributes to a prothrombotic state [24]. Platelets serve a crucial role in hemostasis and inflammation [18]. Activated platelets produce several prothrombotic factors that also act as inflammatory signals, such as platelet factor 4, plasminogen activator inhibitor (PAI-1), von Willebrand factor (vWF), and fibrinogen [25]. Platelets also secrete soluble P-selectin and CD40L, which serve a dual purpose of promoting thrombus formationand activating inflammatory cells [23]. Platelet P-selectin has been shown to bind PSGL-1 on leukocytes to promote fibrin degradation and tissue factor release.
Oxidative stress is triggered by reactive oxygen species, predisposing to thrombosis by impairing red blood cells’ quality and function [26], inducing endothelial dysfunction and injury, and activating leukocytes, consequently affecting the clotting system [19][27]. Oxidative stress also elevates reactive oxygen species within platelets that can augment platelet activation and thrombotic susceptibility [18]. Mechanisms by which hypoxia can stimulate a prothrombotic response include platelet activation and hypoxia-inducible transcription factors (HIFs) mediated or HIF-independent increase in procoagulant factors or reduction of coagulation inhibitors [28]. Hypoxia can also induce PAI-1 in a time-dependent process; by enhancing TF and repressing tissue factor pathway inhibitor (TFPI) transcript expression [29], decreasing protein S levels and increasing thrombin generation, it contributes to the prothrombotic effect [30].
COPD patients are at heightened risk of VTE during acute exacerbations of COPD (AECOPD) [31][32], which may be due to clotting system activation [33]. AECOPDs, which are crucial events in the disease’s natural history, can concomitantly lead to hypoxia and amplification of systemic inflammation, thus magnifying the prothrombotic state [34]. Respiratory tract infections, the most frequent trigger of AECOPD, represent a transient risk factor for VTE [35]. In a population-based case-control study in Northern Denmark, the Incidence Rate Ratio (IRR) for VTE within the first 3 months after infection was 12.5 (95% CI: 11.3–13.9) for patients with hospital-diagnosed infection and 4.0 (95% CI: 3.8–4.1) for patients treated with antibiotics in the community, compared with individuals without infection during the year before VTE [36]. Immobilization is another factor, existent during AECOPD, which imposes an even greater risk for VTE [37][38].
Obstructive sleep apnea (OSA) is a frequently encountered comorbidity among COPD patients. The estimated prevalence of sleep disturbance in COPD varies from 34% to 78% [39][40]. OSA further magnifies the risk of VTE through hypoxia, systemic inflammation, endothelial damage, and connection to metabolic syndrome [41][42]. Xie et al., demonstrated that patients with COPD and OSA had higher odds of PE compared to control patients (individuals without OSA or COPD), with significance persisting after adjusting for covariates (OR 5.66; 95%CI 1.80–16.18, p = 0.004). Interestingly, patients with COPD and OSA had significantly higher odds of PE compared with those with isolated OSA in adjusted models (OR 3.89; 95%CI 1.27–10.68, p = 0.019) [43].
Altered coagulation mechanisms in COPD affect danger for cardiovascular events as well; there is evidence linking coagulation and risk of cardiovascular disease, including the presence of several coagulation factors within the atherosclerotic lesions [44]; animal studies indicating accelerated atherosclerosis in animals with a hypercoagulable genotype [45]; associations between hypercoagulability-related hemostatic gene variants and cardiovascular disease [46]; and associations of elevated hemostatic factor levels with arterial thrombosis, cardiovascular disease stemmed from the presence of coagulation factors in atherosclerotic lesions [44].

2. An Overview of the Coagulation Mechanism

The progress of coagulation can be generally divided into the following stages: initiation, amplification, propagation, and stabilization [47]. The mechanism of hemostasis is an intricate process which is generated through a series of clotting factors. The coagulation cascade of secondary hemostasis has two initial pathways which lead to fibrin formation and the intrinsic and the extrinsic pathway. The intrinsic pathway consists of factors I (fibrinogen), II (prothrombin), IX, X, XI, and XII. The extrinsic pathway involves factors I, II, VII, and X. The common pathway comprises factors I, II, V, VIII, X. The two pathways are a series of reactions in which coagulation factors that circulate as zymogens (inactive enzyme precursor) of a serine protease and its glycoprotein co-factors, are activated to become active components which then catalyze the next reaction in the cascade, ultimately resulting in activation of fibrinogen and formation of cross-linked fibrin. Factors II, VII, IX, X, XI and XII are serine proteases, whereas factors V, VIII are glycoproteins, and XIII is a transglutaminase. Fibrinogen, factors II, V, VII, VIII, IX, X, XI, XIII, and protein C and S are synthesized by the liver, while factor VII is created by the vascular endothelium [48].
A summary of the coagulation cascade is presented in Figure 1. 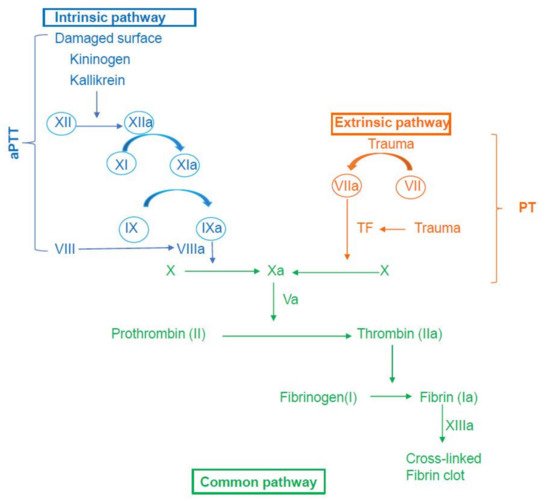 To the best of our knowledge, this is the first comprehensive review of studies on hypercoagulability either in stable COPD or during COPD exacerbations. A large body of epidemiological data supports the hypothesis that COPD is closely linked to a hypercoagulable state. Overall, patients with stable COPD exhibit major alterations of fibrinogen, FII, FV, FVII, FVIII, FIX, D-dimers, von Willebrand factor Ag, von Willebrand factor Ac, TF, TAT, FPA, β-thromboglobulin, tPA-PAI, prothrombin fragment 1 and 2, and maximum thrombin levels, pointing to hypercoagulability. Prothrombotic state is further enhanced during exacerbations, reflected by a significant increase of TF, TAT, soluble fibrin complex, fibrinogen, D-dimers, and APC-PCI. This summary provides an in‐depth overview on the alterations of coagulation factors and prothrombotic changes in COPD patients that enhance our understanding of the coexistence of cardiovascular comorbidities in these patients.