Glioblastoma is a highly lethal adult brain tumor with no effective treatments.

1. Pathological and Genetic Features of Glioblastoma

Glioblastoma (also called GBM) is the most common malignant primary brain tumor originating from glial cells [1]. Of the three types of gliomas (ependymomas, oligodendrogliomas, and astrocytomas), glioblastomas are WHO grade IV astrocytomas and have the worst prognosis. GBMs cause 225,000 deaths per year worldwide, and are diagnosed at an average age of 64 [2]. The median survival rate for GBM is 15 months from initial diagnosis even with the most current standard-of-care therapy, which consists of maximal surgical resection, radiation therapy, and adjuvant chemotherapy with temozolomide [3]. There are several obstacles to the development of efficient treatments against glioblastoma. Surgical resection of GBM is virtually impossible as these tumors are highly invasive and penetrate the normal brain. Full resection would require very fine tuned and precise imaging tools, which would enable the removal of invading tumor cells. GBM is highly resistant to cytotoxic drug regimens, including temozolomide, which only improves overall survival 2.5 months beyond radiation and surgery alone [4]. Therefore, new strategies are necessary to develop treatments that elicit durable responses in GBM patients.
Various rodent models have been developed for the accurate representation of preclinical GBM models, but those systems have multiple drawbacks such as immune system deficiency and incompatible stroma and microenvironment that might interfere with the testing new drugs [5]. Existing animal models fall under three categories. The first involves genetically engineered mouse models: for example, mice expressing v-src kinase driven by an astrocyte-specific Glial Fibrillary Acidic Protein (GFAP) promoter or tp53-null mice with astrocyte-specific loss of NF1 both develop high-grade astrocytomas [6][7]. Mouse models of glioblastoma have also been generated using viruses expressing oncogenes injected into the mouse brain. For example, Pax3-Tv-a; Trp53 fl/fl mice injected with RCAS-PDGFB and RCAS-Cre virus, with or without RCAS-H3.3K27M, develop a tumor similar to diffuse pontine glioma [8]. A more recent technical development is the injection of patient-derived glioblastoma stem-like cells in immunocompromised mice. While many laboratories have adopted this technique for studying glioblastoma in vivo, two recent examples include injecting cells derived from isocitrate dehydrogenase 1 (IDH1)-mutant tumors into SCID (Severe Combined Immunodeficiency) mice to study vulnerability of this tumor genotype to 2-hydroxyglutarate depletion [9], and injecting cells from recurrent glioblastoma into NOD-SCID (Non-Obese Diabetic SCID) and NOG (NOD/Shi-scid/IL-2Rγnull) mice then treating them with a STAT3 (Signal Transducer and Activator of Transcription 3) inhibitor [10]. These animal models have led to many novel discoveries in glioma cell biology and metabolism, but thus far have not led to any new clinical advances.
Our most promising avenues for developing robust strategies to target GBM are likely to lie within recent efforts to genomically and proteomically catalog this disease. Indeed, a study published by The Cancer Genome Atlas (TCGA) Research Network in 2014 showed that the most frequently altered pathways in GBM are the RTK/PI3K/MAPK (90% of tumors), p53 (86%), and Rb pathways (79%) [11]. Because nearly all glioblastomas have at least one genomic alteration in the RTK/PI3K/MAPK axis, and because there are numerous small molecule inhibitors targeting this pathway that are already FDA-approved or at least in early-stage clinical trials, it appears inhibition of RTKs, PI3Ks, or MAPKs should be highly effective. Unfortunately, no RTK, PI3K, or MAPK pathway inhibitor thus far has improved patient survival beyond that of the current standard-of-care [4][12][13]. That said, the TCGA datasets have provided a trove of mutations, gene expression and proteomic profiles, and copy number variations that can be explored for novel therapeutic targets.

2. Cholesterol Metabolism in the Liver vs. Brain

The liver plays an important role in cholesterol metabolism. In contrast with brain, hepatic cholesterol can be obtained from the diet. Dietary cholesterol is obtained by intestinal epithelial cells via endocytosis. Cholesterol can then be esterified and loaded into nascent chylomicrons together with triacylglycerol. The chylomicrons are released from intestinal cells into the circulation by the lymphatics [14]. Triacylglycerol in the chylomicrons is hydrolyzed by lipoprotein lipase in blood vessels, and the cholesterol left behind in the chylomicron remnants are taken up and utilized by the liver [14][15]. The cholesterol from liver and dietary origins can be packed into particles of very low-density lipoproteins (VLDLs), which leave the liver and transport cholesterol to other tissues [16]. Another difference between liver and brain cholesterol metabolism is that cholesterol can be recycled through enterohepatic circulation, which does not exist in the brain (Figure 1). Cholesterol can be oxidized in the liver to form bile acids which along with cholesterol is excreted from the liver into the bile [17][18]. The excretion of bile acid involves ABCB11 [19]. Only about 5% of bile acids are lost in the feces, and the rest are reabsorbed into enterocytes. Bile acid is important for the digestion and absorption of dietary fats.

The brain has different ways to satisfy the requirements of cholesterol compared to peripheral organs. An epidemiological study investigated the relationship between dietary intake of cholesterol and the incidence of cancer, and found that high dietary cholesterol levels increase the risk of several cancers including stomach, colon, rectum, pancreas, lung, breast, kidney, bladder, and non-Hodgkin’s lymphomas, but not brain tumors [20]. This result is not surprising: since cholesterol cannot pass the BBB, high plasma cholesterol levels are unlikely to affect cholesterol metabolism in the brain [20].
The brain obtains cholesterol primarily through de novo synthesis, which involves the mevalonate and Bloch and Kandutsch-Russell pathways [21][22][23]. Taking advantage of the Glioblastoma Bio Discovery Portal [24], our group found a correlation between upregulation of mevalonate and cholesterol pathway and poor survival of GBM patients [25]. Mechanistic studies demonstrated that densely-plated glioma cells increase the synthesis of cholesterol by enhancing oxygen consumption, glycolysis and the pentose phosphate pathway, and pharmacological inhibitors acting downstream of the mevalonate pathway induce glioma cell death [25]. Moreover, the study from our group also found that densely plated normal astrocytes but not tumor sphere glioma cells downregulate genes in the cholesterol biosynthetic pathway including farnesyl diphosphate synthase, farnesyl-diphosphate farnesyltransferase 1, and squalene epoxidase, (FDPS, FDFT1, and SQLE, Figure 2) [25]. A study conducted later by Kim et al. showed that inhibition of FDPS by pharmacological inhibitors and siRNA (small interfering RNA) prevents the formation of secondary spheres of glioma stem cells, and FDPS mRNA was associated with malignancy in glioblastoma patients [26]. In addition to mRNA and protein levels, Abate et al. demonstrate that the activity of FDPS is also upregulated in GBM tumor tissue [27]. 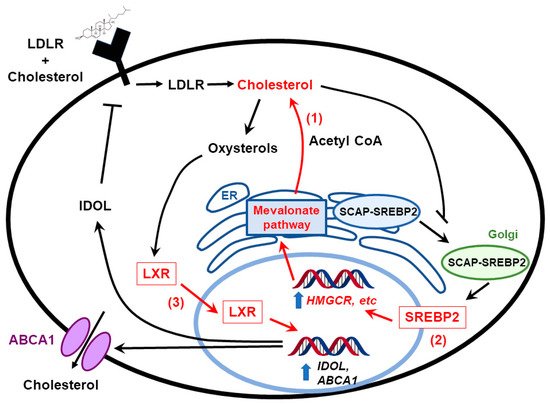 Figure 2. Cholesterol homeostasis in glioblastoma cells. Glioblastoma cells maintain cholesterol under conditions in which normal cells turn it off through multiple mechanisms of dysregulation (highlighted in red). They keep cholesterol biosynthesis on by constitutive activation of the mevalonate pathway (1), and by upregulating SREBPs under hypoxia (2). They are also highly dependent on appropriate levels of LXR activity—hyperactivating LXR with synthetic agonists overstimulates ABCA1 expression and cholesterol efflux, killing glioblastoma (GBM cells) (3). In sum, this provides them with cholesterol in an organ that is blocked from obtaining it from the circulation due to the blood-brain barrier.
Another study demonstrates that GBM is dependent proper cholesterol homeostasis for survival: instead of inhibiting the synthesis of cholesterol, Villa et al. tested the effect of LXRs on treating GBM [28]. LXR is a transcription factor that facilitates the efflux of cholesterol by increasing ABCA1 expression. Villa et al. showed that limiting cholesterol levels by treating cells with LXR agonists induced glioma cell death. In vivo experiments showed that LXR agonists inhibited GBM growth and prolonged the survival of mice [28]. As a key transcription factor in the regulation of sterol homeostasis, other groups have evaluated the effects of SREBPs on GBM development [29][30]. Lewis et al. showed that under hypoxia and serum-deprivation conditions, SREBP is upregulated to maintain the expression of fatty acid and cholesterol biosynthetic genes in GBM cells, and inhibiting SREBP activity under hypoxia led to GBM cell death [29]. These studies demonstrate that cholesterol metabolism pathways are upregulated in GBM patients and targeting cholesterol metabolism and/or homeostasis may be a promising strategy in treating GBM.

Cancer cells have an increased demand for cholesterol and cholesterol precursors. Therefore, a reasonable assumption is that prevention of tumor-cell growth can be achieved by restricting either cholesterol availability or cholesterol synthesis [31]. Loss of cholesterol feedback inhibition mechanisms that regulate cholesterol synthesis is an important feature of malignant transformation. The cholesterol synthesis pathway has numerous proteins that are potential targets to disrupt cancer progression [32]. The therapeutic potential of targeting these cholesterol synthesis genes is under preclinical investigation [33][34]. The unique metabolic requirements of the brain might make glioblastoma particularly suitable for cholesterol pathway targeting [25].
Liver X-receptors (LXRs) act as transcriptional master switches that coordinate the regulation of genes such as ABCA1 and ABCG1, which are involved in cellular cholesterol homeostasis [35][36] LXR-623 is a synthetic ligand for LXRα and β that upregulates ABCA1 and ABCG1 expression in blood cells [37]. In a study published by the Mischel lab, LXR-623 killed GBM cell lines in an LXR β- and cholesterol-dependent fashion but not healthy brain cells. Upon further investigation of LXR-623, the group found that the drug penetrated the blood–brain barrier and retained its anticancer activity. In addition, mice harboring GBM tumors derived from human patients and treated with LXR-623 had substantially reduced tumor size and improved survival [28].
Statins are HMG-CoA reductase inhibitors that have anti-tumor effects and synergize with certain chemotherapeutic agents to decrease tumor development [34][38]. Several clinical trials have examined the potential chemo-preventive and therapeutic efficacy of different formulations of statins, including simvastatin, pitavastatin, and lovastatin [39][40][41][42][43]. For example, a short-term biomarker study showed lowered breast cancer recurrence in simvastatin-treated patients through the reduction of serum estrone sulfate levels [44]. Moreover, pitavastatin reduces GBM tumor burden in xenografts [40]. Bisphosphonates and tocotrienols are another class of drugs which act as downstream inhibitors of the cholesterol synthesis pathway. Early investigations have shown that they can slow down cancer cell and tumor growth similar to statins [45].
Protein geranylgeranylation, a branch of the cholesterol synthesis pathway, was also found to be essential for maintaining stemness of basal breast cancer cells and to promote human glioma cell growth. GGTI-288, an inhibitor of the geranylgeranyl transferase I (GGTI) reduced the cancer stem cell subpopulation in primary breast cancer xenografts [33][46]. Moreover, high dependency of malignant glioma cells on the isoprenoid pathway for post translational modification of intracellular signaling molecules make this pathway a potential candidate for drug targeting. Recent work published by Ciaglia et al. shows antitumor activity of N6-isopentenyladenosine (iPA) on glioma cells. Its mechanism of action is primarily driven through AMPK-dependent epidermal growth factor receptor (EGFR) degradation, which further adds value to its candidacy as a potent antitumor drug [47][48]. Thus, multiple preclinical studies demonstrate that targeting the cholesterol synthesis pathway could be useful for modulating cancer growth, either through directly inhibiting cholesterol synthesis, or though inhibiting the production of mevalonate pathway-derived moieties used in protein post-translational modifications of oncogenes.