Each urban development initiative affects not only those who invest or occupy buildings in the city but also a wider community who live and work nearby, or simply pass through or visit the area on a regular basis [1]. Therefore, it is the right of all of the affected parties, including local residents and businesses, to be actively involved in shaping the developments to reap the benefits equitably without adverse effects on anyone [2][3][4][5][6][7]. In order to address complex urban challenges and to respond to the uncertainties in urban development, a wide range of knowledge and resources is needed from multiple fields; local communities should, therefore, participate as a key stakeholder [8]. Unfortunately, in most cases, the local community is considered as inhabitants, rather than bringing them forward as an active participant in the urban planning. This poses a challenge for the achievement of equitable and sustainable developments as, generally, only governmental strategies are preferentially considered by the decision-makers. The factors that cause the exclusion of communities include their lower capacity and understanding. Communities are unwilling to participate in government-led projects due to public cynicism and distrust in the local authority processes [9]. This is further exacerbated by a range of other factors, such as the low investment for infrastructure and planning required for community engagement exercises, strictly determined top-down procedures, the lack of a participatory culture within practitioners, and their insufficient knowledge and understanding of participatory practices [9]. Therefore, there is a serious concern that the targets set by the United Nations’ Sustainable Development Goals, such as Goal 10 (Reduce inequality within and among countries) and Goal 11 (Make cities and human settlements inclusive, safe, resilient and sustainable), and the priorities set by the Sendai Framework for Disaster Risk Reduction 2015–2030 may not be effectively achieved [10][11].

In this regard, there is an urgent need for governments to introduce and enforce processes that build trust within communities and allow citizens, including vulnerable groups, to participate in development planning and policymaking [12][13]. In order to achieve inclusivity in urban planning, industry practitioners (including planners) should have a proper understanding of the available participatory approaches and the true purpose of involving the public during the lifecycle of an urban development project. Partitioners need to strategically select participatory methods that suit the intended outcome of involving local communities in the different phases of urban development, from the pre-design analysis (conceptual design) to the post-development stage.

2. Nexus of Community Engagement with the Urban Development Process

Community engagement is a “purposeful process which develops a working relationship between communities, community organisations and public and private bodies to help them to identify and act on community needs and ambitions” [9] (as cited in the Scottish Community Development Centre, 2015). Academic researchers from diverse disciplines have produced different models for community engagement in order to widen the public and private sectors’ understanding of public participation. In 1969, Arnstein devised a ladder of citizen participation based on the distribution of power between governments and citizens [14]. The ladder consists of eight rungs under three levels of public participation: (1) the first two rungs, namely manipulation and therapy, represent nonparticipation or no power; (2) the next three rungs of informing, consultation and placation represent tokenism; (3) the last three rungs of partnership, delegated power and citizen control represent citizen power. Later, Glass [15] defined five stages of public participation in the form of objectives to be achieved in successful community engagement activity. These are information exchange, education, support building, supplemental decision-making and representational input. As mentioned in [16], the Sunderland Community Development Plan (2008) identified another way of thinking about different levels of involvement, namely: consultation (being informed, consultation, being asked); engagement (commenting on decisions, engagement for developing solutions); and partnership (delivering services).

In 2000, the International Association for Public Participation (IAP2) coined the spectrum of community engagement, which has been modified by researchers over the years but which still remains the most up-to-date and valid model for public participation. This framework consists of five levels of citizen engagement: (1) inform; (2) consult; (3) involve; (4) collaborate; and (5) empower, or citizen-led decision-making [17]. Each of these engagement levels has its purpose. Thus, the implementation of all of these degrees of engagement within a single development project is not recommended anywhere, as each of these levels has a unique role in community engagement that needs to be carefully chosen depending on the project requirements and the context.
Depending on the community groups and representatives involved in the planning phases, different involvement models can be distinguished. Accordingly, [14] (as cited in Sturm, 2013) presents a hierarchy of intensity of participation, ranging from the dissemination of information to interaction and real decision-making, particularly for urban mobility planning. The above discussion on the theoretical transformation of the community engagement concept is summarised in Figure 1.

3. Mapping of Participatory Methods into the Spectrum of Community Engagement 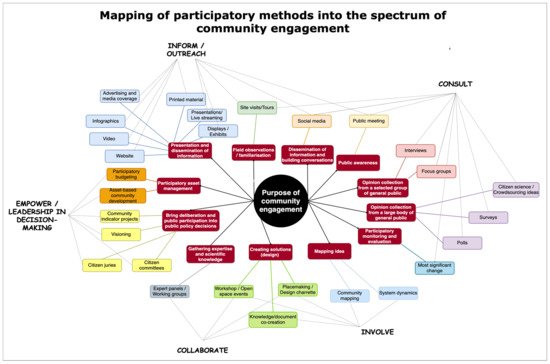 Figure 3. Mapping of participatory methods into the spectrum of community engagement (source: the authors).
The ‘inform’ level of public participation does not provide the opportunity for public participation at all, but provides the public with the information they need to understand the decisions made by agencies [17]. However, the inform level reminds project implementors and decision-making agencies that they should serve as honest brokers of information. At this level, they should at the least give the public what they need to fully understand the project and decision(s), and to reach their conclusions as to the appropriateness and adequacy of the decision(s).
The ‘consult’ level of public participation provides the basic minimum opportunity for bringing public input into a decision. In terms of development, consultation is particularly appropriate when there is little complexity in an issue, and it can be useful for obtaining feedback about a draft plan or for canvassing a range of views early on in a longer planning process (although not necessarily acting on them). Consultation with little interaction can be achieved through surveys, interviews and polls. A survey or an interview helps to understand the opinions of stakeholders on a particular topic in a structured way which can be extensively analysed. Polls, as a voting method, allow people to register their opinion and thus to quickly provide an assessment of a current situation [18]. A simple vote on an urban development plan will give the respective authorities an idea of the level of local awareness and support for an issue, and can open up the way for other engagement strategies.
At the ‘involve’ level, the public is invited into the decision-making process, typically from the beginning, and are offered multiple ongoing opportunities to provide input into the decision-making process as the development solutions mature over time. However, the respective agencies are still the decision-makers, and there is no expectation of building consensus or offering the public any sort of high-level influence over the decision [17]. This approach typically considers both community requirements and perspectives with government requirements in order to generate alternative design proposals. In this approach, there is a need to update communities throughout a development process until the final design is reached.
The ‘collaborate’ level in the engagement spectrum aims to partner with the public in each aspect of a decision, including the development of alternatives and the identification of the preferred solution. The collaboration level promises to incorporate advice and recommendations from the public to the maximum extent possible, but decision-making still lies with the development-related organisations.
As the foregoing discussion elaborates, the first four levels of the community engagement spectrum range from no participation to interactive participation but do not provide an avenue for community-led decision-making. At the top level of community engagement, the ‘empower’ level places the final decision-making in the hands of the public. Community leadership in decision-making in urban development is purposeful when there is a need to bring deliberation into policy formation in order to understand and incorporate ground-level data. This can be achieved by implementing participative empowerment methods such as citizen committees, citizen juries, visioning and community indicator projects. Citizen committees (also known as public advisory committees and public liaison committees) consist of a group of representatives from a particular community or a set of interests who are appointed to provide comments and advice on an issue.

4. Suggested Model for the Selection of Participatory Methods

Although a participatory approach to development encourages multi-stakeholder involvement in all of the stages of development, it is evident that community engagement is mostly limited to the inform and consult levels in urban planning, completely overlooking most of the other phases of the development cycle. The key challenges for, and barriers to, a more comprehensive community engagement in risk-sensitive urban design were identified by the authors and published in [9]. Some of the key barriers identified were a lack of understanding of community engagement tools and techniques for specific circumstances, the lack of fair representation from communities, a lack of participation mechanisms to achieve consensus in an efficient manner, a lack of technology for supporting effective community participation, and a lack of communication channels between decision-makers and communities [9]. In order to provide clear guidance on these choices, Figure 4, below, presents an onion model for the selection of the participatory methods for each phase of urban development, as derived from the outcomes of the systematic review and the case-based knowledge developed in this study. This onion model aims to provide a guide for the selection of participatory methods for different stages of urban development in order to help industry practitioners to implement effective community-engagement exercises for inclusive developments. 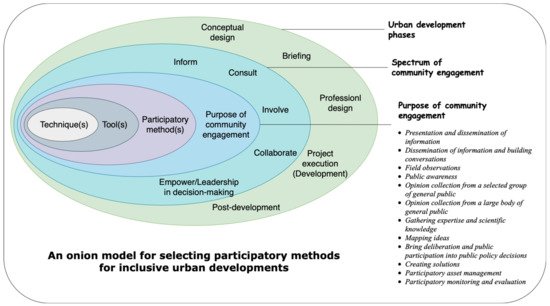