Bio-inspired or biomimetic design of biomaterials presents new possibilities for developing implantable devices with enhanced biocompatibility and novel functions [1][2][3][4][5][6][7][8]. No study has yet reported a potential application of biomimetic surface morphology, particularly at the nano-level, to endosseous implants for commercial use in the fields of dental and orthopedic surgery [9][10][11][12][13][14][15][16][17][18][19][20]. Most of the advancements thus far in implant surface design to improve their ability to integrate with bone can be characterized as development of micro-topography to enhance osteoblastic function [21][22][23][24][25][26][27][28][29][30][31][32]. Specifically, micro-scale roughness, ranging from 0.5 μm to 5 μm, made by various chemical and physical treatments has been shown to successfully promote osteoblastic differentiation, thereby leading to faster and firmer bone integration than a machined-smooth surface [22][23][25][28][30][31]. A major challenge remains unsolved with respect to how distinct meso- (10 to 500 μm) and nano-scale surface topography can be created, and more importantly, the osteoblastic reaction to these scales of morphology/roughness is largely untested. Establishing a technological platform and accompanying design strategy on an experimental yet scalable manufacturing level would provide an initial solution for these important outstanding questions in the field.
A recent laser technology advancement made a breakthrough in simultaneous creation of meso- and nano-scale topography on zirconia [20]. Zirconia, made with yttria-stabilized tetragonal zirconia polycrystal (Y-TZP), is an allergy-free implantable material which is biocompatible with bone [20][33]. Optimizing conditions for the solid-state laser etching has enabled the engraving of meso-scale grooves with unique nanostructures upraised from their surfaces [20]. It was demonstrated that the width and depth of these meso-scale grooves can be controlled. The next step is to harness the technology for a novel surface design to further improve cellular and tissue reaction. For application to dental and orthopedic implants, a specific goal is to enhance bone–implant integration. A possible strategy from a mechanical perspective is to effectively increase the surface area of the implant and also the mechanical interlocking between the implant and bone, and we hypothesized that meso-scale texture holds a key to accomplishing this strategy. From a biological perspective, we hypothesized that the simultaneous presence of optimized meso-scale and nano-scale textures would promote osteoblastic differentiation, and furthermore, that if the nano-texture could create a bio-inspired local environment, it would be even more effective.

We attempted to create zirconia surfaces with cactus-like meso-scale spikes and nano-scale architecture using crisscrossing solid-state laser etching, as illustrated in Figure 1. The meso-scale spikes were designed with 60 μm width and five different heights of 20, 30, 40, 60, and 80 μm. Zirconia experimental samples in cylindrical and disk forms were made from yttria-stabilized tetragonal zirconia polycrystal (Y-TZP) (Figure 2A). The zirconia samples roughened through laser etching appeared to reflect less light than polished-smooth zirconia. Figure 2B (top images) shows low-magnification SEM images of zirconia cylinders with different meso-spike heights created by laser etching as well as the polished-smooth zirconia without laser etching. Laser-etched zirconia samples exhibited uniform, even, and seamless formation of spikes all over their circumference, regardless of the spike height. High-magnification images of these zirconia cylinders vividly revealed the formation of cactus-like spikes with consistent size and height, and in perfect lattice alignment (bottom images in Figure 2B). By controlling laser conditions, meso-scale spikes of gradually increased height were successfully created, while the width was fixed to approximately 60 μm. Even higher-magnification images revealed the formation of randomly shaped, densely networked nanostructures all over the surfaces of spikes of all heights; the nano-architecture resembled trabecular bone (Figure 2C). The trabeculae-like structures were 100 to 400 nm in size and appeared assembled and upraised from the base zirconia.

Figure 1. Schematic illustration of design strategy used to create cactus-inspired meso-scale spikes. Crisscrossing lattice grooves are engraved by vertical and horizontal laser etching. The grooves are hemispherical, leaving unengraved areas projecting as spikes. The width and depth of the grooves are controllable; the width was fixed at 60 μm in the present study, while the depth was varied in 5 increments from 20 to 80 μm. 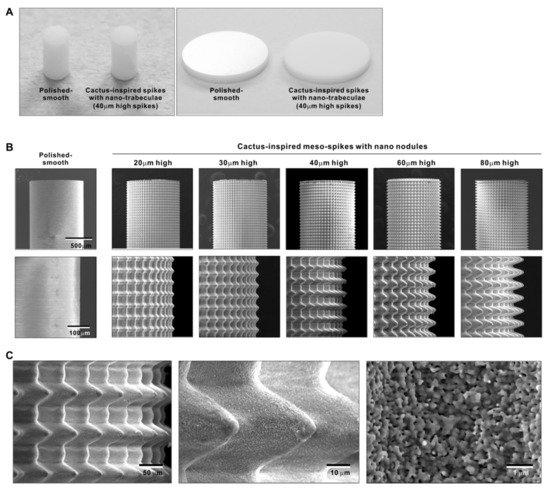 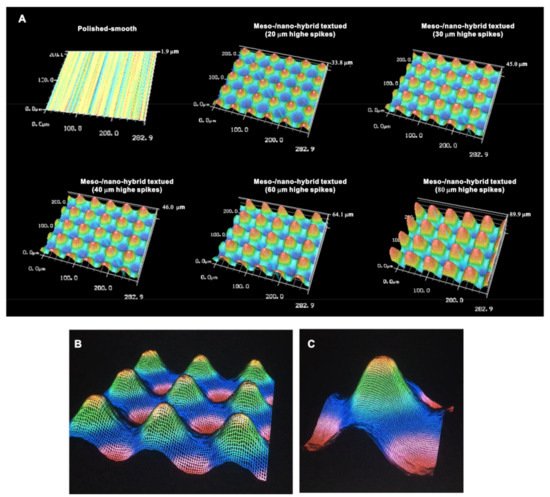 Figure 3. Three-dimensional profiles of the bio-inspired meso- and nano-scale hybrid textured zirconia. (A) Three-dimensional images of the polished zirconia and the meso- and nano-scale textured zirconia with various heights of meso-spikes. (B,C) Close-up images of the 40 μm-high meso-spikes, depicting precise and smooth transitions from peaks to valleys.
Cross-sectional profiling along the line connecting spike peaks confirmed smooth, oscillating curves of spikes and valleys (Figure 4A). The width of a spike was stable at approximately 60 μm for all height variations. The heights of spikes measured by profiling and the average peak-to-valley roughness (Sz) nearly matched the anticipated heights, with the measured heights of 23.1, 32.3, 42.5, 62.5, and 85.5 μm for the anticipated heights of 20, 30, 40, 60, and 80 μm, respectively (Figure 4A,B). There was a very high correlation between the measured spike height (Sz) and the anticipated height (R2 = 0.9975; Figure 4B). The coefficient of variation for Sz was less than 1.5% for 30, 40, 60, and 80 μm-high spikes and near 1.0% for 40 and 60 μm-high spikes (Figure 4C). These data indicate the precision and reproducibility of the surface texturing process. Sz, average roughness (Sa), and surface area increased dramatically with the addition of meso-spikes and further increased in proportion to the incremental height increase of the meso-spikes (Figure 4D). Of significance, Sa exceeded 5.0 μm when the spike height was 30 μm or higher, followed by a further increase to over 15 μm. The surface areas of samples with 20, 30, and 40 μm-high spikes were more than twice that of the polished surface and increased to 4.43 times that of the polished surface with 80 μm-high spikes. 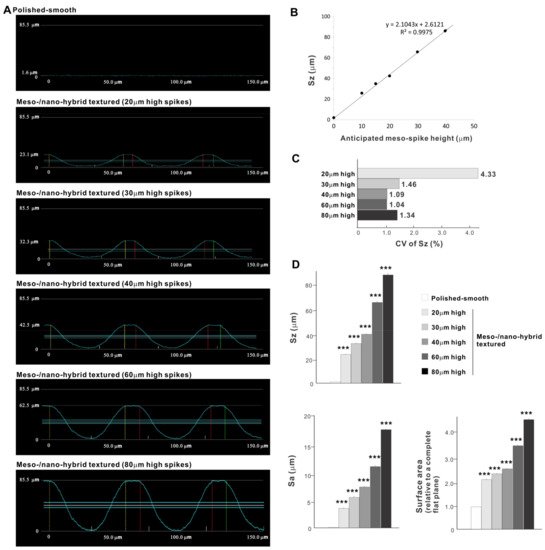 Figure 5. Attachment of osteoblasts to differently textured zirconia surfaces during the initial stage of culture, evaluated by WST-1 assay on day 2. *** p < 0.001, statistically significant difference compared with a polished surface.
We then examined the ability of the zirconia samples to support cell proliferation by measuring the density of cells on day 5 of culture (Figure 6). The cell density on all hybrid-textured zirconia samples was significantly lower than on the polished surface. The difference between the polished surface and hybrid surfaces was diminished compared to the initial cell attachment evaluated on day 2. A decreasing trend was found on the hybrid surfaces with higher spikes, although there was no significant difference among the surfaces with 20, 30, 40, and 60 μm-high spikes.

We next examined osteoblastic differentiation by measuring ALP activity, matrix mineralization ability, and the expression levels of osteoblastic differentiation marker genes. Unlike the results in the cell attachment and cell density assays, the ALP activity measured on day 10 was significantly higher for all meso-/nano-scale hybrid textured zirconia than on the polished surface (histogram in Figure 7). There was a disproportional change of ALP activity relative to the spike height, with the ALP activity being the highest when the spikes were 40 μm high. The result of ALP staining of the culture confirmed these results (top images in Figure 7). The matrix calcium deposition measured on day 20 also dominated on the hybrid surfaces and seemed to increase linearly with the spike height up to a certain point, followed by a decline (Figure 8). Specifically, the peak of the calcium deposition was found with 40 μm-high spikes. 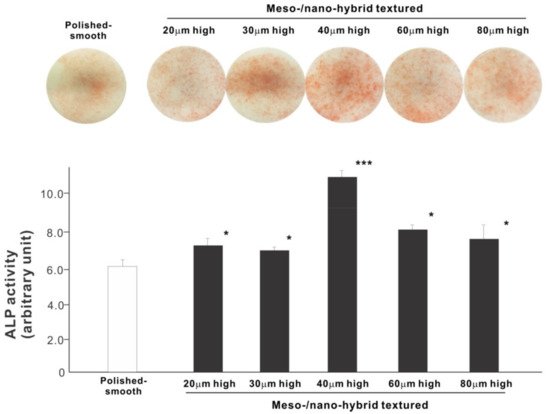 Figure 8. Osteoblastic differentiation on variously textured zirconia surfaces evaluated by matrix calcium deposition on day 15 of culture. * p < 0.05, ** p < 0.01, *** p < 0.001, statistically significant difference compared with a polished surface.
The results of real-time PCR resembled those of the matrix calcium deposition (Figure 9). The expression of collagen type 1 gene, an early-stage osteoblastic marker, was generally upregulated on the hybrid surfaces compared with the polished surface throughout the culture period. The expression level increased with the height of meso-spikes and was the highest with 40 μm-high spikes at all time points tested. The expression of osteocalcin, a late-stage osteoblastic marker, was significantly higher on the hybrid surfaces and most upregulated on the 40 μm-high spiked surface. 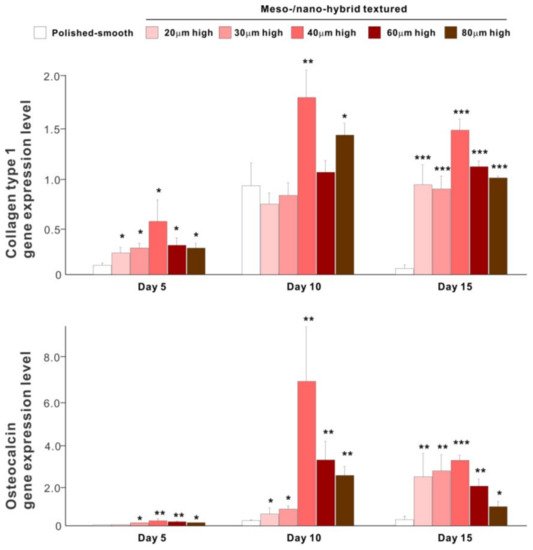 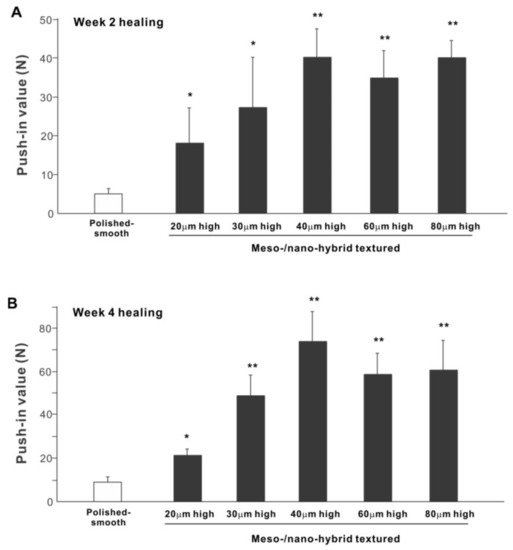 Figure 10. The biomechanical push-in test in the rat femur model at week 2 (A) and 4 (B) post-implantation. * p < 0.05, ** p < 0.01, statistically significant difference compared with a polished-smooth surface.
To verify the bone formation around zirconia implants, selected implants were examined for tissue morphology and chemistry after push-in testing (Figure 11). The hybrid-textured implants with 40 μm-high spikes were extensively covered with biological structures, as shown in the SEM image. The structures in the top half of the implant originated from the innate cortical bone and/or periosteum and spread to the implant surface, whereas the ones on the bottom half appeared to have stemmed from the implant interface within the bone marrow. The majority of the biological structures were positive for Ca and P signals in the elemental mapping, providing evidence that there was extensive bone formation around the implant. 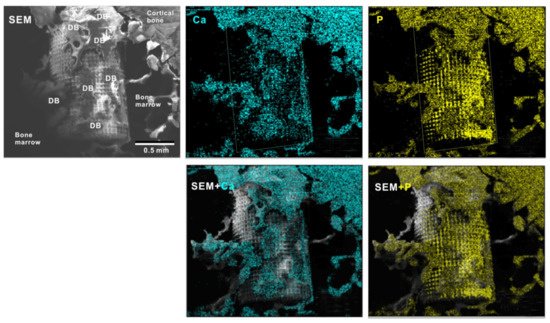 Figure 11. Peri-implant tissue morphology and chemistry around a zirconia implant. To verify bone formation around implants, selected implants were analyzed after the push-in test. A representative result from a meso-/nano-scale hybrid textured implant with 40 μm-high spikes is presented here. SEM images and elemental mapping for Ca and P signals as well as their superimposed images are shown.

To overcome potential challenges in creating the bio-inspired meso-/nano-scale hybrid textured zirconia surface on future medical devices, a prototype dental implant for human use was developed. The prototype, which was 4 mm in diameter and 10 mm in length, was screw-shaped with macroscopic helical threads to represent a size and shape standard for dental implants. Solid-state laser etching was applied to form 40 μm-high spikes as optimized in the experiments described above. Low-magnification SEM images depicted uniform and seamless formation of cactus-inspired meso-spikes all over the threaded implant surface (Figure 12A–C). There were no visible irregularities or defects in the spikes in any areas (i.e., peak, flank, and valley regions) of the macroscopic threads. The spikes created a controlled, oscillating configuration with a repetitive, peak-and-valley pattern. High-magnification images confirmed the formation of fully networked nano-trabeculae, just as seen on experimental samples, evenly and consistently appearing all over the implant surface (Figure 12D,E). 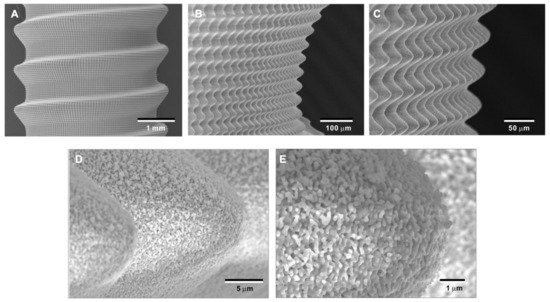 Figure 12. Prototype development of a medical device with the bio-inspired meso-/nano-scale hybrid textured surface for human applications. To verify the viability of the laser technology introduced here in creating medical devices, a zirconia dental implant was developed. A screw-shaped implant, made from Y-TZP, was formed to represent a standardly sized and shaped dental implant with macroscopic helical threads (A). After laser etching, the implant vividly presents cactus-inspired meso-spikes (B,C) and trabecular bone-like nano-scale interwoven architecture (D,E).