Closed ecological life support systems (CELSS) requires agricultural production for food, CO2removal, O2generation (human respiratory quotient ofCO2/[O2= 0.84–0.87 depending on the percentage formation of carbohydrate, fat and protein in the food consumed) and water recycling with bioreactors for recycling waste. Plants consume CO2and H2O for photosynthesis under the action of sufficient PAR to produce carbohydrate food, regenerate oxygen and filter water through evapotranspiration. There have been several bioregenerative life support system programmes including Biosphere 2 (US), CELSS (NASA), Bios-3 (Roscosmos) and its predecessors and MELiSSA (ESA).

On Earth, human life is supported by a complex and deep biosphere with material recycling including hydrological and biogeochemical processes through the lithosphere, hydrosphere, cryosphere, atmosphere and biosphere. The key features of natural ecosystems are bio-material turnover and energy flows [1]. They are closed to matter permitted by material recycling through biogeochemical (CNPSK) cycles but open to energy from the Sun. Buckminster Fuller characterised the Earth’s biosphere as spaceship Earth in his Operating Manual for Spaceship Earth (1968). Artificial life support systems generally lack the large buffering capacity of the Earth ’s biosphere so they require much higher degrees of precision control.

Biosphere 2 was a 12,700 m 2 glass biospheric enclosure sealed with silicone sealant in the Arizona desert housing a crew of 8 people for two years (1991–1993) with effectively 100% material closure [2]. Energy was input to Biosphere 2 as solar energy and electric generators supplying 700 kW (average) to 1500 kW (peak). The biosphere included 7 modules of 1900 m 2 tropical rainforest, 1300 m 2 savanna, 1400 m 2 desert, 450 m 2 tidal (freshwater and saltwater) marshes, 850 m 2 ocean, 2500 m 2 agricultural system and a 2400 m 2 human habitat. The habitat comprised a galley, living quarters, an analytic laboratory, computing facilities, machine shop and sickbay facilities. A system of cooling water towers, chilled water and a water boiler-controlled Biosphere 2′s air temperature [3]. Biosphere 2 incorporated 6 × 10 6 litres of water including fish/rice paddies and hosted 3800 different species including three domestic animals (pigmy goat, feral swine and chicken) which consumed inedible crop residue and worms in return for milk, eggs and tilapia meat. Waste was processed through composting and bacterial processing. Food production consumed the majority of the crew’s time. The facility incorporated two large expansion chambers (“lungs”) to accommodate temperature variations to ensure low gas leakage rates ~10%/year [4]. The most challenging issues were O 2/CO 2 level fluctuations which required periodic intervention and the calorie-restricted diet imposed on the crew. Obviously, the scale of Biosphere 2 renders it impractical for space application (except perhaps O’Neill colonies [5]). Nevertheless, experiments to date suggest that 100% closure is feasible for up to 6 months but the precise means to achieve this has yet to be demonstrated.

A human being requires 38.5 kg of consumables per day including 24.8 kg of water for showering, toilet flushing, cleaning and clothes washing per day including tankage. Water is the primary human consumption requirement—it is the main constituent of electrolytes of the human body (blood plasma, interstitial fluid and intracellular fluid) regulated by the kidneys through urine production [7]. Grey water is readily recycled so 13.7 kg of water consumables per day is more realistic. Recycling of water and oxygen may be implemented through physicochemical processes, the two components that can be readily sourced and supplied from lunar resources. Water at 5.6 ± 2.9% concentration (plus associated vapours of H 2S, ethylene, CO 2 and methanol) was detected by the LCROSS (lunar crater observation and sensing satellite) mission (2009) in an ejecta plume generated by a Centaur rocket stage impacting into the Cabeus crater [8] ( Table 1 ). However, there are considerably greater resources in lunar regolith minerals which may be extracted through a handful of processes ( Figure 1 ). The closed loop lunar industrial ecology system (CLIES) extracts other resources from lunar minerals and impacted asteroidal material [9]. Industrial ecology is an approach to organising industrial chemical processors such that the waste of one process becomes feedstock for another , i.e., recycling to minimize waste. CLIES presents an interlocking set of closed recycling loops that extract ceramics and ultimately metals from common rock-forming lunar minerals. Some of these metals might be exploited as input supplies to CELSS beyond water/oxygen. Scarce lunar volatiles may also be extracted but should serve only as recycled reagents so they are not consumed but their scarcity renders them untenable as a source of CNPS in CELSS. Similarly, CLIES does not exploit lunar volatiles for consumption. One notable exception was the carbon resources—this was proposed to manufacture silicone (siloxane) products as elastomeric electrical insulation plastic for wiring harnesses and silicone oils for lubrication [10] but we have re-addressed this issue and concluded that silicone is unnecessary as glass cloth and porcelain may be substituted for this purpose [11] and tungsten disulphide (WS 2) is a high temperature lubricant used in place of molybdenum disulphide (MoS 2) which may substitute for silicone oils. Hence, all extracted volatiles are recycled with CLIES. The implication is that, although H 2O resources can be replenished from lunar resources, CNPS elements cannot be supplied from lunar volatile sources but must be recycled within CELSS. However, CLIES can supply a limited set of resources for input to CELSS but the majority of nutrients including most metal micro-nutrients specified later must be recycled within CELSS. Water and oxygen supplies are available on the Moon but current proposals for mining local water ice are focused on its use as cryogenic propellant/oxidiser. We proffer a view that extraction and consumption of water consumables for burning as propellant/oxidiser wastes finite and valuable resources which would otherwise support human survival on the Moon over future generations. 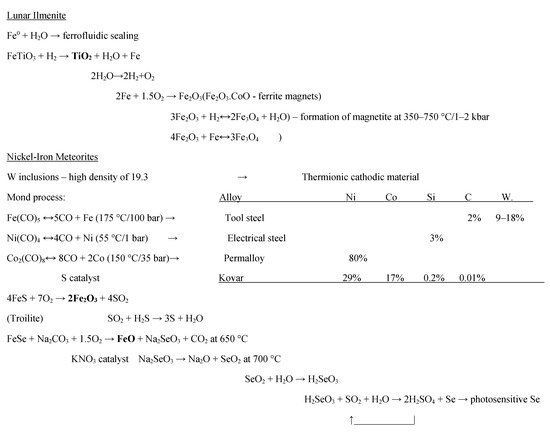 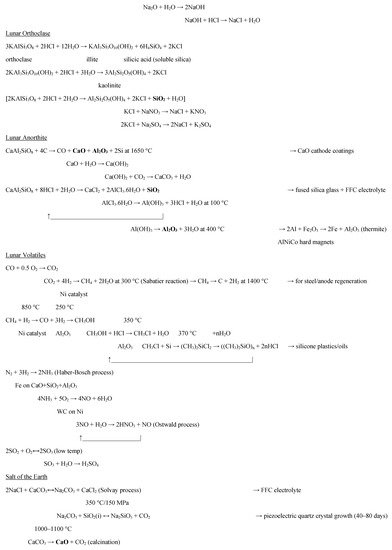 Material closure and openness to energy flow fundamental facets of any closed loop biospheric ecology with the latter driving it to far-from-equilibrium conditions [13]. So, it is with life support systems—material closure (with the exception of water/oxygen) will be essential. However, closed loop food production and nutrient recovery from waste can only be provided by biological processes employing living organisms in plant cultivation which is volume intensive. Closed biological regeneration involves the production of food, recycling of waste, recycling of water and air regeneration.

The carbon loop, due to the scarcity of carbon on the Moon, cannot be recycled through physicochemical processes but the bioregenerative recycling loop has a long time constant. An agricultural system requires an infrastructure to support the growth of higher plants including providing a nutrient supply to roots, the recovery of water of transpiration (20 litre/day/m 2) and provide a photosynthetically active radiation (PAR) lighting system [14][15]. Light may be supplied through solar collector mirrors to provide 0.5–1.0 kW/m 2 of full spectrum sunlight. Fresnel lenses may also be used as solar concentrators to transmit light energy through optical fibres and distributed in a controlled manner that is independent of direct sunlight. However, during the lunar night, artificial lighting is essential. PAR may be supplied by kW-output lamps—high-pressure sodium lamps or fluorescent xenon lamps have been superseded by LEDs but they are limited in their light intensities for some plants such as spinach, tomato and bell pepper. However, sulphur-microwave lamps offer bright visible light with a near-solar spectrum—it comprises a quartz envelope filled with small amounts of S and Ar ionised by microwaves with high efficiency. Exposure to sunlight is also essential for the production of vitamin D for human health which may require vitamin supplementation during the lunar night. There is other life support hardware required including heat-generating motors, pumps, fans, etc with recirculating hydroponic fluid loops in the case of hydroponic agriculture. Environmental parameters must be monitored reliably and controlled for optimal growth. A system of distributed sensors is required to monitor temperature, fluid pressure, fluid pH, conductive or thermal moisture and electrochemical dissolved oxygen levels, e.g., MELiSSA (micro-ecological life support system alternative) compartments measure temperature, pO 2 and solution pH. The implication is that such autonomous control must be robust to external perturbations, reliable without functional failure and stable to feedback time delays.

Closed ecological life support systems (CELSS) requires agricultural production for food, CO 2 removal, O 2 generation (human respiratory quotient of [CO 2]/[O 2] = 0.84–0.87 depending on the percentage formation of carbohydrate, fat and protein in the food consumed) and water recycling with bioreactors for recycling waste. Plants consume CO 2 and H 2O for photosynthesis under the action of sufficient PAR to produce carbohydrate food, regenerate oxygen and filter water through evapotranspiration. There have been several bioregenerative life support system programmes including Biosphere 2 (US), CELSS (NASA), Bios-3 (Roscosmos) and its predecessors and MELiSSA (ESA) [16]. CELSS require bioregenerative approaches which are characterised by significantly longer lags in recycling than physicochemical methods [17]. CELSS architectures are hierarchically modular, separating human habitation, plant cultivation, animal husbandry and microbial waste treatment which can be further subdivided [18]. They should be highly functionally redundant with multiple approaches to any specific function, i.e., there should always be physicochemical backup systems as far as possible [19]. A three-tiered architecture with planning–reactive-servo levels is considered suitable for controlling a complex life support system [20]. It is crucial to develop autonomous ecosystem control that includes mass and energy exchange measurements and models [16].

ESA’s MELiSSA is a microorganism-based artificial ecosystem centred in Barcelona Spain to create a closed loop bioregenerative system for space application including microbial recycling of human waste. It exploits microbial bioreactors in which bacteria, yeast and algae can recycle all the major biochemical elements and degrade complex organic molecules in waste into usable materials. Microbial bioreactors with bacteria fixed to a filter bed can also act as biofilters to filter air. They are well-suited to carbon recycling in closed life support systems, e.g., cellulase degrades cellulose into its components such as edible glucose. MELiSSA comprises five (of which four are microbial) interconnected functional bioreactor compartments inspired by aquatic ecosystems with closed loop fluid flow [23][24][25]: A multi-bacterial species anaerobic composter (including species from the complex human microbiome of which many bacterial strains resist culturing) that breaks down human and plant waste; it must also suppress methanogenesis (combusted methane imposes a loss of carbon and methane-consuming sulphate-reducing bacteria are sensitive to environmental conditions), e.g. , Fibrobacter succinogenes is an anaerobic thermophilic bacteria whose fermentation degrades plant waste into CO 2 and volatile fatty acids; Stirred tank bioreactor with photoheterotrophic anaerobic bacteria (purple non-sulphur bacteria Rhodobacteriaceae rubrum ) that absorbs fatty acid volatiles and converts them into edible biomass; Packed bed reactor with immobilised aerobic nitrifying bacteria (involving two bacterial steps by Nitrosomonas europaea from NH 4+ into NO 2− and Nitrobacter winogradsky from NO 2− into NO 3− that oxidises urea-produced ammonium NH 4+ into nitrate NO 3− in a culture medium; Gas-lift bioreactor with edible higher plant hydroponic system supplemented by edible cyanobacteria ( Arthrospira/Spirulina platensis ) in a culture medium for photosynthesis to generate food, purify water and recycle air; Human habitation compartment.