Endometriosis is an estrogen-dependent complex clinical syndrome characterized by the presence of ectopic endometrial-like tissue [1]. It is a pathological clinical condition that mainly affects women of reproductive age [1]. Various theories have been proposed to explain it: retrograde menstruation, the local immune alterations, imbalance between pro- and anti-angiogenic factors [1]. A multifactorial process is likely to occur in the etiopathogenesis of endometriosis. In women of reproductive age, it often causes infertility and chronic pelvic pain leading to severe functional limitations [2].
Another aspect of interest related to endometriosis is the risk of malignant transformation. A recent metanalysis showed that: (1) the risk of ovarian cancer doubles in patients with endometriosis; (2) conversely, the risk of endometrial and cervical cancer does not appear to be higher in these women [3]. Furthermore, when an endometriotic lesion turns into cancer, it appears to have a better prognosis. In a large metanalysis, endometriosis-associated ovarian cancers showed favorable characteristics, including early-stage disease, low-grade disease, and specific histology such as endometrioid or clear cell carcinoma [4].
After the reproductive period, endometriosis is thought to resolve or remain in a state of inactivity. Although the hypoestrogenic state related to menopause may suggest it, postmenopausal endometriosis can affect up to 4% of women [5]. Recurrences or malignant transformations are rare but possible events. Data on the risk of these occurrences are scarce and of low quality [5][6]. The most studied risk factors related to malignant transformation were hormone replacement therapy (HRT) and the use of tamoxifen for breast cancer [5][6]. However, the results were inconclusive. Moreover, the impact of previous endometriosis and related surgery is unclear. It is, therefore, necessary to raise awareness that endometriosis is not exclusively a condition of the reproductive phase.

Endometriosis is a pathological clinical condition that mainly affects women of reproductive age. However, about 2–4% of postmenopausal women have symptomatic endometriosis [5]. Furthermore, this prevalence may be underestimated as other authors report higher rates [7][8]. Given the absence of menstruation and the hypoestrogenic state, the onset of endometriosis in menopause would suggest other pathophysiological mechanisms than those of the reproductive age. In addition, we do not know whether the lesions found in older women are recurrent/persistent diseases or new implants. The matter is subject to a discussion without clear and definitive evidence. Bulun et al. showed that endometriotic lesions themselves could produce estrogens through autocrine and paracrine effects [9]. This could explain the persistence or recurrence of lesions in a hypoestrogenic state such as menopause [10]. Other sources of estrogen production could play a role in postmenopausal endometriosis: obesity, phytoestrogen intake, HRT use, tamoxifen therapy [5]. In these latter cases, quiescent endometriotic foci in menopause may be stimulated exogenously through the treatments mentioned above [5].
Although endometriosis is a benign condition, it presents a risk of malignant transformation. Overall, it is reported that about 1% of ovarian endometriosis can turn into cancer [11][12]. However, a prospective study including approximately 6500 women with ovarian endometrioma and a mean follow-up of around 13 years showed a standardized incidence ratio of malignant transformation of 8.95 [13]. Regarding this data, cases of malignant transformation are likely to be negligible in pelvic pain or infertility practice. There may be a selection bias in hospital studies that have oncologists on staff. Cancers can be more common in the hospital, and endometriosis with only pelvic pain or infertility in the surgery center. Interestingly, the period in which the risk of malignant transformation increased was the perimenopausal one with medians between 45–49 years [13][14][15], hence the importance of paying close attention to endometriotic ovarian cysts in perimenopausal women.
Malignant transformation of postmenopausal endometriotic lesions is a rare occurrence. To date, there are no defined percentages about its prevalence. The data are obtained from studies, including case reports and case series. In a detailed systematic review, Gemmell et al. reported 25 cases of postmenopausal malignant transformation in women using HRT with a previous history of endometriosis [6]. Most of the patients were in surgical menopause (22/25, 88%). They showed that most women used estrogen-only HRT (19/25, 76%) with a median duration of approximately seven years (range 3–20 years). The most frequent signs and symptoms at clinical presentation included abdominal/pelvic pain, vaginal bleeding, and the presence of palpable masses. Histology was endometrioid adenocarcinoma in 72% of cases, and most patients underwent surgical treatment followed by adjuvant therapy. Follow-up outcomes were generally favorable, with a 12% mortality rate over a mean observation period of 19.4 months. Tan et al. reported 62 cases of malignant transformation of endometriosis in menopause [5]. The mean age was 58.2 years; half of the women had used HRT (71% with unopposed estrogen therapy); the mean duration of HRT was ten years; most of the lesions had endometrioid adenocarcinoma histology (67.7%).
To our knowledge, the present systematic review provides the most extensive and updated data on the topic. Overall, our descriptive analysis is in line with the results described above. Some recurrent clinical conditions emerged: the previous history of endometriosis/adenomyosis, definitive surgery before menopause (hysterectomy with salpingo-oophorectomy), and estrogen-only HRT use. Follow-up outcomes showed a favorable survival rate (about 80%) over a mean observation period of 12 months (range 6.75–25 months).
Based on these data, previous authors speculated that postmenopausal women with endometriosis malignant transformation likely had a prior history of severe endometriosis that led to definitive surgical treatment before menopause. This occurrence would explain the high percentage of women on estrogen-only HRT taken for relatively long periods. However, our results showed that 55% (37/67) of women undergoing surgery had endometriosis as an indication for intervention. This means that in 36% of cases (21/58 women with endometriosis), the diagnosis of endometriosis was likely an incidental finding on the final histological examination. In this regard, it is likely that the diagnostic work-up of endometriosis, when performed by generalist gynecologists, may fail to recognize endometriotic lesions both preoperatively and intraoperatively. In an interesting paper, Griffiths et al. reported that rectovaginal endometriosis often goes unrecognized during the first surgery [16].
Major surgery in asymptomatic affected women or benign conditions is likely to have decreased over the years based on new and updated recommendations [1][2][17][18]. This, in turn, could explain the negative trend over time of previous endometriosis (positive personal history may be missing among asymptomatic women in the absence of a histologic diagnosis) and long-term HRT. Overtreatment could likely have been much more frequent in the past [17][18]. This new analysis suggests that the recurrence of some clinical conditions may be due to a different attitude of gynecologists about the use of major surgery in some pathologies in the past years.
Although the selected cases may not represent the true prevalence of the disease, the data is worthy of mention. Interestingly, our analysis showed that the number of instances of postmenopausal malignant transformation increased over time. Conversely, we know that other studies showed a negative trend over the years in the incidence of endometriotic disease [19][20]. Although these data may seem contradictory, these current occurrences may be those cases of asymptomatic endometriosis that occurred 20–30 earlier. We will have to wait for the next few years to evaluate the next trend. A further increase of such cases would underline how these recurrent clinical conditions do not have a causal role in malignant transformation.
Further findings are worthy of discussion. The age trend increased over the years, albeit not significantly. It appears that women managed in past years had an earlier age when cancer occurred (Figure 1). Furthermore, deaths are absent after 2010 (Table 1). It may be an overextrapolation to state that past managements represent an adverse prognostic factor. Advances in oncology over the years could likely have a significant impact. Although the outcomes appear favorable, follow-up data are still too incomplete to provide adequate information on the prognosis. 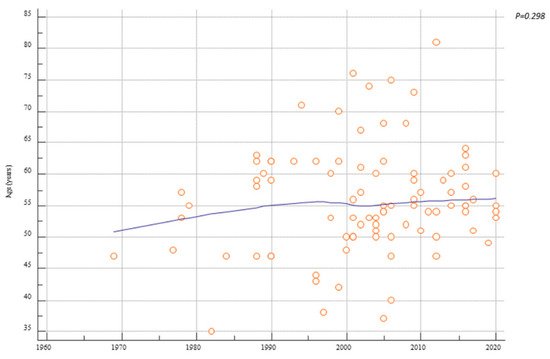 Figure 1. Scatter diagrams showing the trend over time of patients’ age affected by malignant transformation of postmenopausal endometriosis.
Table 1. Patients’ outcome according to the years of case publication.
A further emerging aspect of our data is the high percentage of previous bilateral salpingo-oophorectomy in women with subsequent malignant transformation. From our data, 58.4% of women underwent bilateral salpingo-oophorectomy procedures. These data seem to confirm further that the “risk-reducing surgical treatment” in women with previous endometriosis approaching menopause is not cost-effective [21]. On the contrary, the importance of removing all endometriotic lesions detected intraoperatively in any anatomical site is to be emphasized. These foci must be excised to obtain a histological diagnosis and reduce the future risk of recurrence/malignant transformation. Destructive treatment of minor endometriotic localizations is no longer acceptable [2].
The mechanism underlying this rare occurrence is unclear. It is likely that during surgical treatment, some not-macroscopically-visible endometriotic foci may be overlooked and left there. Furthermore, the same surgery can lead to an immediate inflammatory stimulus that favors the implantation and/or activation of any endometriotic foci not detected intraoperatively. When surgery is not performed, the presence of asymptomatic endometriosis locations may likely persist for a long time. These lesions may receive autocrine, paracrine, and exogenous stimuli along with cancer-predisposing gene mutations [21][22]. The use of estrogen-only HRT appeared to be recurrent in old cases. As a result, although solid evidence is missing, current recommendations on HRT include continuous combination formulations or Tibolone in women with previous endometriosis [2]. Furthermore, the choice of HRT use must balance the risk of bone and cardiovascular diseases with the possibility of recurrence/malignant transformation of endometriotic lesions [6]. To date, there is little data to provide solid evidence-based recommendations. There is a need for randomized controlled trials or extensive observational studies on this topic to give an accurate and individualized evaluation and information.

In the malignant transformation of postmenopausal endometriosis, there are some recurrent patient characteristics:
However, these clinical conditions have shown a drastic decrease in more recent years. It is likely that this could be the consequence of different attitudes and management of gynecologists linked to up-to-date scientific evidence about the use of major surgery in gynecological pathologies. Malignant transformation of postmenopausal endometriosis is a clinical challenge to be explored further.