2021-08-22 21:05:17
A very interesting Entry on the potential for biotechonolgies of psychrophiles microorganisms and their role in cold environments. Very good.
2000/2000
×
Table of Contents
Hide
Topic review

Cold-loving microorganisms of all three domains of life have unique and special abilities that allow them to live in harsh environments. They have acquired structural and molecular mechanisms of adaptation to the cold that include the production of anti-freeze proteins, carbohydrate-based extracellular polymeric substances and lipids which serve as cryo- and osmoprotectants by maintaining the fluidity of their membranes. They also produce a wide diversity of pigmented molecules to obtain energy, carry out photosynthesis, increase their resistance to stress and provide them with ultraviolet light protection. Recently developed analytical techniques have been applied as high-throughoutput technologies for function discovery and for reconstructing functional networks in psychrophiles. Among them, omics deserve special mention, such as genomics, transcriptomics, proteomics, glycomics, lipidomics and metabolomics. These techniques have allowed the identification of microorganisms and the study of their biogeochemical activities. They have also made it possible to infer their metabolic capacities and identify the biomolecules that are parts of their structures or that they secrete into the environment, which can be useful in various fields of biotechnology.

The identification and characterization of new biomolecules from natural resources is a major challenge for today’s society. Therefore, new strategies and next-generation approaches are needed. Frozen environments constitute an ecological niche inhabited by microorganisms with very remarkable characteristics that produce specific biomolecules. Nowadays, the cryosphere covers about one-fifth of the surface of the Earth [1]. This includes the polar ice sheets, sea ice, ice caves and mountain glaciers ( Figure 1 ). The discovery of cold-tolerant microorganisms in permanently frozen environments has broadened the known range of environmental conditions which support microbial life. Most of the biomass of the cryosphere is made up of microorganisms. There are various classifications for cold-loving microorganisms, but the most used is that of Morita [2], which differentiates between psychrophiles and psychrotolerants or psychrotropes. As this review is more focused on biomolecules than on microorganisms, we will refer to all of them generically as psychrophiles [3]. Microbial activity at cold temperatures is restricted to small amounts of unfrozen water inside the permafrost soil or the ice, and to seawater. Life thrives in these environments with an extraordinary microbial diversity of bacteria, archaea, fungi (in particular yeasts) and microalgae. The freezing process represents an important threat for the survival of life, as growing ice crystals can break cells and disrupt their membranes. Temperatures below 0 °C slow down cellular reaction rates by altering the functionality of the molecular building blocks. However, sometimes cells do not only tolerate this extreme environment, but require it to live. It is well documented that the temperature ranges of microbial habitats play a major role in the selection and adaptation of the resident microorganisms, and hence in microbial diversification [4]. Cold-adapted microorganisms possess molecules (lipids and proteins) in their cellular membranes which provide a flexible interface with the environment for the continued uptake of nutrients and the release of by-products. In this way, they maintain homeostasis and biochemical catalysis at low temperatures.

In recent years, a plethora of new techniques, notably omics, have revolutionized the study of environmental microorganisms. Omics include genomics, transcriptomics, proteomics, glycomics, lipidomics and metabolomics. These techniques have made it possible to discover a microscopic frozen world populated by microorganisms of a very diverse nature, capable of adapting to an extreme environment. These techniques have allowed us to know how these organisms live, and what types of adaptations to the environment allow them to survive.

It is true that the vast majority of polar microorganisms cannot be cultured or isolated, and new strategies and next generation approaches are needed to increase the chances of drug discovery (Figure 5). Omics comprise several and very different techniques, such as genomics, transcriptomics, proteomics, glycomics, lipidomics and metabolomics [5]. 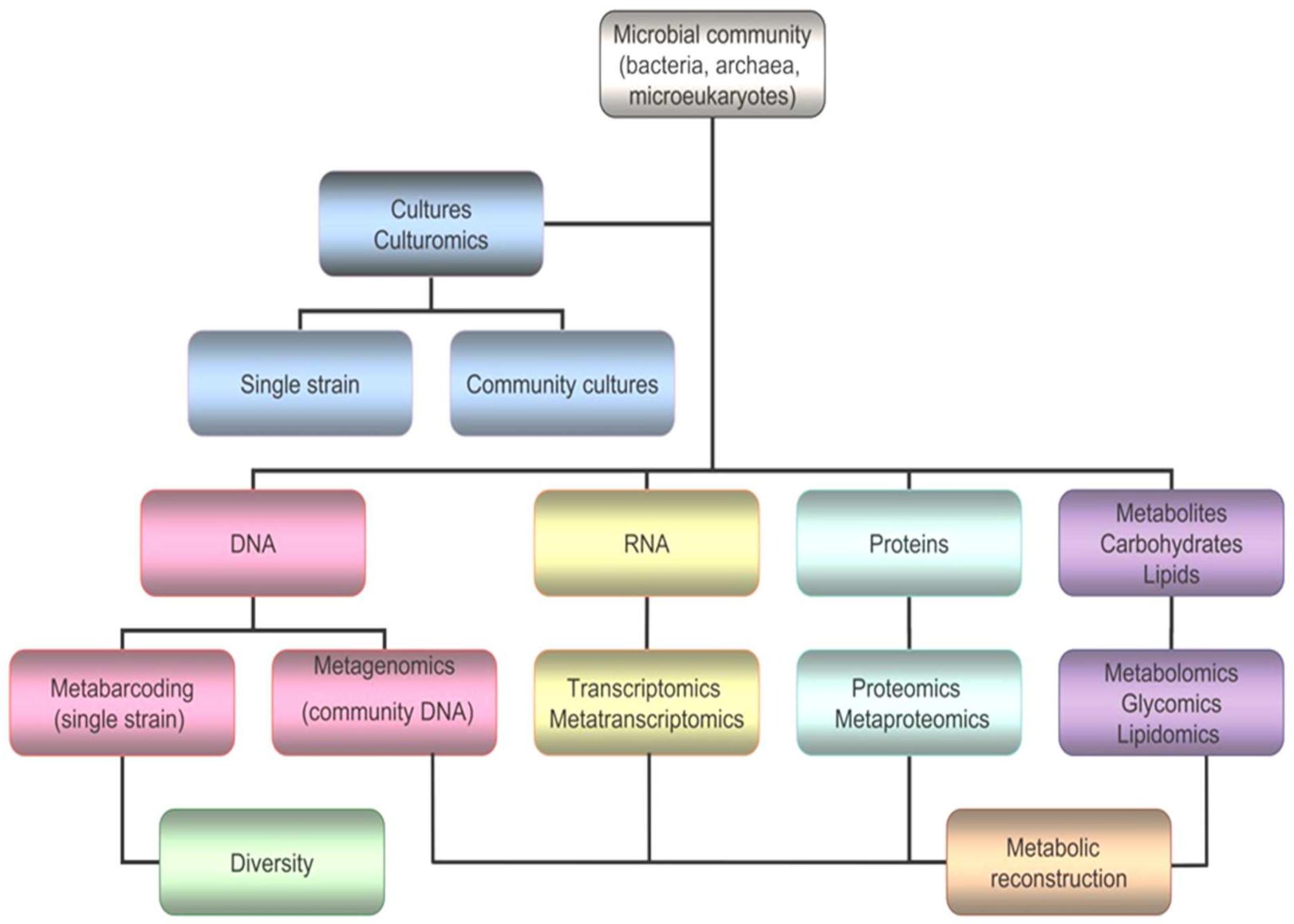 Genomics aims at the characterization, sequencing and analysis of genomes. In environmental microbiology, this discipline has revolutionized the understanding of microbiomes, and in frozen environments, it has meant unprecedented advances. Knowledge of the microbial genome is essential for the development of other omics, such as proteomics, which predicts the amino acid sequences from the genetic sequences of the organisms to be studied. To identify the proteome of a microorganism, it is essential to know its genome first. The best-known proteomes are those from “model species” whose genomes were completely sequenced years ago, and their comprehensive study by other omics also occurred very fast. However, other less genetically studied environmental microorganisms have encountered the stumbling block of a lack of genetic knowledge.
Nowadays, genomics comprises two large groups of techniques: metabarcoding and metagenomics.

As we have described, genomics applied to DNA samples from cold environments informs us about the existence and diversity of the microorganisms that inhabit them. These techniques can also inform us about the theoretical metabolic potential of microbial communities, but it is not possible to know their capacities for survival and proliferation, nor the molecular mechanisms of adaptation that allow microorganisms to live in such hostile environments. To learn about their physiology and metabolisms, it is necessary to know which RNAs are translated in cells, giving rise to proteins.
Transcriptomic and metatranscriptomic analyses retrieve knowledge about genes expressed under certain conditions. These studies have yielded important insights into the mechanisms and metabolisms that allow psychrophiles to remain active in cold environments. Many of these studies about bacteria, archaea, algae, ciliates and diatoms from frozen environments have been reviewed in [6]. These results show numerous changes in the transcriptional profiles at cold temperatures and the regulation of the genes involved in cellular processes such as metabolism, cell wall biosynthesis, cell membrane composition and stress responses.
Besides standard RNA, there are antisense transcripts that contain information regarding other functions. These small non-coding RNAs are mainly involved in regulatory roles, controlling the expression of various genes in a cell under different conditions, including specific stress conditions and environmental or morphological changes. For example, the role of small non-coding RNA has been studied for the control of gene expression in the model organism Streptomycetes required to efficiently regulate its complex life cycle [7].

Proteomics studies the set of proteins expressed by a cell (proteomics) or set of cells (metaproteomics) under certain conditions, giving rise to high-throughput data. They have been widely used techniques for the study of psychrophilic microbial communities. The proteins to be studied can firstly be separated by chromatographic or electrophoretic techniques and subjected to analysis by mass spectrometry.
Matrix-assisted laser desorption ionization-time of flight mass spectrometry (MALDI-TOF/MS) has emerged as a powerful approach suitable for analyzing not only proteins, but many other macromolecules, such as polysaccharides, lipids and nucleic acids. The ability to precisely determine molecular weight by this technique and to search databases for mass matches has made high-throughput identification possible in many microbial samples [8].
Among microbial proteomes, these techniques have been employed to study biomolecules such as the aforementioned cytochromes, Csps, AFPs or enzymes. On the other hand, proteins constitute the molecular machines that function within cells. The study of molecular machinery elucidates the mechanism of action of biomolecules in cells, or whether molecules induce drug resistance responses. Proteins undergo different post-translational modifications to perform their functions, which modify the detected masses, and in this way they can be detected. Moreover, proteins interact with other proteins, forming protein complexes. These complexes can also be studied by these techniques [9].

Glycomics and Lipidomics involve the study of carbohydrate (glycome) and lipid (lipidome) profiles, respectively. As mentioned above, many of the molecules that allow the survival of microorganisms at low temperatures are carbohydrates and lipids. Just as nucleic acids and proteins are polymers formed by repeating monomers and can be studied with standardized methodology and found in well-documented databases, carbohydrates and lipids have such disparate molecular structures that their study is very complex.
Glycomics focuses on the characterization and quantification of carbohydrates and their conjugates, including proteoglycans, aminosugars, sulfoglycans and glycolipids. The two major carbohydrate databases of glycomes are the Bacterial Carbohydrate Structure Data Base (BCSDB) and Glycosciences.de (GS) [10].
Lipidomics studies a vast diversity of molecules with very different molecular structures. Even so, mapping the lipid profiles of microorganisms is crucial to studying their metabolic pathways and to finding active biomolecules with biotechnological potential [11]. Some Antarctic bacteria living in sea ice—for instance, Shewanella and Colwellia—produce polyunsaturated fatty acids, such as eicosapentaenoic acid and docosahexaenoic acid, as components of their membrane phospholipids. These polyunsaturated fatty acids are used in the pharmaceutical industry for their favorable effects on pathologies as diverse as atherosclerosis, diabetes and high blood pressure [11].

The microbial metabolome is the set of low molecular weight molecules (e.g., metabolic intermediates, hormones, signal molecules and secondary metabolites) contained or excreted from a certain microorganism in a particular time, or under specific environmental conditions. Its study is very helpful because it provides information on the physiological state of a microorganism.
The most widespread techniques for the study of the metabolome are mass spectrometry after separation of the components by various techniques, giving rise to gas chromatography-mass spectrometry (GC-MS), liquid chromatograph-mass spectrometry (LC-MS) and capillary electrophoresis-mass spectrometry (CE-MS). The de novo elucidation of the molecular structure can be done by nuclear magnetic resonance (NMR).

The microbial communities that populate the cryosphere represent an inexhaustible source of biomolecules with great potential to be used as active principles, as raw materials in the industry, and as useful molecules in “cold biotechnology.” These microorganisms, adapted to frozen worlds, have to cope with a hostile environment that forces them to develop specific adaptation mechanisms and to produce very specific molecules. Additionally, they are parts of the biogeochemical cycles of the ecosystems that they occupy and interact with many other living beings. At present, climate change is seriously threatening their environments, and many of the ecological niches they occupy will be modified or will disappear completely in the future. These microorganisms have also great appeal as biosensors of climate change [12]. Microbial populations, and some indicator species, are sentinels for environmental degradation and alteration in the cycling of globally important elements. Finally, it should be noted that biomolecules from cold-loving microorganisms are of great interest in many other applications, such as astrobiology and space exploration [13].
It is necessary to explore their potential as a source of biomolecules and to promote their study by taking advantage of the large number of opportunities offered by technologies such as omics and bioinformatics. To advance in the discovery of biomolecules from environmental microorganisms, it is necessary to completely sequence their genomes and deposit their sequences in public databases. This information is essential for the development of other techniques such as proteomics. The perspectives include a breakthrough from computer sciences to integrate all information gathered from omics, and to add data that can be theoretically deduced from metagenomic information or from bibliographic references and databases.