Transglutaminase 2 (TG2) is a ubiquitously expressed enzyme catalyzing the crosslinking between Gln and Lys residues and involved in various pathophysiological events. Besides this crosslinking activity, TG2 functions as a deamidase, GTPase, isopeptidase, adapter/scaffold, protein disulfide isomerase, and kinase. It also plays a role in the regulation of hypusination and serotonylation.

Transglutaminases (TGase) are multifunctional enzymes and constitute a family of eight isozymes designated as blood coagulation factor XIII and TG1–7. In this family, TG2 is widely distributed and involved in multiple biological processes. It catalyzes a Ca 2+ -dependent acyl transfer reaction between the γ-carboxamide group of glutamine present in a particular sequence and either primary amines, such as polyamines and histamine, or the ε-amino group of a lysine residue, intra- or inter-molecularly. Water replaces the amine donor substrates, leading to the deamidation of glutamine. In addition, TG2 and factor XIIIa exhibit a Ca 2+ -dependent isopeptidase activity and can hydrolyze the isopeptide bond, at least under test tube conditions. TG2 exerts additional enzymatic activities that do not require Ca 2 + , i.e., it hydrolyzes ATP and GTP to mediate signal transduction through G-protein-coupled receptors, protein disulfide isomerases, and protein kinases, as well as interacts with several proteins as an adhesion or scaffold protein [1] ( Figure 1 ). 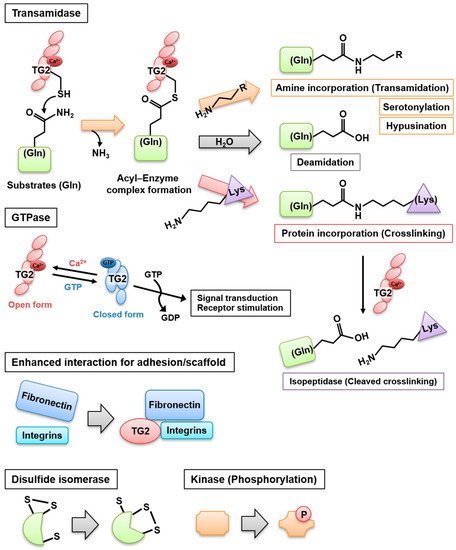 Figure 1. TG2 multifunctional roles. TG2 contributes to the posttranslational modification of several substrate proteins via multiple mechanisms, acting as a transamidase, deamidase, crosslinking protein, isopeptidase, GTPase, adhesion/scaffold protein, disulfide isomerase, and kinase. The mechanisms of some TG2 functions remain unclear. Thanks to its multiple roles, TG2 exerts various biological functions depending on the stimulus, leading to cell death or survival and tissue repair.

TG2 is ubiquitously distributed inside (in the nucleus, cytoplasm, plasma membrane, and mitochondria) and outside the cell, where it appears in the extracellular matrix (ECM) and exosome [2][3][4]. In mammals, TG2 is detected across the body, including the blood, extracellular spaces, and intracellular compartments of nearly all tissues. It is involved in cell death, growth, and differentiation as well as tissue repair by tissue remodeling/wound healing and ECM assembly [5]. In this article, we focus on the role of TG2 in cell death, macrophage activation, and tissue repair processes, which are involved in several pathogeneses, including tissue injury, inflammation, and fibrosis. This review aims to summarize the recent knowledge on the mechanisms activated by TG2 to regulate cell death/survival and fibrosis in the tissue repair process.

2. Multifunctional Activity and Regulation of TG2

When cells are exposed to increased intracellular Ca 2+ concentrations (>700–800 nM) in response to certain stimuli, including injury and inflammation signals, TG2 structural conformation is dramatically altered and changes from a closed to an opened form that exerts crosslinking and transamidase activities [6][7]. In the appropriate redox condition, a TG2 intermediate thioester is formed through the attack of an acyl donor (γ-carboxamide group of a protein glutamine residue) by the nucleophilic active thiolate (cysteine residue at the active site of TG2), with release of ammonia. Then, the thiolate is restored via the nucleophilic attack of an acyl acceptor (ε-amino group of a protein lysine residue), leading to the formation of a covalent intra- or inter-molecular N ε -(γ-glutamyl)lysine isopeptide bond, which is resistant to degradation [8]. It has been suggested that the isopeptide bond contributes to the stabilization of the ECM and the prevention of the release of the intracellular content from apoptotic cells into the extracellular milieu. A similar reaction also occurs through the incorporation of primary amines and polyamines into the γ-carboxamide group of a protein glutamine residue.

If the aforementioned intermediate thioester bond is attacked by a water molecule as the acyl acceptor, a deamidation reaction occurs, in which the site-specific acyl-donor glutamine is converted to a glutamate residue [3]. For many years, the deamination reaction was believed to occur as a side reaction of the absence of primary amines or at low pH, when amine availability was limited. In these conditions, water would play a role owing to its abundance [9][10]. However, site-specific deamidations of heat shock protein [11] and βB2/3-crystallines [12] have been reported, suggesting that the substrate affinity for TG2 and the reaction conditions influence the propensity toward deamidation or transamidation [13].

The reversible crosslinking of α2-plasmin inhibitor to fibrinogen and fibrin by factor XIIIa was reported and is potentially involved in the regulation of fibrinolytic processes [14][15]. Biochemical studies demonstrated that TG2 also exhibits an isopeptidase activity targeting N ε -(γ-glutamyl)lysine [16]. Therefore, an unknown regulatory system of TG2 might exist to separately switch on or off the transamidase and isopeptidase activities. Specific TG2 mutants, which exhibit deficient transamidase (W332F) and isopeptidase (W278F) activities, have been identified [17]. Further research might help elucidate the role of the TG2 isopeptidase activity in physiological and pathological processes.

3. Regulation of TG2 Expression and Activity

TGM2 gene expression is regulated by various cellular events, including apoptotic stimuli [26][27], viral infection [28], endoplasmic reticulum (ER) stress [29][30], hypoxia/ischemia [31][32][33], inflammation [34], tissue remodeling [35], and cancer [36][37][38]. It is mediated by several related factors and cytokines, such as retinoids [39][40], lipopolysaccharides [41], transforming growth factor (TGF)-β/bone morphogenetic protein 4 [42], nuclear factor-κ B (NF-κB) [38][43], glucocorticoids [44], interleukin (IL)-1 [45], IL-6 [46], hypoxia-inducible factor-1 [47], tumor necrosis factor (TNF)-α [48], and epidermal growth factor (EGF) [36]. Retinoic acid is a well-known inducer of TG2 expression and promotes the cellular differentiation of neutrophil granulocytes [49][50] and neuroblastoma cells [51][52] through the heterodimer retinoid acid receptor (RAR)/retinoid X receptor (RXR) and transcription factor Sp1 [40]. TG2 expression is upregulated in cancer cells resistant to chemotherapy or with high metastatic potential. TGM2 promoter contains response elements to inflammation and hypoxia, which are greatly elevated in the environment surrounding malignant tumors, leading to an increased expression of TG2 [47]. Ischemia also promotes TG2 expression [31]. In addition, n-Myc and c-Myc contribute to the regulation of TG2 expression by recruiting histone deacetylase 1 protein to the TGM2 promoter in cancer cells [53]. Interestingly, the antiproliferative effects of histone deacetylase inhibitors in cancer cells are impaired by the induction of TG2 mRNA and protein expression, suggesting that TG2 is involved in the resistance of cancer cells [54]. Since the half-life of TG2 is about 10 h in colorectal cancer HT29 cells, the sustained protein synthesis of TG2 is necessary for cancer proliferation and resistance to anticancer drugs such as histone deacetylase inhibitors [54]. TG2 influences TGF-β activation and signaling, whereas TGF-β1 was reported to promote and suppress TG2 expression [42][55]. TG2 expression is increased by several cytokines, such as IL-6, TNF-α, and NF-κB, in many cell types, including human hepatoblastoma cells [46][48] and macrophages [56][57]. AF4/FMR2 family member 1, known as a central scaffolding protein of super elongation complex, was recently reported to contribute to TG2 expression after being recruited to the TGM2 promoter in mouse adipocytes [58]. 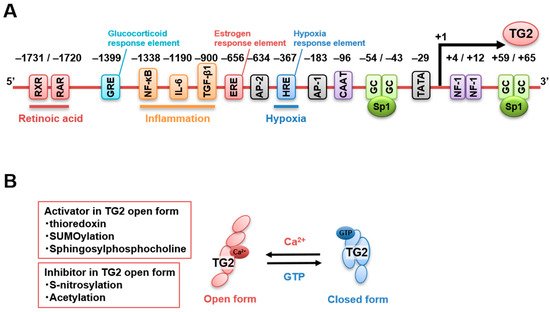 A few studies have focused on the regulation of TG2 activity compared with the number of investigations on its transcriptional regulation. Ca 2+ and GTP are known as a competitive activator and a suppressor of TG2 transamidase activity, respectively. Ca 2+ binding alters TG2 structural conformation by moving the β-barrel domains 3 and 4 away from the catalytic domain 2, opening the active center and facilitating access to the substrate. TG2 appears to be inactive in cells in the absence of stress (~100 nM free cytoplasmic [Ca 2+ ]). In addition, a free cytoplasmic GTP concentration higher than 100 μM is required to maintain the closed GTP-bound conformation of TG2, which inhibits its transamidase activity [67].

The conditions in the extracellular space are suitable for TG2 activation as Ca 2 + and GTP are present at high and low levels, respectively. However, a highly oxidative state was reported to keep TG2 in the inactive state in the absence of stress due to the formation of disulfide bonds as a posttranslational modification [68], which was reversed by thioredoxin-mediated reduction [69]. Furthermore, extracellular TG2 can be negatively regulated by S-nitrosylation, indicating that nitric oxide is also a potent inhibitor of TG2 activation and might be involved in age-related vascular stiffness [70][71]. TG2 acetylation was also reported to suppress its activity in vitro [72]. Finally, TG2 is stabilized by SUMOylation, which inhibits TG2 ubiquitination, leading to enhanced protein levels and activity [73][74].

The TG2 transamidase activity contributes to the wound healing process and fibrosis. The reaction products form an N ε -(γ-glutamyl)lysine isopeptide bond resulting from the crosslinking. This is an important step for the maturation and stabilization of ECM components, such as collagens, exacerbating scarring and fibrosis in various tissues, including the liver [75][76][77][78], kidney [79][80][81][82][83][84], lung [85][86][87][88][89][90], and heart [91][92]. The other enzymatic crosslinker, lysyl oxidase (LOX), has also been reported to contribute to collagen stabilization. LOX oxidizes certain lysine residues in collagen to produce aldehydes, which react to form covalent bonds and stabilize molecules within the collagen fibers [93]. Impaired crosslinking by LOX results in weak collagen fibers and fragile collagenous tissue [94]. In the remodeling of fibroblast-populated collagen lattices, TG2 predominantly contributes to the Ca 2+ -dependent early entrenchment (initial remodeling) by crosslinking of the extant matrix, whereas LOX implicates Ca 2+ -independent contractility at later times [95]. These results suggest that, in fibrosis, TG2 is involved in early ECM remodeling, while LOX contributes to subsequent modification.

Aside from the direct ECM stabilization, the TG2 transamidase activity appears to play a significant role in the fixation and activation of the profibrotic cytokine TGF-β. TGF-β is released in a latent form and converted to an active one. Enhanced TG2 activity is required for TGF-β activation from the latency binding complex as it promotes crosslinking of the large latent TGF-β binding protein to fibronectin or other ECM components on the cell surface [90][96][97][98][99]. The secretion of TG2 into the ECM is important for its function in TGF-β activation. The secretion mechanisms are unclear, as TG2 lacks the signal peptide necessary for ER targeting and the classical protein secretion mechanism through the ER–Golgi system. Moreover, no Golgi-associated protein modification, such as glycosylation, has been evidenced for TG2 [100]. Recent studies demonstrated that TG2 interacts with the heparan sulfate chains of proteoglycans, forms a complex with fibronectin, and interacts with integrins and heparan sulfate proteoglycans in the ECM to promote cell adhesion and spreading [101][102]. The interaction between TG2 and the heparan sulfate chains of cell surface syndecans is a potential mechanism implicated in the pathophysiological role of TG2, including in fibrosis [103][104][105].

As previously described, we demonstrated that nuclear TG2 inactivated Sp1 by crosslinking, leading to reduced expression of c-Met and consequently activation of hepatic apoptosis in a hepatic injury mouse model and in patients with alcoholic steatohepatitis [106]. TG2-mediated reduction of c-Met expression might be involved in the impaired hepatocyte regeneration observed in patients with alcoholic liver diseases [107][108][109]. Furthermore, hepatocyte-specific c-Met-deficient mice demonstrated more extensive liver cell damages and fibrosis, indicating that the induction of nuclear TG2/crosslinked Sp1 /downregulated c-Met axis accompanied liver fibrosis. In agreement with our findings, TG2 nuclear accumulation and crosslinked Sp1 were observed in the fibrotic area of patients with alcoholic steatohepatitis [110].

However, TG2-deficient mice demonstrated no alteration of the fibrosis levels in the liver after treatment with CCl4 or thioacetamide [111]. This contradictory result might be due to discrepancies in the method used to target the TGM2 gene, in the mouse background, and in the disease model. We obtained similar results using TG2-deficient mice. Indeed, liver fibrosis induced by bile duct ligation was not inhibited in these mice [77], although these mice presented a significant reduction of fibrosis induction in other fibrosis models, such as kidney fibrosis induced by unilateral ureteral obstruction [83] and lung fibrosis resulting from bleomycin treatment [87]. Interestingly, TG2 or pan-TGase inhibitors, including competitive or reversible/irreversible inhibitors, have been demonstrated to be consistently protective in several fibrosis models, including liver fibrosis induced by both CCl4 and bile duct ligation [112][77][83][113][114][115][116][117][118].