The first formal description of the microbicidal activity of extracellular traps (ETs) containing DNA occurred in neutrophils in 2004. Since then, ETs have been identified in different populations of cells involved in both innate and adaptive immune responses. Much of the knowledge has been obtained from in vitro or ex vivo studies; however, in vivo evaluations in experimental models and human biological materials have corroborated some of the results obtained. Two types of ETs have been described—suicidal and vital ETs, with or without the death of the producer cell. The studies showed that the same cell type may have more than one ETs formation mechanism and that different cells may have similar ETs formation mechanisms. ETs can act by controlling or promoting the mechanisms involved in the development and evolution of various infectious and non-infectious diseases, such as autoimmune, cardiovascular, thrombotic, and neoplastic diseases, among others.

With the great impetus given to the understanding of cellular functions in the immune system in the early 1950s, much information has been obtained; nevertheless, some mechanisms have not yet been fully elucidated. This knowledge is crucial to understand the mechanisms of disease and/or protection, since knowing how to recognize in what way diseases occur develop new treatments and effective vaccines with fewer adverse effects. Thus, paraphrasing Stephen Hawking [1], cells are a universe involved in a plasma membrane, and new components and functions are described every day [2][3][4][5].

The ETs formation seems to be a fast event, and perhaps, for this reason, it has not been easily observed in vivo until now. In addition, some cells in which their formation has been described are difficult to handle. Thus, much of the knowledge was obtained from in vitro or ex vivo studies with different protocols (reviewed in [2]). However, evaluations in experimental models and human samples have corroborated many of these results [6]. Although some mechanisms and effects of ETs release still need further elucidation, what is already known shows the importance of ETs in the control and/or development of the immune response.

The term ETosis was coined in the late 2000s [7][8] to designate a type of cell death promoted by decondensation of nucleic DNA called ETs. Based on the first description of the microbicidal activity of neutrophils [9], several studies showed that ETs play a pivotal role in infection control through an innate immune response, and their understanding, scope, and particularities have been described over subsequent years. Additionally, what has been previously described as having a beneficial action upon the resolution of inflammation is now known to be also capable of expanding inflammatory processes. It is also involved in the pathogenesis of various infectious and non-infectious diseases, such as autoimmune, cardiovascular, thrombotic, and neoplastic diseases, etc. [2][10][11][12][13]. It is known that DNA must be removed from the system rapidly, since it may stimulate an inflammatory response, as observed in the suggested relationship between the presence of extracellular DNA and several autoimmune diseases, such as systemic lupus erythematosus (SLE) and rheumatoid arthritis (RA), as well as HIV infection, cardiovascular diseases, and neoplasms [14][15][16][17].
Besides neutrophils, ETs formation has already been identified in macrophages, mast cells, eosinophils, basophils, plasmacytoid dendritic cells, and recently in lymphocytes. Hence, the term originally coined (NETs—neutrophil extracellular traps) was adapted according to the cell type involved. The cell death resulting from this process was called ETosis to differentiate it from other types of cell death, such as necrosis, apoptosis, necroptosis, and pyroptosis [7][8][13][18].

It is worth noting that recent studies suggest that the intensity and type of inflammatory response produced by DNA traps depend on the type of producing cell, the origin of the DNA involved, and on the presence of other associated products or not with DNA, such as enzymes, plasma proteins, histones, etc. More recently, it has been found that not all ETs formation produces cell death [19][20][21], and a new classification of DNA types released into the extracellular environment has been organized [2][21]. In summary, the previously detected types of DNA release are divided into: (1) Suicidal ETosis—nuclear DNA release with histones, which occurs 3–8 h after cell activation. The nuclear chromatin is decondensed, and after expanding into the cytoplasm, it associates with cytoplasmic and granular proteins. As expansion continues, the plasma membrane breaks, causing the death of the involved cell and the release of the DNA associated with histones and other proteins into the extracellular environment, thus forming filament traps in continuous expansion. This can be detected after stimulation by phorbol myristate acetate (PMA), concanavalin A (ConA), interferon (IFN), infectious agents, immune complexes, and autoantibodies, among others [2][10]; (2) vital ETosis—release of DNA, maintaining cell viability. The vital ETs formation is an early/rapid process that usually occurs between 5–60 min after cell activation, which continues to perform its functions, such as chemotaxis and phagocytosis after externalization of DNA (nuclear or mitochondrial) simultaneously as degranulation and protein release [2][19][20][21][22]. Two main forms have been described: (1) Extracellular environment release of vesicles containing nuclear DNA, which expands to form extracellular traps. Initially, it maintains cell viability and functions as chemotaxis, adherence, and phagocytosis. It has been well described for neutrophils, even when anuclear cells are identified, since the granules and outer membrane are preserved [19][20][21]. In vitro studies suggest a rapid process when compared to ETs produced by suicidal ETosis. It has already been described that later, these cells also die and are usually phagocytosed by macrophages; (2) produced from mitochondrial DNA (mtDNA) in a mechanism dependent on reactive oxygen species (ROS), which is also related to the maintenance of cell viability. Essentially, two forms of mtDNA exteriorization are proposed: (A) Initial release into cytosol and thereafter into vesicles that merge with the plasma membrane, exteriorizing their content; and (B) mitochondrial and plasma membrane fusion, producing the direct release of DNA content, into the extracellular environment. However, the latter has not yet been fully proven [2][3][4][5][10][13][23][24].

3 - ETs in Health and Disease 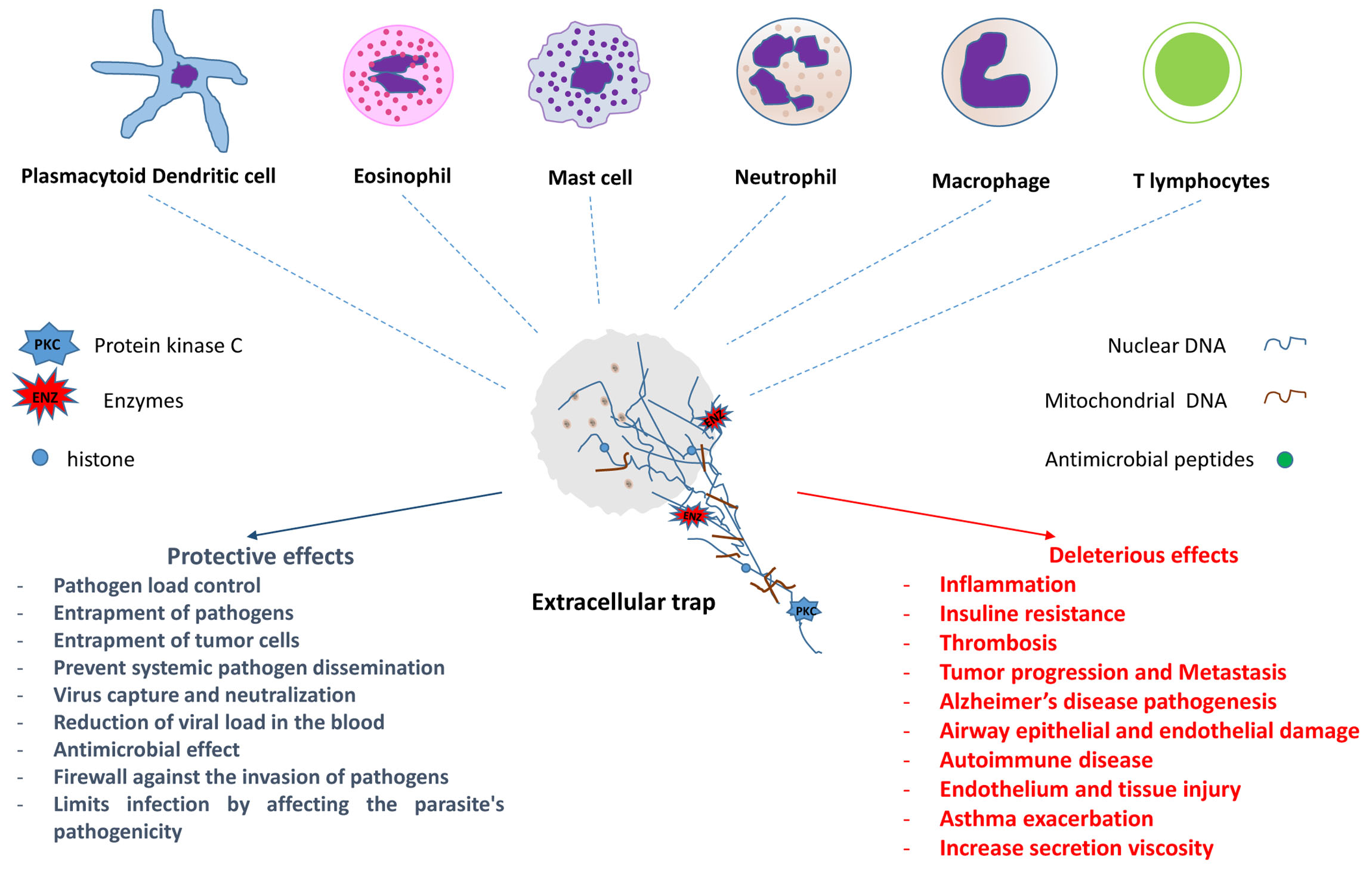 The formation of extracellular traps (ETs) containing DNA is clear evidence. The mechanisms described are varied and can be identified as inhibitors or facilitators of lesions. ETs can be virtually seen in any compartment of the human body, such as solid organs and blood, where clusters of ETs are cell-free and may be involved in the formation of thrombus and tissue injury [5][24]. On the other hand, the presence of enzymes can degrade inflammatory mediators, which could lead to a decrease in the inflammatory process, promoting the resolution of lesions. Concerning infectious diseases, releasing ETs into the extracellular environment promotes the capture and death of the surrounding microorganisms [25][26][27][28][29]. Moreover, the presence of DNA and other proteins can lead to an increment in local inflammation, including exacerbation of the disease [10][30]. Even so, it has been described that the evasion of microorganisms by DNase production, the inhibition of cell recruitment from the immune response, as well as the evasion of bacteria by modification of the cell wall with alteration of the ionic charge, hampers the coupling of the microorganism to ETs (reviewed by the authors of [31]).
All these years of studies and data collection on ETs identify a variety of cell types involved, as well as formation mechanisms and potential actions of releasing extracellular traps upon protection and disease. However, information capable of elucidating some important mechanisms is still deficient.
Moreover, considering that there are not enough in vivo studies, it is essential to develop experimental models and studies on human biological material that can verify the influence of ETs on the pathophysiology of infectious and non-infectious diseases, such as autoimmune diseases. Much is already known, but much more needs to be known to understand the dynamics of ETs in inflammation. For instance, how the cell is stimulated to develop ETs and not another effector mechanism, the effect of these traps on the infectious/inflammatory process, and the impact of these extracellular traps on the other types of cells involved in the immune response.
On the other hand, there is no doubt that all the knowledge generated so far regarding the formation of ETs. Many data that are generated daily on this subject, point to the possibility of developing new drugs, or repositioning already known drugs, capable of preventing the development of ETs or leading to their dissolution, as immunotherapeutic alternatives in a variety of infectious and non-infectious diseases, notably those with immunothrombotic characteristics, such as COVID-19. The immune system sets its traps; however, we still do not fully understand how and what the consequences of this movement are.