The increasing efficiency of the different lasers and the improved performance of endoscopic devices have led to smaller stone fragments that impact the accuracy of microscopic evaluation (morphological and infrared). Before the stone destruction, the urologist has the opportunity to analyze the stone and the papillary abnormalities endoscopically (endoscopic papillary recognition (EPR) and endoscopic stone recognition (ESR)). Our objective was to evaluate the value for those endoscopic descriptions.

The number of endoscopic treatments of urinary stones increases all over the world.
As previously demonstrated by Daudon et al. [1][2][3][4][5], the morpho-constitutional stone analysis plays a major role in identifying its etiology and thus consider its risk of recurrence. The increasing efficiency of lasers in “dusting” and “popcorning” modes [6][7][8][9] and the improved performance of endoscopic devices led to smaller stone fragments, which reduce the accuracy of the microscopic study (morphological and infrared) by the lack of components representativeness (48.6% of the stones have a mixed composition [10])). Moreover, Keller et al. [8][9] have demonstrated that laser-based Thulium fiber changed in stone composition in the infrared spectra that resulted in insufficient information of stone powder examination (Figure 1).
Since Randall’s works [11] in the 1930s, it is known that papillary calculi resulted from subepithelial lesions [12][13][14][15][16][17]. The advent quality of images with flexible retrograde ureteroscopy has allowed the in vivo description of papillary abnormalities [18][19][20][21] that can be related to various lithogenesis mechanisms [22][23][24][25][26][27][28].
Before the destruction of the stone, the urologist has the opportunity to hold a key role in stone prevention by recognizing the papillary abnormalities (endoscopic papillary recognition (EPR)) and the stone’s type (endoscopic stone recognition (ESR)).

After a bibliographic search and the removal of duplicates, a total of 54 articles were screened.
After full text assessment, a total of 17 publications met the inclusion criteria (Figure 1 and Table 1). 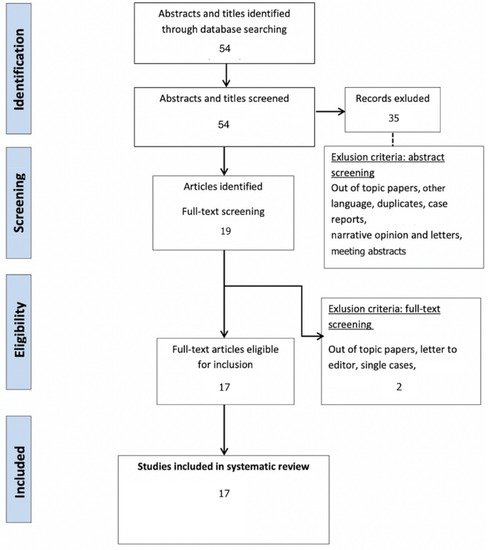 In the last century, eating habits have changed with an increased intake of salt, animal proteins, and refined sugar and a decreased intake of vegetables [34]. That consequently implied a change in stone composition and a prevalence increased [35]. These changes are especially concerning COM (subtype Ia [1]) that are mostly correlated with the prevalence of RP [19][25], low fluid intake [36], and the evolution of dietary habits [35][37][38].
As previously demonstrated by Daudon et al. [1][2][3][4][5], the morpho-constitutional stone analysis plays a major role in identifying the etiology of the stone disease and thus in stone recurrence. The increasing efficiency of lasers in “dusting” and “popcorning” modes [6][7][8][9] decreases the size of stone fragments and the accuracy of the microscopic study (morphological and infrared), thus impairing the etiologic investigation’s results. This lack of data may be balanced by EPR-ESR [10][18][20][25] and the papillary anchored stones analysis.
However, some limitations are still debated. First, the literature addressing the endoscopic papilla and stone recognition is poor and most of the published studies were from a single institution and had a small cohort.
As the endoscopic interpretations of the papillary abnormalities are only based on endourologist descriptions, their reliability, especially concerning the type of deposits (RP, plugs) and the origin of the crystallization (RP anchored, intraductal origin), remain a potential limitation and a potential interpretation bias [10][18][19][20][21][25][28].
The main problem in recognizing papillary abnormalities and stones composition is the very large array of descriptions and entities [20][21][25]. Thus, the learning curve for EPR and ESR is long and difficult, it has been shown that a perfect recognition of the stone was obtained in only 40.7% of the cases for urologist in training who benefited from nine specific teaching classes [39]. Nevertheless, the concordance between expert endoscopic description and microscopic analysis was much better with 86.1% (COM), 85% (COD), 91% (UA), 79% (CP), 65% (Brushite), 75% (Struvite), and 100% (Cystine) [10]. Although learning this specific skill might be time-consuming, training is certainly the key until the development of recognition models created by artificial intelligence (AI). In vitro, automatic detection of kidney stones composition from digital stone pictures has been described with a prediction of 94% (UA), 90% (COM), 86% (Struvite), 75% (Cystine), and 71% (Brushite) [40]. AI is about to be applied to in vivo validated endoscopic pictures, but stone morphological laser changes and heterogenous vision quality may hamper its development. AI will also be used to simplify EPR. Indeed, the efficacy of deep learning to segment the renal papilla, plaque, and plugs has already been described 46].
The backbone of ESR and EPR remains the recognition, which is based on a good intraoperative vision. Therefore, some variables have to be considered, such as fiberoptic devices that do not have high-definition vision quality [41], single-use and reusable digital ureteroscopes that do not seem to be equivalent in term of color, brightness, and definition [42][43][44]; and PCNL that cannot allow a complete exploration of the papillae. Today and for those reasons, the best way to proceed EPR and ESR is the use of digital flexible ureteroscopes.
Recently, it has been shown that lasers impacted the infrared analysis regarding stone composition [8][9]. Moreover, recognition could be biased by the dusting settings (high frequency and long pulse) that might change the surface appearance (Figure 2) especially due to a carbonization effect (Figure 3) (mainly described with Thulium Fiber Laser). 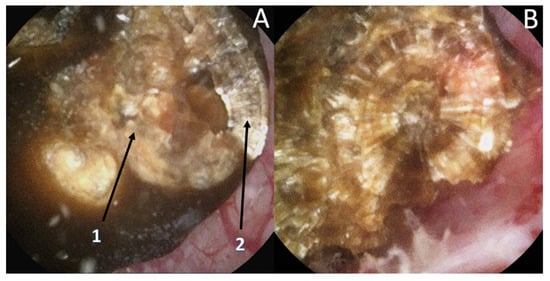 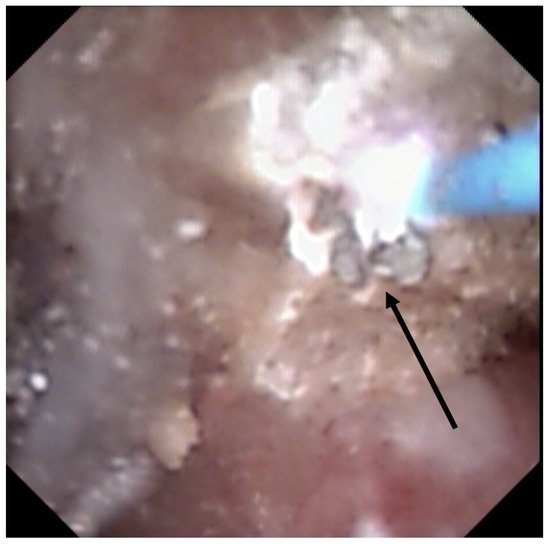 Figure 3. Stone morphological laser-induced changes. Carbonization (shown by the black arrow) during TFL treatment, which can be misleading for ESR.
To limit these biases, an initial transection of the stone has been proposed but remains difficult, time consuming, and provides more fragments to treat. Therefore, the use of the fragmentation setting might help to properly assess the internal layers and the use of dusting should be used only after the complete description [8][9].
Although it represents the origin of crystallization, stone analysis and ESR often miss the nucleus structure analysis due to stone destruction. Hence, the additional EPR analysis could provide essential information regarding the lithogenesis mechanism and avoid misdiagnosis of high-risk diseases like distal tubular acidosis. Although it is still under evaluation, the intensity and the amount of the papillary abnormalities may also have a prognostic value regarding stone recurrence.
Combining these complementary methods should be gathered in a single process of endoscopic papilla and stone recognition (EPSR). It could support the preventive care of the stone formers in improving the diagnosis of the lithogenesis mechanism and in identifying the high-risk stone formers.
In this way, the urologist should play a key role in lithiasis prevention and stone formers’ care improvement.