The traditional Japanese single distilled liquor, which uses koji and yeast with designated ingredients, is called “honkaku shochu.” It is made using local agricultural products and has several types, including barley shochu, sweet potato shochu, rice shochu, and buckwheat shochu. In the case of honkaku shochu, black koji fungus (Aspergillus luchuensis) or white koji fungus (Aspergillus luchuensis mut. kawachii) is used to (1) saccharify the starch contained in the ingredients, (2) produce citric acid to prevent microbial spoilage, and (3) give the liquor its unique flavor.

Traditional Japanese distilled liquors include shochu and awamori [1]. Shochu is divided into two types, single distilled shochu and continuously distilled shochu, depending on the distillation method used under the Japanese Liquor Tax Law. Among single distilled liquors, those usingkojiand yeast with designated ingredients are specifically called “honkaku shochu”. Kojiis a fermented grain, such as rice and barley, with filamentous fungi (calledkojifungi).Kojiproduces saccharification enzymes, which convert the starch contained in the ingredients into mono- or disaccharides which can be further utilized by yeast to produce ethanol [2].

Originally, honkaku shochu was mainly enjoyed in the Kyushu region in the southern part of Japan, but it began to spread throughout Japan around 1980; in recent years, it has also been enjoyed overseas. Honkaku shochu is made using local agricultural products as fermented ingredients. There are various types of honkaku shochu, such as barley shochu, sweet potato shochu, rice shochu, and Japanese buckwheat (soba) shochu. In addition to alcohol, it contains an abundance of other characteristic flavor components.

In this review, we discuss the preparation of single distilled shochu, in whichkojifungi are an important factor, and describe the types and characteristics ofkojifungi used in the making of shochu.

A. oryzaestrains cannot produce high amounts of organic acids. Prior to the start of shochu making, in southern Ryukyu Islands of Okinawa, awamori was being made using the blackkojifungus,Aspergillus awamoriorA. luchuensis,which can produce large amounts of citric acid. At around 1910, shochu breweries in Kagoshima, Japan, introduced the blackkojifungi from Okinawa to makekojifor shochu [3]. The threekojifungi used for producing shochu or awamori belong toAspergillussectionNigri, which includeskojifungi andA. niger.

After inoculation of thekojifungusA. luchuensisto steamed rice or barley grains (termedTanekiri), the cultivation temperature gradually increases to approximately 40 °C due to the heat generated by the growth ofA. luchuensis; the temperature is then lowered to approximately 30 °C by a mixing and cooling processes called “Shimaishigoto” [4] (Figure 1). This temperature modulation is considered to be developed and refined based on the experiences of shochu craftsman in order to control the production of optimal amounts of amylases and citric acid [4]. The initial stage characterized by higher temperature is known to stimulate amylase activity, whereas the later stage characterized by lower temperature enhances the production of citric acid [5][6]. 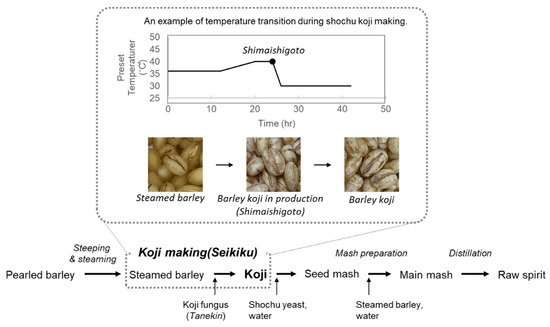 Carbon sources such as glucose and sucrose are metabolized to produce pyruvate via the glycolytic pathway; subsequently, citric acid is synthesized by citrate synthase as an intermediate compound of the tricarboxylic acid (TCA) cycle in the mitochondria and excreted into the cytosol prior to subsequent excretion into the extracellular environment (Figure 2) Based on the transcriptomic and metabolomic data, the lower temperature causes the downregulation of genes involved in glycerol, trehalose, and pentose phosphate metabolic pathways, indicating that heat adaptation leads to reduced citric acid accumulation through the activation of pathways branching from glycolysis [7]. In addition, significantly reduced expression of genes related to heat shock responses and increased expression of genes related to amino acid transport were also observed after the temperature decrease. Thus, solid-state cultivation at 40 °C is considered to be stressful forA. luchuensis, preventing the production of citric acid. 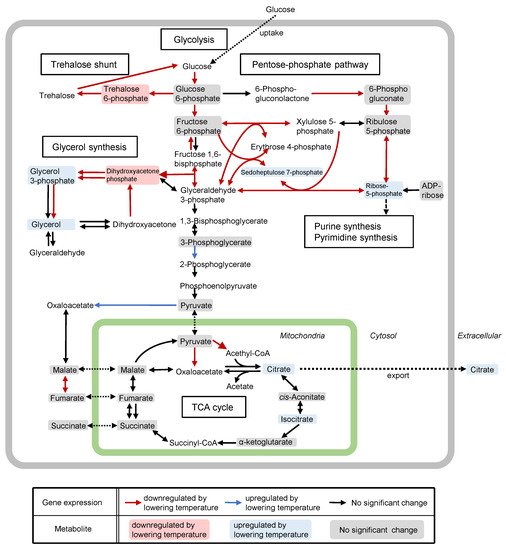 Compared to the other white spirits, honkaku shochu has been found to have a milder flavor profile due to its high content of higher alcohols and low boiling esters, as well as low levels of acetic acid, ethyl acetate, and acetaldehyde [8]. Moreover, because of mild and free of miscellaneous flavors, honkaku shochu enables to perceive the variety of flavors that arise from the different regions where it is produced and the different production methods. The following three factors greatly influence its diverse flavors: (i) the main ingredients, such as rice, barley, and sweet potato, used as the fermentation substrate; (ii) selection of the microbial species used; and (iii) the fermentation and distillation methods.

The characteristic flavor components derived from the main ingredients that have been well researched include alkyl furans (2-methylfuran, 2-ethylfuran, and 2-pentylfuran) in barley-based shochu [9] and terpenes ( linarol, α-terpineol, citronellol, and geraniol), rose oxide, methyl benzoate, β-damasenone, i-eugenol, β-ionone, and ethyl cinnamate in shochu made from sweet potato [10][11]. In the case of shochu made from buckwheat, ethyl cinnamate was found to be one of the characteristic flavors, although it was also found in sweet potato shochu and rice shochu [12].

1-octen-3-ol is produced as a by-product during the biosynthesis of oxylipin, which is an oxidized fatty acid involved in the regulation of fungal development. Theppogenes have been characterized inA. luchuensis, demonstrating that PpoC plays a significant role in the production of 1-octen-3-ol during thekojimaking process. A. luchuensisproduces ferulic acid (FA) esterase to cleave FA from FA-conjugated hemicellulose in rice grains. During distillation, 4-VG is further transformed by abiotic oxidization to yield vanillin.

In addition, research on yeast, microbial species that affects the flavor of honkaku shochu, is underway. Phylogenetic analysis ofS. cerevisiaestrains used for the making of shochu and awamori showed that they are phylogenetically close to sake yeast strains, but are still distinct groups [13]. Thus, a comparative genomic study of shochu and sake yeasts might enhance our understanding of the genetic features of shochu yeast. Currently, genome information of the shochu yeastsS.

In recent years, the profiling of shochu flavors has been vigorously pursued, with reports on the evaluation and classification of sensory characteristics of ingredients in barley-based honkaku shochu [15], and the creation of flavor wheels for the flavor components of awamori [16].