Traumatic brain injury (TBI) is defined as an injury caused by an external force that results in the disruption of normal brain function. In the United States, between 2016–2017, there were approximately 451,000 cases of TBI that resulted in hospitalization. The most common mechanisms of injury contributing to TBI were unintentional falls and motor vehicle crashes.

Traumatic brain injury (TBI) is defined as an injury caused by an external force that results in the disruption of normal brain function. In the United States, between 2016–2017, there were approximately 451,000 cases of TBI that resulted in hospitalization. The most common mechanisms of injury contributing to TBI were unintentional falls and motor vehicle crashes [1]. Following a severe TBI, disorders of consciousness (DoC) are common sequela [2][3]. Clinical features correlated with prognosis include age and severity of the TBI [2][4][5][6][7]. In several studies, there is an inverse correlation between the probability of recovering from a DoC and the duration after the injury [5][6][8]; however, some recovery has been observed in patients years after the initial injury [3][9]. The integrity and function of various neural structures and their relationship to consciousness are crucial for predicting outcomes and treating patients [10][11].

Consciousness, in its most basic sense, is defined as being awake and responsive to stimuli. The systems in the brain responsible for consciousness mediate sensory, motor, memory, and emotional functions that give rise to one’s perceptions and emotions [12][13]. Levels of consciousness are generally assessed via three parameters: alertness, awareness, and attention. Alertness requires function of the ascending reticular activating system (ARAS) circuit involved in the sleep-wakefulness cycle and enables the individual to be receptive to stimuli [5][6][14]. Awareness requires function of sensory and motor cortical regions and circuits to enable perception of and response to stimuli [15][16]. Attention requires those same circuits and regions plus processing in the frontoparietal cortex, amygdala, and hippocampus which give rise to perceptions and feelings experienced by the individual (Figure 1) [17]. 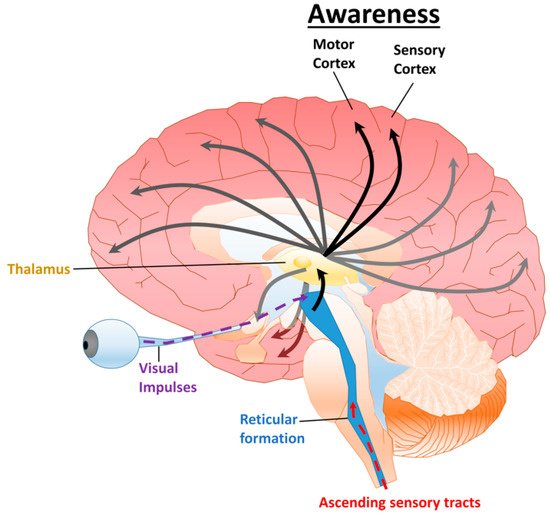 Figure 1. Diagram of the ARAS and cortical projections. The ARAS is composed of a network of neurons connecting the reticular formation, hypothalamus, and thalamus, which have widespread projections to various cortical regions. A variety of stimuli including visual and somatosensory (pain, touch, and temperature) excite the reticular activating system, generating arousal. Projections to the sensory and motor cortex are requisite for awareness. Additional connections to the frontoparietal cortex, amygdala, and hippocampus contribute to attention.

Consciousness can be disrupted by pharmacological agents such as anesthetics or by brain injury. In both cases, there is a lack of subjective experience. Numerous etiologies can cause disorders of consciousness including: TBI, hypoxic-ischemic encephalopathy from cardiac arrest, ischemic stroke, hemorrhage (intracerebral, subdural, epidural, subarachnoid), seizures, toxic-metabolic insults, and metabolic abnormalities. Compared to TBIs, several of these etiologies including ischemic stroke and hypoxic-ischemic encephalopathy follow predictable patterns which allow for improved prognostication [3][18]. DoCs are generally classified as acute (within the first 28 days) or chronic (persistent) [19][20].
Five levels of DoCs are generally used within the clinical setting: brain death, coma, vegetative state/unresponsive wakefulness syndrome (VS/UWS), minimally conscious state minus (MCS–), and minimally conscious state plus (MCS+) (Table 1). Accurate prognostication is crucial, because withdrawal of life-sustaining therapies is the leading cause of death for patients with acute TBI [21][22]. Both brain death and coma are acute diagnoses, with coma generally lasting no more than two to three weeks [20][23]. Brain death is the irreversible cessation of clinical brain functions, including the capacity to regulate respiratory and vegetative function, which is diagnosed using a series of tests known as the brain death examination. For children, this examination is performed twice before withdrawal of life sustaining therapies [23][24][25]. Coma is clinically defined as the complete absence of arousal or awareness [26], although some patients have described experienced awareness during the comatose state upon recovery. Unless the ARAS is severely injured, function generally returns within two to three weeks, at which time the vegetative systems that control the sleep-wake cycle, breathing, digestion, and basic motor reflexes begin functioning [27]. This clinical presentation is the VS/UWS, wherein the patient is alert but is not capable of attention or awareness [20]. Clinically, the VS/UWS is considered persistent one month after diagnosis [5][6][7]. Unlike coma and VS/UWS, the minimally conscious state (MCS) often includes impaired awareness and attention, as well as inconsistent responses that are consciously driven [9]. The first clinical signs to occur are generally visual pursuit and command following [11]. This category is further subdivided into without language (MCS–), or with language including command-following, intelligible verbalization, and/or intentional communication (MCS+) [4][28][29][30].
Table 1. Comparison of some clinical features in disorders of consciousness.
a Vegetative responses may be elicited by stimuli. b Comatose patients have occasionally noted being aware after recovery. c Patients may make respiratory efforts. d Artificial ventilation may be used for support. Vegetative state/unresponsive wakefulness state (VS/UWS), minimally conscious state minus (MCS−), minimally conscious state plus (MCS+).

Diagnosing DoCs after traumatic brain injury is crucial for appropriate treatment. The process begins with a standard neurological examination assessing consciousness; response to auditory, visual, and tactile stimulation; and assessment of pupillary and corneal reflexes. Additional clinical screens [31] can include computed tomography (CT) perfusion to assess brain death [23], diffusion tensor tractography (DTT) to evaluate the ARAS in the live human brain [32], functional magnetic resonance imaging (fMRI) and electroencephalography (EEG) responses to detect higher order cortical function [33][34][35], and positron emission tomography (PET) and fMRI to identify brain activity in individuals diagnosed as unresponsive [19][36].
Several clinical scoring systems are used to determine levels of consciousness and disability (Table 2) [37]. The Coma Recovery Scale-Revised (CRS-R) is the gold-standard behavioral assessment, with a modified version for pediatric patients [38][39]. It consists of six categories that assess arousal as well as auditory, visual, motor, and communication functions. The score range is 0 to 23, with higher scores associated with higher function. Scores do not directly correspond to DoC diagnoses, but certain responses are associated with MCS−, MCS+, and emergence from MCS (Table 3) [4][8][40]. The Glasgow Coma Scale (GCS) is also used in a number of studies addressed in this review [2][23][32][33]. This scale consists of three components: eye opening, motor, and verbal responses with scores ranging from 3–15 (Table 2). There is substantial overlap in scores between DoCs, thus scores do not directly correspond to DoC diagnoses. A newer version, The Glasgow Outcome Scale Extended-Revised (GOSE-R) has been proposed to address difficulties in separating out MCS− and MCS+ [2][32][41]. Due to the time and training requirements for the CRS-R, the Simplified Evaluation of CONsciousness Disorders (SECONDs) was recently developed to provide a similar evaluation in ~5 min, which enables easy adaptation to emergency and critical care settings. SECONDs evaluates six mandatory items and two conditional items and provides a score ranging from 0–8 that corresponds with the patient’s DoC diagnoses (Table 2 and Table 3) [42][43]. The Disability Rating Scale (DRS) assesses eight items with scores ranging from 0–29, with 12–21 corresponding with MCS and 22–29 with VS/UWS and coma (Table 2 and Table 3) [2][4][9][29][44][45]. Notably, there are numerous other assessments which evaluate similar properties not covered in this review [37].
Table 2. Select clinical scoring systems for determining levels of consciousness and disability.
* Conditional Items.
Table 3. Clinical scoring system relation to DoC diagnoses.

Currently, there are no United States Food and Drug Administration (FDA)-approved pharmaceuticals for the treatment of TBI. Pathologically, TBI follows a biphasic pattern consisting of the primary structural injury followed by a secondary injury cascade. Primary injuries include cerebral contusion, blood vessel damage, blood brain barrier disruption, axonal shearing, and neuronal apoptosis. The secondary injury cascade includes inflammation, edema, changes in cerebral circulation, glutamate toxicity, mitochondrial dysfunction, and increased reactive oxygen species (ROS) production. In 2019, the FDA fast-tracked NeuroSTAT (cyclosporine; NeuroVive Pharmaceutical) for the treatment of moderate-to-severe TBI by inhibiting mitochondrial permeability transition pore (mPTP), which is indicated in the secondary injury cascade [46]. Notably, if approved, this treatment will only be effective during the early acute injury phase. Amantadine is safe and has shown some accelerated recovery in studies of acute and subacute DoCs due to TBI [47][48][49], but with variable effectiveness [50][51]. Like amantadine, apomorphine has effects on the dopaminergic system. A case study and a pilot study with apomorphine described a spontaneous awakening phenomenon [52][53], and a controlled study has been proposed to evaluate its safety and effectiveness [54]. During the chronic phase post-TBI, case reports on zolpidem have indicated a paradoxical ability to improve consciousness [55][56]. An EEG study suggested it acts on cortical, striatal, and thalamic neuronal populations to potentially produce this spontaneous awakening phenomenon [57]. Controlled studies have shown zolpidem to be safe, but again showed variable effectiveness [58][59][60][61]. Lorazepam was also shown to be safe, albeit ineffective in a single study for TBI, but showed some effectiveness for patients with anoxic brain injury [61]. Together, these results suggest potential pharmaceutical options for acute, subacute, and chronic DoCs, with reasonable safety profiles but variable effectiveness.

Electroceuticals utilize electrical impulses, the nervous system’s primary language, to treat disease. In general, electroceuticals consist of a power source that provides electrical stimulation to electrodes, which then deliver these impulses to targeted cells or tissues [62]. A number of electroceuticals currently have therapeutic uses including pacemakers; cochlear implants [63]; vagus nerve stimulation for treatment of epileptic seizures and depression [64]; and deep brain stimulation for Parkinson’s disease, epilepsy, and other neurological disorders [65]. Although the first attempt at using electroceuticals to treat DoCs was in 1968 [66], progress was slow. With recent advances in imaging and assessment, a limited set of studies have evaluated electroceuticals for treating patients with TBI-induced DoCs [67].