The dermis is primarily composed of the extracellular matrix (ECM) and fibroblasts. During the aging process, the dermis undergoes significant changes. Collagen, which is a major component of ECM, becomes fragmented and coarsely distributed, and its total amount decreases. This is mainly due to increased activity of matrix metalloproteinases, and impaired transforming growth factor-β signaling induced by reactive oxygen species generated during aging. The reduction in the amount of collagen hinders the mechanical interaction between fibroblasts and the ECM, and consequently leads to the deterioration of fibroblast function and further decrease in the amount of dermal collagen. Other ECM components, including elastic fibers, glycosaminglycans (GAGs), and proteoglycans (PGs), also change during aging, ultimately leading to a reduction in the amount of functional components. Elastic fibers decrease in intrinsically aged skin, but accumulate abnormally in photoaged skin. A reduction in the levels of functional dermal components results in the emergence of clinical aging features, such as wrinkles and reduced elasticity. Various antiaging approaches, including topicals, energy-based procedures, and dermal fillers, can restore the molecular features of dermal aging with clinical efficacy.

The skin has three layers: The epidermis, dermis, and subcutaneous tissue. With the aging process of the skin, these three components undergo degenerative changes, and changes to the dermis are the most obvious. Skin aging can be classified into two categories: Intrinsic and extrinsic [1]. Intrinsic aging occurs with advancing age and is characterized by fine wrinkles and a thinning epidermis [2][3][4]. In contrast, extrinsic aging is characterized by deep wrinkles, skin laxity, and hyperpigmentation, and is mainly caused by chronic sun exposure [5][6]. Regardless of aging type, wrinkles and reduced elasticity are typical phenomena of skin aging and the result of progressive atrophy of the dermis [7]. One of the main mechanisms of dermal atrophy is thought to be a reduction in the amount of extracellular matrix (ECM), particularly collagen in the dermis [8]. In aged skin, the production of collagen decreases and its degradation increases, which leads to an overall reduction in collagen amount [3][9][10]. Most antiaging approaches target and aim to reverse this process. Structural changes in the collagen and other ECM proteins are also involved in dermal aging.

2. Composition of the Dermis

Unlike the epidermis, which is made up of dense keratinocytes, the dermis is comprised primarily of an acellular component, the ECM. Collagen fibers are a major component of the ECM, accounting for 75% of the dry weight of skin, and provide tensile strength and elasticity. In human skin, type I collagen makes up 80 to 90% of the total collagen, while type III makes up 8 to 12%, and type V makes up <5%. Normally, the collagen bundles increase in size deeper in the dermis.
Elastic fibers are another fibrous element that make up the dermal ECM. Elastic fibers return the skin to its normal configuration after being stretched or deformed. The other components of the ECM are proteoglycans (PGs) and glycosaminoglycans (GAGs), which are amorphous and surround and embed the fibrous and cellular matrix elements in the dermis. Although they only make up 0.2% of the dry weight of the dermis, they absorb water up to 1000 times their volume, and have roles in the regulation of water-binding and compressibility of the dermis.
Fibroblasts are dermal-resident cells, and are differentiated from mesenchymal cells. They are responsible for the synthesis and degradation of fibrous and amorphous ECM proteins. Their function and interaction with the environment are important to understand the molecular mechanism of dermal aging. Other cellular components of the dermis include immune cells like histiocytes, mast cells, and dermal dendrocytes, and endothelial cells and skin appendages, which are beyond the scope of this review.

3. Changes in Dermal Components with Aging

Quantitative and structural changes in collagen fibers are the major modifications found in aged skin [11][12][13]. In contrast to those in young skin, which has abundant, tightly packed, and well-organized intact collagen fibrils, collagen fibrils in aged skin are fragmented and coarsely distributed [12][14]. Previous studies have shown that increased collagen degradation and reduced collagen biosynthesis are both involved in this aberrant collagen homeostasis, which results in a net collagen deficiency (Figure 1) [11][15][16]. This process leads to clinical changes, such as skin wrinkling and loss of elasticity, which are observed in both naturally and photoaged skin [11][17]. 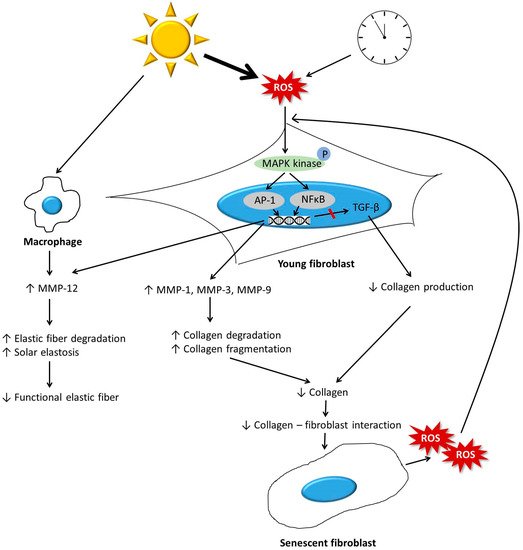 3.2. Changes to other ECM Components

Elastic fibers play an important role in skin compliance (ability to be readily deformable) and resilience (ability to recoil), which together are often referred to as skin elasticity [18][19][20]. In the dermis, they are produced mainly by fibroblasts [21]. Elastic fibers are formed from soluble tropoelastin molecules, an elastin precursor, via cross-linking by lysyl oxidase (LOX) [22][23]. They consist of elastic microfibrils (such as numerous proteins such as fibrillin, fibulin, and microfibrillar-associated glycoproteins (MAGPs], and latent TGF-β -binding proteins (LTBPs)) and amorphous elastin [24][25][26]. In young skin, the elastic fibers adopt a characteristic highly ordered architecture, with perpendicularly oriented fibrillin-rich microfibrils at the papillary dermis and large-diameter elastic fibers in the reticular dermis, comprised primarily of elastin [27].
During the aging process, the elastic fiber system undergoes structural changes. In intrinsic skin aging, fibrillin-rich microfibrils in the papillary dermis are selectively degraded. Fibulin-5 plays an important role in the association of tropoelastin, a precursor of elastin, with microfibrils, to form elastic fibers [28]. There is evidence that fibulin-5 is related to elastic fiber remodeling in intrinsic skin aging [18][29]. In young photoprotected skin, fibulin-5 is localized to the elastic fiber throughout the dermis; however, in aged skin, this pattern of fibulin-5 is completely abolished. In contrast to intrinsic aging, photoaging is characterized by accumulation of disorganized elastic fibers throughout the dermis in a process termed “solar elastosis” [20]. The main mechanism responsible for increased elastic fiber degradation in photoaging is the activation of MMPs [11]. MMPs-2, -3, -9, -12, and -13 are capable of catabolizing elastic fibers [30][31]. MMP-12, also known as human macrophage metalloelastase, is the most active protease in elastin degradation (Figure 1) [32]. Chung et al. demonstrated that the induction of MMP-12 gene and protein expression caused by UV radiation contributed to the development of solar elastosis in human skin [33]. In addition, Imokawa et al. also showed that repetitive UV radiation at suberythemal doses induced upregulated activity of skin fibroblast-derived elastase and impairment of elastic fiber configuration, and the subsequent loss of skin elasticity [34]. In photoaged skin, replenishment of the degraded matrix also decreases. Weiss showed a reduction in elastin production with age, or as a result of photodamage. Cenizo et al. reported that the expression of LOX and LOX-like enzymes decreased with aging, resulting in a reduction in the assembly of new elastic fibers [35]. Solar elastosis is characterized by an increase of elastic material in the dermis, which seems to be a paradoxical situation. However, the coarse and disoriented fibers observed in solar elastosis are essentially nonfunctional [21]. In summary, with aging, the number of functional elastic fibers is reduced, and this is related with functional changes in aged skin such as loss of elasticity and wrinkle formation [20].

Glycosaminoglycans (GAGs) are large linear polysaccharides, and are a major component of the ECM. There are six types of GAGs, including chondroitin sulfate (CS), dermatan sulfate (DS), keratan sulfate (KS), heparan sulfate (HS), heparin (HP), and hyaluronic acid (HA) [36][37][38]. Except HA, GAGs contain sulfate substituents at different positions on the chain, and are heavily glycosylated on their related proteoglycan (PG) core proteins [38]. HA is not sulfated and does not attach to proteins to form proteoglycans. Instead, it binds to proteins containing HA-binding domain [38]. Because GAG chains contain numerous negatively charged carboxyl and sulfate groups, they may have important roles in maintaining the water content in tissue. Crosslinking of HA with matrix proteins such as the collagen network results in the formation of supermolecular structures and increases tissue stiffness [39].
Dermal HA is mainly produced by fibroblasts, and it is abundant in the papillary dermis [37]. It crosslinks with other ECM proteins, like collagen, resulting in increased tissue stiffness, and plays space filling and shock-absorbing roles [39]. In intrinsically aged skin, HA binding proteins (HABPs) are reduced compared with in young skin, while the level of HA itself is not significantly different between young and old skin [40][41]. HABPs are known to trigger several intracellular signaling pathways regulating proliferation, migration, and differentiation [42]. In contrast, dermal HA content in photoaged skin is significantly increased, particularly in regions of solar elastosis [42]. Although UV irradiation induces HA synthase (HAS) [37][43], HAS mRNA levels in aged sun-exposed skin were significantly reduced compared to those in sun-protected skin, indicating the possibility of unknown regulatory mechanisms at work [38][44]. Like solar elastosis, increased HA in photoaged skin might be the result of abnormal accumulation of nonfunctional proteins.
In a previous study, total sulfated GAGs were found to be decreased during intrinsic aging [41]. However, these changes may be specific to each type of sulfated GAGs: HS and CS decrease, while KS and DS increase [38]. In photoaged skin, total sulfated GAGs increased, similarly to HA [41]. CS staining increased in the solar elastosis region [42]. Further investigations are necessary to reveal the changes to specific sulfated GAGs, and the underlying mechanisms.

PGs are a family of GAG conjugated proteins, and are essential for maintaining the mechanical strength of the skin [45]. Previous work has shown that decorin, biglycan, and versican are the most abundant proteoglycans in human skin. Decorin and biglycan are core proteins of DS, while versican is a core protein of CS. Several previous studies have investigated changes to these major PGs in intrinsically aged skin, with results varying depending on the location, gender of the subjects, and detection methods [38]. In photoaged skin, versican seems to be increased, while biglycan does not change, and decorin is absent [38][46]. There are complex mechanisms regulating these changes in PGs with aging, and further investigations are warranted.

In intrinsic aging, the amount of elastic fibers is reduced; however, in extrinsic aging, nonfunctional, abnormal elastic fibers accumulate in the papillary dermis (Table 1). Changes to the amount of GAGs and PGs vary in intrinsically aged skin, but these components generally increase with aging, with the exceptions of decorin and biglycan in photoaged skin (Table 1). Any increase observed in photoaged skin seems to be the result of abnormal accumulation or through compensational recovery responses for cumulative damage to the ECM [38].
Table 1. Changes in dermal extracellular matrix components in the aging process.

Antiaging strategies have been developed with the stated aim of achieving a young and healthy skin. Here, currently widely used antiaging approaches with demonstrated dermal rejuvenation and the associated molecular mechanisms will be reviewed briefly (Table 2).
Table 2. Mechanisms of action and clinical efficacies of representative antiaging approaches.