Citral itself has a generally recognized as safe (GRAS) listing by the United States Food and Drug Administration (FDA), whereby when added to food, it is considered safe by experts. Hence, lemon myrtle oil has been used for citral applications and added as a flavoring and scenting agent to foods, cosmetics, aromatherapy massage oils and various household products (such as detergents, soaps, air fresheners, and insect repellents) to give a lemon or verbena scent. Citral is also an excellent starting material for the synthesis of vitamin A and the valuable fragrant ionones.

There are many natural sources of lemon oil or lemon scent. According to a recent ISO Strategic Business Plan [1], the top production of lemon oils comes from lemon (7500 tonne), Litsea cubeba(1700 tonne), citronella (1100 tonne) and Eucalyptus (now Corymbia) citriodora(1000 tonne). Lemon oil itself, cold pressed from the peel of Citrus limon L., Rutaceae, contains 2–3% of citral (geranial + neral) [2][3][4], the lemon flavor ingredient. Consequently, the oil, along with numerous other citrus species, is used more for its high limonene (60–80%) and minor component content as a fragrance, health care additive [5] or solvent rather than a citral lemon flavor.

The major components of the leaf essential oil of B. citriodora are shown in Table 1, Figure 1 and Figure 2. Initially thought to be one compound, the major component was called citral because of its lemony aroma and flavor. This terpene aldehyde was found to be a mixture of the two geometric isomers neral 9 (IUPAC Name: (2E)-3,7-dimethylocta-2,6-dienal), and geranial 10 ((2Z)-3,7-dimethylocta-2,6-dienal) also known as citral a and citral b, respectively in the ratio of 1.2–1.5, as shown in Table 1[10]. 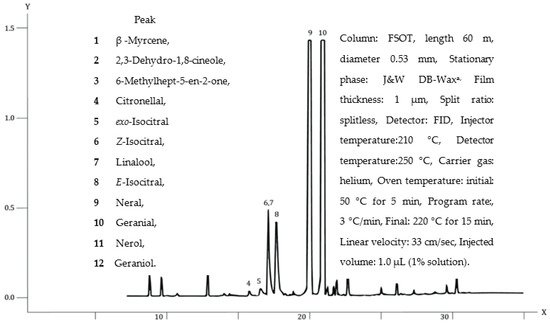 Figure 2. Gas chromatographic trace of B. citriodora oil on a polar column.
Table 1. The percentage proportion ranges for key constituents in the essential oil of the citral chemotype of Backhousia citriodora.
a tr = traces < 0.01%. b Total citral is the addition of all five citral isomers. c On non-polar gas chromatography (GC) column stationary phases, nerol often co-elutes with neral.

B. citriodora components were determined by gas chromatography using flame ionisation detection (GCFID) and gas chromatography–mass spectrometry (GC–MS). These isomers of citral seem to always co-exist with citral and are thought to be oxidative, thermal or acid/base rearrangement artefacts of citral sourced either naturally or synthetically [8][13][14][15]. A published patent reported the purification of citral by fractional distillation in a controlled acidic environment (pH 3–7). This procedure reduced the formation of iso-citrals [16].

With gas chromatography (GC), the preferred analytical method for determining essential oil quality, the choice of solvent for injection of aldehyde-rich oils such as B. citriodora is important. Alcoholic or ketonic solvents such as ethanol or acetone are unsuitable because of their tendency to form acetals and ketals if left in these solvents for a length of time [17]. This was also seen in the analysis of cinnamaldehyde from Cinnamomum species using methanol as a solvent [18].

An increasing amount of data is now being published affirming the popularity of lemon myrtle as a complimentary medicine [19][20].

Many anecdotal reports of bioactivity are now being confirmed by in vitro and in vivo investigations. The Australian Therapeutic Goods Administration (TGA) is reported to have approved threeB. citriodoraessential oil medicines by 2006 [21] and by 2017 expressed an awareness of the increasing number of products containing citral [20].

The leaf paste has been confirmed for its antimicrobial and antifungal properties against many microbes including Clostridium perfringens, Pseudomonas aeruginosa, and a hospital isolate of methicillin-resistant Staphylococcus aureus(MRSA) [23][24]. Three others found the oil/extract to also be an effective antibacterial and antifungal agent against (a) food pathogenic bacteria and food spoilage yeasts [25], where damage of the yeast cell membrane through penetration caused swelling and lysis, leading to cell death; (b) against food-borne pathogens [26], where MIC values againstS. aureus and Escherichia coli were 16- and 8-fold, respectively, better than tea tree oil; and (c) against the plant postharvest pathogen Monilinia fructicola[27], where in vitro inhibition of spore germination and mycelial growth was recorded.

Antiviral activity has been recorded in a clinical trial in treating Molluscum contagiosum, a skin virus causing pearly, flesh-coloured, dome-shaped papules with central umbilication frequently among children [28][21]. The trial showed that at the end of 21 days, there was a more than 90% reduction in lesions in 9/16 children treated with lemon myrtle oil.

Anti-inflammatory and antioxidative properties have also been investigated [29][30]. Lemon myrtle extract (LME) inhibited the production of inflammatory mediators such as nitric oxide (NO). Enzyme-linked immunosorbent assay and reverse-transcriptase polymerase chain reaction (RT-PCR) revealed that pretreatment with LME suppressed the protein expression and mRNA levels of pro-inflammatory cytokines such as interleukin IL-6, and tumor necrosis factor (TNF)-α in a concentration-dependent manner, respectively. This activity suggested that lemon myrtle extract could be used as a potential therapeutic agent with potent anti-inflammatory effects that could be used to treat inflammatory bowel disease.

In another study, the efficacy of lemongrass (Cymbopogon flexuosus) essential oil and its bioactive part citral against dual-species biofilms formed by Staphylococcus aureus and Candida species was evaluated in vitro [31]. Biofilm staining and viability tests showed both lemongrass essential oil and citral were able to reduce biofilm biomass and cell viability of each species in the biofilm.

In addition, it has been suggested that lemon myrtle extract is suitable for use in ocular health nutritional products, not because of the presence of citral in the extract, but because the extract is a source of lutein and other antioxidants along with folate and the trace minerals, magnesium and calcium [29][32].

Studies with insects have shown that effective insect repellents based on natural active ingredients can deliver repellency on par with synthetic actives in the field. For example, Greive et al. [33] showed in preliminary studies that lemon myrtle oil has insect deterrent activity. Repellency of 82% was recorded againstAedes aegyptimosquitoes for 30 min in laboratory tests, with greater efficacy (97%) achieved when mixed (1:5) with Melaleuca ericifolia oil, a source of linalool.