17O is the one of the naturally occurring stable isotopes of oxygen, and also it has the lowest abundance, 0.038%(). The distribution of isotopes in hydrological systems is controlled by isotope fractionation processes. Oxygen isotopes fractionate through mass-dependent isotopic fractionation, which includes kinetic processes, isotopic exchange reactions, and physicochemical phenomena (diffusion, condensation, and evaporation).

Two elements-oxygen and hydrogen, in water molecule with their stable isotopes ( 16O, 17O, 18O, 1H, and 2H or D) and their ratios (most commonly D/H or 18O/ 16O) have been widely used as hydrological or climatological tracers because of their sensitivity to environmental conditions during the evaporation, condensation, melting, and freezing of water [1][2][3][4][5][6]. Generally, lighter isotopes ( 1H, 16O, and 17O) are more likely to evaporate into the gas phase, while heavier isotopes (D and 18O) tend to condense into the liquid or solid phase. Furthermore, the oxygen (expressed as δ 18O) and hydrogen (expressed as δD) isotopic ratios in precipitation are linearly correlated and this relationship is expressed by the Global Meteoric Water line (GMWL) [7]. Changes in the isotopic compositions generally represent the dependence of spatial factors (latitudinal, continental, altitude, and seasonal effects), and deviations from the GMWL at a specific location indicate the climate and environmental conditions [2][8].

Isotopic values have been extensively used in many studies to investigate moisture transport, air mass circulation, precipitation patterns [3][9][10][11], snow hydrology, water movement and balance [12][13][14][15] and the atmospheric water cycle through simulations based on isotope-enabled models [16]. The most depleted isotopic values are observed in polar precipitation, which is formed from cold air masses, and seasonal high and low values are observed, especially in coastal regions [2][4][5]. Thus, isotopic records of polar precipitation (accumulated layers of snow) are used for ice core age dating and as an important indicator of past climate and environmental changes [4][5][7][16][17][18][19][20]. Moreover, in temperate regions, isotopic signals in permafrost (ice wedges) are considered as a paleoclimate tracer [21][22].

In the triple oxygen isotope system, 17O is the one of the naturally occurring stable isotopes of oxygen with the lowest abundance (0.038%) [23][24], and the enrichment of H 217O in water is about half that of H 218O [1]. With the growing interest and recent developments in analytical instruments, it has become possible to measure small variations of 17O in meteoric waters, terrestrial rocks, and minerals [25][26][27]. A mass-dependent between the ratio of 17O/ 16O and 18O/ 16O is less sensitive to temperature, and hence, it is a useful indicator of the kinetic fractionation process. Many studies have used 17O as a proxy for certain conditions (relative humidity and wind speed) in the moisture source region [10][11]. The relative abundance of 17O in meteoric water is preferentially reported in terms of 17O-excess [17O-excess = ln(δ 17O + 1 ) − 0.528×ln(δ 18O + 1)][26]. 17O-excess is an effective parameter for investigating the global hydrological cycle, especially for studying the changes in the relative humidity in the oceanic source region and diffusion-induced kinetic fractionation process [9][10]. Compared with the relative excess of deuterium, which is termed d-excess (d-excess = δD − 8 × δ 18O) and which is widely used as an indicator of kinetic fractionation processes [28][29][30][31][32], 17O is less dependent on the temperature at evaporation and condensation sites [33]. Thus, the use of 17O-excess in combination with δ 18O and d-excess provides a potential means to unravel the effect of kinetic fractionation during evaporation at the moisture source, along the transport path, and during the condensation of precipitation [8][10][28][33]. Moreover, supersaturation conditions and cloud ice crystal formation in polar regions are influential in the 17O composition [30][34].

Although there have been numerous studies on the use of this rare isotope for investigating the water cycle, the processes controlling the spatiotemporal distributions of 17O in the fundamental hydrological cycle are still not well understood [35][36] and more data is required, particularly on less evaporated water bodies (river, precipitation) [36][37]. Aron et al. [36] proposed the introduction of multiple meteoric water lines in the expression for the variation of 17O-excess to indicate the importance of regional or local effects on the 17O pattern. Tian et al. [37] also provided evidence that the 17O-excess distribution indicated local climatic and geographical conditions rather than general large-scale spatial patterns. Surma et al. [38] mentioned the need to broaden the spatial coverage and long-term observations for refining the global monitoring network and to enable better prediction by the general circulation model. In this review, we introduce the potential applications of 17O into the hydrological cycle by summarizing the published literature on 17O-based studies of the hydrological cycle. This paper is organized as following. Section 2 introduces the general definition and isotopic fractionation of 17O and analytical methods (dual-inlet isotope ratio mass spectrometry and laser absorption spectroscopy) for measuring the 17O. Section 3 summarizes the published 17O isotopic values for different sample types and describes the main findings of previous studies. Finally, on the basis of the implications of previous studies, future research needs are highlighted.

17O is the one of the naturally occurring stable isotopes of oxygen, and also it has the lowest abundance, 0.038% [23] ( Table 1 ). The distribution of isotopes in hydrological systems is controlled by isotope fractionation processes. Oxygen isotopes fractionate through mass-dependent isotopic fractionation, which includes kinetic processes, isotopic exchange reactions, and physicochemical phenomena (diffusion, condensation, and evaporation) [1][28]. Moreover, non-mass-dependent fractionation can be induced by chemical effects [39].

Here, λ ref is the slope of the δ′ 17O–δ′ 18O line. 17O-excess indicates the relative excess of 17O in meteoric waters compared with ocean water. In the equation, δ′ is the logarithmic term of δ and is expressed as δ′ = ln(δ + 1); it linearizes the exponential relationship between isotopic compositions [40]. The parameter 17O-excess is very small, and it is multiplied by 10 6 and expressed in units of per meg (1 per meg = 0.001%). The magnitude variation in the line δ′ 17O–δ′ 18O is very small (the difference between θ eq and θ diff corresponds to very small magnitudes of δ′ 17O and δ′ 18O, and it is commonly described by the 17O-excess-δ′ 18O line) [36]. 17O-excess represents the mass-dependent deviation from the reference relationship [41]. Luz and Barkan [26] reported the reference relationship as a meteoric water line that was plotted with a slope of 0.528. Thus, 17O-excess indicates the magnitude of deviation from this reference line.

An isotope ratio mass spectrometry (IRMS) with fluorination reaction, for converting water to O 2 with CoF 3, was developed by Baker et al. [42]. In the earliest studies, water was converted to O 2 gas, based on electrolysis using CuSO 4 [43] and fluorination using BrF 5 [44]. Baker et al. ’s [42] method was modified by Barkan and Luz [45], and it is commonly used for the measurement of water isotopes with high precision [26][46][47][48][49]. Affek et al. [50] modified and proposed an approach to measure oxygen isotopes of CO 2 equilibrated with water, based on the isotopic exchange at steady state between O 2 and CO 2 [51]. Recently, laser absorption spectroscopy has been developed, and it allows less laborious, simultaneous and direct measurements of water isotopologues [36][52].

3. Use in Hydrological Studies

Small variations in the 17O/ 18O relationship can result from mass-dependent equilibrium (fractionation caused by different saturation vapor pressures) and kinetic fractionation processes (fractionation induced by different diffusivities of water vapor isotopologues) [33]. The parameter 17O-excess provides information about moisture transport and conditions (relative humidity and wind speed) in the moisture source region [7][35], and it is known to be primarily sensitive to relative humidity and less sensitive to temperature and Rayleigh distillation during moisture transport and precipitation. There are several controlling factors for the 17O-excess pattern, including the moisture source, mixing of water vapor, rain re-evaporation (mostly in low and mid-latitudes) and supersaturation (at low condensation temperatures) [55]. Although the 17O-excess in precipitation is primarily interpreted as indicating variations in the relative humidity in the moisture source regions, precipitation in polar and dry regions suggests the importance of fractionation by snow formation and raindrop re-evaporation processes.

For water vapor, 17O-excess increases with kinetic fractionation [28]. Kinetic fractionation during the condensation of water vapor to ice in high-latitude precipitation can also be described by the 17O-excess together with the d-excess [33]. A schematic of δ′ 17O and δ′ 18O behavior is shown in Figure 1 . Evaporated vapor from seawater diffuses through an unsaturated atmosphere, increasing the partition of 17O. 17O-excess decrease in condensed vapor (precipitation). Post-condensation evaporation will increase 17O-excess in evaporated vapor and decrease 17O-excess in residual evaporated water. 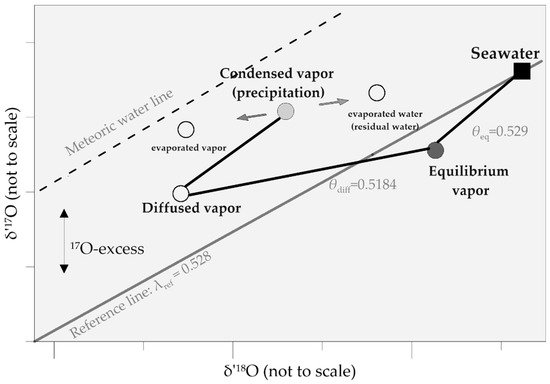 Figure 1. Schematic of δ′17O and δ′18O fractionation in the hydrological cycle. This figure is a simplified modification of the descriptions from Luz and Barkan [26] and Aron et al. [36].

Meteoric waters are generally in agreement with the slope of 0.528 [39][56], which is close to the equilibrium fractionation exponent ( θ eq = 0.529) [45]. Re-evaporation of rain drops during warm precipitation and convective storms, and mixture of moisture are considered as the main processes behind the 17O-excess variation in low- and mid-latitude precipitation [55].

In a tropical region (Mpala in Kenya), Li et al. [57] found that the variation of 17O-excess in leaf water correlated with the relative humidity. This study mentioned the strong influence of the isotopic composition of ambient vapor with high relative humidity on the slope λ transpiration . Moreover, δ 17O values in leaf water showed a very large variation, and this was likely to indicate the response of δ 17O to the variation in the materials linked to leaf water (e.g., atmospheric CO 2, plant tissue, biomaterials that record animal body water).

With the recent analytical developments for measuring small variations in 17O in the triple oxygen isotope system, 17O has been used as a new tracer in studies on regional hydrology and surface hydrology, climate, and paleoclimatology. Dual-inlet isotope ratio mass spectrometry and laser absorption spectroscopy have been developed and commonly used to measure 17O. The reference relationship, with a slope of 0.528, was developed and, together with d-excess, it allows the separation of the effects of temperature and relative humidity in meteoric waters. 17O-excess is commonly used as a tracer for examining changes in relative humidity in the moisture source region, while the other influential processes are still being debated. While 17O-excess may be mainly influenced by the relative humidity in subtropical regions, in polar regions, especially in continental Antarctic sites, this influence is replaced by supersaturation effect, intrusion of stratospheric vapor input, post-depositional processes (local moisture recycling by sublimation), regional circulation patterns, sea ice concentration, and local meteorological conditions. At low and mid-latitudes, the 17O-excess pattern is mainly affected by changes in the moisture source, mixing of water vapor, re-evaporation of rain drops during warm precipitation, and convective storms. Thus, the spatiotemporal variation of 17O-excess is large and yet uncertain, indicating multiple meteoric water lines corresponding to the geographical location. Moreover, since the isotopic fractionation is complex in nature and since there is a lack of measurements compared to spatially large variations, more studies on isotopic composition of surface and subsurface samples, precipitation (convective), and water vapor are required. It is also necessary to provide isotope-enabled models with in situ measurements to perform accurate and robust simulations.