Energy storage system (ESS) and electric vehicle (EV) markets have been growing every year, and various types of energy storage devices are struggling to enter the market [1][2]. In particular, fuel cells (FCs), lithium-ion batteries (LIBs), and supercapacitors (SCs) are competing with one another in the EV market [3]. FCs have attracted a great deal of attention as energy conversion devices [4]. However, there remain difficulties in their commercialization based on the disadvantages associated with transporting, storing H 2, and the reluctance to establish H 2 stations [5][6][7]. Further, because of their narrow operating voltage (theoretically 1.23 V), a stacking process is essential for the application of FCs [8]. In addition, the reaction to convert hydrogen and oxygen into water is highly exothermic, thus FCs face heat management issues [9][10][11][12][13].

To overcome conventional electrolyte issues, many researchers have been focused on ionic liquids (ILs). At the early stage, ILs were studied as solvents. Generally, organic solvents used as reaction solvents in various chemical processes are highly volatile and explosive, and most of them are harmful to the human body [14]. Therefore, for developing environmentally friendly processes, many researchers are working on the development of next-generation solvents that can replace organic solvents.

Because of the advantages of the ILs, their market is steadily growing. The global IL market was estimated to be US $20 million by 2015, of which the solvent and catalyst market was the largest with US $6 million, and the market for ILs is expected to grow due to the expansion of the application field, particularly in the growth of the energy storage field. The application fields of ILs can be divided into solvents and catalysts, energy storage, separation and extraction, and biorefinery, and among these the energy storage field with high growth potential was examined [15].

Also, acronyms and properties of representative ILs are provided in Table 1 and Table 2 along with descriptions of ILs used in various fields of energy storage.

In 2010, Zaghib proposed [EMI][TFSI] as an additive to the electrolyte for LIBs, demonstrating an increase in the thermal stability of the electrolyte [16]. Chen et al. reported that bis(fluorosulfonyl)imide lithium salt ([LiTFSI]) and the [PP 13][TFSI] electrolyte significantly improve rate capacity and low temperature performance and are safer than conventional electrolytes [17]. In addition, inorganic alkali salts with relatively low melting points were used to improve the cycle stability and high performance of LIBs, even at high temperatures. For instance, Zhibin et al. found that dual-salt-mixed potassium bis(fluorosulfonyl)imide ([KFSI]) and [LiFSI] exhibited high ionic conductivity (10 −3 ~10 −2 S cm −1 ) from 40–150 °C [18]. In addition, designs for ionic structures and the addition of an additive to affect the properties of ILs were reported, as ILs are tunable with regard to polarity and basicity of acidity. For instance, [EMI][TFSI], [PMI][TFSI], and [BMI][TFSI] were selected as electrolytes and their electrochemical properties were investigated [19]. It was found that [EMI][TFSI] exhibited the best electrochemical performance and thermal stability. In 2009, Karna et al. synthesized several quaternary ammonium ILs based on cations with two identical ether groups and have studied quaternary ammonium-based ILs [20]. Yang et al. reported five low viscosity quaternary ammonium-based ILs [N 2(2o1) 3][TFSI], [(N 3(2o1) 3)][TFSI], [(N 4(2o1) 3)][TFSI]; these ILs were applied to LIBs. Among these IL electrolytes, [(N 2(2o1) 2(2o2)][TFSI] and [N 2(2o1) 3][TFSI] showed the best capacity and cycle characteristics at 0.1 C [21]. In 2014, Hirano et al. synthesized an organosilicon functionalized ammonium IL with an oligo (ethylene oxide) substituent. All ILs synthesized in this way contained large cations and had low viscosity (125–173 cP) at room temperature (RT) and showed superior thermal stability with higher decomposition temperatures (310–350 °C) and a 3.9 V–4.7 V stability window. However, they were not suitable for LIB electrolytes due to their low conductivity. Therefore, organosilicon functionalized ammonium ILs with an oligo (ethylene oxide) substituent were mixed with a commercial carbonate electrolyte to form a hybrid electrolyte. At a doping content of 30 vol%, the lithium iron phosphate (LFP) electrode/Li half-cell showed excellent reversible capacity, cycle stability, and effectively suppressed electrolyte degradation due to stable SEI formation, thus improving lithium storage performance [22]. In 2019, Hahime et al. reported that by replacing the conventional carbonate electrolyte with an RT quaternary ammonium-based electrolyte, [C 4mpyr][TFSI], decomposition of organic solvents was suppressed and short-circuiting caused by Li dendrite formation was prevented. In the above study, the authors investigated the morphology of Li electrodeposition obtained from the [C 4mpyr][TFSI] electrolyte and clarified the correlation between electrochemical parameters and Li deposition morphology. The surface resistance was temperature-dependent and also affected deposition polarizations and nucleation. As a result, to suppress the Li dendrite growth during cycling, the deposition polarization should be expanded during deposition while simultaneously increasing the Li diffusion coefficient of the electrolyte [23].

Recently, [Pyr 14], [Pyr 13], and [Pyr 15] were broadly studied for LIBs due to their high ionic conductivity and superior electrochemical performance [24][25][26]. The electrochemical performance of the LiNi 0.5 Co 0.2 Mn 0.3 O 2 (NCM 523)/graphite full cells was also studied by Paillard et al. These studies found that [Pyr 14][TFSI], [Pyr 14][DCA], and [Pyr 14][TFSAM] exhibited higher electrochemical performances than organic carbonate solvent-based electrolytes in NCM 523 and graphite full cells [27]. As the demand for energy storage devices increases, ILs with high stability, good cycle characteristics, and resistance to continuously changing temperatures have emerged. Since 2020, a method based on increasing salt concentration has been used with ILs. Qian et al. achieved high oxidation stability (>5.5 V vs. Li + /Li) for a graphite and Li metal anode by increasing the LiTFSI salt concentration to 4 M with [PfM pyr ][FSI], leading to superior electrochemical cycling stability [24]. Howlett et al. reported an LIB with a high energy density system that suppressed dendritic growth despite the fast charging rate by using LiFSI salt and [C 3mpyr][FSI]. Operating at high current densities increased coulombic efficiency up to 96% at 20 mA cm −2 with a 0.2 V polarization. A more detailed morphological study showed that sediment evolution remained dendrite-free and uniform with low electrode resistance ( Figure 1 ). X-ray photoelectron microscopy (XPS), time-of-flight secondary ion mass spectrometry (ToF-SIMS), and scanning electron microscopy (SEM) surface measurements revealed that a LiF-rich SEI layer with a lack of organic components was formed. Reduced dendrite formations at high current densities are further emphasized by a 500 cycle at 10 mA cm −2 using a porous separator in coin cell cycling [28]. Although the conductivity of these IL-based electrolytes is lower than that of conventional carbonate electrolytes (8–12 mS cm −1 ) , the overall performance of the full cell does not decrease much and is rather superior in terms of stability of the battery. 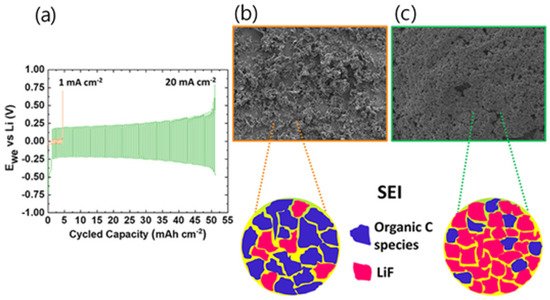 In 1979, after demonstrating the solubility of poly(ethylene oxide) (PEO) against lithium salts, solid polymer electrolytes (SPEs) became widely used in LIBs [29][30][31][32]. Many researchers have since added ILs and lithium salts to escalate the ionic conductivity of PEO.

Xie et al. proposed an SC based on redox-active ILs by modifying the cations or anions with ferrocene to minimize self-discharge [33]. The modified IL-based SC exhibited an operating voltage of 2.5 V and an energy density of 13.2 Wh kg −1 , which was 83% higher than that of the unmodified IL-based SCs.

The electrochemical performance of SCs applied with [TEA][TFSI] mediated with hydroquinone (HQ) was studied and AC was adopted as an electrode for these SCs [34]. The specific capacitance was increased from 42 F g −1 to 72 F g −1 at 0.57 mA cm −2 when 0.3 M HQ was added to [TEA][TFSI]. The pseudo-capacitance contribution of HQ with the faradaic reaction of HQ/Q led to these results ( Figure 2 ).

The prototype ion gel electrolytes consist of ILs, organic solvents, and polymers, so-called gel polymer electrolytes of energy storage devices. In 1997, Fuller et al. reported an ion gel using PVdF-HFP as the polymer matrix [35][36]. The ion gel consisting of [EMI][BF 4], [EMI][CF 3SO 3], and PVdF-HFP achieved an ionic conductivity of 5.8 mS cm −1 . Ghamouss et al. presented a quasi-solid electrolyte that was combined methacrylate and dimethacrylate oligomers dissolved in [PMPyrr][TFSI] via free radical polarization, as shown in Figure 3 . The advantage of this incorporation is that the formed electrolyte can be used as a separator, is leakage-free, and provides a wide electrochemical stability window. The SC that used the prepared electrolyte showed a specific energy density of 16 Wh Kg −1 , a power density of 1.1 kW kg −1 , and coulombic efficiency of 99.9%. 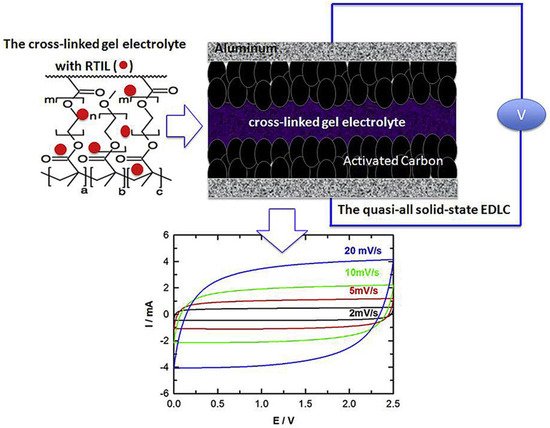 Figure 3. The scheme of the cross-linked gel polymer electrolyte that is composite with methacrylate and dimethacrylate oligomers dissolved in [PMPyrr][TFSI] followed by a cyclic voltammogram depending on scan rates. Reprinted 2011 from [64] with permission from Elsevier.