Non-alcoholic fatty liver disease (NAFLD) covers a wide spectrum of histopathological abnormalities ranging from simple steatosis to steatohepatitis (NASH). Algae represent a good source of proteins, vitamins, minerals and fiber. In addition, they are rich in a great number of bioactive compounds, such as peptides, pigments, phenolic compounds and fatty acids with potential applications in health, due to their antioxidant, antimicrobial, anti-inflammatory, anticancer, antidiabetic, antihypertensive, antihiperlipidaemic and antiobesity effect.

Hepatic steatosis is the most benign and common form of NAFLD that is defined as intrahepatic fat accumulation of at least 5% of liver weight. However, this condition can evolve to more advanced stages if hepatocytes are exposed to stress, causing cell death, apoptosis, inflammation and fibrosis and leading to NASH. This NASH can result in cirrhosis and hepatocellular carcinoma [1][2]. The prevalence of NAFLD shows a high variability, ranging from 6 to 35% in the general population. These rates are experiencing an upward trend due to the current epidemic of obesity [3] and type 2 diabetes [2]; in fact, about 50% of NAFLD patients and 80% of patients with NASH are obese [4].

Currently, there is no specific treatment for liver steatosis. The first step in its management consists of lifestyle intervention with caloric intake restriction and exercise. However, patients find it difficult to implement and achieve these lifestyle modifications. At present, no drugs have yet been approved, and pharmacological treatment devotes efforts to associated co-morbidities that contribute to the pathogenesis of NAFLD, such as, obesity, type 2 diabetes mellitus or dyslipidemia [4]. Due to the increasing prevalence and treatment limitations of NAFLD, there is an urgent need to seek new sources of bioactive compounds with potential preventive and/or therapeutic action.

The vast majority of algae extract effects have been studied in rodent models (Figure 1). 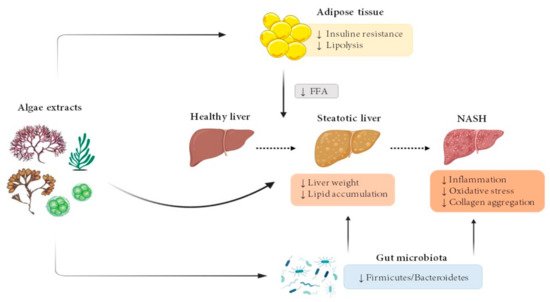 As far as we know, only four studies analysing the effects of microalgae extracts on NAFLD in animal models have been published to date. (Table 1).

To sum up, after reviewing the literature concerning the effects of microalgae on NAFLD, it can be pointed out that although the results reported are encouraging, the number of studies is still very scarce. In addition, the reported studies address the effects of different microalgae, and thus only one source of information is available for each one. According to the experimental design used, all the reported studies analysed the preventive effects of microalgae because these were included in the diet that induced liver alterations. Although in all of them microalgae improved several alterations, there is a lack of consensus on the specific effects observed. Thus, whereas the three studies that analysed this parameter reported a reduction of liver inflammation, only two of these studies described a reduction of liver triglyceride content (the other two studies did not find significant changes). Moreover, two of the studies analysed the effects of fibrosis and only one observed a significant improvement. In this scenario, further research is needed in order to assess the effects of microalgae on NAFLD.

Two green algae have been studied in the reported literature: Caulerpa lentillifera and Ulva prolifera (Table 2).

In summary, as in the case of microalgae, the number of studies addressing the preventive effect of green algae on NAFLD is still scarce. The three reported works (two of them carried out with Caulerpa lentillifera) revealed a reduction in hepatic triglyceride accumulation when animals were fed with a high-fat diet, but only one of the studies addressed several aspects of the potential mechanisms of action (insulin resistance, fatty acid and triglyceride metabolism, oxidative stress). In one of these pieces of research, the authors analysed the effects of seaweed supplementation on gut microbiota composition, but they did not establish a clear relationship between these changes and the effects on liver steatosis, just a significant correlation.

According to the reported studies, it can be concluded that the five red algae analysed were able to prevent liver triglyceride accumulation induced by diets rich in fat and those rich in fat and sugars. This positive effect is found in both rats and mice. The majority of the reported studies did not address the mechanisms of action involved in this effect. Interestingly, two studies that were focused on Plocamium telfairiae showed that the positive effects on liver fat accumulation were observed with quite different experimental period lengths (7 and 14 weeks).

Among the brown macroalgae, the most frequently analysed is Undaria pinnatifida, which has been demonstrated to be effective in both rats and mice after medium length and longer experimental periods. Nevertheless, in the three studies reported, where this type of alga has been used, the diets administered to animals were standard diets providing normal amounts of fat and sugars, the two nutrients that increase liver triglyceride accumulation. Consequently, further studies that make use of the diet that induces steatosis are needed to confirm the preventive effects of this seaweed. In the case of Sargassum thunbergii, this seaweed prevents the liver steatosis induced by a high-fat diet, in both mice and rats, in a dose-dependent manner.

To date, very little information aimed at analysing the effects of algae in humans has been reported. Ebrahimi-Mameghani et al. [24] carried out a double-blind, placebo-controlled, randomised clinical trial in 55 obese patients aged 20–50 years with confirmed NAFLD by ultrasonography. Individuals in the intervention group (29) received 1200 mg/day of Chlorella vulgaris dispensed in four tablets of 300 mg and 400 mg/day of vitamin E, whereas the placebo group (26) received 400 mg/day of vitamin E and four placebos for eight weeks. In this study, the only parameters related to the liver were serum transaminases, which did not yield differences between both experimental groups.

Taking into account that the susceptibility to develop NAFLD depends on genetic background, among other factors [26], it is important to address future studies devoted to analysing potential interactions of algae treatments with genetics and epigenetics, in order to established which subjects can get the most benefit, in the framework of personalised nutrition. Another factor with an important role in the development of NAFLD is gut microbiota [27]. Considering that several components of algae are able to modify microbiota composition [28][29][30], an interesting field of future research is to establish the relationship between these modifications and the improvement of NAFLD produced by algae.