Phlorotannins represent an important group of phenolic compounds, exclusively occurring in brown algae that can form simple structures of 126 Da to very large and complex polymers. Although the biosynthetic pathway of these compounds is still not consensual, it is known that they are formed via C–C and/or C–O–C oxidative coupling of several monomeric units of phloroglucinol, which in turn is known to be biosynthesized through the acetate–malonate pathway. According to the type of linkage formed between these units and the number of hydroxyl groups, phlorotannins can be classified in four sub-classes, namely phlorethols and fuhalols (ether linkages), fucols (aryl-aryl linkages), fucophlorethols (aryl-aryl and ether linkages), and eckols and carmalols (dibenzodoxine linkage).

Phlorotannins are essentially phenolic compounds biosynthesized exclusively by brown macroalgae that serve vital roles in their physiology including structural functions and cell wall rigidification, response to biotic stress (working as herbivore deterrents, algicidals and bactericidals), and abiotic stress (as photoprotective agents against ultraviolet radiation or as heavy metals chelators). They also participate in the regulation of cell functions and survivability, acting as antioxidants, and in the algal embryogenesis contributing for the zygote’s cell walls formation and avoiding multiple fertilizations by inhibiting spermatozoid movement [1][2].

During the recent years these compounds have gathered great interest due to their vast array of bioactive properties and benefits to human health showing promising effects against oxidative stress, photodamage, cancer, allergy, diabetes, obesity, inflammation, viral, fungal and microbial infections, and several others [13].

2. Biosynthesis and Chemistry of Phlorotannins

Although the exact biosynthetic pathway by which phloroglucinol gives origin to phlorotannins is not yet fully understood, it is known that this compound is biosynthesized by the acetate-malonate pathway, also known as polyketide pathway, in a process involving polyketide synthases-type enzyme complexes (Figure 1). It starts with conversion of an acetyl-CoA molecule into malonyl-CoA by the addition of a carbon dioxide molecule, changing the acetyl group into a highly reactive methylene that will allow the polymerization process to occur with low energy expenditure. The polymerization gives rise to a polyketic chain that transforms into a hexacyclic ring (triketide) via intramolecular cyclization with the concomitant loss of a water molecule. Because the triketide structure is not stable, the molecule tautomerizes into its aromatic form, which is thermodynamically more stable, giving phloroglucinol (1,3,5-trihydroxybenzene) [14]. Phloroglucinol then undergoes through oxidative coupling reactions with other phloroglucinol moieties forming polymeric structures that may range from simple molecules of 126 Da (1 phloroglucinol unit) to very large and complex polymers [15]. 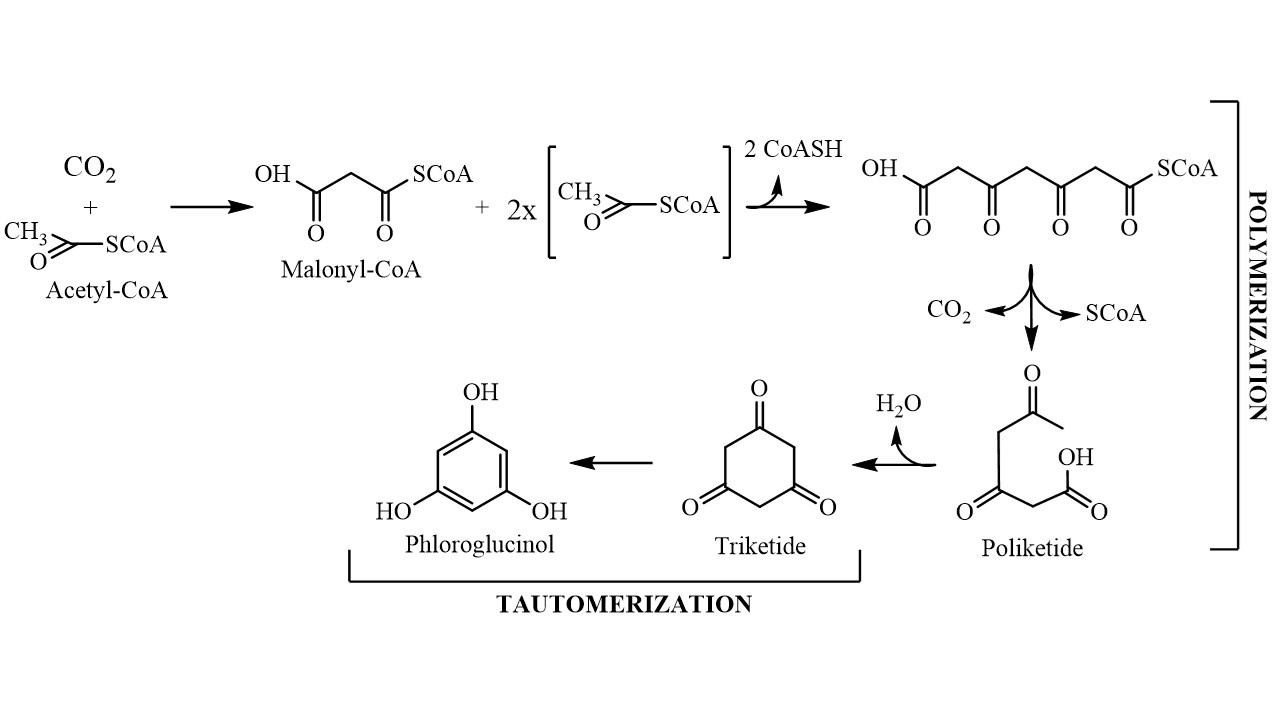 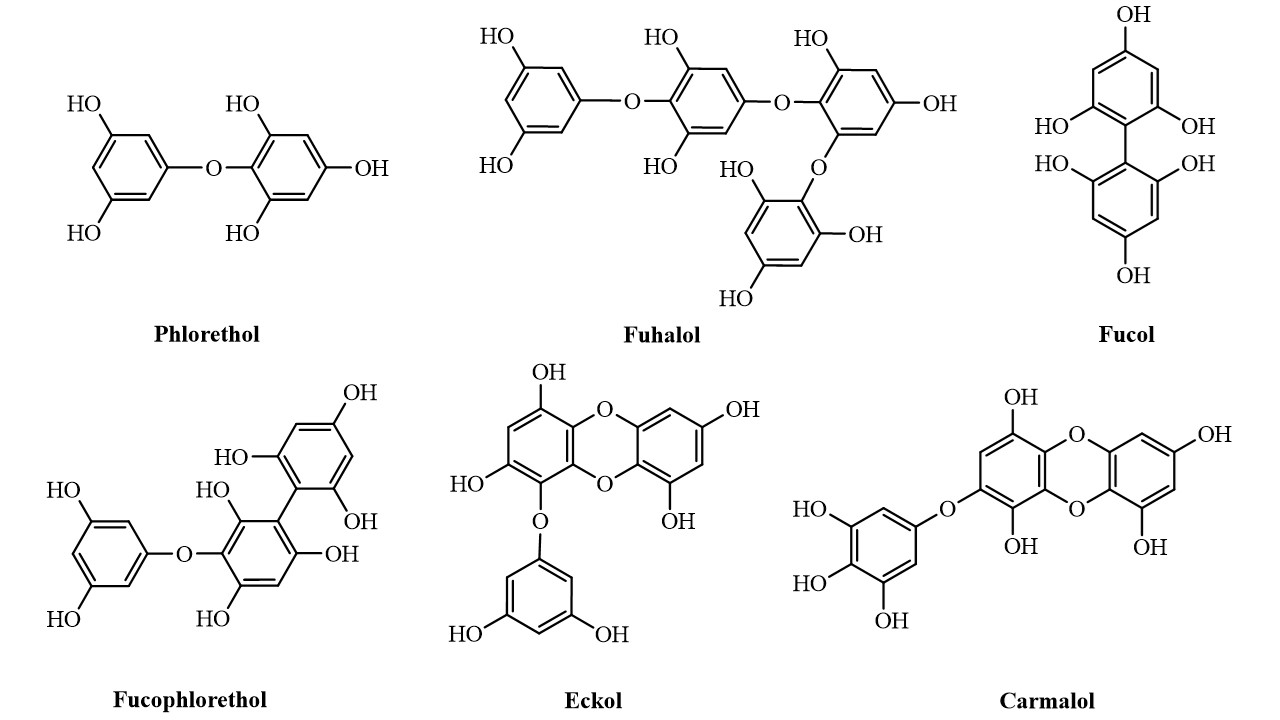 Figure 2.  Representation of the different classes of phlorotannins

3. Extraction, Purification and Quantification of Phlorotannins

The extraction of phlorotannins is a demanding task due to their chemical structure complexity, susceptibility to oxidation and interaction with other matrix components. Many factors, such as solvent composition, solvent polarity, time of extraction, temperature, solvent-solid ratio and particle size, may significantly influence the solid–liquid extraction (SLE) of phenolic compounds [17]. The protocols most commonly used for the extraction of phlorotannins are typically based on aqueous mixtures of acetone, ethanol or methanol, usually performed in acidic conditions, under nitrogen atmosphere or with solvents containing antioxidants such as K2S2O5 or ascorbic acid to prevent oxidative degradation [18]. Alternative methods such as pressurized liquid extraction (PLE), microwave-assisted extraction (MAE) or ultrasound-assisted extraction (UAE) have also been tested, although their applicability to routine isolation of phlorotannins is still not very common, due to the necessity of complex apparatus with limited capacities and/or high costs.

The purification of these compounds is usually carried out using solvent partitioning, solid-phase extraction (SPE) or column chromatography for polarity-based separation [19][20][21], or molecular size discrimination through dialysis or ultrafiltration steps [22][23][24]. Other methods have also been reported including cellulose adsorption [25], thin-layer chromatography [26] or even the combination of both polarity- and size-based approaches [23][27].

Monitorization of the total phlorotannins content in the extracts is usually carried out with the Folin-Ciocalteu method. However, even though phlorotannins are the major phenolic compounds present in brown seaweeds, several authors have reported the presence of other non-phlorotannin phenolic compounds in brown seaweeds. Therefore, this is not the most suitable approach since these minor phenolics, together with other unspecific reactions inherent to this colorimetric assay (e.g. with reducing sugars or ascorbic acid) may result in the overestimation of the phlorotannins levels. The most appropriate methodology for the specific quantification of phlorotannins is the dimethoxybenzaldehyde (DMBA) assay. In this reaction, the 2,4-dimethoxybenzaldehyde reacts specifically with the OH groups positioned at the 1,3- and 1,3,5-substituted phenols, thus being much less sensitive to the interference of other compounds. It can, however, form chromophores with some other non-polar compounds, although this issue can be easily surpassed with a defatting step prior to the DMBA assay [28].

As phenolic compounds, the most characteristic biological property of phlorotannins is their antioxidant activity, which has been extensively explored and is encompassed by a large number of studies in literature contemplating numerous phlorotannin-rich extracts or isolated phlorotannins from multiple algal species. Not only these compounds are capable of chelating metals and scavenging free radicals in the intracellular environment [29][30], but they also inhibit pro-oxidant enzymes and redox-sensitive mediators [31], and increase auto-antioxidant defenses through positive regulation of phase II detoxifying enzymes [32][33]. In many cases, their effects are even stronger when compared to well-known antioxidant compounds, such as ascorbic acid, α-tocopherol, butylated hydroxytoluene (BHT) and others [34][35][36].
Promising results have been observed in different cellular systems of oxidative stress as well, with several authors reporting a decrease of the intracellular ROS [37][38][39][40][41][42][43], DNA oxidative degradation [44][18][45][16][46][47] and myeloperoxidase activity [48][49] on cells treated either with phlorotannin-rich extracts or pure compounds. Likewise, in vivo experiments revealed that not only phlorotannins may prevent the intracellular ROS, lipid peroxidation, DNA damage triggered by multiple pro-oxidant stimuli including ethanol, CCl4, FeSO4-VC, 2,2′-azobis-2-methyl-propanimidamide dihydrochloride (AAPH), high glucose or UV-B radiation [50][51][52][12][11], but also stimulate the cellular auto-antioxidant defenses through upregulation of the expression of antioxidant and detoxifying enzymes such as catalase (CAT), superoxide dismutase (SOD), glutathione (GSH), GSH peroxidase (GPx), GSH reductase (GR) and GSH-S-transferase (GST) [53][54][55], via activation og the Nfr-2 signaling pathway [56]. Notably, a randomized controlled human trial revealed that after eight weeks of consuming 400 mg/day of an A. nodosum phenolic-rich extract, the DNA damage observed on obese subjects was improved [57].

Phlorotannins have also been closely related to the prevention of numerous inflammatory events, having the capacity to interfere with pro-inflammatory cytokines, regulate the expression and/or activity of important enzymes and even intervene in the transcriptional regulation. Many researchers have demonstrated that phlorotannins are capable of inhibiting the expression of cellular adhesion molecules, like ICAM-1 and VCAM-1 and key cytokines such as TNF-α, IL-1β and IL-6, as well as the release of NO● and PG2  and the expression of the enzymes responsible for their synthesis, i.e., iNOS and COX-2 [58][59][60][61][62]. Moreover, phlorotannins have been repeatedly shown both in vitro and in vivo to interfere with the transcriptional activity of NF-κB [63][58][64][65].

Alternatively, phlorotannins are also capable of activating the intracellular anti-inflammatory mechanisms, for example, via stimulation of the expression of IL-10, an important cytokine that is responsible for the supression of cytokines secretion [66].

The role of phlorotannins as anti-neoplastic agents derives from their capacity to interfer with multiple mechanisms of tumor development such as proliferation, vascularization and/or migration/metastization. Indeed, they have the capacity of stimulating the expression of several pro-apoptotic mediators including cytochrome c, Bak, Bax and caspases 3, 7, 8 and 9 [67][68][69], while inhibiting the expression of anti-apoptotic molecules such as Bcl-2, Bcl-xL XIAP and FLIP [69][70], thus triggering apoptosis and consequently cell death.
Phlorotannins were also shown to inhibit cobalt-chloride-induced adhesion, migration, and tube formation in HUVECs and vessel sprouting in rat aortic rings, demonstrating a great potential to inhibit tumor angiogenesis and motility [71]. Indeed, these compounds effectivelly inferfere with the expression of matrix metalloproteinase (MMP) 2 and 9, vascular endothelial growth factor (VEGF) and E-cadherin, representing important intermediates in the extracellular matrix processing and intimately related with tumor invasion and migration [72][73][74][75]. Moreover, evidences have shown that phlorotannins may also enhance the levels of tissue inhibitor of MMPs 1 and 2, thus contributing for maintaining the integrity of the extracellular matrix and preventing cell migration [74].

In conclusion, brown algae phlorotannins and phlorotannin-rich extracts are endowed with a high versatility and capacity to promote and improve health status by acting on different flanks, opening a path for possible innovations on different fields. In fact, some important steps have already been taken in this direction, which can be measured by the number of phlorotannin-related patents that have been slowly but steadily emerging over the last years, meaning that these compounds are indeed object of great economic interest. This strengthens the hypothesis that phlorotannins could be used as valuable naturally occurring pharmacological alternatives for the development of novel therapeutic strategies for treating not only cancer but also other diseases.