Advancing age is characterized by a progressive decline in multiple physiological functions, leading to an increased vulnerability to stressors and augmented risk of adverse outcomes [1][2][3]. During the aging process, several factors may affect body shape from both clinical and functional perspectives. Reduction in smell and taste senses, poor appetite (the so-called “anorexia of aging”), and decreased energy expenditure may all contribute to poor nutrition. Moreover, illnesses, medications, as well as poor oral health (for example, due to teeth loss and poorly fitting dentures) can exacerbate anorexia [4][5][6]. Nutritional status among older people may be also influenced by living or eating alone, poor financial status, dismobility, and decreased ability to shop or prepare meals [7][8]. Psychosocial factors including loneliness, sleep disorders, dementia, and depression are also recognized to have a negative impact on the dietary intake of older subjects [9].
Furthermore, with aging, there is a progressive loss in muscle mass and strength, whereas fat mass and fat infiltration of muscle increase [10][11]. Sarcopenia is the term, introduced for the first time in 1988 by Irwin Rosenberg, to indicate the pathologic reduction in muscle mass and strength leading to a poor function [12][13]. Interestingly, in recent years, it has been highlighted that sarcopenia is not limited to lower limbs, but is a whole-body process [14][15][16], also affecting the muscles devoted to chewing and swallowing [10][17], with a negative impact on food intake. In fact, atrophy of muscles critical for the respiratory and swallowing functions has been reported [14][18][19][20][21][22].
The variety of dental problems experienced by older people can result in chewing difficulties determining changes in food selection, thus leading to malnutrition and consequently to frailty [23] and sarcopenia [10][23]. Poor oral status may also predispose one to a chronic low-grade systemic inflammation through periodontal disease [24][25], which has an increased prevalence in those who are not able to perform the daily oral hygiene procedures [26], and it is a well-known risk factor in the pathogenesis of frailty [27] and sarcopenia [28]. Furthermore, periodontal disease has been associated with faster decline in handgrip strength [29], and recent studies showed an association between chewing difficulties and frailty [24].
Therefore, a hypothetical triangle oral status–nutrition–sarcopenia, exposing the older person to the frailty disabling cascade, may be suggested, as seen in Figure 1. 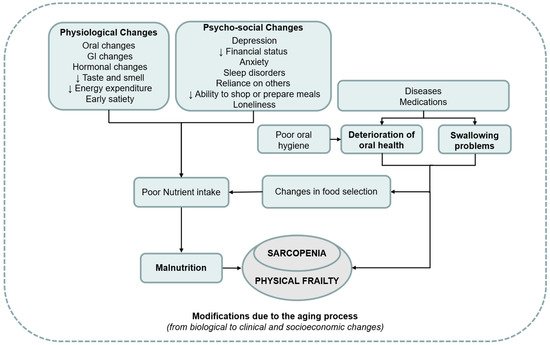 Figure 1. Overview of the interplay between poor oral status, malnutrition, and sarcopenia. GI—gastrointestinal.

Poor oral health is not an inevitable part of aging since good care throughout the life course can result in the maintenance of functional teeth later in life [24]. Throughout a lifetime, the oral cavity experiences a variety of physiological modifications, such as enamel changes, fractures lines and stains, as well as dentin exposure and darkening of the tooth. At the same time, in the inner part of the tooth, several changes, such as the deposition of secondary dentin reducing the size of the pulp chamber and canals, may also occur [30]. Furthermore, in older people, tooth wear is frequently observed, affecting more than 85% of all the teeth groups in both the mandible and maxilla [31]. Additionally, a loss in terms of elastic fibers in the connective tissue has been documented and, subsequently, the oral mucosa becomes less resilient [32].
However, older people, especially those who are institutionalized or with limited financial resources, may experience problems to access oral care. Furthermore, it has been documented that older people frequently have difficulty expressing complaints and assign low priority to oral health until dental problems become intolerable [33]. Oral problems among older people have been implicated in a high prevalence of tooth loss, dental caries, periodontal disease, xerostomia, and oral precancer/cancer lesions [34]. Periodontitis and dental caries are very common diseases, especially in older people, and are considered the main cause of tooth loss [35].
Around the age of 70, there is also a peak of root/cementum caries, as a result of both tooth retention and major exposure of these surfaces following periodontal support loss. Moreover, older people are at higher risk of periodontitis since it is a cumulative disease, especially with regard to the multirooted teeth [36].

The management of older people should be multimodal and multidisciplinary, especially for those with or at risk of malnutrition [79], in order to improve different conditions (i.e., oral problems and sarcopenia). From a practical point of view, comprehensive geriatric assessment (CGA) is the multidimensional, interdisciplinary diagnostic and therapeutic process aimed at determining the medical, psychological, and functional problems of older people. The CGA’s objective is the development of a coordinated and integrated plan for treatment and follow-up in order to maximize overall health with aging [80]. To date, increasing evidence suggests that prosthodontic treatment in combination with personalized dietary counselling may improve the nutritional status of patients [81].