Borreliae are a group of highly motile bacteria that are characterized by their corkscrew-like shape. They can be transferred by a tick bite to a human host and cause severe illnesses. Accordingly, an untreated infection with Borrelia burgdorferi can lead to the development of Lyme disease, which can affect the skin, joints, heart and nervous system. It is thus important to understand how borreliae interact with the human immune system, and which mechanisms lead to their depletion in the human body. Macrophages are part of the innate immune system and among the first cells that encounter invading borreliae.

Lyme disease or Lyme borreliosis is a multisystemic bacterial infection, manifesting primarily in the skin, the nervous system and joints [1]. It is the most common vector-borne illness in North America and Europe [2]. Lyme disease was first described as an epidemic form of juvenile arthritis in Lyme, Connecticut in 1976 [3]. In 1982, Willy Burgdorfer identified a spirochetal bacterium isolated from ticks of the Ixodes family, and from patient samples, as the causative agent. The spirochete was accordingly called Borrelia burgdorferi [4]. Borreliae are morphologically characterized as irregularly coiled spirochetes that are 10–40 µm in length and up to 0.3 µm in diameter [5]. They are highly motile, which is based on the presence of periplasmic flagella, and can reach velocities of up to 4.25 µm/s [6]. To date, 52 species of Borrelia have been identified, 21 of which are associated with Lyme disease [7]. Borreliae are mostly found in rodents and birds, and transmitted by tick bites, with infection of humans happening inadvertently [8]. In Europe and Asia, Borrelia afzelii, Borrelia garinii, Borrelia burgdorferi and Borrelia bavariensis are known to cause Lyme disease [9][10], while in North America, it is primarily caused by Borrelia burgdorferi [11]. New pathogenic strains are apparently emerging in Canada and the northern United States [12]. The group of Borrelia which cause Lyme disease is collectively referred to as the Borrelia burgdorferi sensu latu complex, whereas Borrelia burgdorferi as a species is addressed as Borrelia burgdorferi sensu stricto [10].
The course of Lyme disease can be divided into three distinct stages—the early localized infection, the early disseminated infection and late-stage Lyme disease—though the infection is not necessarily clinically apparent during all three stages [13]. In over 50% of cases, patients develop a painless skin rash called erythema migrans, which spreads in a characteristic ring-like morphology from the site of the tick bite 7–10 days after the infection [1]. Erythema migrans develops as a sign of the localized immune response and was shown to contain cells of the innate immune system, such as macrophages, neutrophils and dendritic cells [14]. Borrelia can enter the vasculature during the tick-bite and escape from the vascular system in a multi-step process comprising tethering, dragging, stationary adhesion and extravasation, leading to the distribution of the pathogen throughout the body [15]. Depending on the genospecies of the infections, roughly 5–60% of untreated erythema migrans progress into systemic infections, which can be divided into early disseminated infections and late-stage Lyme disease, according to the duration of symptom persistence [1][13]. Of note, ~50% of patients in the disseminated stages of the infection report no prior erythema migrans [1]. Common manifestations include arthritis, carditis and neuroborreliosis, with variations in frequency depending on the underlying genotype of the infection [13]. In some cases, subjective symptoms such as fatigue, cognitive difficulties, myalgia and arthralgia persist for a significant period of time even after antibiotic treatment. The underlying etiology of the so-called post(treatment)-Lyme disease syndrome is not fully understood. Possible explanations range from microbial persistence or immune dysregulation to altered neural networks [16][17].
The immune response of the host is an important factor for preventing development or progression of Lyme disease. Of note, skin biopsies from erythema migrans are enriched in macrophages, neutrophils and dendritic cells [14]. These cells are part of the innate immune system and are thus the first line of defense against the infection. Here, we focus on the role of macrophages in the elimination and potential persistence of Borrelia in the human host.
To successfully eliminate borreliae, macrophages have to perform a series of finely tuned processes (Figure 1). At first, the immune cells need to recognize, capture and immobilize the highly motile Borrelia cells [18]. To achieve this, macrophages initially form rigid actin-rich protrusions called filopodia that contain closely-bundled, unbranched actin filaments [19][20]. Subsequently, a more flexible actin-rich structure, the coiling pseudopod, wraps around the captured bacteria and pulls them into the phagosome, a special compartment derived from the cell membrane. The early phagosome then matures progressively into the late phagosome and the phagolysosome. This process is accompanied by the compaction of the elongated spirochete [21], by progressive acidification of the compartment and the acquisition of lytic enzymes. These steps and the respective molecular mechanisms will be discussed in the following section. Please note that the term “Borrelia” in this entry refers to members of the Borrelia burgdorferi sensu latu complex, especially in the context of Lyme disease, and not to other species such as B. recurrentis or B. miyamotoi that cause other infectious diseases. It is likely that several of the described mechanisms also apply to these other Borrelia species, but this has not been formally proven yet. 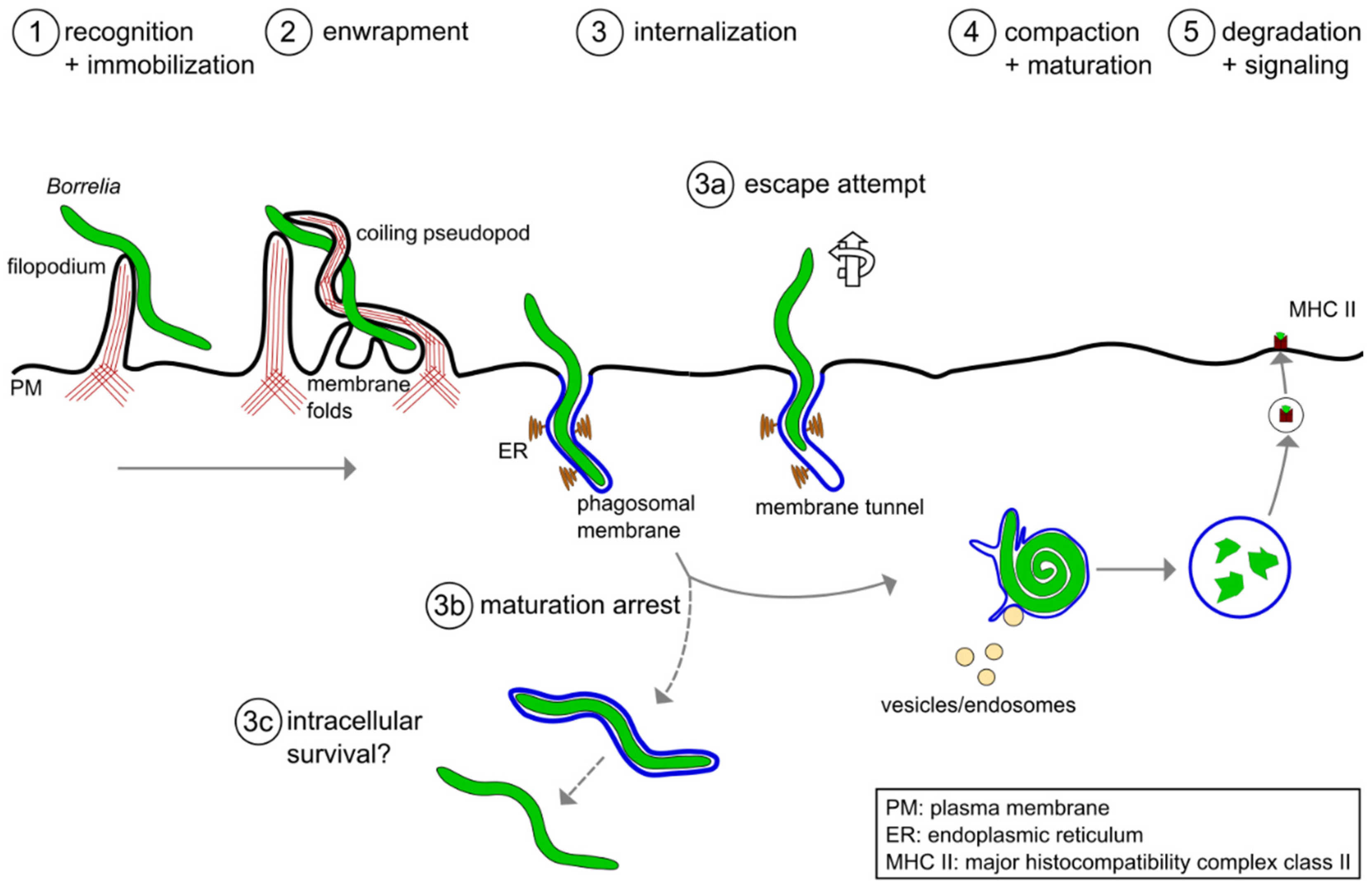 Figure 1. A model of the phagocytic uptake and intracellular processing of Borrelia by macrophages. (1,2) Actin-rich uptake structures. (1) Filopodia immobilize motile Borrelia at the host cell surface, with (2) subsequent enwrapment by a coiling pseudopod. (3) Borreliae are taken up into a plasma membrane-derived compartment, the phagosome. The phagosomal membrane loosely follows the spirochete morphology and contacts the endoplasmic reticulum (ER) at multiple sites. (3a–3c) Potential deviations from the regular pathway of internalization and processing. (3a) A subset of borreliae partially extract themselves from the nascent phagosome, resulting in the formation of membrane tunnels. (3b) A subpopulation of borreliae lose the phagosomal membrane and retain their elongated morphology, (3c) leading to increased survival in the host cell. (4) The elongated spirochete is compacted into a globular structure within the phagosome. This is initiated by contact with endocytic vesicles, which leads to local membrane tubulation and thus shrinkage of the phagosomal surface. (5) Borreliae are degraded within mature phagolysosomes. Subsequently, complexes consisting of MHCII and pathogen-derived peptides are exposed on the cell surface for antigen presentation.

As Lyme disease is the most common tick-borne disease in North America and Europe [2], it is important to understand the underlying pathology. The host immune response against the causative agent, Borrelia spirochetes, is a crucial part of the defense against the disease. As professional phagocytes, macrophages play an important part in the attempt to eradicate the pathogen. Moreover, recent research has uncovered important molecular mechanisms involved in the uptake and initial processing of borreliae. The phagocytic process of Borrelia thus consists of multiple steps: (I) recognition by surface receptors, and capturing and immobilization by filopodia; (II) internalization by coiling pseudopods; (III) compaction in phagosomes; (IV) degradation in phagolysosomes; and (V) antigen presentation on MHC II complexes. Both dysregulation of individual steps during this process, and potentially also active evasion mechanisms employed by Borrelia, could be involved in the pathogenesis of the disease.
Still, the molecular mechanisms behind many steps in the cascade of the intracellular processing of Borrelia are only incompletely understood (Figure 2). These include (1) the roles of the ER and phagosomal phospholipids in phagosome maturation, (2) the observed relevance of the compaction process for phagosome maturation, (3) the likely involvement of alternative pathways in this phenomenon that are independent of the described Rab22a–Rab5a–SNX3–galectin-9 axis, (4) the mechanisms regulating membrane tubulation and abscission at phagosomes, (5) the mechanisms involved in loss of the phagosomal coat of a subset of internalized borreliae, (6) the likely involvement of additional regulators and vesicle populations in phagosome maturation, (7) the mechanisms regulating membrane fusion between vesicles and maturing phagolysosomes and (8) the nature of the degradative machinery within mature phagolysosomes. 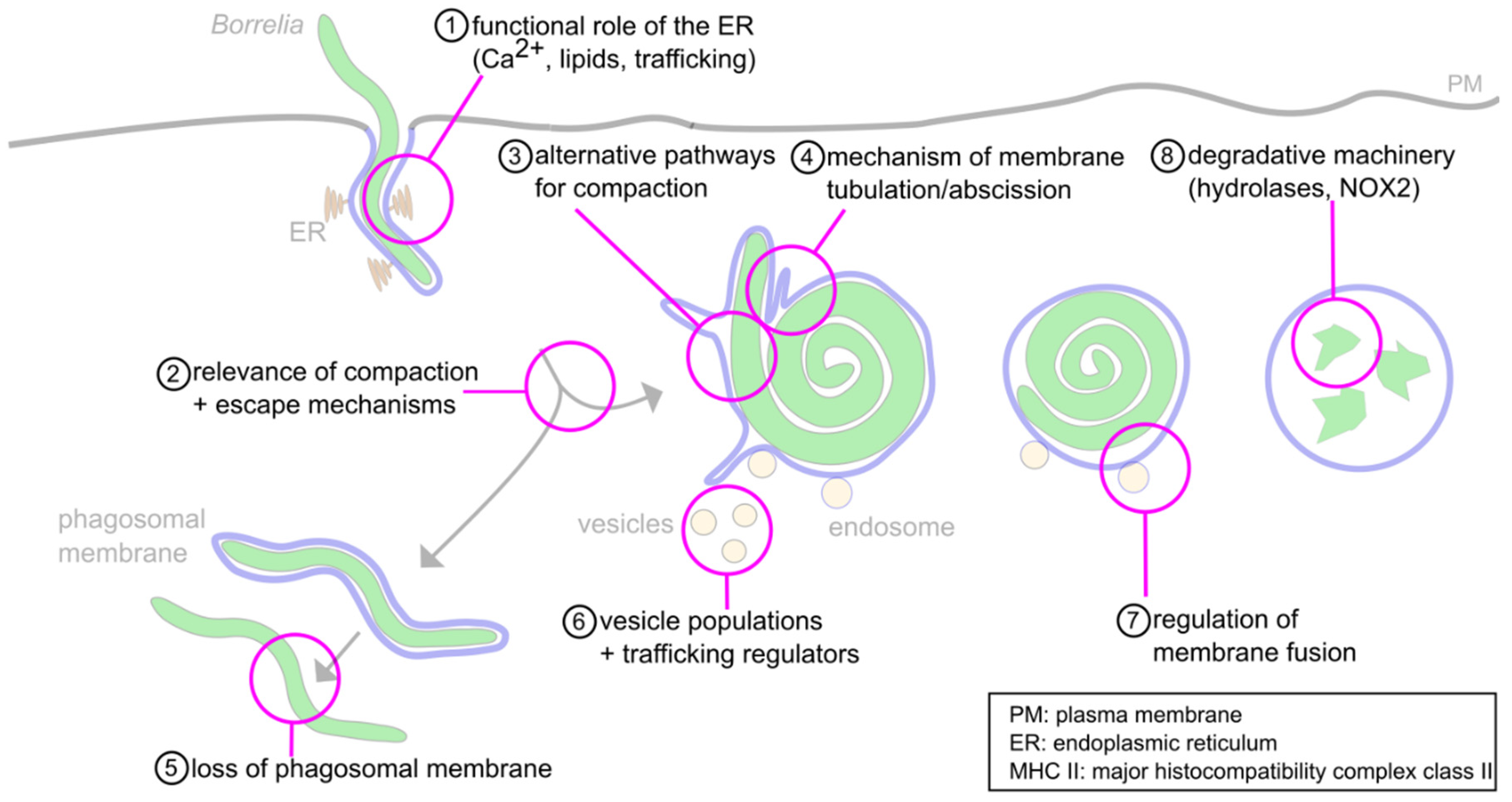 Figure 2. Open questions about the intracellular processing of Borrelia. (1) The functions of the ER-phagosome contact sites during phagosome compaction and maturation are still unknown. Likely functions concern Ca2+− signaling, lipid transfer and regulation of trafficking. (2) The relevance of phagosome compaction for further phagolysosome maturation has been documented. However, the molecular basis for this requirement is unclear. (3) While some regulators of compaction have been identified, their individual or combined depletion leads to only a 50% reduction of compaction, indicating the likely involvement of alternative pathways. (4) Compaction is accompanied by the extrusion and abscission of membrane tubules; however, the underlying molecular mechanisms are unclear. (5) A subpopulation (1–5%) of Borrelia lose the phagosomal membrane and retain their elongated morphology. The mechanisms for this process, and its potential importance for survival in the host, are unclear. (6) The phagosome is contacted by Rab5a/SNX3 and galectin-9/flotillin-2 vesicles. Involvement of other regulatory cargo proteins and lipids, along with further vesicle populations, is likely but unproven. (7) The interaction between vesicles and the phagosomal membrane likely happens in a “kiss-and-run” fashion. The molecular mechanisms are unknown. (8) The degradative machinery is well described for other phagocytic targets. However, it is unknown whether the same enzymes, such as cathepsins and NOX-2, are also involved in proteolytic processing of Borrelia.
Apart from the usual suspects, other players seem to be involved in the processes related to phagocytosis, as new proteins have been found within or in the proximity of phagosomes [22], and functional roles have been documented for some of those proteins. An emerging but so far underappreciated, field concerns the metabolic pathways of the host cell. With the topic of immunometabolism gaining more prominence in recent years, further research in this area, especially in the context of pathogen processing, and specifically Borrelia elimination, seems promising.
In summary, closely regulated changes in phagosomal morphology and composition are central for the successful elimination of Borrelia. Accordingly, several regulators of intracellular trafficking have already been linked to this process, but many more might be involved. Additionally, borreliae have emerged as being far from passive targets, which actively counteract their capturing and internalization by immune cells. It would thus be highly interesting to see whether borreliae also employ more active mechanisms to influence their intracellular processing and how these could contribute to the pathology of Lyme disease.